The 2019 Rolex 24 Hours at Daytona has been red flagged with seven hours and 14 minutes to go, following a lengthy safety car period after heavy rain arrived at the circuit in Hour 14.

The organisers tried to keep the cars running, but the conditions didn’t improve after over an hour of running under FCY conditions, so the race was stopped and the cars came into the pit lane and were covered by the teams.

This isn’t the first time that the Rolex 24 Hours has been red flagged. The last time the race was stopped for rain was back in 2004, when heavy rain resulted in Goodyear running out of full-wet DP tyres. 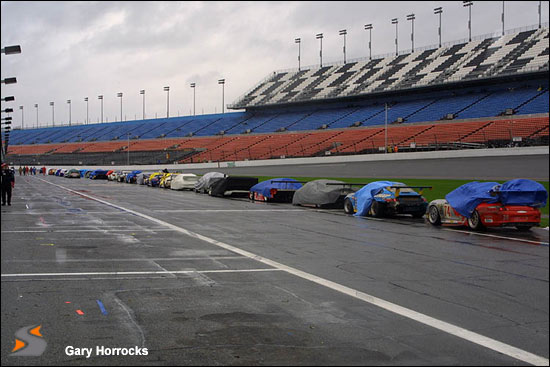 As it stands, the #10 Wayne Taylor Racing Cadillac leads the way, after an astonishing run by Fernando Alonso when the rain first came, which saw the Spaniard climb from fourth to first as the conditions worsened with nine hours to go.

“Why are we under yellow? It’s just not right. It’s silly.” Wayne Taylor said before the race was stopped.

“Conditions are quite bad, it’s raining a little heavier now,” Alonso added after the race was red flagged. “For me maybe it’s ok, the visibility is ok. But if you’re running with cars in front it’s hard with aquaplaning and standing water. Now it’s even heavier, let’s see. It’s better to stop.”

Bo Barfield, IMSA’s race director said: “As you’ve probably seen we’ve just had a situation that we had to stop the role 24 at Daytona we had a predicted weather storm that we know was coming in and we know that was going to hit around 4 or 5 am. We kept racing for a while but ended up having to go full-course yellow due to track conditions.

“We made our best efforts to stay on top of it and keep ahead of the puddling, but the rain relented for long enough that there was no way we were going to get a track back so we decided to sit it out for a while, throw a red flag, and take a break, see what we can get when we get a little daylight on it with the sun coming up in terms of assessment and go back at another cleaning and drying program and see if we can get the race restarted as soon as possible.”

Second and third are the two Penske Acuras, the #6 leading the #7, with the #31 Action Express Racing Cadillac. Since the halfway mark, the top four cars mentioned have become the only real contenders left in the DPi class, after the #55 Mazda dropped out of the running in Hour 13. Olivier Pla had contact at the West Horseshoe following a spin, which knocked one of its tyres out of line. 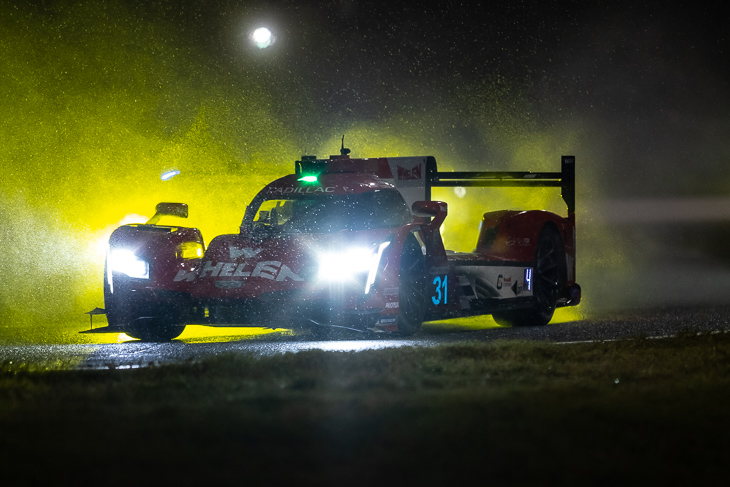 In LMP2, the rate of incident for DragonSpeed, PR1 and Performance Tech has left us with a spread-out field, the #81 DragonSpeed ORECA leading the class over the sister #18 car (which has had multiple issues and offs) and by three laps. Performance Tech’s 07 is six laps down.

GTLM sees Risi Competizione up front, the car looking strong as the rain began to come down, Alessandro Pier Guidi the man currently aboard. 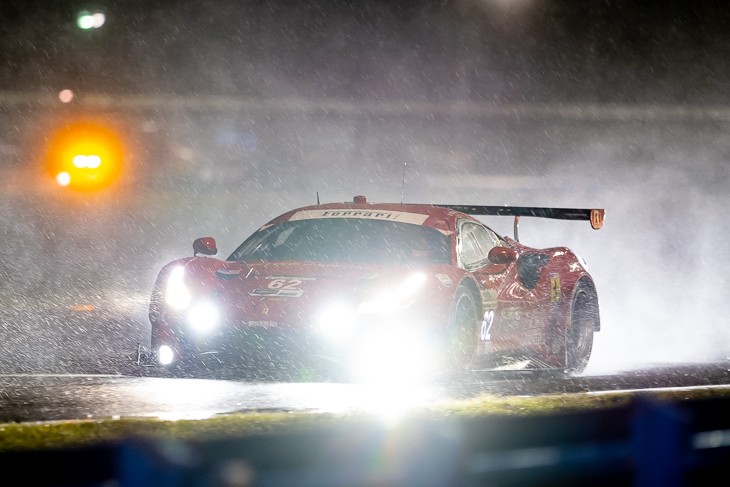 Second is the #912 Porsche, which has recovered well thus far from its early brake issues, sitting ahead of the first of the Ford GTs, the #66 of Joey Hand. The top six in the class are still on the lead lap, behind the #66 and still in the hunt if we go green again are the #911 Porsche, #67 Ford and #25 BMW.

The FCY which led to the Red Flag was called after a big incident involving the #4 Corvette, the sole-remaining GM GTLM car in the running for the win. Tommy Milner lost the car’s rear heading into Turn 1, and was a passenger, aquaplaning off into the tyres.

This came after multiple offs for other runners, including the recovering #5 Action Express Cadillac (which suffered heavy rear-end damage from a shunt) and the #18 DragonSpeed ORECA which had two offs into barriers with Ryan Cullen driving.

UPDATE 1: 08:50am, IMSA is preparing to try and get the race underway again at 9am, though one would expect there to be a lengthy safety car period, should the conditions improve enough for the race to go green once again.

UPDATE 2: The restart after the lengthy red flagged proved to be an eventful, but short-lived one. The #46 Ebimotoros Lamborghini Huracan GT3 was slow on the front stretch and was hit by the #9 PFAFF Motorsports Porsche 911 GT3 R. Zacharie Robichon came across the slow #46 Lamborghini with considerable speed, the spray on the restart undoubtedly hampering the vision of the Canadian. Heavy damage was done to the right rear of the #46 Lamborghini and the left front of the #9 Porsche.

The #48 Paul Miller Racing Lamborghini Huracan GT3 was also involved in the same incident, that car though suffered the least amount of damage. Ryan Hardwick nursed the car all the way back to pit entry before it came to a halt and was later recovered.

We’re now back to FCY, with the rain continuing to come down.

UPDATE 3: We went green again with just under four hours to go, but again, cars flying everywhere, and we’re back to yellow with three hours and 30 minutes remaining after multiple incidents. The most notable collision came at Turn 1, the #911 Porsche sliding into the side of the GTLM leading #66 Ford, destroying its rear end, sending it flying into the #11 Grasser Racing Lamborghini.

The CORE Nissan DPi, then up to fourth, also had an off, into the barriers backwards. The Black Swan Porsche and Land Audi were also seen spinning off track in the rain.

In GTLM, it’s now James Calado at the helm in the Risi Ferrari, ahead of the #912 Porsche of Earl Bamber and the #25 BMW of Augusto Farfus.

LMP2 is still led by DragonSpeed’s #81 ORECA, and the #12 AVS Lexus leads GTD. We’ve had about 20 minutes of green flag racing in the last five and a half hours here.

UPDATE 5: Another short green with two hours and 34 left, this time it’s the WeatherTech Racing Ferrari that falls victim to the weather, Toni Vilander running into the back of the Black Swan Porsche, which after watching the onboard, seemingly came out of knowehere due to the low visibility caused by spray at the Bus Stop. Another yellow while the marshalls clean up the mess, just three mintues after the last green.

More news on the situation trackside as we get it…