The initial 41-car entry, already reduced to 40 after the withdrawal yesterday of one of the Ginetta G55 Class C cars saw a further reduction to 38 today.

That followed a morning of incidents that accounted for two Class A cars in different accidents and saw another team scrambling to repair their Class A car.

First to hit trouble was Pete Storey in Free Practice 1 in the #3 Audi that he was set to share with BTCC stars Matt Neal and Gordon Shedden. Storey lost control at the exit of The Chase, the Audi impacting the wall on the outside and sustaining chassis damage that cannot be fixed here, the car withdrawn by the team soon afterwards.

By far the most serious incident of the day befell Tim Pappas aboard the #540 Black Swan Porsche 911 GT3 R in Free Practice 2, Tim seeming to run wide to allow a faster BMW to pass in the Chase and losing control of the car, the car sliding off track and impacting the wall hard with the rear of the car.

There was a brief fire (see below), the car very heavily damaged with Pappas requiring assistance to get out, being despatched to the local hospital for checks and thereafter airlifted to Sydney with suspected fractures.

Huge shunt for Pappas in the #540 Porsche. Hope he is ok. #B12HR pic.twitter.com/qKvt8V4ZjI

There was no little controversy after reports and photographs emerged of at least one spectator fighting the fire had reportedly taken the extinguisher from a manned marshals post. Responding to the reports CAMS and Supercars Events, the promoter of the Bathurst 12 Hour, reported that they “are investigating the incident and subsequent response to the accident involving car #540 this morning.

“Once the relevant information is attained the incident will be fully reviewed by CAMS, the body responsible for track safety, marshals and officials at the event.

“Supercars Events will assist in the review process in consultation with track management.”

The #540 car is a write-off and became the second withdrawal of the day.

After FP2 returned to green flag running there was a further major shunt, Shane van Gisbergen’s #888 AMG hitting the rear of Paul Dalla Lana’s #51 Porsche, pitching the 488 into the wall to the outside, major damage the result for the front end of the Ferrari, the AMG half spinning to the inside and demolishing the marker boards leading to pit in.

Van Gisbergen is seen on the video here running across the track to check on Dalla Lana immediately after the incident.

Luckily there was no chassis damage for the Ferrari but repairs saw the car sidelined for the rest of the day, Dalla Lana singularly unimpressed with the response to the incident from the Stewards – the AMG was back in action by FP3 after a new splitter was fitted.

Fastest time of the day overall came in Class A for the #999 GruppeM/ Mann Filters AMG, Raffaele Marciello posting a 2:03.588 in FP4. 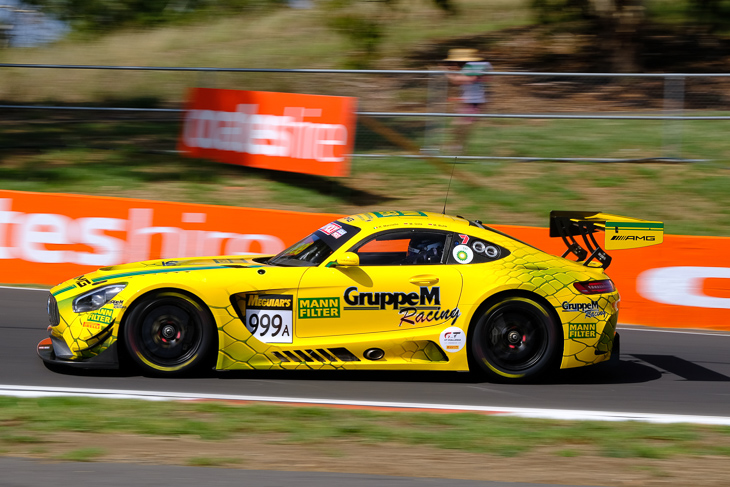