The 2019 GT Open grid is nearing completion, with the season opener fast approaching. Last weekend 24 cars hit the track at Paul Ricard for the first of two official winter tests.

SPS Automotive’s Mercedes AMG GT3 of Miguel Ramos and Fabrizio Crestiani ran fastest across the two days in the south of France with a 2:01.995 during the third session on the second of the two days of running.

However, the real interest at the test was not the pace of the tried and tested AMG GT3, but the newer machinery on show from Optimum Motorsport and Teo Martin.

Optimum, which announced this week its two-class British GT programme with a new Vantage GT3 and a pair of Vantage GT4s, tried its GT3 example in the south of France. 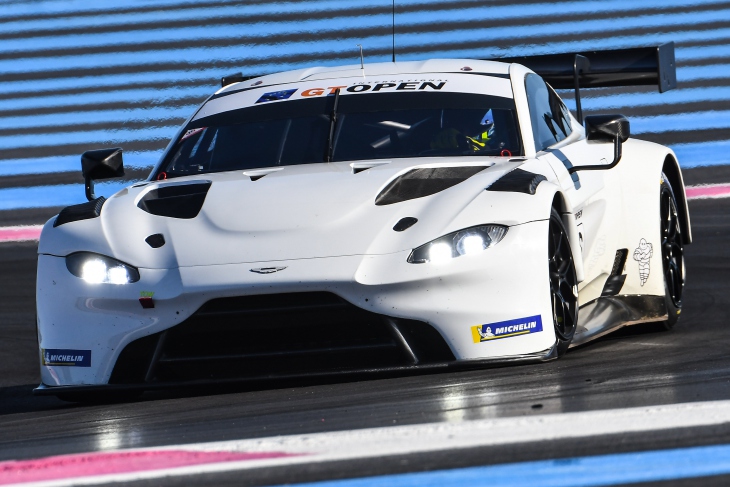 Oliver Wilkinson and Bradley Ellis, who will share a Vantage GT3 with Optimum in British GT, were aboard for the test. Despite missing most of the second-day action, they still managed plenty of laps, 67 of them on Day 1 with a best time of 2:05.220 to go seventh fastest, before setting a 2:03.985 in the opening session of Day 2 to slot in eighth. As a whole, the best times of the test came on the second day. Behind the Crestiani-Ramos SPS Mercedes in the combined times was the sister car of Valentin Pierburg and Tom Onslow-Cole which ended up with a 2:02.129.

Third in the overall ranking across the two days meanwhile, was another AMG GT3, making it a 1-2-3 for the German marque, the #72 Lechner Racing example driven by Mario Plachutta and Thomas Jäger, which came in half a second off the top time.

The first of the other chassis represented was the #5 Olimp Racing Audi R8 LMS of Marcin Jedlinski and Mateusz Lisowski, down in fifth, below the #8 Antonelli Mercedes which made it a Mercedes lockout of the top four spots.

The R8 finished up the weekend eight tenths off the best time. One team that didn’t feature at Ricard, but will return to the series this season after announcing a programme earlier this week was Ombra Racing. The Bergamo-based outfit will run with a new Huracan GT3 EVO in GT Open, alongside its Blancpain GT Endurance Cup commitments in what will be its 25th year of competition.

“2019 is an important year for us: not many teams can celebrate 25 years of history and we are of proud of this achievement,” said team manager Davide Mazzoleni. “We come from a solid season on both the technical and the sporting side, closed in good style in Barcelona, and we want to start from there. We are aware that the new Huracán EVO will require dedicated development, but we have a very high-level team ready to start working.”

Its driver line-up will be revealed soon.

Next up on the GT Open winter schedule is a test at Barcelona on the 8-9 of March. The first round of the 2019 season follows the test in Spain on the weekend of the 27-28 of April.