Acura Team Penske pipped Mazda Team Joest to pole position for the 67th running of the Sebring 12 Hours tomorrow. Dane Cameron was the man of the hour, with a 1:45.865 on his second flying lap in the session driving the #6 Acura DPi which set the pace in FP4 this morning.

“It’s pretty cool, nothing better than the view from the front,” Cameron said. “Our guys were here working until 2 am. Really proud of this effort. It’s been a while since I’ve been able to do this (his last pole at Sebring back in 2014). We’ve really improved in Year 2, I’m ready to go.”

That time went unbeaten for the rest of the session, though Tristan Nunez did come close in the #77 Mazda, but his 1:46.011 was only good enough for the second spot.

The second Acura will start in third on the second row, with the first of the Cadillacs, the #5 Action Express DPi VR fourth.

In the LMP2 ranks, it was really close, with the two ORECAs going back and fourth in the battle for the class pole. Matt McMurry, with a last ditch effort, took the top spot, the American in the PR1 ORECA beating out Kyle Masson in Performance Tech’s 07 by 0.011 with a 1:49.728 on his final flying lap.

“It’s going to be a good race, we’re evenly matched, I’m sure we’ll be going back and fourth the whole race,” McMurry said.

Notably, both LMP2 ORECAs finished above the CORE autosport Nissan DPi in the times, the retro-liveried car struggling with an issue that left it four seconds off the pace.

Porsche locked out the front row in GTLM, with stunning laps from Patrick Pilet and Laurens Vanthoor. Pilet was the quicker of the two, the Frenchman setting a 1:55.899 in the #911, to give him and his teammates pole for the 67th 12 Hours. “It’s a long time since my last pole. The car was well balanced, we made adjustments, we struggled early but we’ve found a good set up. On my lap, I went a bit off at Turn 1 and thought maybe it wasn’t going to be good, but clearly I didn’t lose much time,” Pilet said.

Of the other factory teams, Corvette Racing came closest to securing a front row spot, its #3 C7.R of Antonio Garcia ending with a 1:56.158 from Antonio Garcia, who set the fastest single lap in GTE qualifying for the WEC runners last night.

It looked to be a Corvette 3-4, but Richard Westbrook split the two C7.Rs with a 1:16.189 to go fourth, pushing Tommy Milner in the #4 Corvette fifth.

The two BMWs ended up sixth and seventh.

Before the DPi/LMP2 session, Acura proved to be the brand to beat in GTD as well as Prototype. Trent Hindman posted the week’s first sub-two-minute lap to take the IMSA GT pole. 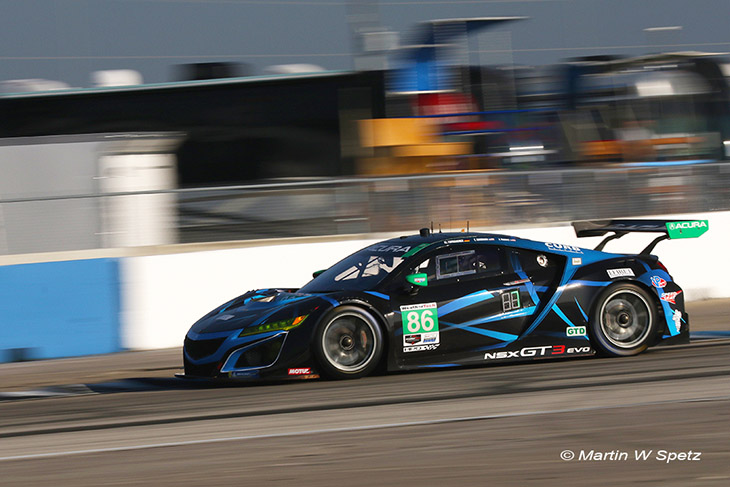 The young American got straight down to business from the start, the #86 Meyer Shank Racing Acura NSX GT3 setting the time of 1:59.917 on his second lap. Robbie Foley was 0.084 seconds away to place the #96 Turner Motorsport BMW M6 alongside on the front row.

The first row was unchallenged but third and fourth was some contest throughout the short 15-minute session. Zacharie Robichon’s #9 Porsche 911 deposed Brandon Gdovic’s repaired PPM Lamborghini, placing the Pfaff Motorsport 911 GT3R third with a 2:00.504.

Gdovic’s time wouldn’t stand though as Rolf Ineichen put the #11 GRT Grasser Lamborghini (which had to be hastily mended after a shunt in FP4 this morning) through into fourth on his final lap.

“I think when I did my Skippy three day here 10 years ago, I didn’t think I’d be standing here today,” Hindman said.

“I’m learning so much from this team, all my teammates. It’s a result of hard work and long hours. We made a lot of changes to the car last night, I’m glad I could deliver a result they could be proud of.”