We’re halfway through the Sebring 12 Hours, and contenders are beginning to emerge in each class.

Up front, Action Express continues to lead the way, its #31 Cadillac leading through stints from Felipe Nasr and Eric Curran before Pipo Derani climbed in for the run to the halfway mark.

At the end of the sixth hour though, a tussle for the lead broke out, after Jonathan Bomarito in the sole-remaining Mazda DPi had spent his stint climbing the order to second. He managed to get within striking distance of Derani, and briefly took the lead for the first time.

But it wouldn’t last. Rain began to come down again, and immediately the American struggled for front-grip, Derani cruising back past him at Turn 17 and pulling away. Bomarito then made a costly error trying to hold second, putting a wheel on the grass on the run to Turn 10, going head-on into the tyres.

“It was my fault, I feel bad for the guys,” admitted Bomarito. “We needed a new nose, we’ll see if there’s suspension damage. Now we need to be lucky with yellow. I’m really bummed for the crew.” 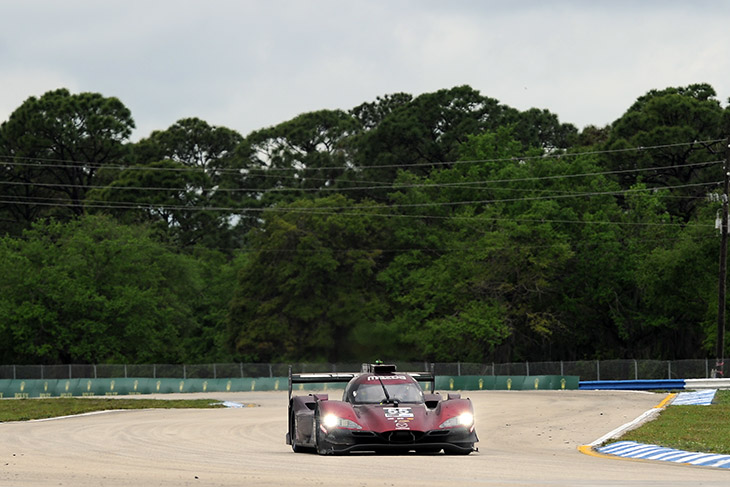 Luckily, the car wasn’t too damaged from the impact, and during the FCY he was towed out and was able to get back to the pits. The car needed a nose change, losing the car two laps. On the other side of the Mazda pit, however, the #77 rejoined the race at the six-hour mark, after its lengthy spell behind the wall for repairs following its cockpit fire.

This leads it as a Cadillac 1-2-3-4 up front now, with the sister AXR #5 Cadillac second after the flurry of stops during the FCY, the #10 Wayne Taylor example third and the #84 JDC Miller fourth.

The Penske Acuras meanwhile, continue to be invisible, the #7 fifth and a lap down, and the #6, which had to undergo a steering wheel change at a stop earlier in the race, ninth four laps down. The CORE Nissan is also having a quiet run, the car now seventh.

LMP2 continues to be no contest, Performance Tech’s ORECA in the lead and cruising after the PR1 ORECA’s suspension issue in the opening hours.

Ryan Briscoe pushed on in the lead through hours four to six, the #67 Ford GT setting a new fastest lap at 1:57.478, ahead of the improving Sebastien Bourdais in a Ford 1-2. The field was more spread after the next round of stops, a window of 42 seconds covering the top four, Eng’s third place in the #24 BMW 25 seconds ahead of the #3 Corvette which had led briefly with Jan Magnussen.

Oliver Gavin’s troubles were not showing any sign of improvement in the #4 Corvette, which was now nine laps down on the leading Ford.

As the halfway mark approached, there had been a couple of hours of relative stability. Scott Dixon had doubled the lead for the #67 Ford. 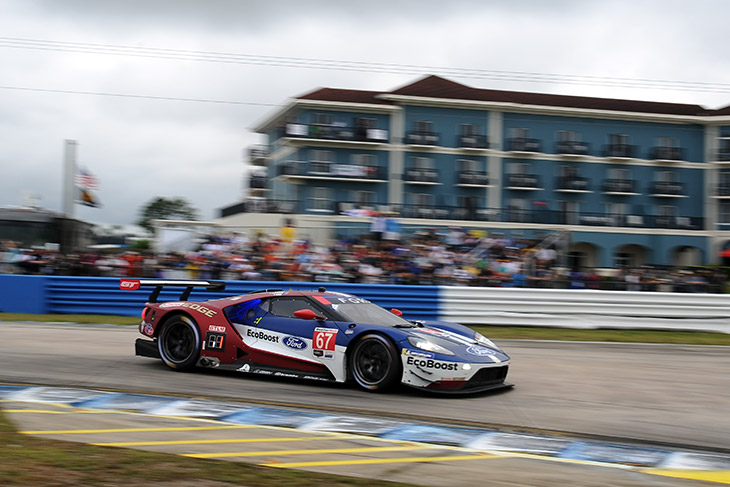 At a second per lap, Dixon had pulled some 20 seconds clear of his teammate Joey Hand. John Edwards was running a lonely race in the #24 BMW, nearly 50 seconds off the Fords and 11 seconds in front of Mike Rockenfeller’s Corvette.

The #25 BMW, now in the hands of Connor De Phillippi, held station half a minute off the ‘Vette. But the really interesting improvement had come from Fred Makowiecki in the recovering #911 Porsche. The French driver had pushed on hard and had hauled the car back in touch with the lead lap.

Then the rain came in again, bringing with it the FCY as the remaining Mazda DPi found the tyre wall.

Significantly, everyone headed for the pits with the exception of the #911 Porsche, Fred Makowiecki staying out and getting back on the GTLM lead lap. His teammate Laurens Vanthoor wasn’t so lucky, driving around the Safety Car and into the pit lane, unable to exit and losing the opportunity.

Leading the GT Daytona class is the #11 GRT Grasser Racing Lamborghini Huracan GT3 Eve of Rik Breukers. The 2019 Rolex 24 Hours at Daytona winners continue to look in a good position to sweep the 36 hours of IMSA running in Florida this year.

Second, in the class at the halfway mark is the #9 Pfaff Motorsports Porsche 911 GT3 R with Scott Hargrove. He had a nearly six-second lead out in front of the class when the Full Course Yellow and subsequent safety car for the #55 Mazda came out but dropped to second in the pits.

One car making good work out of the most recent pit cycle was the #44 Magnus Racing Audi R8 LMS GT3. It picked up a handful of spots and now has John Potter behind-the-wheel.

The only incident in the prolonged period of green flag running came when the #14 AIM Vasser Sullivan Lexus RC-F GT3 of Philipp Frommenwiler made contact with the back of the team’s sister car in the #12 RC-F GT3.

Frankie Montecalvo was in the #12 Lexus which sustain minor right rear bodywork damage when he was hit in the back. The #14 Lexus got the worst of things with reasonably significant damage to the left front, the car now 11 laps off the back of their class.