Under friendly skies on a Saturday afternoon, the Pirelli Super Taikyu Series held its first qualifying session of 2019, setting the grid for Sunday’s season-opening five-hour race around legendary Suzuka Circuit.

The grid is set based on the aggregate fastest laps of each teams’ “A” and “B” drivers, in the top categories of ST-X, ST-Z, and ST-TCR, it is the team’s primary Gentleman driver and the team’s designated professional (Platinum or Expert grade) who will battle for pole position over two legs of qualifying.

Group A saw Hamano locked in a tight battle with Satoshi Hoshino in the new #777 D’station Racing Aston Martin Vantage GT3, which set the fastest time in Free Practice by nearly 2.5 seconds! But the rest of the ST-X field still had the pace to unlock come qualifying, and Hamano was quickest of the gentleman racers, edging out 2019 Le Mans rookie candidate Hoshino by 0.260 seconds.

But the real fight was going to be in Group B, where the professional drivers did battle in a tight qualifying session. Kazuki Hoshino in the #1 GTNET GT-R was the first driver to break the 2-minute barrier all weekend. 20-year-old Harrison Newey was the star of the group, taking his #300 Tairoku Racing Ferrari 488 GT3 to the top spot in the session with a lap of 1’58.748.

But with the combined times of Hamano and Kazuki Hoshino, the #1 GTNET GT-R took pole position by three-tenths of a second, securing a point in the championship standings. 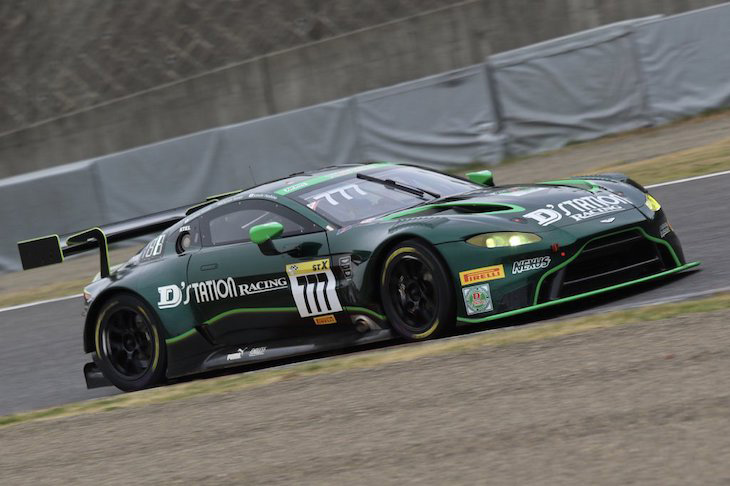 The new #777 D’station Vantage will start second on the grid tomorrow. Three-time Le Mans class winner Darren Turner finished fourth in Group B qualifying, but his time was still good enough to secure a front-row starting spot for himself and co-drivers Satoshi Hoshino and Tsubasa Kondo. 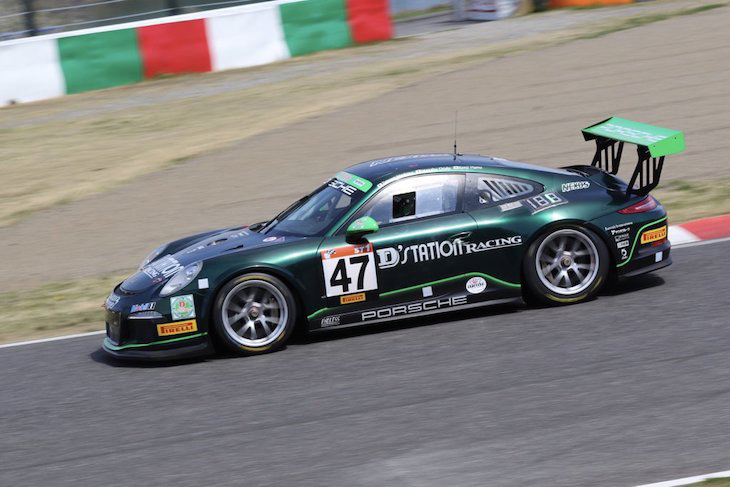 Eighth overall on the grid will be the ST-1 Class pole-winning #47 D’station Porsche 911 GT3 Cup (Tatsuya Hoshino/Manabu Orido/Kenji Hama), and ninth will be the #998 Z-Rex Advics Audi R8 LMS Cup, which tweaked its lineup prior to the race (more on that in the Saturday Notebook section).

2019 sees the first true championship battle in the ST-Z (FIA GT4) class after two years in post-launch dormancy, and the #2 K’s Frontier Syntium KTM X-Bow GT4 (Taiyou Iida/Hiroki Katoh/Kazuho Takahashi) and the #3 Endless Sports Mercedes-AMG GT4 (Yuudai Uchida/Hideki Yamauchi/Tsubasa Takahashi) were by far the class of the field in the category. 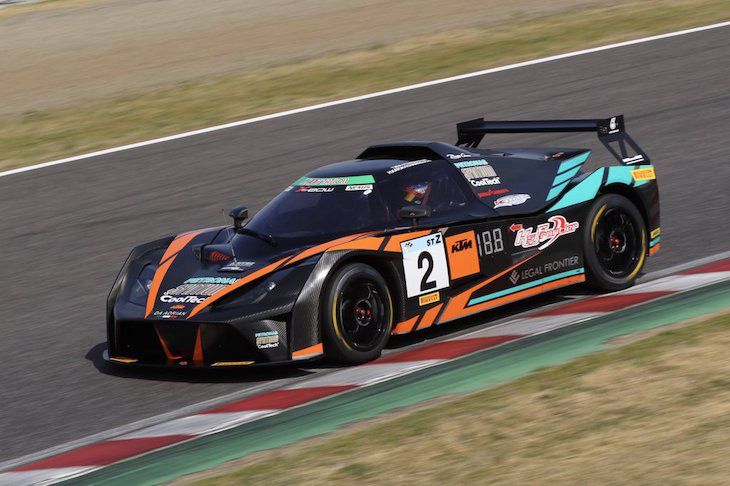 But in the end, it was the striking #2 KTM which qualified fastest in class, tenth overall, as the best times of gentleman driver Iida and Super GT veteran Katoh bested the best times of Uchida and Yamauchi in the #3 Mercedes by just 0.202 seconds on aggregate!

It’s a long way down to the third-place #190 Birth Racing Project Mercedes-AMG GT4 (Kouichi Okumura/Akira Mizutani/Hisamori Hayashi/Daisuke Yamawaki), Okumura and Mizutani were seven seconds back of the other two ST-Z runners and qualified 24th overall. 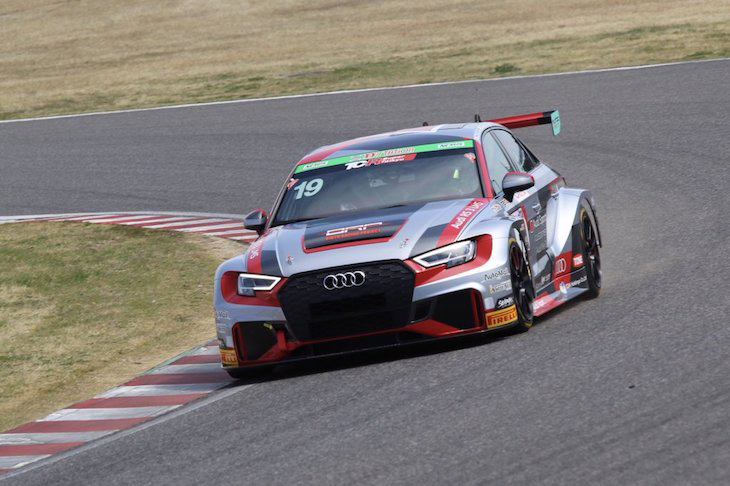 But more encouraging results for Birth Racing Project came as their #19 Audi RS3 LMS of Hirobon, Takeshi Matsumoto, and Takuro Shinohara took pole position in the ST-TCR class. Hirobon led Group A amongst the TCR runners, and Matsumoto finished second in Group B, giving the #19 BRP Audi pole position in class, 12th overall by a second and a half. 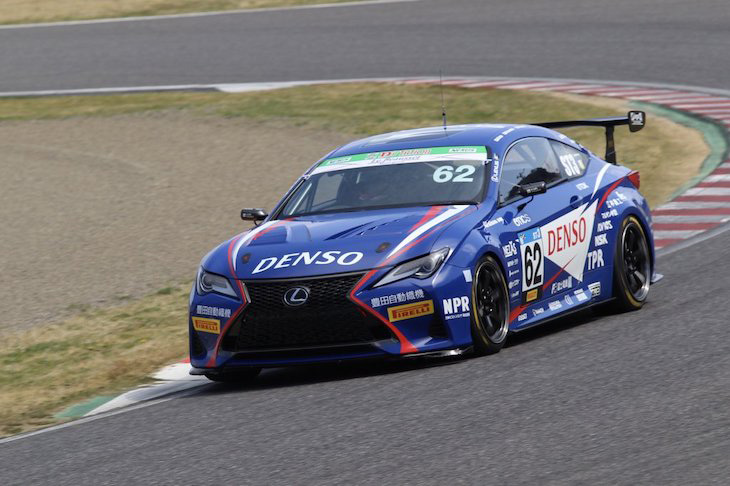 Fastest in ST-3 was the #62 Denso Le Beausset Motorsports Lexus RC 350 – the star tandem of Toyota factory drivers Koki Saga and Kenta Yamashita were two seconds up on the rest of the class in qualifying, and they along with Ryo Ogawa will start 18th overall. 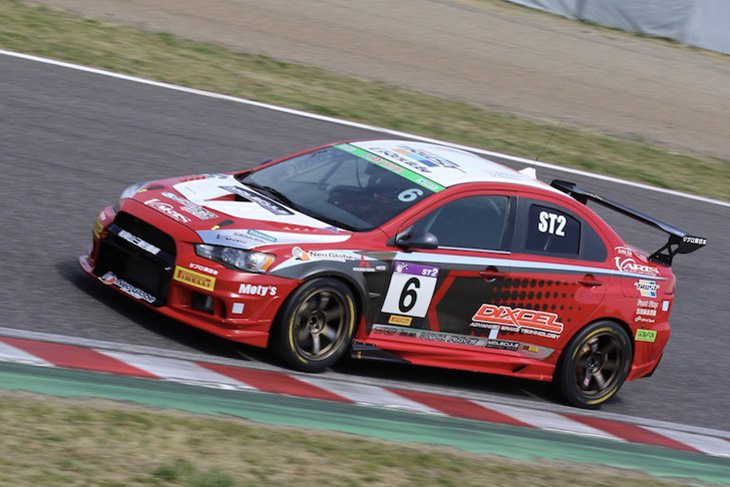 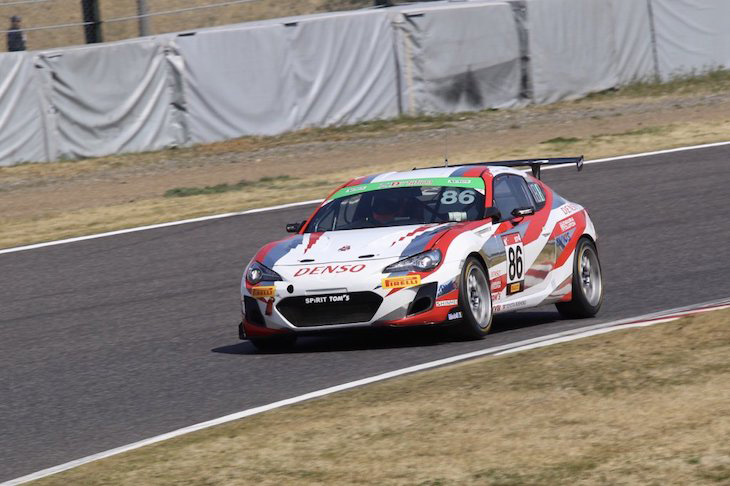 Down to Group 2 and the ST-4 class, where Toyota factory GT500 drivers Sho Tsuboi and Yuichi Nakayama were the class of the field in the #86 TOM’s Spirit Toyota 86. Tsuboi and Nakayama were fastest in their respective groups – with an aggregate time good enough for 31st overall – and they along with Takamitsu Matsui will lead the Group 2 grid (ST-4 and ST-5) come Sunday.

The best of the non-86 runners was the #116 Captain Harlock/WS Engineering Honda S2000 (Ryuichiro Otsuka/Noboyuki Yoshida/Ouji Semba/Yotaro Akahoshi) in fourth, and in fifth, the #104 Rookie Racing 86 of Daisuke Toyoda, Akira Iida, Yasuhiro Ogura – and a headline-grabbing last-minute addition to the team named “Morizo” (see the Notebook section for more!) 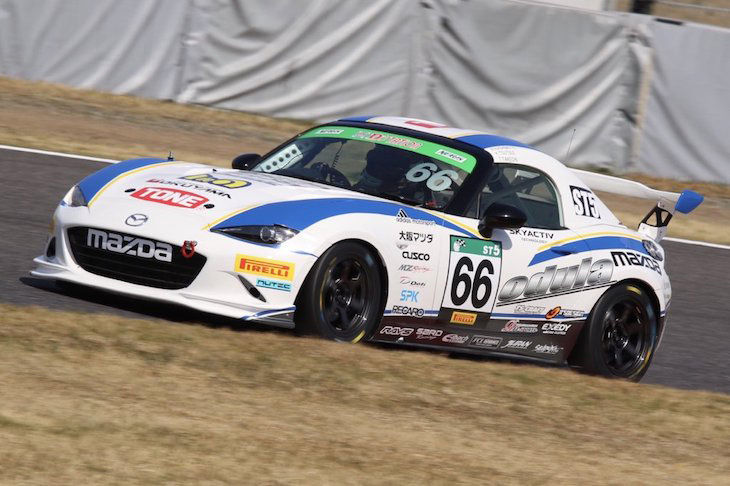 And in ST-5, the Mazda Roadsters locked out the front row in the class, led by the #66 Odula Idia Roadster for OverDrive Racing, driven by Riki Hashimoto, Takayuki Takechi, and Katsuhiko Tsutsui, with the 41st best aggregate time overall.

Sadly, the field is down from 53 to 52 cars as the #35 Monocolle/Sun’s Create Ginetta G55 GT4 suffered terminal damage in a crash in a Friday test session, and was forced to withdraw. 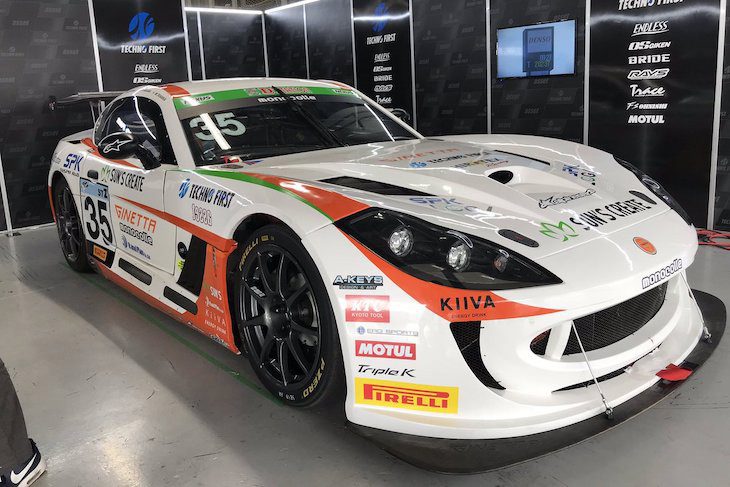 Three-time GT500 Champion and four-time Super Formula Champion Satoshi Motoyama was the headlining driver alongside Keishi Ishikawa and Masaki Tanaka. They’ll now take in the race as spectators, and Techno First Racing Team will move on to getting the car ready for the second round at Sugo on 27-28 April.

There’s been some additions to the entry list and some driver changes, and of them, the addition of fourth driver “Morizo” at Rookie Racing in their #104 Toyota 86 was the talk of the paddock today…

…as, of course, “Morizo” is the racing alias of Toyota CEO, Akio Toyoda. Toyoda, who most recently competed in the 2018 season finale at Okayama, will race alongside his son Daisuke tomorrow. 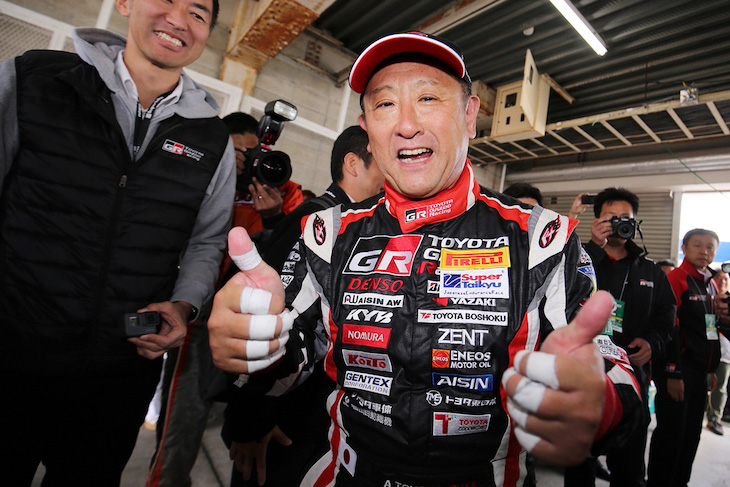 In ST-1, Jason Zhang and Leo Ye Hongli are now joined by Xu Ling Xiao and Kizuku Hirota in the #998 Audi R8 LMS Cup. In ST-2, Hirofumi Okumura and Carlos Honda have been added to the crew of the #7 Shinryo Lancer Evo X.

Back to ST-4, the new #54 TC Corse Mazda Roadster RF filled out its driver lineup, with Teruaki Kato now joined by Kenichi Obara & Yuya Hiraki – but their status for the race is uncertain after they failed to run at all this Saturday.
In ST-5, the TBAs in the #88 Murakami Motors Mazda Roadster have been filled: Hiroyuki Murakami is now joined by Takeshi Wakitani, Yasunori Nakajima, and Taro Kajitani, while Zene Okazaki is a last-minute fourth driver addition to the #101 HMRacers Mazda Demio 15MB.