D’station Racing and Aston Martin kicked off their new partnership in the best possible way at Suzuka Circuit.

Satoshi Hoshino, Tsubasa Kondo, and three-time 24 Hours of Le Mans GT class winner Darren Turner took the #777 D’station Aston Martin Vantage GT3 to victory in its first race in the opening round of the 2019 Pirelli Super Taikyu Series at Suzuka and the first competition victory for the second-generation, turbo-V8 Vantage GT3.

The five-hour race around Suzuka began just after 12:30 PM local time. 51 cars started the race, following the withdrawal of the #35 Monocolle/Sun’s Create Ginetta G55 GT4 and a DNS for the #54 TC Corse Mazda Roadster RF.

The pole-winning #1 GTNET Motor Sports Nissan GT-R GT3 (Teruhiko Hamano/Kazuki Hoshino/Kiyoto Fujinami) led the field through the first hour of the race. Young Fujinami was flawless in his opening stint of the race, setting the tempo until the first Full Course Yellow intervention on Lap 29. 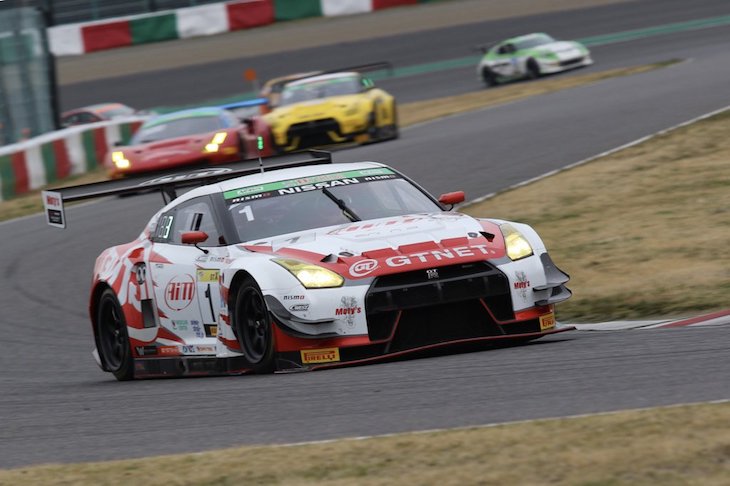 That prompted the overall leaders to pit for their first routine services. Fujinami gave way to gentleman driver Hamano, and Kondo, who started the race in the #777 D’station Vantage, gave way to his gentleman co-driver Hoshino. During that sequence, the #300 Tairoku Racing Ferrari 488 GT3 (Tairoku Yamaguchi/Harrison Newey/Nicolas Costa/Shinichi Takagi) pitted from third place, switching one young pro for another as 20-year-old Super Formula rookie candidate Newey relieved Costa after the first stint.

Gentleman drivers Hamano and Hoshino battled for the lead for several laps, but after another FCY came and went, Newey in the Tairoku Ferrari quickly chased down the top two. On Lap 45 Newey passed Hoshino for second through Turns 1 & 2, and three laps later, he overtook Hamano for the lead in the same place. 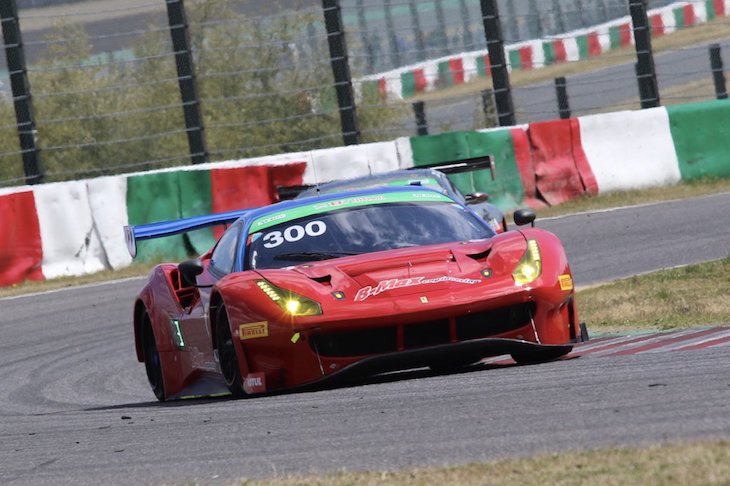 On Lap 53, Hamano and the #1 GTNET GT-R tripped over the ST-4 class #104 Rookie Racing Toyota 86 of Yasuhiro Ogawa at the exit of Spoon Curve, sending Ogawa hard into the sponge barriers and triggering a lengthy Safety Car intervention. There was a concern on the faces of everyone at Rookie Racing, especially Ogawa’s co-driver, Toyota CEO Akio Toyoda.

Ogawa walked away from the crash, but the car was totalled. Hamano limped the GTNET GT-R back to the pits with right-rear suspension damage that would cost them 27 laps, and any hope of GTNET Motor Sports winning a fifth Suzuka Super Taikyu race in six years were dashed.

During that safety car, Tairoku Yamaguchi relieved Newey after Team Tairoku’s second stop. On Lap 77, with two hours left in the race, Yamaguchi came to grief with a backmarker, colliding with the #88 Murakami Motors Mazda Roadster ND of Naoya Yamaya into Spoon Curve. Both Yamaguchi and Yamaya were unhurt, but both their cars suffered terminal damage, and another ST-X contender was eliminated.

It was during the ensuing FCY period that D’station Racing made their penultimate pit stop and installed Darren Turner for the final 1 hour, 50 minutes of the race. 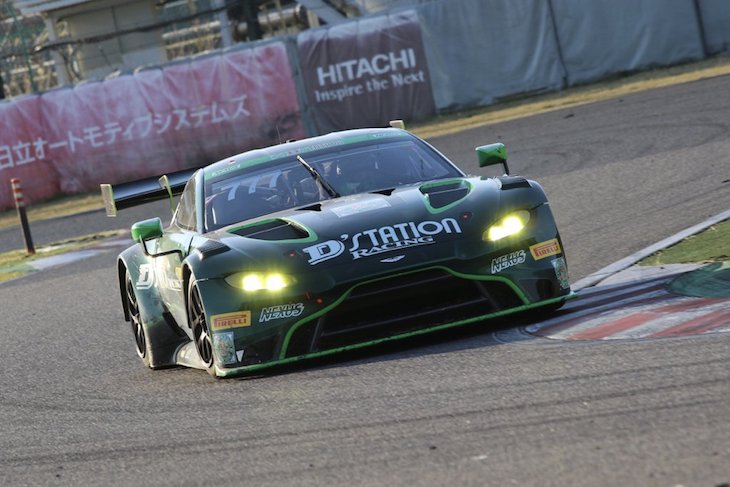 Flawless pit work from the D’station Racing mechanics on their final stop on Lap 110 ensured Turner would still lead the race by a significant margin, and as all their would-be challengers fell to the wayside earlier on in the race, the D’station Racing team, after 130 laps over five hours, cruised to a commanding overall victory in their first race with Aston Martin, and the first race in Japan for the new Vantage GT3 and for Aston Martin’s franchise player Turner.

“It’s very special to win here at Suzuka,” said Turner after the race. “These two guys [Hoshino and Kondo] did a fantastic job in their first part of the race and then for me, it was quite easy, I just had to make sure we kept out of trouble and brought the car home to the flag!” 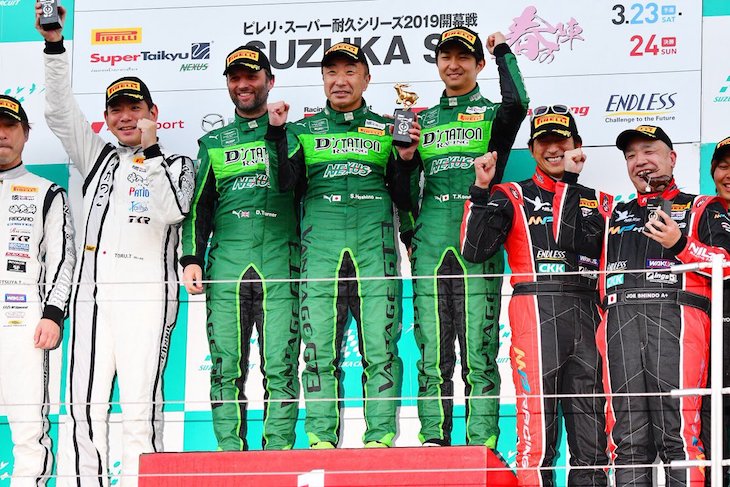 “The D’station Racing team have done a great job, and it was great for Aston Martin Racing to get their first win with the Vantage GT3. The team made me feel very welcome, and it’s been fun to come to Suzuka and try the circuit for the first time.”

A win on his Suzuka debut for Turner, of course, but for team owner Satoshi Hoshino, who’s set to make his 24 Hours of Le Mans debut this June with Dempsey-Proton Racing, a confidence-building race that showed his proficiency as a gentleman driver, highlighted by his battle with Hamano in the second hour of the race. With two flawless stints of his own, Tsubasa Kondo showed his class as well.

In their premier class debut, the #9 MP Racing Nissan GT-R GT3 (Joe Shindo/Yusaku Shibata/Masami Kageyama/Ryuichiro Tomita) finished three laps down, but on the overall podium in third, 24 seconds ahead of the #83 X Works Audi R8 LMS (Tse Ka Hing/Shinya Sean Michimi/Philip Tang) in fourth, and the #112 Sato-SS Mercedes-AMG GT4 (Atsushi Sato/Yuya Motojima/Ryosei Yamashita), who lost out on a podium chance after a puncture and spin in the second hour. 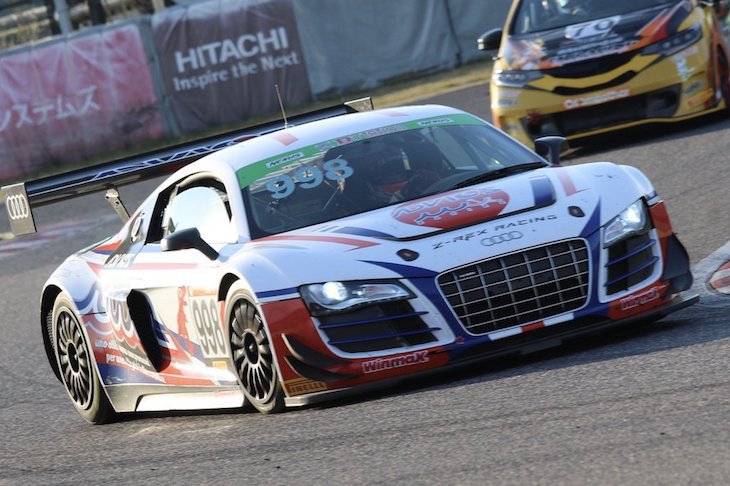 ST-TCR had plenty of action, some controversy, and a first-time winner in class in the #65 Phenomen Mars Audi RS3 LMS of Hideaki Okajima, Masanobu Kato, Masato Shimoyama, and Daisuke Imamura (7th overall). 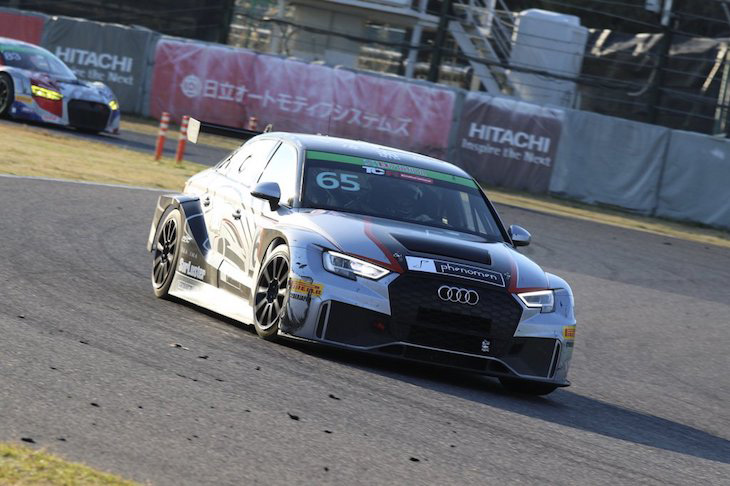 It’s just the second victory for Audi in the TCR era, and the first for sophomore squad Audi Team Mars, who jumped to the head of the pack during the FCY and Safety Car interventions in the second hour of the race. Kato put in a savvy final double stint, conserving fuel when possible, to close out the victory.

The battle for 2nd came down to a heated fight between the #19 BRP Audi Mie RS3 LMS (Hirobon/Takeshi Matsumoto/Takuro Shinohara) and the defending champion #97 Modulo Honda Civic TCR (Tadao Uematsu/Shinji Nakano/Mitsuhiro Endo/Hiroki Otsu). With less than ten minutes to go, Otsu and Matsumoto clashed into Turn 1, sending both skidding through the gravel. Otsu’s Civic came away better in the exchange. On track, the #97 Modulo Civic finished 6 seconds back of the #65 Audi.

But after a penalty to the #97 Modulo Civic for avoidable contact, they were dropped to third place in class – giving the #19 BRP Audi back their second-place finish. They were penalized once more after the podium ceremony, dropping them to fourth and promoting the #501 KCMG Annika Civic TCR (Paul Ip/Matthew Howson/Jim Ka To) to third in class on the team’s Super Taikyu debut! 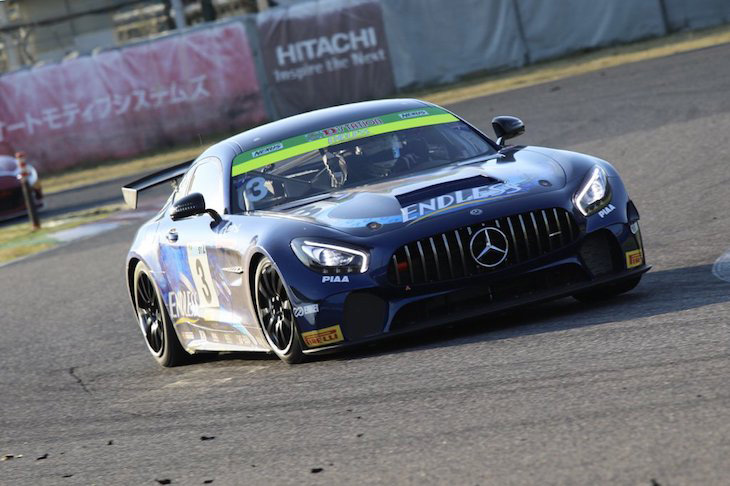 The KTM finished two laps behind them, second in class despite pit stop issues during the race, while the #190 Birth Racing Project Mercedes-AMG GT4 (Kouichi Okumura/Akira Mizutani/Hisamori Hayashi/Daisuke Yamawaki) finished a further three laps down, third in class. 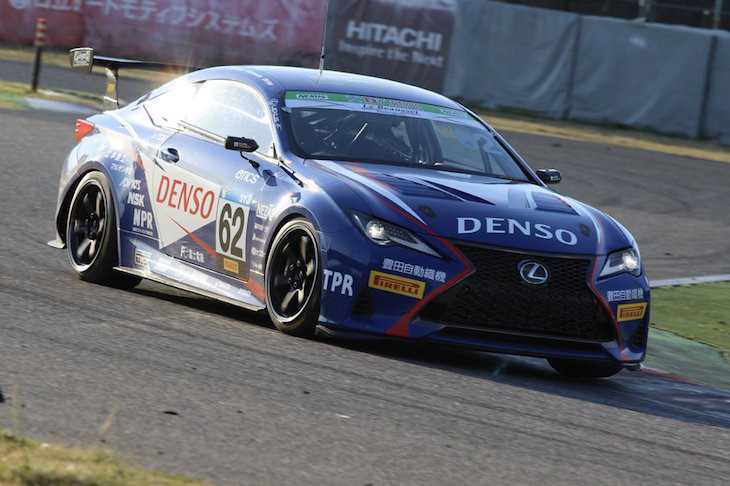 ST-3 class honours went to the #62 Denso Le Beausset Lexus RC 350 of Koki Saga, Kenta Yamashita, and Ryo Ogawa (15th overall). They led most of the race in their class with no major issues, up until they suffered pit trouble and dropped back to second.

But the all-star trio in the Denso RC fought back, and they finished 26 seconds up on the #38 Advics Muta Racing Lexus RC 350 (Makoto Hotta/Ryohei Sakaguchi/Yuui Tsutsumi). The #68 Saitama Toyopet GreenBrave Toyota Mark X (Naoki Hattori/Shigekazu Wakisaka/Hiroki Yoshida) completed the ST-3 podium in third. 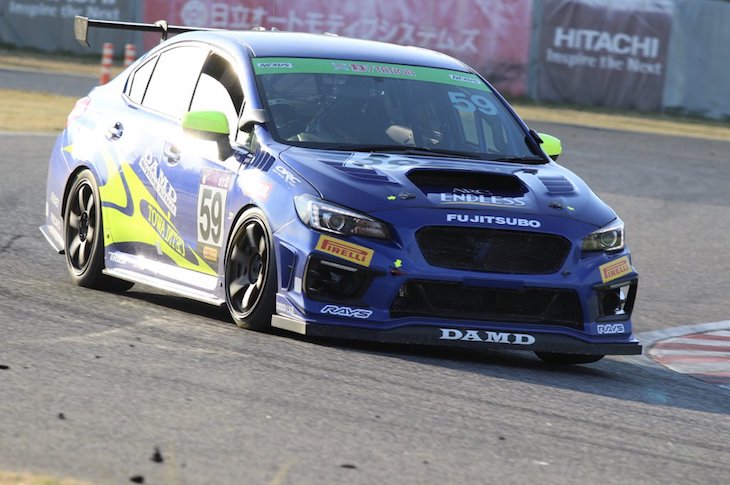 TOWA INTEC Racing kicked off their pursuit of a record seventh straight class championship with a victory in the ST-2 class (22nd overall) for their #59 DAMD Motul Subaru WRX STI of Manabu Osawa, Hitoshi Gotoh, Takuto Iguchi, and Mizuki Ishizaka. 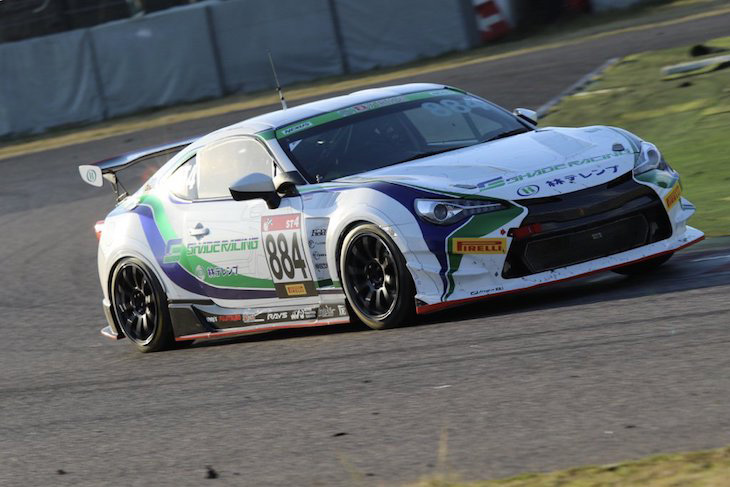 In ST-4, the Hayashi Telempu Shade Racing picked up their first-ever victory in class with the #884 Toyota 86 of Katsuyuki Hiranaka, Yuji Kunimoto, and Hiro Hayashi.

The battle for the win in class blew wide open as the #86 TOM’s Spirit Toyota 86 (Sho Tsuboi/Yuichi Nakayama/Takamitsu Matsui) suffered a drivetrain failure in the first hour, taking the overwhelming class favourites out early. It was the #884 Shade Racing 86, led by Kunimoto and Hiranaka, who took the class win by two laps. 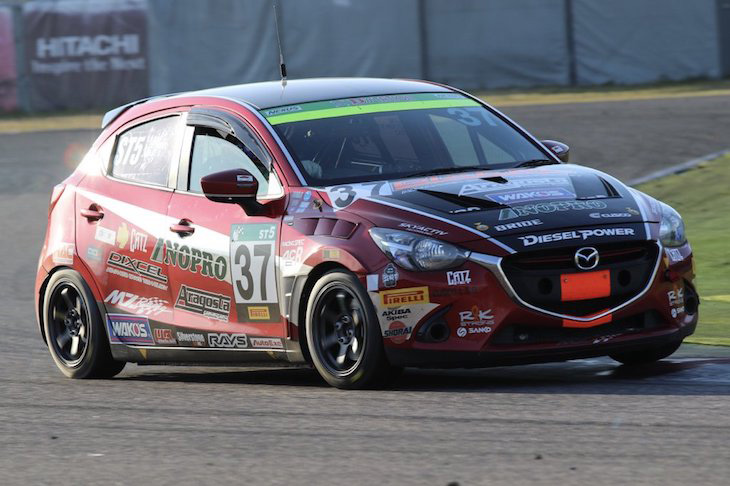 Finally, after several hours of close racing for the lead, the ST-5 class was won by the diesel-powered #37 DXL Aragosta Team NOPRO Mazda Demio (Kaoru Ijiri/Kazundo Tsuji/Yutaka Seki), using their supreme fuel economy to take one fewer stop and take home the victory.

J’s Racing’s Honda Fit RSes filled out the podium, with the #70 (Seiji Imuta/Masayuki Ueda/Hideo Kubota) in second, and the #69 (Junichi Umemoto/Toshihiro Kubota/Shinsuke Umeda) in a nice third.

The Pirelli Super Taikyu Series returns on 27-28 April for the second round at Sportsland Sugo, with two three-hour races.