All of the practice sessions are in the books for the California 8 Hours, and on the docket for Friday’s running is Qualifying, and the pole shoot out.

Thursday’s Free Practice session saw the #10 Audi Sport Team WRT top the charts. Audi is looking to rebound from a disappointing Bathurst 12 Hours this weekend. The German marque has won the last two runnings of this event and appear a strong contender once more. Their best time in the session was a 1:23.971. 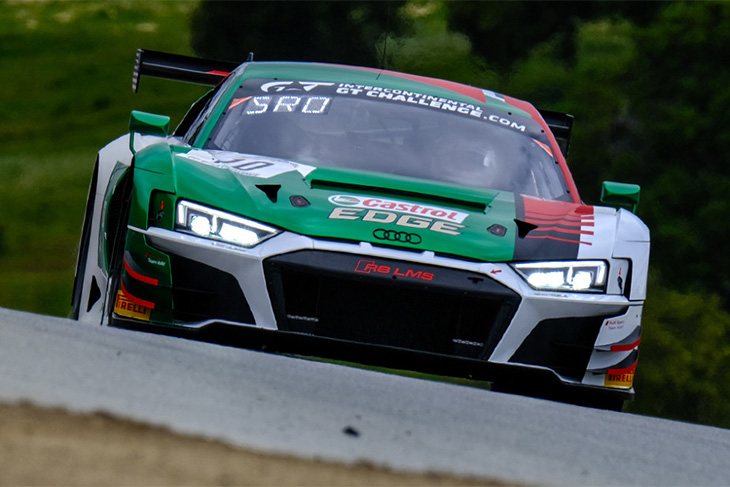 Two-tenths of a second off of them was the #34 Walkenhorst Motorsports BMW M6 GT3. The #34 BMW and its sister car in the #42 BMW Team Schnitzer M6 GT3 completed a session-topping 46 laps, and 48 laps respectively.

Mercedes-AMG nabbed third and fourth in the session with the #888 GruppeM Racing entry clocking in a 1:24.266, fractionally better than the #44 Strakka Racing AMG GT3 whose best time was a 1:24.374.

The cars also headed out for a Pre-Qualifying session, effectively another Free Practice session, where the #30 Honda Team Motul NSX GT3 (badged as an Acura for the meeting), making its IGTC debut, topped the charts with a 1:24.060.

Adding to the varying manufactures at the sharp end of the field was the two Porsche entries from Park Place and Wright Motorsports who ended the session second and third. Each Porsche 911 GT3-R was within two-tenths of a second of the top time.

The first round of qualifying is scheduled for 19:20 GMT, with the pole shoot out set for 23:40 GMT.

Three cars are set to make their IGTC debut this weekend, those being the Audi R8 GT3 Evo, the Honda NSX GT3 Evo (badged an Acura) and 2019 Porsche 911 GT3 R.

The Audi R8 GT3 ran in Bathurst, but not in its latest spec (like Porsche), which has already been used in IMSA competition this season. Audi Sport Team Land driver Kelvin Van Der Linde explained the changes Audi brought with the upgrade and the thoughts behind Audi’s R8 Evo kit.

“What matters most it that it now correlates with the next generation Audi R8 road car in terms of its looks.”

Though the improvements to the car are not just in terms of the looks, but also the performance and drivability aspect of the car.

“Small tweaks we made, things that might affect the car over a race distance like tyre life, and our rear brake cooling. All things that are also important to our customers,” Van Der Linde added.

Van Der Linde is going for his third straight win at this race after taking victories in both the 2017 and 2018 runnings.

Porsche looking to stay perfect in the IGTC

Wright Motorsports and Park Place will look to continue the success that Porsche saw at the Bathurst 12 Hour earlier this year, kicking off the 2019 IGTC season when Earl Bamber Motorsports secured a big win for the outgoing 911 in its debut race. 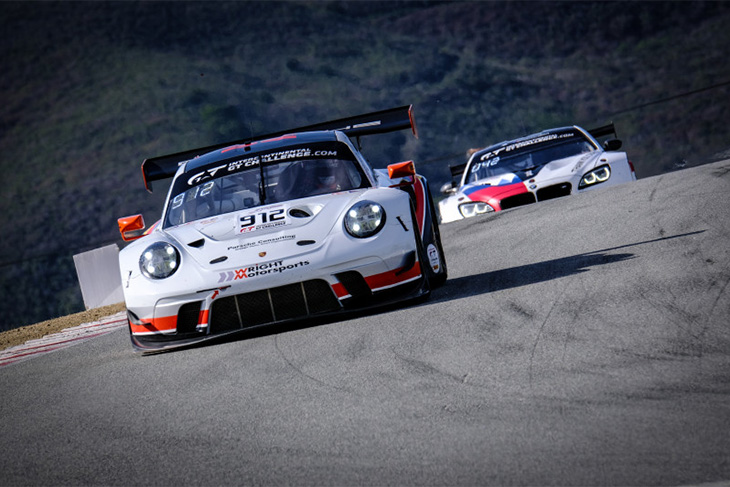 The #912 Wright Motorsports Porsche (above) was one of the first cars to go through technical inspection on Friday morning.

All of the drivers participated in a group photo at Laguna Seca’s famous Corkscrew sign before the qualifying session. The trip out to the hill also provided an opportunity to see some of the new fencing that has been installed around the track, this section on the run between Turn 9-10.

DSC spoke with the always cheerful Augusto Farfus on Friday morning, the Schnitzer driver excited for the race to come tomorrow. 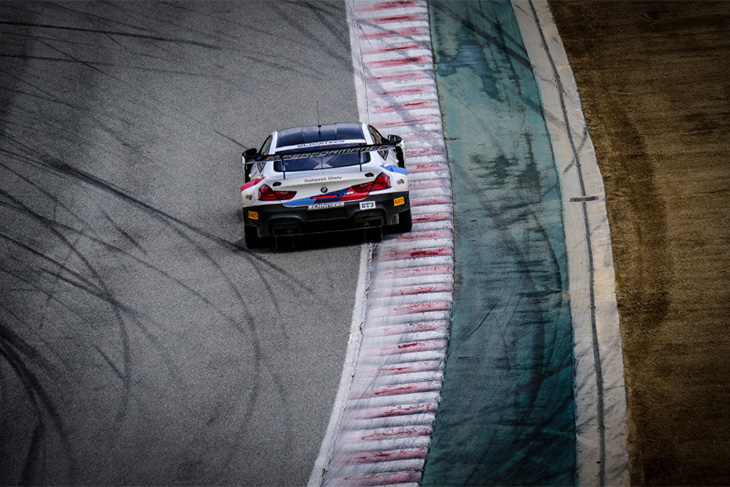 “It’s the first time we are taking this challenge seriously. BMW is putting a lot effort in and this year is a full commitment,” Farfus said. “We want to win the championship, we are pushing.”

BMW currently sits fourth in the manufacturer standings after Bathurst and will look to catch the likes of Mercedes-AMG and Porsche. According to Farfus, however, Laguna Seca might not be the track for the BMW M6 GT3 to stretch its legs. “ The track is not the best for our car,” adding that the M6 is best suited for “medium and high-speed corners, tracks like Spa.”

Farfus teamed with IndyCar’s most recent, and youngest, a race winner in Colton Herta for the Rolex 24 earlier in the year. The Brazilian told DSC he would be “… happy to have him back. The job he did [at Daytona] was astounding. It was his first 24-hour race and he won, I had to remind him to not get used to it.”

The #42 BMW Team Schnitzer M6 GT3 which Farfus will drive with Martin Tomczyk and Chaz Mostert is also sporting a much larger version of the “Thank You, Charly!” sticker that the BMW M8 GTLM ran at Daytona.