It was a dominant performance throughout both parts of the 12H Mugello that saw the #11 Scuderia Praha Ferrari take a three-lap winning margin.

The Ferrari led every lap of the opening three hour part of the race on Saturday and held the lead after the rolling restart on Sunday morning.

The Barwell Motorsport Lamborghini would be the only other leader after excellent speed on Sunday saw them keep in touch before taking the lead for 28 laps in the first hours of Sunday running.

Strong pit work though, plus issues for many of its nearest rivals, allowed the Ferrari to build the three-lap advantage it would hold to the finish.

“This is really amazing because this is our second win in Mugello,” Jiří Písařík said later. 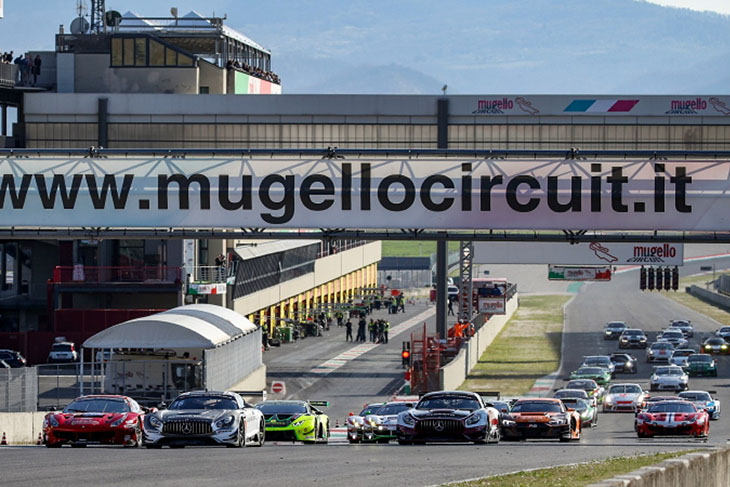 “In the beginning, I wasn’t sure how it was going to go, but this was really incredible. Matteo did a great job, he drove 4.5hrs combined, and his pace was absolutely perfect.”

“It’s definitely perfect,” teammate Josef Kral agreed. “It’s like a home track for us, especially for Matteo because he lives just 45 minutes away. And to do this with a Ferrari, we’re going to have to celebrate this properly!”

The pole setting SPS Automotive Performance AMG, by contrast, had no luck at all – Tim Müller was mugged at the start, slipping from 1st on the road to 5th, and thereafter to 7th before heavy contact 38 minutes in all but destroyed the AMG’s front right wheel hub, the Mercedes was already out of contention after just 19 laps. 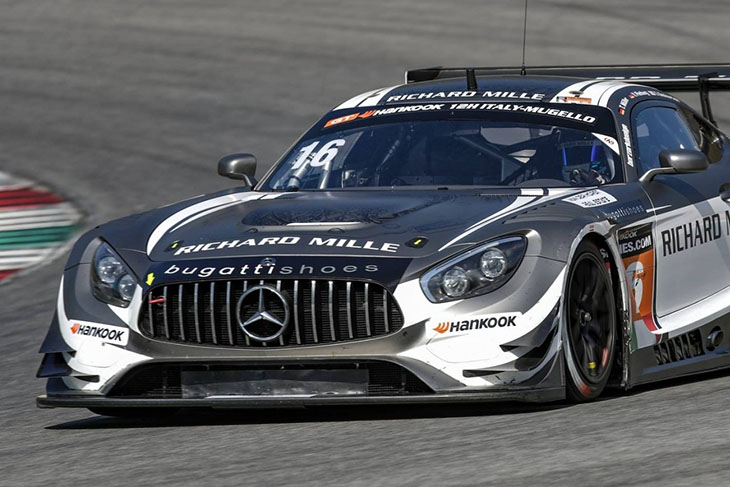 Imperiale Racing’s #32 Lamborghini was then into the mix and chasing the leader, despite a bit of over-exuberant panel-rubbing with the #88 Car Collection Motorsport Audi on lap two but was unlucky to lose a huge amount of time in the refuelling bay when the first Code 60 caution period was thrown. That left them outside the top 10, and, unfortunately, it was mostly downhill from there. A spin on-track and possible contact with the #101 Red Camel-Jordans.nl CUPRA TCR(#101) meant they lost almost 15 minutes repairing the damaged rear bodywork, dropping them to 23rd at the flag.

The #91 Herberth Motorsport Porsche 991 GT3 R (Daniel Allemann / Ralf Bohn / Robert Renauer / Alfred Renauer) rounded out the top three after working its way through the order from 7th at the re-start.

The race had run astonishingly almost incident-free until just minutes before the overnight break when all hell broke loose – multiple incidents delaying and eliminating multiple cars – and allowing the chasing pack top close up class-leading gaps!

Finishing 4th and 5th on the road respectively, the result ensured that five different manufacturers, Ferrari, Lamborghini, Porsche, Audi and Mercedes-AMG, finished inside the top five.

Wochenspiegel Team Monschau were very welcome additions on the grid with their pair of Ferrari 488 GT3s after the VLN regulars left that series in a spat over FIA-enforce BoP.  Wochenspiegel had looked well placed towards the end of the Saturday running until their charge faltered after a clash with the #301 Vortex V8 of Franck Lefèvre. Unaware that the #22 was trying to pass him on the inside of Biondetti, the Frenchman inadvertently swiped the left rear wheel arch of the #22 Ferrari as it moved past, adding insult to injury by forcing the sister #21 488 – who was also trying to pass – onto the grass, allowing Rik Breukers in the #88 Car Collection Motorsport Audi to sneak through. 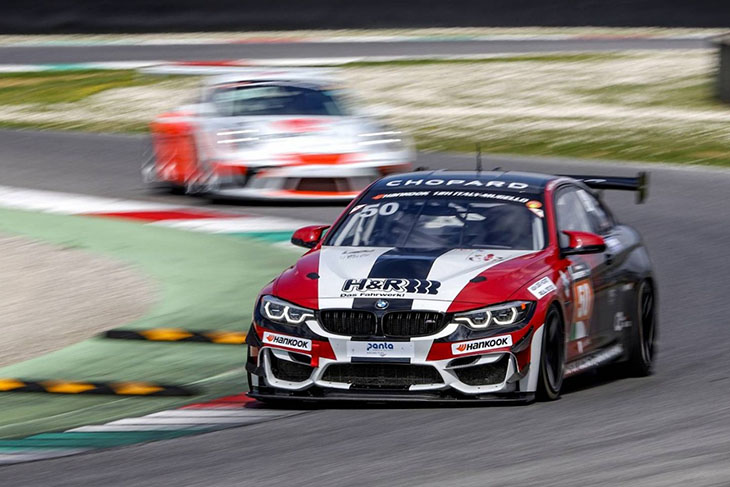 This is the second win of this year’s 24H SERIES powered by Hankook for the Swiss outfit, which also kicked off its 2019 Championship of the Continents campaign two months ago with a win at the vaunted Hankook 24H DUBAI.

“It was a really tough race because someone was always on our tail,” Jan Sorensen explained to radiolemans.com’s Joe Bradley. “Yesterday we came up to 2nd, but this morning we fell all the way down the order and thought all was totally lost. Fortunately, everyone seemed to have trouble with their tyres. Suddenly we were 4th and then we were 1st! But we had some fast guys chasing us down, so it feels so good to be standing here.” 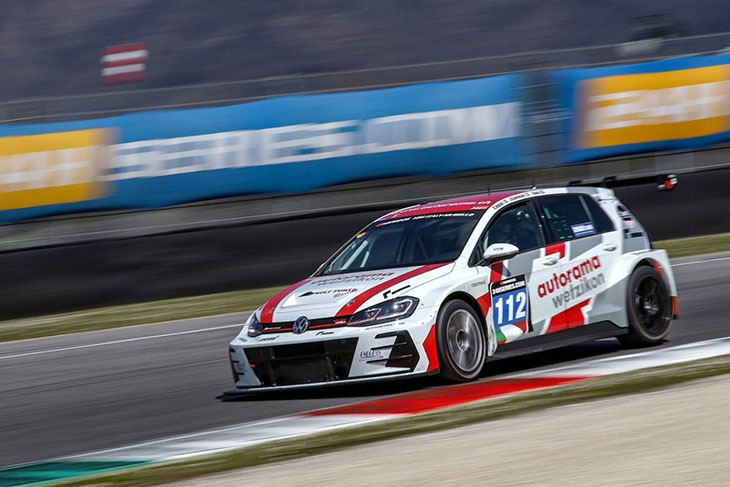 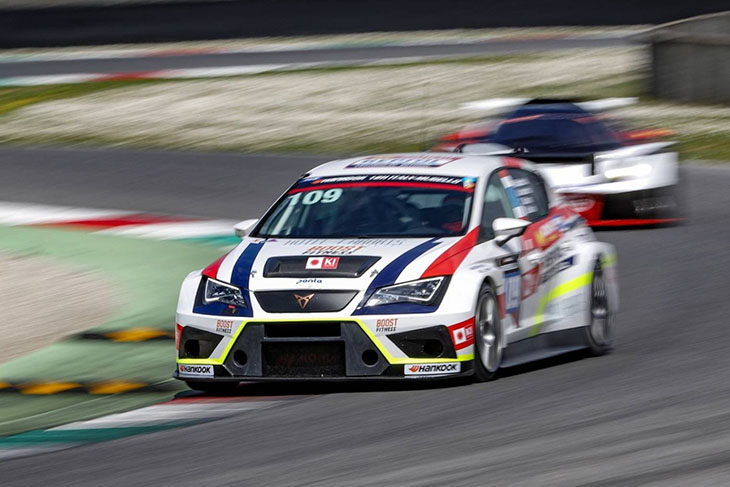 A heavy accident for the #426 MRS GT-Racing BMW M4 GT4 (Franjo Kovac / Thomas Tekaat / Tomas Pekar), which also featured the Reiter Engineering KTM X-BOW, (a car that had suffered a brief pitlane fire towards the end of the first section of the race) meant 2nd in-class went to the brand new #1 PROSport Performance Aston Martin Vantage AMR GT4, the Vantage GT4 making its European race debut in the hands of Rodrigue Gillion / Nico Verdonck / Akhil Rabindra, the car laps down after suffering yet another of the incidents that befell teams in the closing stages of part one of the race, the Aston Martin losing drive in the hands of Akhil Rabindra and pulling off-track while running 2nd, barely 30 minutes before the chequered flag was flown. Further time would be lost as the Aston was recovered to the pitlane, dropping the team nine laps adrift of the lead at that point. 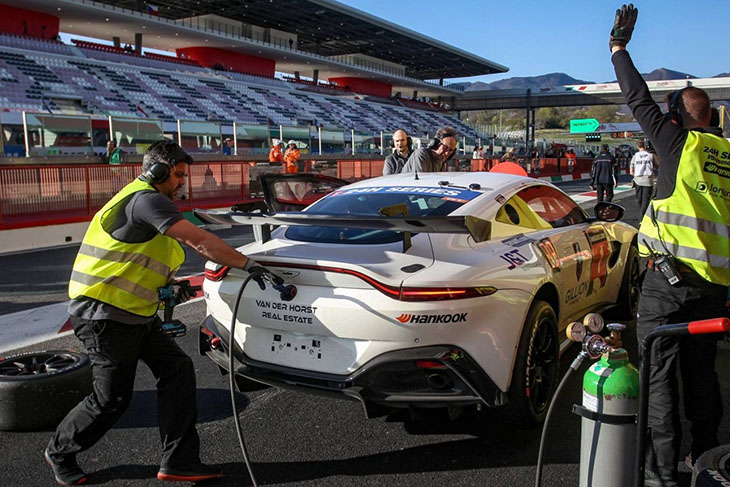 Although it failed to make the finish, the #426 BMW was still classified 3rd.