Craft-Bamboo Racing began life as a Mercedes-AMG Performance Team in perfect fashion at Sepang where Jeffrey Lee and Alessio Picariello came through from 12th on the grid to win a thrilling rain and Safety Car interrupted Blancpain GT World Challenge Asia season opener. 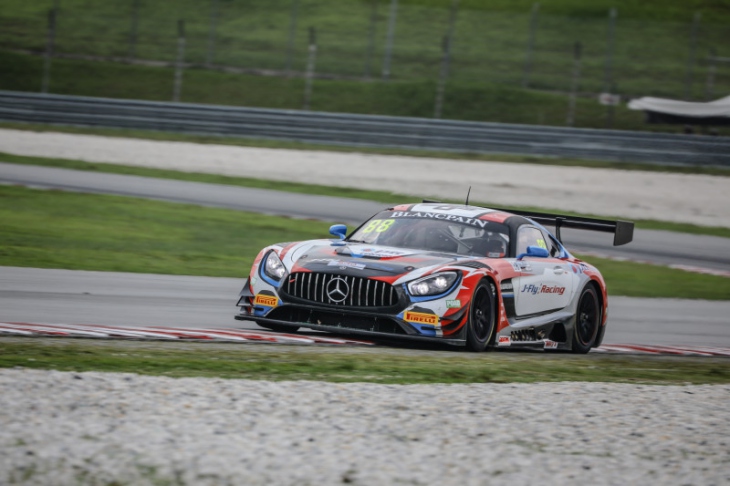 The race began with rain falling at various points around the circuit. But that didn’t deter Darryl O’Young who reacted quickest to burst through from fifth to first by the time the 30-car field reached Turn 1.

A frenetic following 25 minutes featured three Safety Car periods, one to cover a brief localised downpour and two more for stranded cars, which helped TSRT’s David Chen and Indigo’s Choi move from ninth and seventh to first and second by the time the pit window opened just as the third caution was required. Most of the field duly stopped at the first opportunity, which ultimately resulted in Chen’s co-driver Andre Couto being boxed in and losing the lead.

Indeed, the combination of Safety Car timings and a packed (and it should be said frenetic!) pitlane meant the order looked very different after the stops had shaken out. Choi’s co-driver Piana emerged with a sizeable advantage over Russell whose HubAuto co-driver Sakamoto pitted from fifth.

But the biggest winners were Craft-Bamboo’s #88 crew who, in Lee’s hands, made up four places over the opening stint before smart pit work helped Picariello emerge in fourth. He had soon passed team-mate Christina Nielsen, who re-joined where her co-driver O’Young had pitted from, before also overhauling Russell.

Thus the Belgian had 15 minutes with which to bridge his 10s deficit to Piana, and by the penultimate lap, the two Mercedes-AMGs were together. Spotting a gap, Picariello dived to the inside at the Hairpin, which Piana, who was momentarily baulked by a slower GT4 car ahead, was powerless to cover. 4.6s separated them at the chequered flag.

Russell finished another 4.3s behind and comfortably clear of Singha Plan-B by Absolute Racing’s Audi shared by Bhurit Bhirombhakdi and Kantasak Kusiri. However, that was before 30 seconds was added to the #59 R8’s race time as a result of overtaking behind the Safety Car.

Local hero Jazeman Jaafar’s scrap with Chris van der Drift was another highlight of the second stint, and it was the Malaysian, who shares the Triple Eight Racing Mercedes-AMG with Prince Jefri Ibrahim, who prevailed after doggedly pursuing the JRM Porsche for 20 minutes.

They were chased home by Dennis Olsen, whose pole-sitting co-driver Yuan Bo dropped from first to fourth during the opening stint.

Craft-Bamboo’s #99 Mercedes-AMG, Absolute Racing’s #911 Porsche and the Panther/AAS Motorsport Porsche all moved up two places post-race as a result of penalties after Modena Motorsports committed the same Safety Car offence as Singha Plan-B.

In GT4, BMW Team Studie’s M4 converted pole position into a first win of the season despite the best efforts of GTO Racing with TTR.

Jukuchou led the first stint but was only six seconds ahead of Brian Lee before the pitstops, and the gap remained fairly constant once Kinoshita and Tony Fong climbed aboard.

The podium was completed by Team iRace.Win’s Ringo Chong and Setiawan Santoso, who finished four seconds further back. 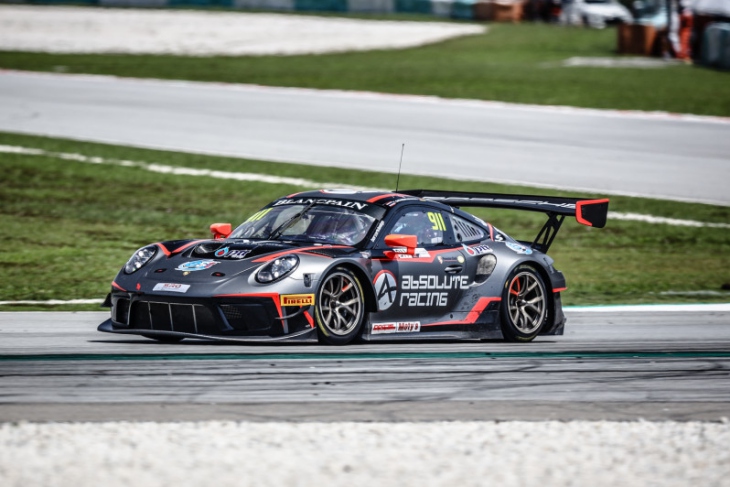 The #911 Porsche took the chequered flag 0.8s ahead of Pro/Am winners Vutthikorn Inthraphuvasak and Alex Imperatori, whose Panther/AAS Motorsport 911 made it a Porsche one-two, plus Darryl O’Young and Christina Nielsen’s Craft-Bamboo Racing Mercedes-AMG.

After the introduction this year of SRO’s new regulations that were designed to encourage greater regional participation, the top-15’s finishing drivers all hailed from Asia, while 41 of the 60 who entered Round 1 were also from the continent.

It was a fitting conclusion to a day that began with the King of Malaysia, His Majesty The Yang di-Pertuan Agong XVI Al-Sultan Abdullah Ri’ayatuddin Al-Mustafa Billah Shah Ibni Sultan Haji Ahmad Shah Al-Musta’in Billah, attending his first-ever race at Sepang where his nephew, H.H. Prince Abdul Rahman Ibrahim, was competing with Triple Eight Racing.

A tricky first lap saw pole-sitter Dennis Olsen slip to third behind Imperatori and Modena Motorsports’ Mathias Beche, who circulated together during an opening stint punctuated by a brief Safety Car period.

Hamprecht, meanwhile, maintained a watching brief in fourth place before Absolute’s decision to pit earlier than the three Porsches ahead resulted in Sathienthirakul jumping up to second behind Inthraphuvasak once the 10-minute pit window had closed.

The amateur driver then spent the majority of his stint skilfully rebuffing Sathienthirakul, who quickly closed in on his Thai counterpart, before a late lunge at the final corner with five minutes remaining settled the matter in Absolute’s favour.

Behind, a combination of stop-go and pitstop success penalties helped Darryl O’Young and Christina Nielsen add a second podium to Craft-Bamboo’s Race 1 victory. The latter pitted from 17th but was close to the front-runner’s thanks to the preceding Safety Car period, which ended moments before the pit window opened. O’Young thus re-joined amongst the Am contingent and was quickly up to fourth before relieving Sun Jingzu’s Audi of the final podium spot.

It wasn’t all plain sailing for the Hong Kong driver, who had Weiron Tan for company over the closing laps. The Malaysian’s Audi Sport Asia Team Absolute Racing co-driver, Martin Rump, started fifth but endured a tricky opening stint before Tan – who, like O’Young, quickly moved through the Am contingent – finished one second behind the Mercedes-AMG.

MG Choi and Gabriele Piana came through from 14th to add a fifth place to yesterday’s podium. That result was even more impressive considering the Solite Indigo Racing pair served an additional 10s pitstop success penalty for finishing second in Race 1.

HubAuto Corsa’s Yuya Sakamoto and David Russell also overcame a pitstop handicap to finish sixth while Alex Au and Frederik Schandorff (VSR) joined the Pro/Am podium in seventh overall. Singha Plan-B by Absolute Racing’s Audi, JRM’s Porsche and Absolute’s #912 Porsche, which dropped down the order as a result of its 35s pitstop penalty, completed the top-10.

In GT4, BMW Team Studie’s Sunako Jukuchou and Takayuki Kinoshita made it two wins from two after beating Craft-Bamboo’s Frank Yu and Jean-Marc Merlin by 16s.

The pre-pit window Safety Car period kept the GT4 contenders bunched before Jukuchou stretched his legs after the stops. Yu was also preoccupied with Ringo Chong’s iRace.Win Mercedes-AMG, which finished less than two seconds behind.

All of that sees Sathienthirakul and Hamprecht head to Thailand with a one-point lead over Choi and Piana, while yesterday’s winners Jeffrey Lee and Alessio Picariello occupy third.

Buriram in Thailand hosts round two of this season’s Blancpain GT World Challenge Asia campaign on May 11/12.