The GT300 class of the Autobacs Super GT Series has come a long way since the series’ first championship race at Fuji Speedway on 1 May 1994. Only four cars were entered in what was then known as the “GT-2” category that day. But over time, the GT300 class grew in numbers as privateer teams built their cars to the original JAF-GT300 regulations.

JAF-GT300 cars have evolved over the years, and the formula has given us some of the more unique concepts and designs in Super GT’s history. Using the cabin from the original production vehicle, teams and manufacturers have total freedom with aero, suspension, and gearbox design of their own unique concepts and any engine from the original manufacturer can be installed.

Certainly, the Toyota Prius GTs from apr Racing best demonstrated the spirit of the original JAF-GT300 regulations better than any other car in this decade, even as FIA GT3 cars now make up the majority of the grid. Using the ultimate antithesis of a performance vehicle as a base, apr built the Prius GT as a pure, mid-engined, V8-hybrid racing machine – winning several races and a multitude of curious fans during its original run from 2012 to 2018.

A loophole in the JAF-GT300 regulations that allowed for mid-engined versions of front-engined production vehicles has been slammed shut by the GT Association, so apr Racing have gone back to square one with the introduction of the second-generation Toyota GR Sport Prius PHV apr GT. 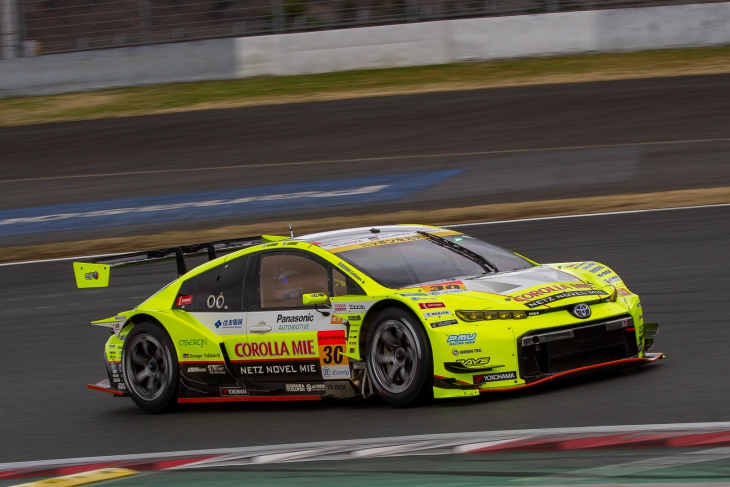 The first-ever front-engined car built by Atsugi-based apr Racing in collaboration with Toyota, the new Prius GTs also have a new engine as the 5.4 litre V8 from the Lexus RC F GT3 are installed, paired with a capacitor-driven hybrid system.

Once again, apr Racing deploy one “Pro” and one “Pro-Am” entry with two different tyre suppliers for each. The “Pro-Am” Prius is the bright yellow #30 Prius, running on Yokohama tyres, for gentleman driver Hiroaki Nagai – who brings sponsorship from his automobile dealerships – and two-time GT300 champion and drift legend Manabu “Max” Orido, still, a top driver even as he turned 50 this winter. 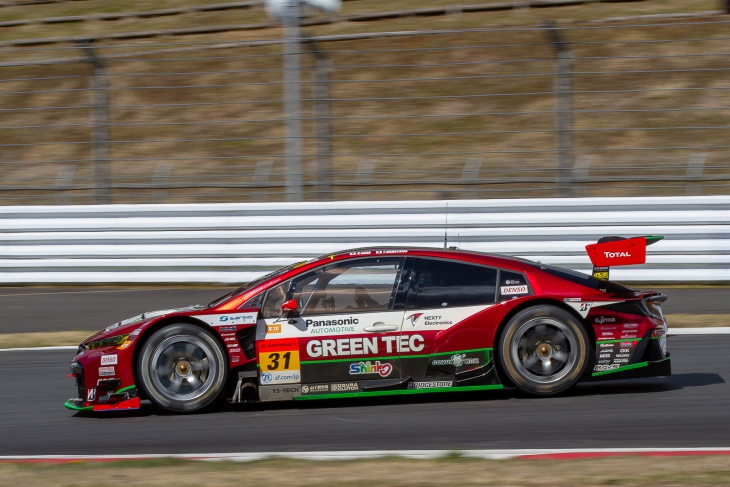 The “Pro” entry is the candy apple red #31 Prius, one of five GT300 class entries running on Bridgestone Potenza tyres. Veteran driver Koki Saga has been with apr since 2011, and although he is best known for his comedic costumed appearances during the pre-race driver introduction ceremonies, the 35-year-old is a serious competitor once the fire suit and the helmet come on.

His new co-driver is 2013 GT300 Drivers’ Champion Yuhki Nakayama, who comes over after four seasons as lead driver for Team UPGarage, leading them to their first win last April at Okayama. He won the 2013 title in another hybrid GT300 car, the Honda CR-Z GT for Team Mugen.

The testing results didn’t look encouraging for either of the two Prii, the #31 crashed in a manufacturer test in Suzuka on 7 March, and both cars remained nailed to the bottom third of the leaderboards at both official tests in Okayama and Fuji. If that’s a sign of things to come once the season starts, apr Racing could be in for a long, difficult 2019 season.

The other JAF-GT300 car in the field is the #61 Subaru BRZ R&D Sport, a factory GT300 effort run by experienced campaigners R&D Sport. 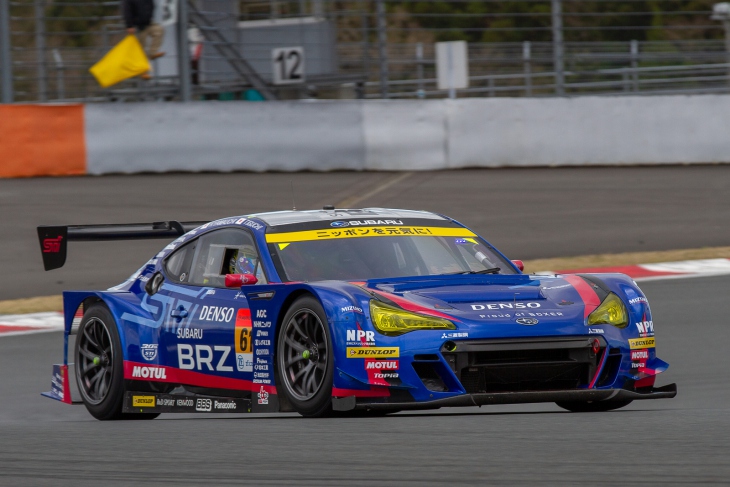 Subaru/R&D Sport retain Dunlop as their tyre supplier for a fifth consecutive season, one of the three teams in GT300 on Dunlops this year. They also retain their excellent young driver combination of Takuto Iguchi and Hideki Yamauchi, Iguchi in his sixth full season in the BRZ, Yamauchi in his fifth.

Pace has never been a problem for the mighty blue BRZ, powered by its rally-derived EJ20 two-litre turbocharged Flat-4 engine. Iguchi and Yamauchi took a dominant victory from pole at Sugo, showing the car’s potential.

But all too often, the Subaru BRZ has been a victim of poor reliability, suffering six DNFs in the past two seasons – all of them due to mechanical failures. This has consistently held Subaru back from making a credible championship challenge, especially in 2017 and 2018.

Enhancements have been made to the Subaru BRZ to improve engine reliability, aerodynamic efficiency, and tyre wear. The car showed pace in testing, but the team did have setbacks at both Okayama and Fuji. R&D Sport certainly have the manufacturer support and the personnel in place to be title contenders this year, and the Subaru faithful will support the team all the way – but reliability remains a major pain point.

Along with the original JAF-GT300 category cars, GT300 continues to be distinguished from other GT3 class racing series with the presence of the Mother Chassis cars. 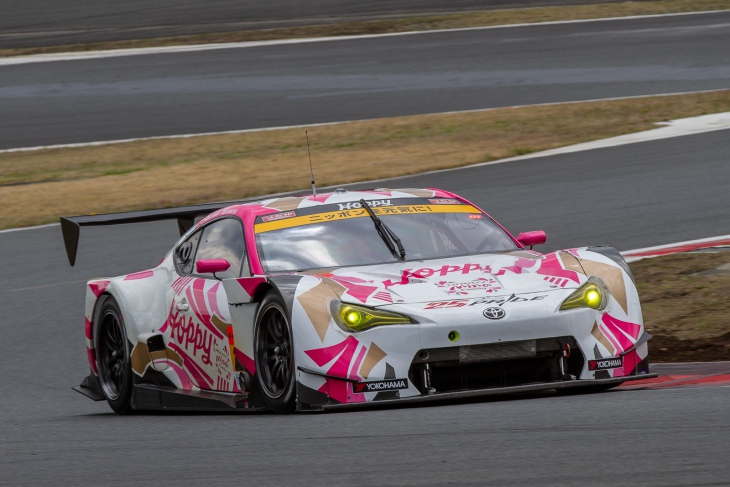 Teams are provided a set of common components – a Dome-built carbon monocoque, a 4.5 litre GTA V8 engine producing upwards of 400 horsepower, and a six-speed sequential gearbox – but have freedom over suspension and aero development, using the silhouette of whichever production car they so choose to use.

While the Mother Chassis cars are a cost-effective alternative to FIA GT3 and JAF-GT300 cars, there is some concern of the future over the platform as two teams have dropped their MC cars in the last two seasons. But these cars are still really awesome machines – massively quick around corners, gentle on tyres, with enough downforce to overcome the power deficit to the GT3s.

Tsuchiya Engineering once again lead the charge for the Mother Chassis brigade, with their pink and white #25 Hoppy Toyota 86 MC by Dome. Following in the footsteps of team founder Haruo Tsuchiya, his son Takeshi Tsuchiya runs the operation as team director and chief engineer.

Tsuchiya Engineering won the first race for the Mother Chassis platform in 2015 and took the 2016 GT300 Championship, and have remained competitive in 2017 and 2018. But unfortunate incidents and mechanical gremlins have thwarted any subsequent championship challenges from the legendary privateer squad based out of Fujisawa.

Takamitsu Matsui, the protegé of Tsuchiya, returns for his fifth season with Tsuchiya Engineering. The young journeyman broke through in 2016 as he carried the team to their first championship with the 86 MC, but has struggled for consistency and confidence in the last two seasons.

His new teammate for 2019, after the departure of Toyota young driver Sho Tsuboi, is 29-year-old Kimiya Sato. Hand-picked by Tsuchiya after impressing him in Super Taikyu last year, Sato has spent the last four seasons with Team JLOC, scoring his first GT300 podium in October at Autopolis. Having bounced between Europe and Japan in single-seaters for years with mixed success, Sato is poised to break through in his first year aboard the Hoppy 86. 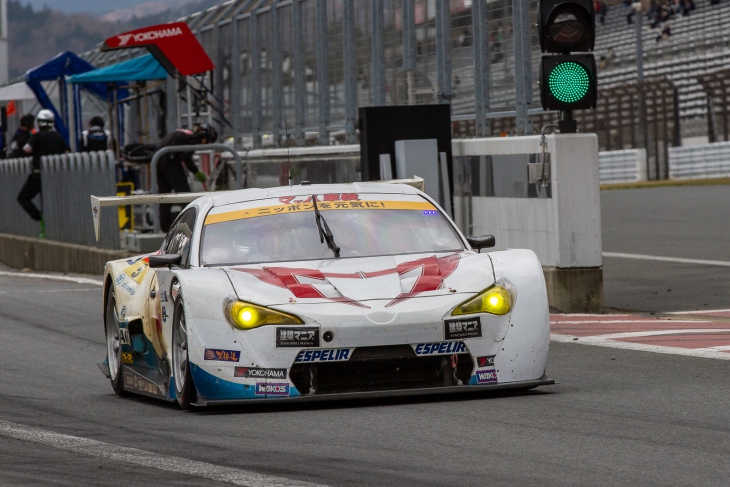 There are other Mother Chassis teams, including another Dome/Toyota 86 for Team Mach, based out of Fukuoka. Team owner Tetsuji Tamanaka keeps his impressive young driver lineup of 23-year-old local hero Natsu Sakaguchi, and 22-year-old Yuya Hiraki for 2019.

Over the last two seasons, the youth movement at Team Mach has led to some seriously impressive top-ten performances at their home track at Autopolis. They’ve had the potential for even bigger results though, and if the car proves reliable, the #5 Advics Mach Syaken MC86 has the drivers to contend for podiums or even a shock victory. 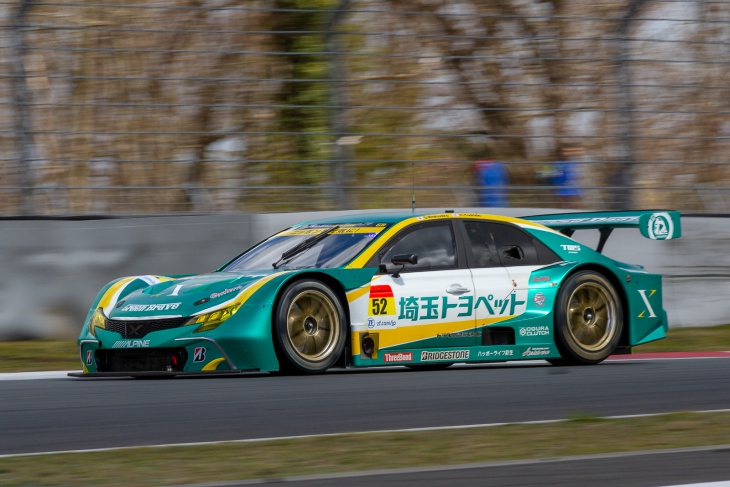 One Mother Chassis team with a lot of buzz around it this year is the green and yellow #52 Toyota Mark X MC of Saitama Toyopet GreenBrave, entering their third season in GT300. GreenBrave is best known for having a staff of dealership mechanics prepping their cars, and for being one of the fan-friendliest teams in the paddock.

They made two big changes in the off-season: First, the switch to Bridgestone tyres, they are the first Mother Chassis team to switch off the Yokohama tyres. Second, the arrival of 35-year-old Hiroki Yoshida, who had a breakout 2018 season in the #10 Gainer Nissan GT-R, as the journeyman driver finally had a chance in a competitive team to show his true pace.

Yoshida is joined by 44-year-old veteran Shigekazu Wakisaka, who has both GT500 and GT300 experience on his CV – and helped drive GreenBrave to their first top ten finish last September at Sugo. 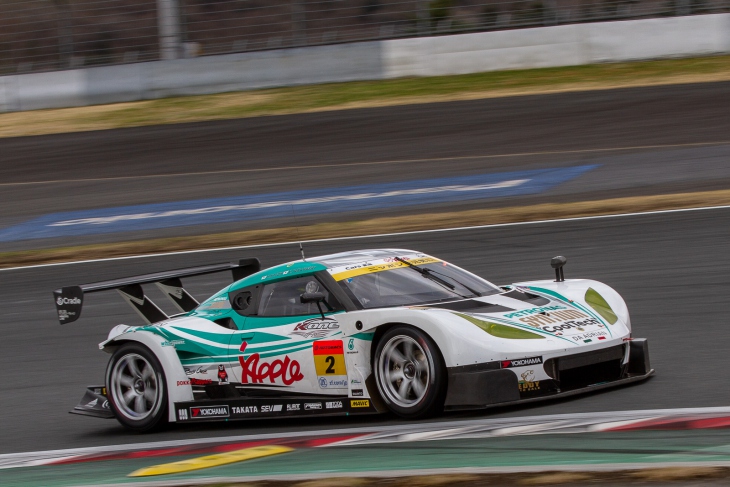 Last of the Mother Chassis runners is the Mooncraft Engineering-designed, mid-engined #2 Syntium Apple Lotus Evora MC of Cars Tokai Dream28. They are one of the last true Pro-Am teams remaining in what is becoming an increasingly all-Pro GT300 class.

A familiar duo for most of the last 15 years – including back-to-back runner-up finishes in the 2006 and 2007 GT300 Championships – 66-year-old gentleman driver Kazuho Takahashi and 51-year-old Hiroki Katoh hope to defy the trends and roll back the years. The Lotus is quick and nimble, and Katoh is still an absurdly quick workhorse of a driver even in the twilight of his career.

Takahashi, the owner of Honda Cars Tokai, has undoubtedly struggled to get to grips with the car. But what he lacks in pace amongst the rest of the GT300 field, he makes up for in sincere dedication to his love of motor racing. And that, by itself, is one of Cars Tokai Dream28’s most endearing qualities.