“It was a good qualifying. I could have had a better lap but it was still a good lap!” said pole-winner Kirmann.

Norma chassis were dominant here on pace, with seven of the nine M30s sitting in the top seven by the end, the first Ligier JS P3 down in eighth.

Sharing the front row of the grid in LMP3 will be the #39 GRAFF Norma, Adrien Chila another driver to improve late in the session and jump up to second with a 1:51.812.

The improvements late came after a red flag caused by debris stranded at Virage to Camp following contact between the #5 DKR Norma of Marcello Marateotto and the #23 United Autosports Ligier of Rob Hodes with seven minutes remaining. That set up a late surge of times when the action resumed.

Eventually, Mike Benham put Lanan’s Norma third with a 1:53.132, ahead of Charlie Martin who reeled off a couple of flying laps at the end, her best a 1:53.167 in the Racing Experience Norma. GRAFF’s #9 Norma ended up fifth.

The first of the Ligiers menahile, was the #18 BHK Motorsport JS P3 of Jacopo Baratto, who could only manage a lap over two seconds off the pole time.

In GT3, it was a dogfight for Pole, with the top three spots changing throughout the 15-minute session.

Eventually, the top spot went to Luzich Racing and its #71 Ferrari 488 GT3, Fabien Lavergne setting a 1:54.940 late on in the session to go three tenths clear of the #8 Kessel Racing Ferrari. 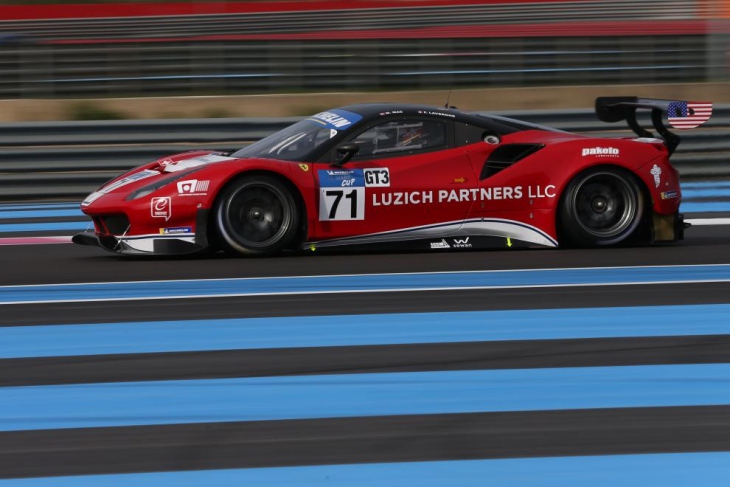 “He did an amazing job, the team have made a perfect car for us. It’s the first time for me and Fabien to work together, it’s a very good start to that relationship!” said Lavergne’s teammate Mikkel Mac.

“It’s a perfect to start the year with pole position. I made a small mistake on my lap, but it was enough,” added Lavergne.

Sergio Pianezzola was aboard the #8 Kessel Ferrari for the session and looked set for pole with six minutes to go with a 1:55.326. But it wasn’t enough, even after an improvement to a 1:55.286 just before the chequered flag, as Lavergne bettered his time moments after he crossed the line.

Third was the first of the other chassis in the new-look 10-car GT3 class, the Krypton Motorsport Mercedes AMG GT3. Stefano Pezzucchi took the wheel for the session and threatened to take pole multiple times before slipping to third at the end with a best time of 1:55.683.

The #51 Spirit of Race Ferrari and #88 Ebimotors Porsche completed the top five.