The #6 Ram Racing Mercedes that had topped FP1 was late joining proceedings in FP2, but Macleod wasted no time getting up to speed and was soon at the top of the screens once again, with a time of 1:35.561.

Adam Christodoulou then made it a Mercedes 1-2 with his 1:35.689 in the Team Abba Racing machine shortly afterwards, shuffling the Thiim car down to third.

Jonny Cocker in the other Barwell Lamborghini (the #69 shared with Sam de Haan) then went even quicker with a 1:34.827 to make it a Barwell 1-2 with just over five minutes of the session to run.

Thiim was a late improver to go fourth-fastest on a 1:35.302, and then snatched third from Christodoulou with a 1:35.178, but the Dane couldn’t find the pace to eclipse the Lamborghini duo, who ended the session first and second.

Elsewhere in GT3, the Balfe Motorsport McLaren had to sit out the session due to electrical issues, while the #7 Team Parker Bentley also spent a good chunk of the morning’s second session in the garage, following earlier power-steering problems. 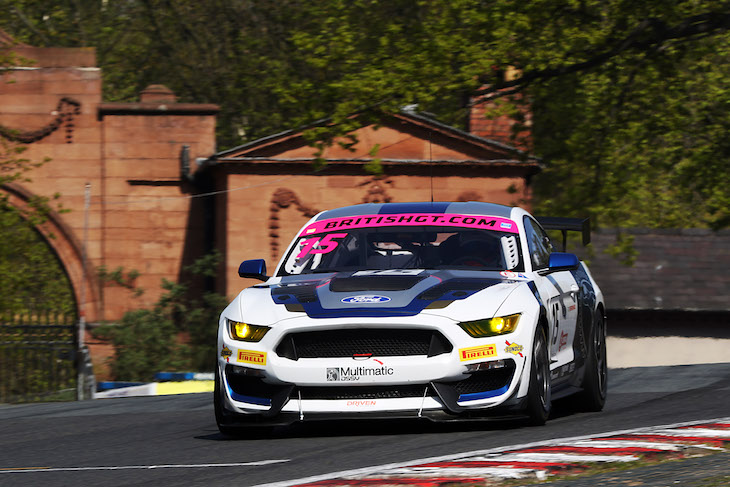 In GT4, following the morning session’s ABS issue that restricted running, the #15 Multimatic Mustang (above) was back out and going strong in the hands of Scott Maxwell in the early stages.

The session thus ended with the #15 Mustang in P1, ahead of the #11 Aston, with the second Multimatic Mustang (the #19 of Americans Chad McCumbee and Jade Buford) going third-fastest in GT4 on a 1:44.110, shuffling Canning’s Aston down to fourth in the process.

Once again there were no offs for cars in either class and no red flags. Qualifying for Monday’s pair of races follows at 3:15 pm.