In GT4, pole for both races went to the #15 Multimatic Ford Mustang, with Scott Maxwell going fastest in the first session and his co-driver Seb Priaulx topping the second.

Temperatures had climbed to 22 degrees by the time qualifying for the championship’s opening round of 2019 got underway, at 3:15pm on Easter Saturday.

In the opening, am-driver session, Loggie’s time of 1:35.061 was nearly six-tenths clear of his closest challenger, Ryan Ratcliffe in the #7 Team Parker Bentley (the highest qualifying of the two Silver Cup cars running this weekend).

De Haan’s co-driver Jonny Cocker kept up Barwell’s generally strong showing all round by putting the #69 car in P5 for race two with a time of 1:34.318, ahead of the sixth-place qualifier for race two, Nick Thiim aboard the #2 TF Sport Aston Martin (who went round in 1:34.413).

The #15 Multimatic Mustang (below) was unstoppable in both GT4 session, with Maxwell clocking a 1:43.553 in the first session and Priaulx a 1:42.384 in the second to lock out P1 for both of Monday’s races. 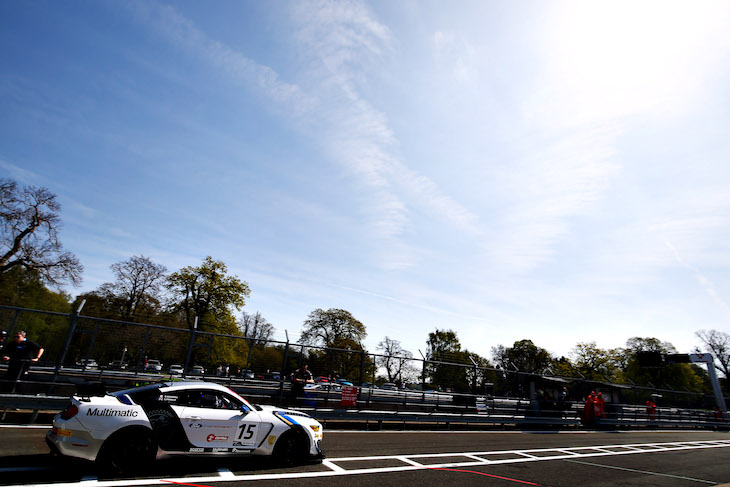 In the first session, Maxwell’s closest challenger was his team-mate Jade Buford in the sister #19 Mustang, who managed a 1:43.656 to make it a Multimatic front-row lockout.

Jordan Collard (#5 Tolman McLaren) and Tom Kibble (#95 TF Sport Aston) qualified P5 and P6 respectively in the Am session, while Kelvin Fletcher was the quickest Am driver in a session dominated by quick young silvers. The #11 Beechdean Aston Martin driver recorded a 1:44.605 to line up 10th overall in the GT4 ranks for race two.

The second GT4 qualifying session saw Scott Malvern break the Multimatic Mustang front-row stranglehold by putting the #66 Team Parker Mercedes into P2 alongside Priaulx, although Malvern’s time of 1:43.530 was a yawning 1.146 seconds short of the Ford driver’s 1:42.384 (a new GT4 qualifying record).

The second row for race two is made up of Mikey Broadhurst (in the #77 Fox Motorsport Mercedes) and Fletcher’s co-driver Martin Plowman, who set times of 1:43.728 and 1:43.773 respectively.

Tom Canning grabbed P5 for the #97 TF Sport Aston Martin, while there was a very impressive sixth-fastest time overall from Matt George aboard the #44 Invictus Games Racing Jaguar F-Type.

British GT now has its traditional Easter Sunday day off, before reconvening for morning warm-up and a pair of races (at 11:15am and 3:35pm) on Easter Monday. You’ll be able to watch live-streaming video of both right here on DSC.