Sam de Haan delivered on the potential shown during 2018 to take his maiden British GT win in race two of 2019 at Oulton Park on Easter Monday. It was also the first British GT win for his co-driver and coach in the #69 Barwell Motorsport Lamborghini, Jonny Cocker, since Thruxton in 2007.

The race was action-packed despite a long safety-car period that began during the GT4 pit window; that class was eventually won by series debutants Seb Priaulx and Scott Maxwell in the #15 Multimatic Ford Mustang that had started from pole.

Polesitter Phil Keen got away well in the #72 Barwell Lamborghini and immediately set about establishing a cushion, but things were more disputed behind him, where Adam Christodoulou managed a great start in the #8 Team Abba Racing Mercedes, overhauling Calum Macleod in the #6 Ram Racing car for second. 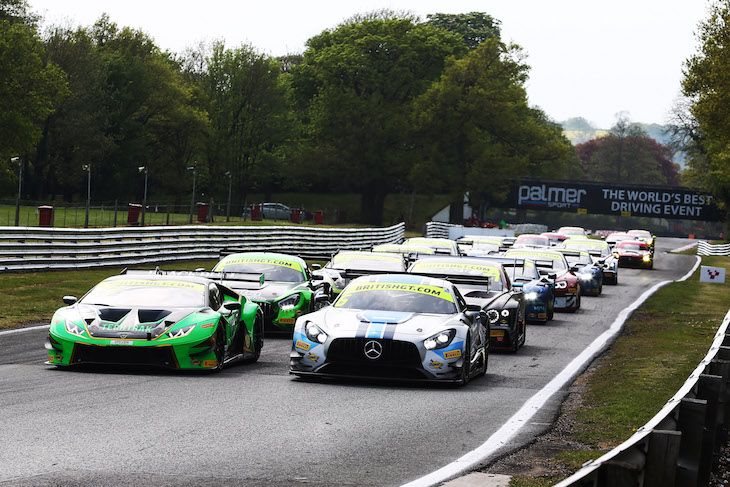 The safety car made an appearance before too long, however, due to the #77 Mercedes in GT4 becoming stuck in the gravel at Cascades. That saw Keen lose the small margin that he’d built up, but he had it back up to just under five seconds by the time the GT3 pit window opened.

Behind the leading duo, race-one winner Seb Morris had got the #31 JRM Bentley into third ahead of Macleod’s Mercedes, with Nicki Thiim running fifth in the #2 TF Sport Aston Martin and Cocker sixth in the #69 Lamborghini.

Race-one podium finisher Bradley Ellis in the #96 Optimum Motorsport Aston was the first of the GT3 runners to stop, handing the car over to co-driver Ollie Wilkinson. The full set of GT3 stops had been completed, but the GT4 runners were still stopping when the safety car had to be called out again.

The cause was Mark Farmer getting the #2 Aston beached at Island shortly after he’d emerged from the pits, with the rear wheels being elevated off the tarmac and thus preventing the car from moving under its own power.

Extricating the Vantage took quite some time, and there were just 15 minutes on the clock when the green flags flew again. That was plenty of time for a rollercoaster ride of action before the chequered flag, however.

The first moment came from race-one winner Rick Parfitt in the JRM Bentley, who went from hero to zero in a couple of corners, ending up nose-first into the tyres at the chicane having just taken fifth place from Andrew Howard in the #99 Beechdean Aston on the way out of Lodge. Parfitt did manage to rejoin, however, and the car finished last of the GT3 runners.

Up ahead, several laps of sustained pressure from de Haan on Richard Neary in the Abba Mercedes that had been started by Christodoulou finally paid off, as the Lamborghini driver passed cleanly for the lead. At the same time, Howard moved into fourth ahead of Adam Balon in the #72 Lamborghini.

Adrian Willmott in the #9 Century BMW was in the mix, too, until a stop-go penalty was applied for the car speeding in the pitlane earlier on, demoting him and co-driver Jack Mitchell to 11th at the flag.

As the clock wound down, Ian Loggie was on course to make up for his race-one disappointment with a podium finish, but he ran wide at Cascades, winding up seventh overall at the finish. His misfortune played into the hands of Howard, who now moved up into P3 in the car started by Marco Sorensen. He’d stay there until the finish.

Fourth, therefore, went to the Keen/Balon #72 Lamborghini, with Dominic Paul shrugging off a loose rear bumper to bring the #3 Century BMW home fifth having taken over from Ben Green at the stops. Ollie Wilkinson crossed the line sixth in the #96 Aston, meanwhile, ahead of the recovering Loggie.

The final pieces of drama came at the very end. First, Ryan Ratcliffe went straight on in the #7 Bentley (which had already spent 13 extra seconds in the pits as a penalty for Ratcliffe’s race-one incident) after apparently suffering a puncture. Then, Graham Davidson found the barriers at Cascades in the #47 TF Sport Aston. Fortunately, neither driver was injured, but both had had weekends to forget.

Following the deployment of the safety car to cover the aftermath of Ash Hand in the #97 TF Sport Aston’s contact with Mikey Broadhurst in the #77 Mercedes at Cascades, GT4 was delivering closer battles than GT3 in the early stages of the race. 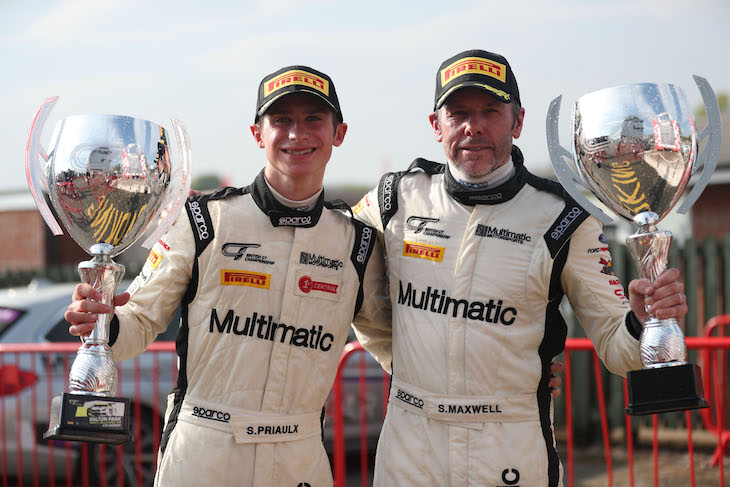 Almost the whole top 10 were circulating the Cheshire track nose-to-tail in a train, with polesitter (and eventual winner, above) Priaulx in the #15 Mustang leading from Scott Malvern in the #66 Team Parker Mercedes and Matt George holding third in the #44 Invictus Games Racing Jaguar.

Running fourth, fifth and sixth early on were Martin Plowman in the #11 Beechdean Aston Martin, Josh Smith in the #4 Tolman McLaren and his team-mate Lewis Proctor in the sister #5 car.

Smith then got ahead of Plowman, and HHC’s Luke Williams snuck ahead of Proctor, before the GT4 pit window opened. Right before it was due to, however, Academy Motorsport’s Will Moore (#62) was spat out of the battling pack on the run out of Old Hall, sliding down the hill and clouting the barrier.

The safety car that was deployed because of Mark Farmer’s GT3 spin came out as about half the GT4 field were either in the middle of their stops or yet to stop, effectively putting some of the field a lap down through no fault of their own.

This led to confusion later on when green-flag racing resumed, with seemingly no communication from their teams or race control to Tom Canning in the #97 Aston and Ben Hurst in the #61 Aston that they were being lapped and should give way to the leaders.

Both of those cars drove defensively while being lapped by the top-three battle, initially consisting of Malvern’s co-driver Nick Jones in the #66 Mercedes, George’s co-driver Steve McCulley in the #44 Jaguar and Priaulx’s co-driver Scott Maxwell in the #15 Mustang. 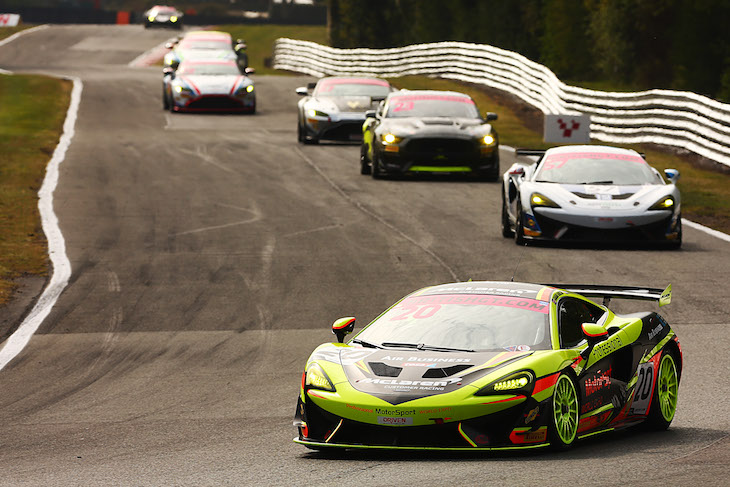 Jones, however, spun from the lead at the exit of Hislops in the closing laps, handing P1 to Maxwell. The latter then came under pressure from a charging Graham Johnson (above) and Kelvin Fletcher in the #20 Balfe McLaren and #11 Beechdean Aston respectively.

Maxwell held on for the win ahead of Johnson, though, and an off for Fletcher towards the end handed third place back to McCulley, meaning a superb overall podium result for the Invictus squad to go with their earlier Pro-Am victory.

Jones’ spin dropped the #66 Mercedes to fourth at the flag, ahead of Fletcher and then Jordan Collard in the #5 Tolman McLaren, who finished sixth. The HHC McLaren of Williamson and Tom Jackson was seventh.