It hasn’t taken long for 2017 British GT champion Rick Parfitt’s decision to ‘unretire’ and ‘get the band back together’ with his co-champion from that year Seb Morris to pay off.

The duo made the best possible start to their 2019 comeback campaign at Oulton Park on Easter Monday morning by winning the first of the day’s two races, following a coming-together early in the race for the two front-row-starting cars.

In GT4, meanwhile, HHC Motorsport’s youngsters Callum Pointon and Dean MacDonald ran a close-fought race to head home a fine 1-2-3 result for the McLaren 570S at the flag, after the pole-sitting Mustang was hit with a 30kg weight increase following its dominant qualifying form.

After a clean opening couple of corners, there was a spin for Mark Farmer in the #2 TF Sport Aston Martin on lap two, but worse was to follow for polesitter Ian Loggie in the #6 Ram Racing Mercedes. 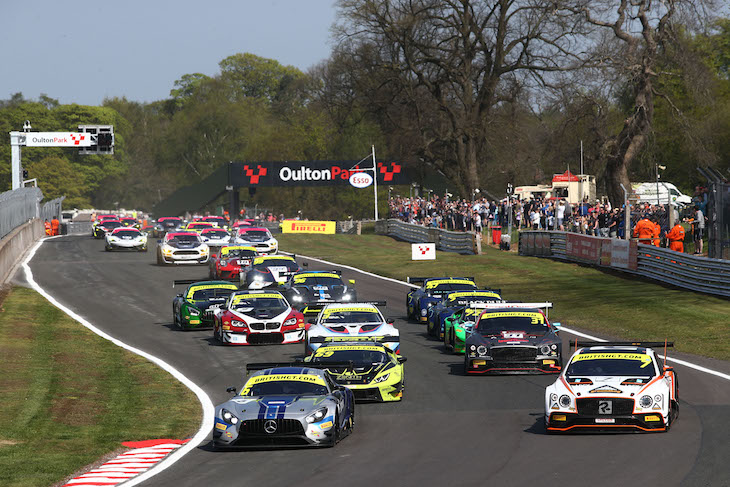 Approaching Hislop’s chicane, a pursuing Ryan Ratcliffe in the #7 Team Parker Bentley hit the brakes a fraction too late and locked up, leading to a collision with the side of Loggie’s car as the latter turned into the corner, ending the race for both entrants on the spot.

A contrite Ratcliffe later admitted the fault was his, saying: “Ian hit the brakes a tiny bit earlier than he had done the last lap, which caught me by surprise and I locked up. It was either go into the back of him or down the side. I can understand he and Calum [Macleod] will be angry; I just want them to understand it wasn’t on purpose.”

The contact left Loggie’s Mercedes stranded in the middle of the track, so the decision was taken to send out the safety car to allow for its recovery. Farmer suffered further woe with a low-speed bump into Loggie’s stationary car but was able to keep going, albeit some way down on the GT3 leaders.

Having started fourth, Parfitt benefitted from the crash and now led behind the safety car, ahead of Sam de Haan in the #69 Barwell Lamborghini, followed by Dominic Paul and Adrian Willmott in the #3 and #9 Century BMWs, Adam Balon in the #72 Barwell Lamborghini, Richard Neary in the #8 Abba Racing Mercedes and British GT debutant Ollie Wilkinson in the #96 Optimum Motorsport Aston.

After the safety car withdrew, the Century BMW pair had a robust battle for third through the end of lap seven and onto lap eight, leaving both cars still running but carrying some battle scars.

Seeing to the damage delayed the team at the pit stops, which meant Balon’s co-driver Phil Keen emerged behind Morris once the GT3 pitting had been conducted; Wilkinson’s co-driver Ellis vaulted into third at the same time.

Jonny Cocker took over the #69 Lamborghini from de Haan and emerged fourth, but despite sustained pressure on Ellis for almost the entire second stint, he couldn’t, in the end, find a way past, meaning a memorable podium finish for Ellis and Wilkinson to mark their series debut.

Up ahead, Keen was on fresh tyres, while Morris in the Bentley was making do with a set that had previously been used for qualifying runs. He also survived a biff from Seb Priaulx in the #15 GT4 Mustang, but although Keen closed to within less than three seconds at times, Morris’ lead never looked under serious threat and he crossed the line victorious after 35 laps.

“It’s good to be back, we’re just carrying on where we left off,” a delighted Morris said upon stepping out of the car. “We’ve been weak on Balance of Performance this weekend, but we’re not blaming anyone, it’s our first time running the new car. The crash for the leaders was unfortunate, but the main thing is that we were there to take the win.”

Behind fourth-place man, Cocker, Ben Green and Jack Mitchell brought the Century BMWs home fifth and sixth following their co-drivers’ earlier scrapping, while Jonny Adam and Graham Davidson got their partnership in the #47 TF Sport Aston Martin off to a solid start with seventh.

Adam Christodoulou brought the #8 Mercedes started by Neary home in eighth, ahead of the Andrew Howard/Marco Sorensen-piloted #99 Beechdean Aston.

Nicki Thiim in the #2 TF Sport Aston was the final GT3 runner across the line after Farmer’s earlier drama, ahead of Michael Igoe and Adam Wilcox in the GTC-class WPI Motorsport Porsche.

Polesitter Scott Maxwell (#15 Multimatic Ford) dropped to third in the early laps before the safety car, meaning it was his team-mate Jade Buford in the #19 that led under yellows, ahead of third-place qualifier MacDonald in the #57 HHC McLaren (below). 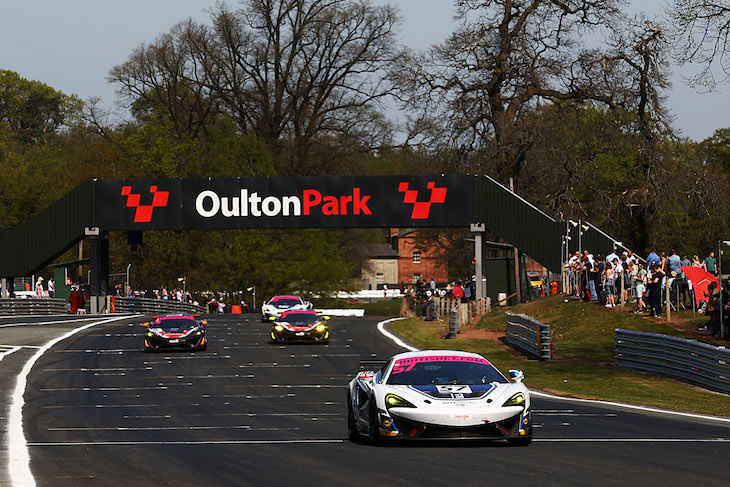 They stayed in that order for much of the opening stint, with Tom Jackson (#58 HHC McLaren), Patrick Kibble (#95 TF Sport Aston) and James Dorlin (#4 Tolman McLaren) running fourth, fifth and sixth in the opening stages respectively.

Jordan Collard in the other Tolman car was soon on a charge from seventh in class, however. The son of Rob and brother of Ricky had hauled his 570S into fourth by lap nine, shuffling Kibble to fifth, Jackson to sixth and Dorlin to seventh in the process.

Just before the GT4 pit window opened, second-place MacDonald got very close to passing leader Buford, with side-to-side contact at Deer’s Leap at one point, but no on-track change in position.

When the field re-emerged after the GT4 pitstops (taken after the conclusion of the GT3 window this season, in order to avoid excessive pitlane congestion), MacDonald’s co-driver Pointon was in the lead, ahead of Josh Smith and Lewis Proctor in the #4 and #5 Tolman cars.

Buford’s co-driver Chad McCumbee was the highest-running Mustang after the stops, having taken fourth from HHC’s Luke Williams on track, but the latter retook the position in the closing minutes.

That would prove to be a vital move, as with just over a lap to go, there was heartbreak for Proctor when smoke and flames began to lick from the exhaust of the #5 570S. It at first seemed he may have been able to make it to the flag, but eventually he had to pull off and bail out of the smouldering car.

This meant the McLaren 1-2-3 would be scored by the #57 HHC, #4 Tolman and #58 HHC cars instead. McCumbee held on to give the Multimatic Mustang fourth on its British GT debut, ahead of Kibble’s co-driver Josh Price in the #95 (the highest-finishing Aston in GT4). 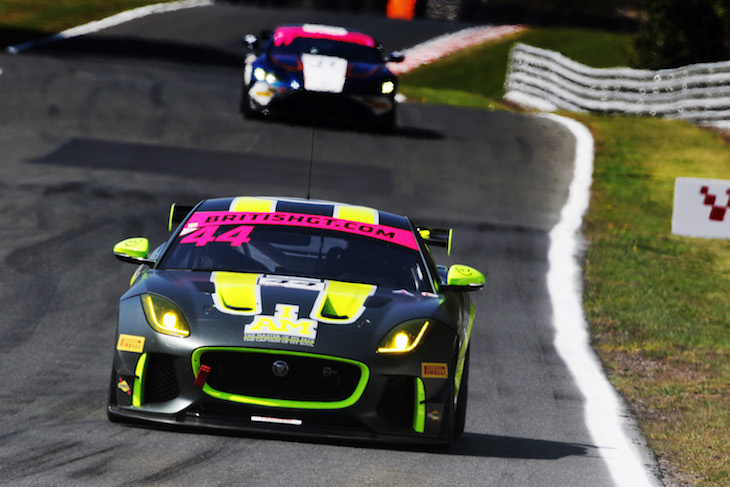 Matt George and Steve McCulley drove a fantastic race to score sixth in GT4 overall and first in GT4 Pro-Am in the sole Invictus Games Racing Jaguar present this weekend (above), with Kelvin Fletcher and Martin Plowman in the #11 Beechdean Aston Martin second in Pro-Am and seventh overall.

Graham Johnson and Michael O’Brien completed the Pro-Am podium and finished eighth overall, while the GT4 top 10 was completed by the #35 Connor O’Brien/Jack Butel Optimum Aston and the #77 Mark Murfitt/Mike Broadhurst Mercedes.

Broadhurst in the latter car came under pressure from Priaulx in the #15 Mustang in the closing stages, but the Ford driver lost the back end while trying to squeeze down the inside at Cascades, colliding with the tyre barrier but managing to limp the car home eventually.

Race two follows this afternoon at 3:35 pm and once again you can watch it here live on DSC.