This week saw an extraordinary opportunity for DSC to attend and observe a three day test at Motorland Aragon with the Ginetta LMP1 design and development team, the crew, together with drivers Charlie Robertson, Mike Simpson and James Jakes, working to develop the now AER-engined G60 LT P1 after a debut season with customer team CEFC TRSM that has been plagued with commercial and performance woes. 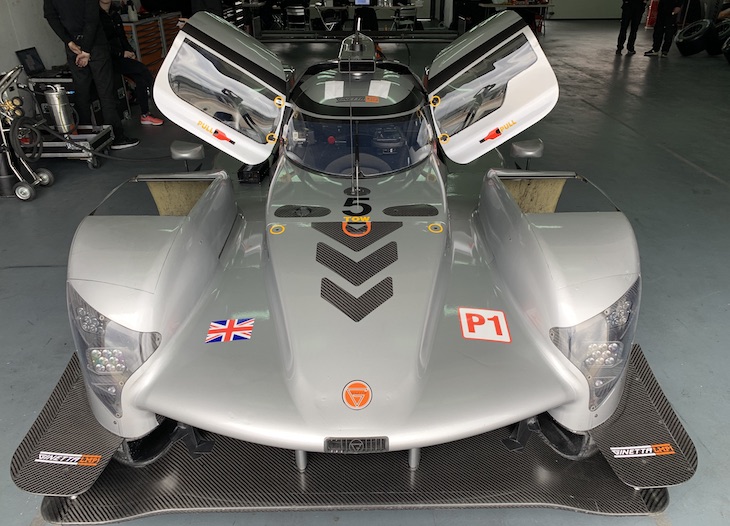 The performance deficit, seen starkly at the Le Mans 24 Hours last year, thus far the scene of the Ginettas only race start, were laid squarely at the door of previous engine supplier Mecachrome, with the data at Le Mans showing the team and the factory that the power deficit to the opposition in LMP1 was well into triple figures!

There were though serious signs that the design of the Ginetta was potentially very competitive, its speed through the massively demanding Porsche Curves, as great a test of handling and aero effectiveness as the Circuit de la Sarthe possesses, was very much ‘top of the shop’.

The decision was made very soon after Le Mans that the engine would be replaced by AER’s turbo V6 P60B powerplant, already in LMP1 competition with SMP Racing aboard their pair of BR1 cars. 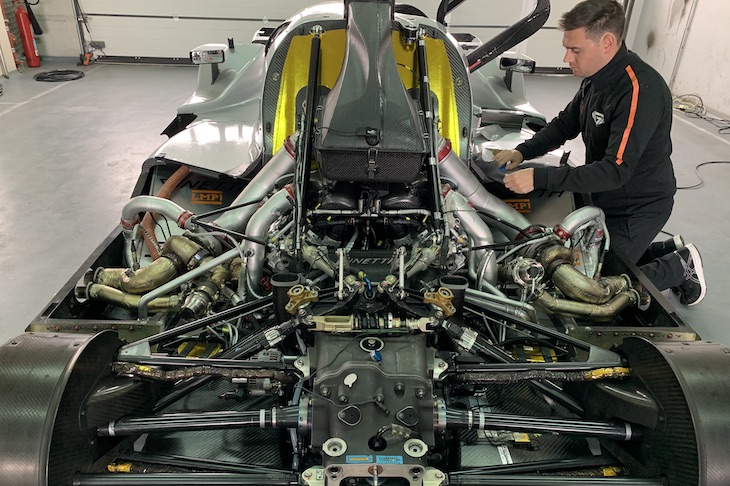 Since then the AER powered car, one of a pair ready to roll, had been tested only once, a half day at Silverstone with Alex Brundle and James Jakes, which proved the installation and baseline performance, but did not help Ginetta with a customer programme for the current WEC season that had stalled.

The hunt was now on for new customers for next season, and the Aragon test formed a key part of proving the product as the deadline nears for entries for the 2019/2020 WEC season.

Michelin was undertaking a tyre test at the picturesque, and very challenging, circuit, a combination of very technical uphill medium speed corners, the astonishing downhill corkscrew, think more open and longer than its namesake at Laguna Seca, and a long, very long, back straight before the tight but super-quick final turn.  The test greeted both Rebellions, a solo SMP Racing BR1 and a pair of LMP2 teams, United Autosports in one of their Ligiers, and a hard-working Signatech crew who were pounding around in the #36 Alpine. 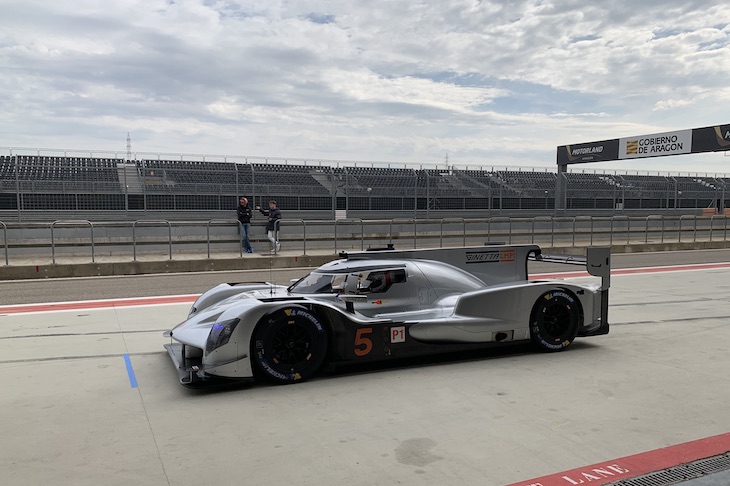 As an invitee of one team at a closed test, it simply wouldn’t be correct to comment in detail about the programmes of the others present other than to confirm the reports elsewhere that Rebellion tested with a revised low drag kit as well as running with their regular bodywork.

Onto the Ginetta effort and when the group travelling from Yorkshire arrived on Monday afternoon the car, this the #5 chassis from Le Mans last year, was already just about ready to go, under the watchful eye of Ginetta’s Technical Director Pete Smith, and the car’s designer Andy Lewis. 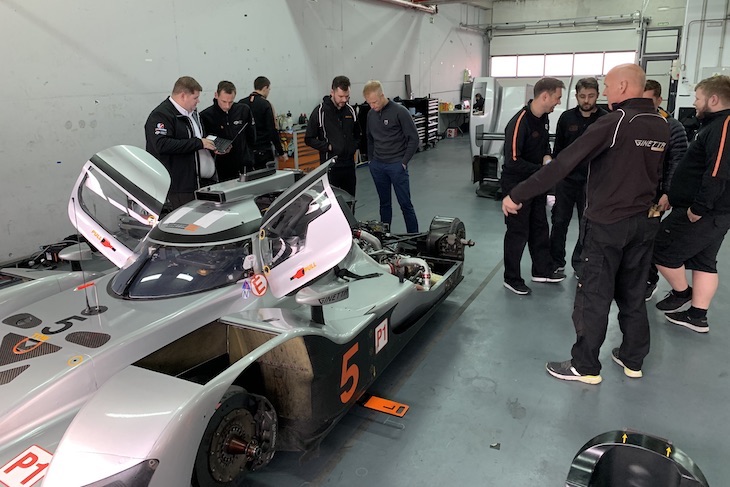 Also on hand were veteran race engineer Alan Mugglestone, engineers from AER, Bosch data engineers and, of course, an attentive Michelin tyre engineer.   After a track walk with the drivers and Lawrence Tomlinson, a real chance to see the challenges of the circuit close to hand, it was time to get some sleep, there’d be precious little for the remainder of the week!

Tuesday morning dawned and with the track opening at 9 am there was an 8 am meeting with the engineering staff, and the small 4-man crew drawn from Ginetta’s production staff (Ginetta has no in-house race team) to discuss the proposed programme for the day.   The whole three days would prove the adage that the rain in Spain does indeed fall (mainly) on the plain, showers, light and heavy, interrupting proceedings several times, though the opportunity was taken on Wednesday to get the car’s first real wet-weather running, more of that later though!

In fact, the very first laps were made in greasy conditions, Mike Simpson entrusted with systems checks and some fine-tuning teeing up a trouble-free first day that soon saw times tumbling.   The programme for the day though was not about speed, but rather was about a catalogue of systems and installation checks, data calibration and, of course, tyre data to be undertaken, it would be the first of three days of short 5-7 lap runs, a pattern replicated by the other teams present.

Interspersed into that little lot were a raft of set-up changes prompted by Alan Mugglestone which Mike Simpson later observed had seemed “extreme, but proved to be absolutely transformational!”   It became very clear, very quickly though that the Ginetta was performing very well! The times were coming, as was the consistency. By Tuesday afternoon the pattern for the week was determined, work through the job list over the first two days, then go for real pace on the final day. 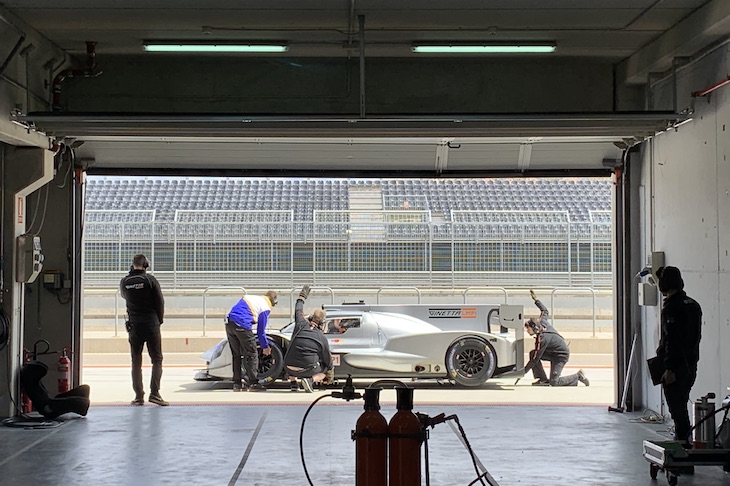 The level of interest being shown by those present in the Ginetta was palpable, more than one well-known name popping by in the bar after running was done, or over breakfast, to observe how impressed they were with progress, and every time the car went out there were plenty of interested observers, as the results came, the programme was honed, on all bar one occasions in a positive direction.

With Charlie Robertson aboard the pace was coming, already on day one faster than the Rebellions, and well in touch too with the SMP car, and this with boost dialled down by 10% and without the development Michelin rubber. 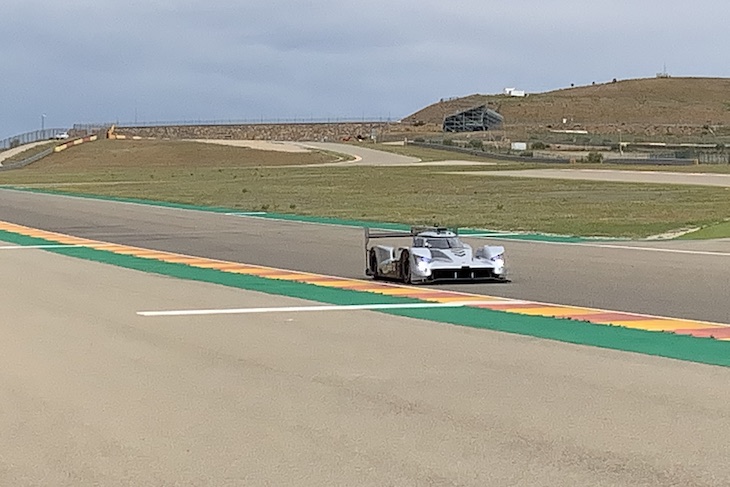 Straight line speed was excellent too, the car effectively restricted to 345 kph, it was grazing that mark regularly with all three drivers aboard as the brakes were dabbed at the end of the main straight.

In addition to the three drivers present for the full test, two others were due to run on Wednesday too, Ollie Webb and Anders Fjordbach, an ideal opportunity to get some feedback about the Ginetta in relation to current LMP1 and LMP2 machinery. Both drivers were eager to learn more about the programme, and both arrived mid-afternoon on Tuesday as the test was gathering momentum.  Seat fittings and pedal adjustments were sorted and all were ready to go as Wednesday dawned, but the weather would have her say! 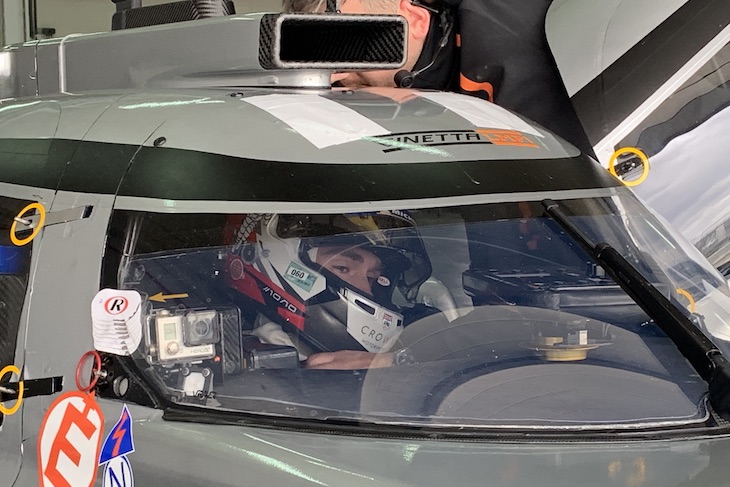 Early fog developed into an on/ off drizzly day, some early running cancelled, and eventually Ollie would go out for short run in the wet, again the performance was very encouraging, the car faster in those conditions than the other LMP1s, the pace again coming steadily, but then in came the car off schedule, the car finding neutral above fifth gear.   Immediate physical investigations found no sign of the root cause, and whatever could be changed, was changed, very swiftly, the problem though was still there, confirmed by another short run from Webb, and on a single lap, in the wet, from Fjordbach, it was an early finish for Wednesday! 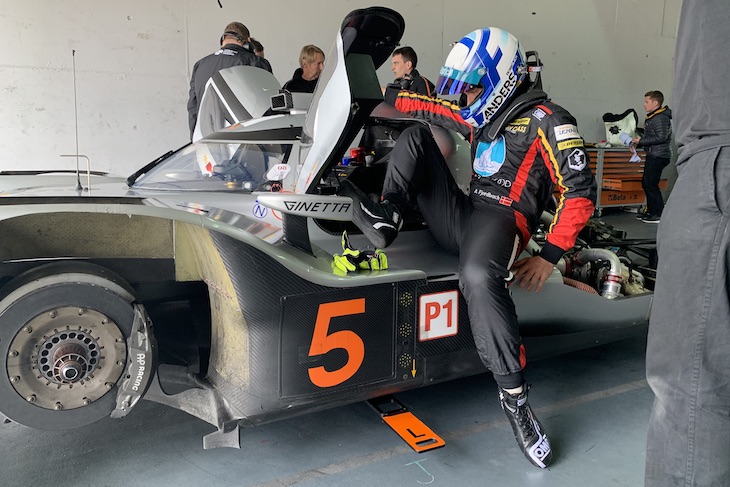 The Ginetta boys though got to work and fixed the issue (minor glitch with gearbox internals) in time for dinner, Sadly Ollie and Anders couldn’t stay for day three, Webb due to shake down the now Gibson-engined ByKolles, Fjordbach on Audi corporate duty at Jarama. 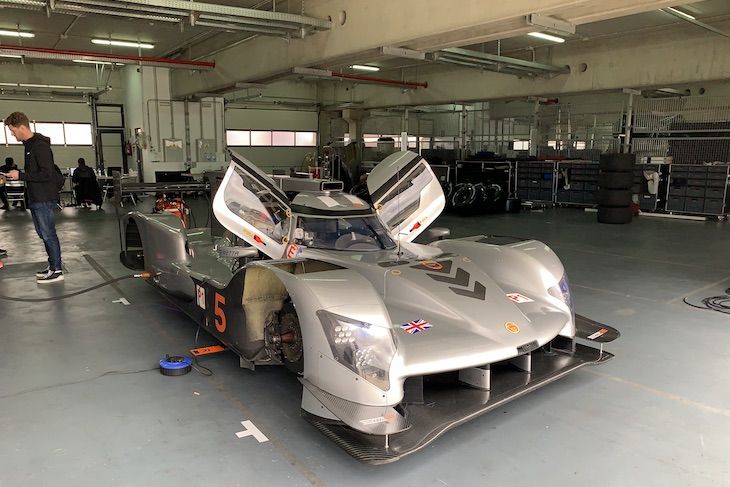 That left Charlie Robertson, Mike Simpson and James Jakes to undertake the performance running on Thursday and, after yet more pesky showers, it was Robertson, the 2015 ELMS LMP3 champ, that was entrusted with the car for the major push for lap times.

The SMP and Rebellion teams had completed their programmes after Wednesday but their times had left a benchmark for the Ginetta. At that point, the G60 sat third quickest of the LMP1s, one of the Rebellions bettering its best time on Wednesday afternoon.

The very first Thursday run though would see the Rebellion’s time eclipsed, the Ginetta into the 1:18s not once but twice in a 5 lap run, still on the older-spec front Michelins.  The mark set by the SMP Racing BR1 on Wednesday was a 1:18.605 and the second run of the day saw Charlie come oh so close, a 1:18.626, just 0.021 back, with his fastest potential lap hampered as he caught an LMP2 car on track. 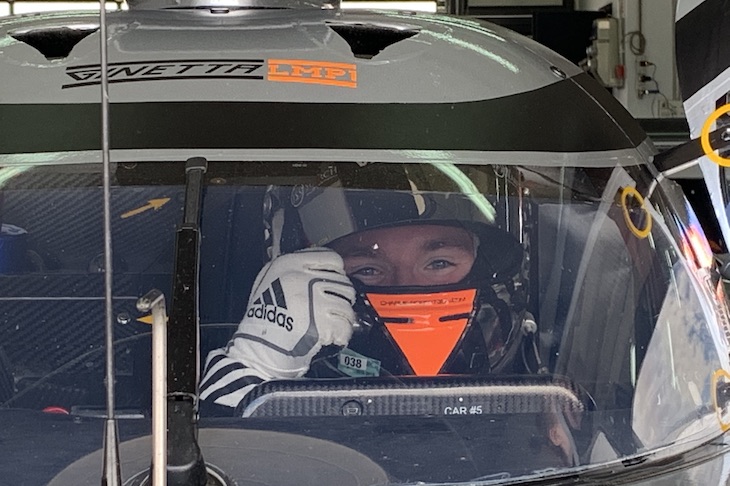 The sector times from that effort though indicated that the potential time for the Ginetta could/ should have been 0.3 seconds faster, a 1:18.3 very much in the sights of the G60.

It would though be the high point, a sharp shower brought a further delay and whilst more laps in the 1:18s would come, the best time would not be eclipsed.

“That was hard work but the performance as always there,” said Robertson after his third and final run of the day.

“We were very happy with where the car was straight out of the truck but the changes that Alan made were excellent and from there the tweaks always took us forward.”

Mike Simpson and James Jakes were equally effusive:   “The whole test has been a real buzz,” said Simpson. “Not just because we have had the results, but because everyone involved has such positivity about what is clearly an exceptional car. There’s no doubt whatsoever there is a lot more to come, what this car needs now is a team to get hold of it and prove that on track.” 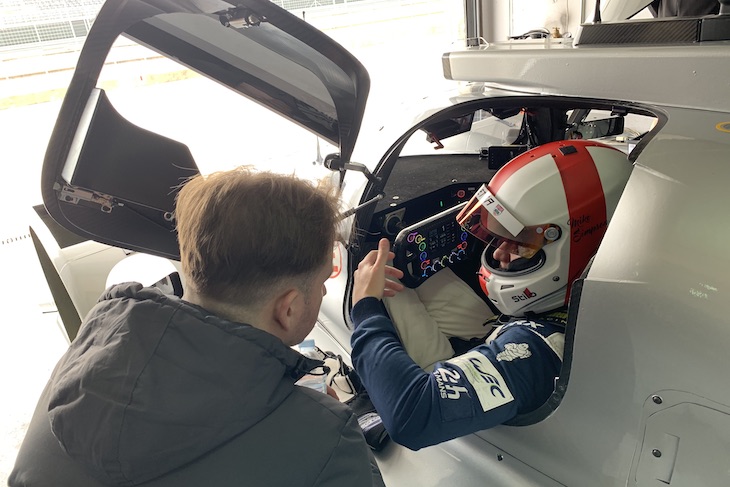 “There is a frustration after a test like that,” said IndyCar podium sitter Jakes. “But the frustration comes from knowing that even more time here would bring real results. That is an excellent race car, predictable, progressive, with excellent balance. The mark of any race car is how you feel about it when you get out and I can’t wait to get back in!” 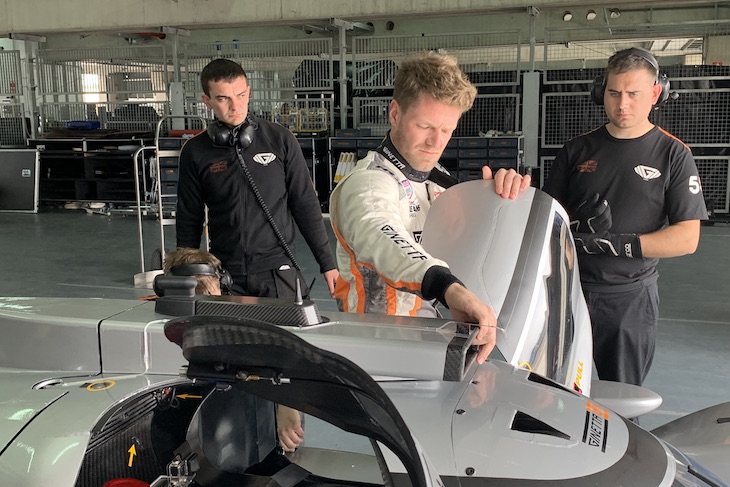 Across the test the team completed well over 170 laps, closing in on 1000 kms, with one mechanical issue, and with a pace that was right on the money with the other LMP1s present, with drivers who have little LMP1 experience.

Post-test Lawrence Tomlinson was, understandably, highly enthused: “It’s been a really successful test. Of course, we have confidence in the car but it is fantastic to see that confirmed not only by its own performance on the track but also by our performance against our peers.

“Not only has the car proved to have the pace that would put it amongst the fastest in the class, but it has also proved too that the performance is repeatable, our stints throughout the test, in the dry and in the wet, were consistent as well as quick.

“It’s already clear that the car is eligible for the next two seasons in the WEC, and as things stand that might well be longer!”

Better still, judging from several exchanges during the test there is clear interest in getting a Ginetta onto the FIA WEC grid for the 2019/ 20 season from more than one party, and with the Ginetta Chairman’s commercial dander up again on the project there are deals to be done and more significant testing being planned. 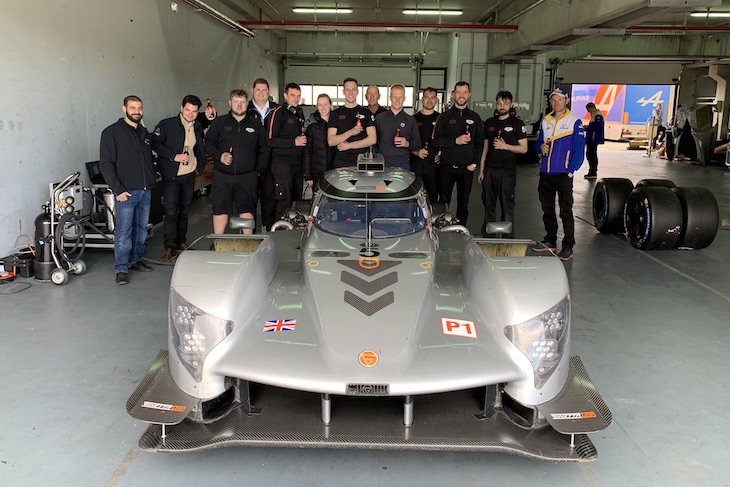 Whilst the clock ahead of the May 21 deadline for WEC entries to be submitted for next season is ticking loudly there is some reason for optimism that the LMP1 field might just see a new name against an entry, watch this space!