After VLN2 saw wintry weather cause the race to be abandoned, VLN3 too saw nature take a stab at spoiling the fun in the 4-hour race.

Manthey Racing though would have different ideas, and Nick Tandy in particular would star as the local team came home with a dominant result. It would not though, for somewhat complex reasons, be the Manthey 1,2,3 that the team would celebrate across the line.

VLN3, the 61st ADAC ACAS H & R Cup, saw the race start wet, and get very considerably wetter in the first hour with multiple incidents right through the 180+ car starting field accounting for a number of significant runners in the overall, and in class contention, almost 40 cars would not make it to the checkered flag. 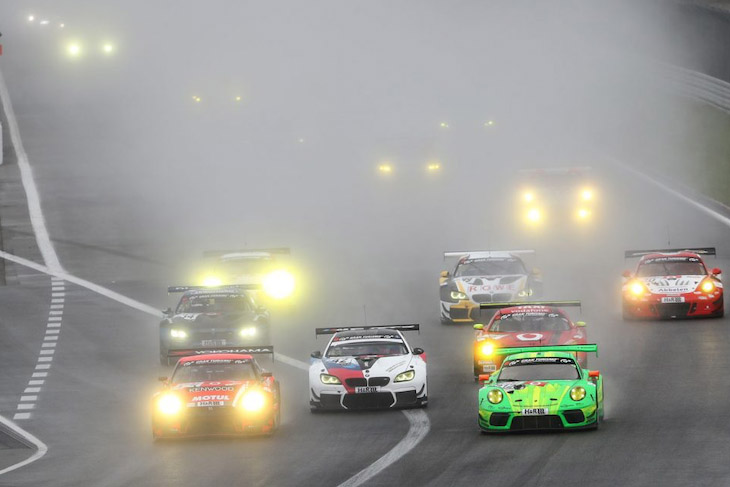 Tandy though would revel in the terrible conditions, and after seeing off the immediate challenge from team-mate and polesitter Kevin Estre, plus the fast-starting #42 Schnitzer BMW M6 of Sheldon van der Linde he’d pull out almost a minutes lead on pace in the #912 Porsche 911 GT3R that would only be overhauled on the pit stop cycles, a stellar stint would seal a lead that would prove to be impossible to claw back for the rest, and indeed would later be extended, this despite team-mate Richard Lietz having to make the run for home on a drying track looking after fast deteriorating wets:

“A fantastic result”, said Lietz after the race with a smile in his face. “The last laps, when the track got dry, were really an adventure because my rain tyres were very much worn.”

Tandy added: “The beginning of the race, too, was difficult. There was a lot of water on the track and we had partly heavy aquaplaning. I went sidewise a few times and was quite lucky here and there. Apart from that, our Porsche was perfect today.” 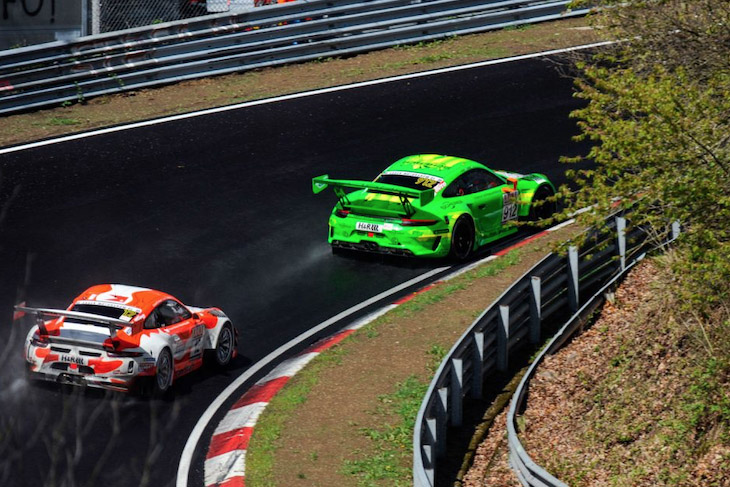 Otto Klohs, too, was happy with his first participation in the VLN in 2019: “Dennis turned out to be a true specialist in the rain. So at some point, we took the decision to let him out on the track as long as possible. In the rain, it is particularly important to have a good knowledge of the conditions on the circuit.”

The #911 Manthey Porsche meanwhile had a topsy turvy sort of day. Kevin Estre gained pole position but at the start accelerated too early and got a stop-and-go penalty imposed by Race Control.

The car was fighting its way back into the top group before Christensen, at the end of his stint, stopped in the pit lane entry out of fuel. Even though the team managed to bring the car to its garage, they made a major mistake during refuelling.

109.37 litres of fuel were added to the 110-litre tank of the Porsche But, by regulation, the maximum permitted amount of fuel to be added at a stop is only 107 litres. For each litre in excess, a time penalty of five seconds is imposed. Estre thus crossed the finish line in second place on the road after a stellar fight back but dropped back into fourth position due to the addition of a 15-second penalty.

Black Falcon and their #14 Mercedes AMG GT3 then inherited third place and the first race participation in 2019 of Manuel Metzger, who was not able to start in the two first races due to a sports injury suffered in January, saw immediate podium success together with Adam Christodoulou, Maro Engel and Dirk Muller. 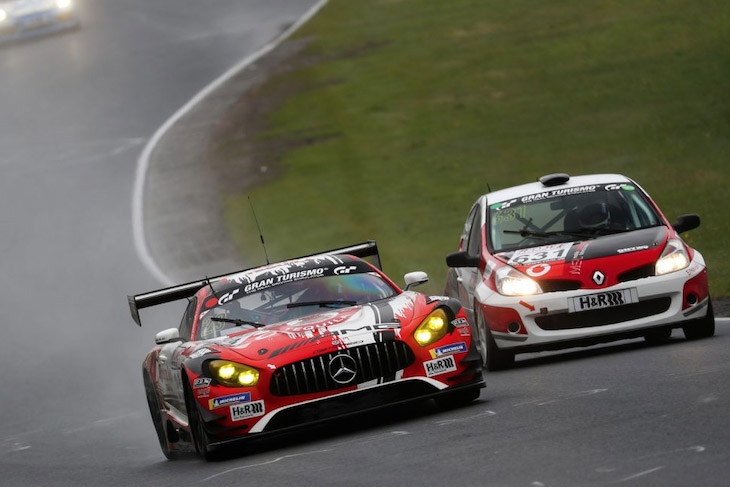 The winners in the SP9 Pro-Am classification were John Shoffner, Janine Hill and Fabian Schiller in the #23 GetSpeed Performance Mercedes-AMG GT3, they would come home 13th overall, but behind an astonishing performance from the #979 Cup 3 class winning Porsche 718 Cayman GT4 CS of Moritz Kranz and Nico Menzel, Kranz opting to nominate that car for a VLN points score-pre-race, he was due to race in two different cars, as a result, he now holds the joint points lead with his team-mate Menzel.

In fact the cars scored 12th through to 15th in the overall order would all come home as class winners with the #123 Muhlner Motorsport Cup 2 Porsche 911 GT3 Cup of Marcel Hoppe, Moritz Kranz and Joern Schmidt-Staade in 14th and the #69 clickversicherung.de Team Porsche 911 GT3 Cup MR of Robin Chrzanowski and Christopher Brück taking the SP7 class win in 15th overall. 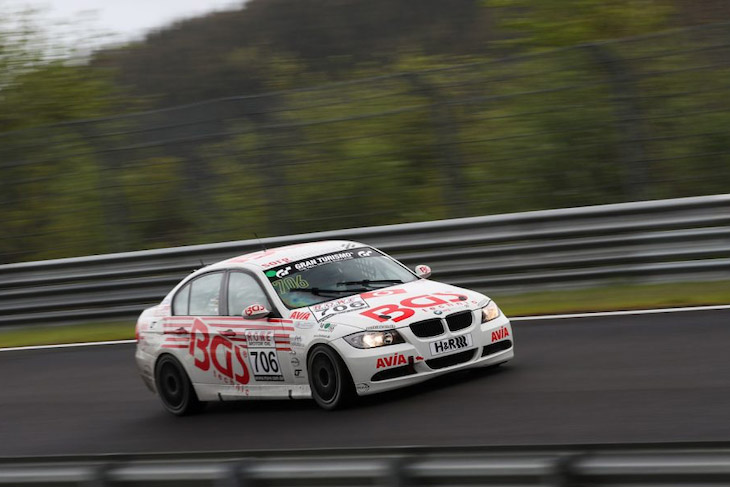 They would pull away to a 5-second gap by the flag, the SP8T Toyota Gazoo Racing Supra separating the V4 class leading pair After their victory at VLN1, and an abandoned VLN2, the Sorg Rennsport trio have a 100% record!.

Pixum Team Adrenalin Motorsport did though take a win in the Cup 5 class for the BMW M240i Racing Cup cars, Yannick Fübrich and David Griessner taking the win in their #650 car after dominating the class.