Two three-hour races were on the card for the second round of the Pirelli Super Taikyu Series at Sportsland Sugo. The cars of the ST-4 and ST-5 classes raced amongst themselves Saturday afternoon in the Group 2 race. You can read DSC’s report on the Group 1 race HERE.

A light rain shower fell on the track just as 20 cars rolled off to start the Group 2 race. The pole-winning #86 TOM’s Spirit Toyota 86 started from pole with Takamitsu Matsui at the wheel, ahead of the #310 GR Garage Mito Inter 86 of Shinya Hosokawa, and the #884 Hayashi Telempu Shade Racing 86 of Yuji Kunimoto.

Two early Full Course Yellows came in the first hour of the race. During the first FCY from Lap 11, the #86 and #310 cars made their first pit stops, with Matsui yielding to Toyota factory driver Kazuya Oshima, and Hosokawa, the 2006 GT500 vice-champion, being replaced by Rintaro Kubo. The #884 waited until the second FCY, beginning from lap 20, to make its first stop and change drivers from Kunimoto to Katsuyuki Hiranaka. With that, the #884 Shade Racing 86 overtook the #310.

The #116 WS Engineering/Prince Honda S2000 (Ryuichiro Otsuka/Noboyuki Yoshida/Ouji Semba/Yotaro Akaboshi) had briefly jumped to the lead during these pit cycles in the hands of Otsuka, but Hiranaka in the #884 Shade Racing 86 passed him for 2nd and started the 2nd hour in hot pursuit of race leader Oshima. 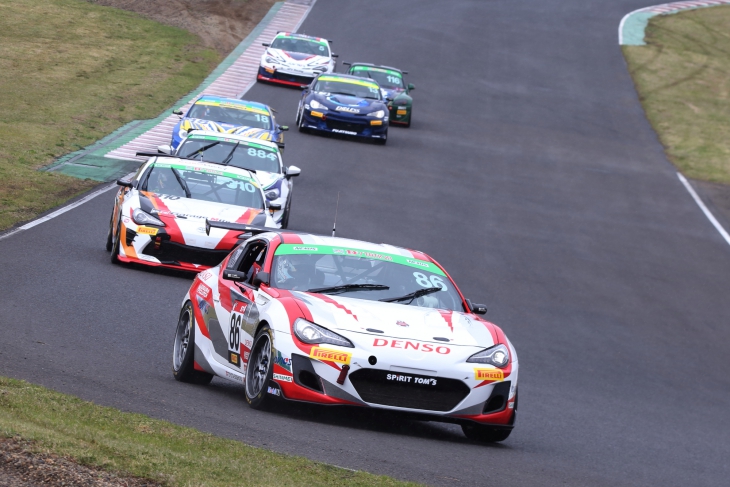 In a half hour, a lead of just over ten seconds had vanished as Hiranaka ran down Oshima. By Lap 56, the gap was less than a second, and the two ran tail to nose. When the TOM’s Spirit 86 was called to the pits for its second stop and a driver change to Sho Tsuboi, Hiranaka went to the lead and was able to run nearly two hours on his stint before pitting with 33 minutes left. They were able to come out ahead of Tsuboi with Kunimoto at the wheel to take the car home.

But while running second, the TOM’s Spirit 86 suddenly ground to a halt at Turn 1 with a half-hour to go with an inexplicable fuel pickup issue! While Tsuboi was able to drive the car back to the garage for repairs, they would finish 7th, losing 6 laps with the issue.

That allowed Kunimoto to drive Hayashi Telempu Shade Racing to their second consecutive ST-4 Class victory of 2019, with Kunimoto and Hiranaka completing 110 laps in just over three hours. The #310 GR Garage Mito Inter 86 of Kubo, Hosokawa, and Rei Yamaguchi finished 2nd, and the #13 Endless Sports Toyota 86 of Yuhki Nakayama and Ritomo Miyata, making their season debut at Sugo, finished on the podium in 3rd. 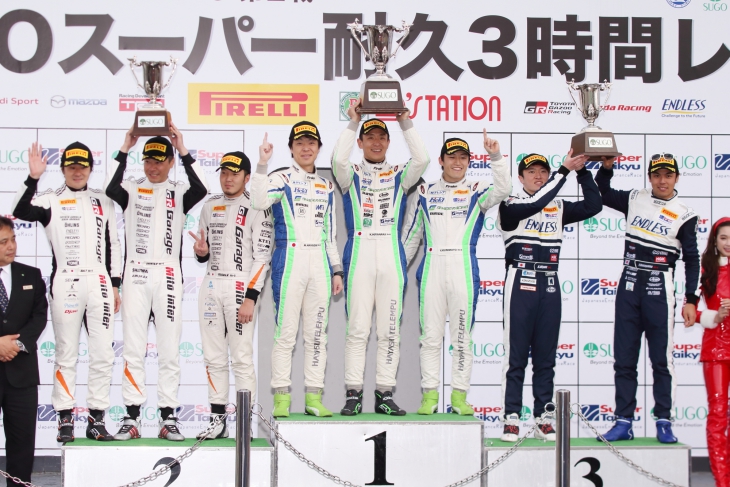 In ST-5, the battle for the victory came down to the final lap of the race and a duel between the #70 J’s Racing Honda Fit RS (Masaharu Imuta/Masayuki Ueda/Hideo Kubota) and the #101 HMRacers Mazda Demio (Soichiro Yoshida/Kota Sasaki). 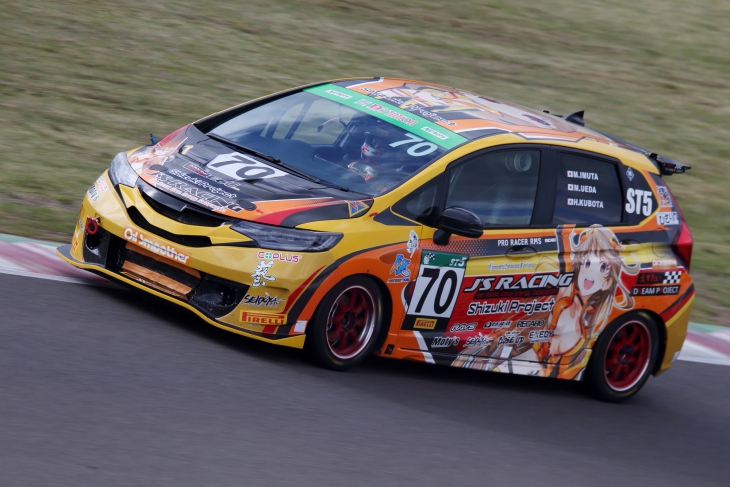 The two J’s Racing Fits were in search of the team’s first win in over two years. It looked like the #69 J’s Racing Fit (Junichi Umemoto/Toshihiro Kubota/Shinsuke Umeda) would be in prime position for the victory, but the #70 of Ueda overtook his teammate Umemoto with 15 minutes remaining, and soon, Kota Sasaki, the 2005 GT300 Champion, gave chase to the two golden yellow Hondas.

With eight minutes to go, Sasaki passed Umemoto for 2nd, and quickly ran down Ueda, closing to his bumper on the final lap. The more experienced Sasaki tried to overtake Ueda around the outside of the Hairpin Corner (Turn 4) on the very last lap, but the white and red Mazda slid off into the gravel, and the #70 J’s Racing Fit drove away to the team’s first victory in over two years.

The #101 HMRacers Demio held on to 2nd, ahead of the #69 J’s Racing Fit in 3rd, as the front-wheel drive cars locked down the top five in ST-5. The #37 DXL Aragosta Team NOPRO Mazda Demio Sky-D that won at Suzuka was one of two cars that did not start the race – and that’ll have major championship implications going into the Fuji Super TEC 24 Hours on June 1-2.