After delays due to parts supply the now Gibson-engined ByKolles shook down in Germany at Genderkingen Aerodrome, close to ByKolles’ Bavarian base.  Paolo Ruberti, a new signing for the team, took the wheel for the straight line runs.  He’ll be joined at Spa by team regulars Tom Dillmann and Oliver Webb.

It’s believed to be Ruberti’s first race entry in a Sports Prototype with his career since F3000 having been exclusively in GT cars, his last appearance in the FIA WEC coming in 2016 in a truncated campaign in the Larbre Competition GTE AM Corvette, a car he regularly put amongst the GTE Pro runners!

DragonSpeed announced the withdrawal of their #10 BR1 Gibson LMP1 car from Spa on Tuesday evening citing difficulties in sourcing the electronics they needed to rebuild the car following their race at Sebring.

We are disappointed to announce that our @FIAWEC LMP1 #10 @DallaraGroup @gibsontech1 entry will not race this weekend @ Spa. We have not been able to acquire the electronics that needed fixing after our DNF at Sebring. A little time, a test and focus on @24hoursoflemans pic.twitter.com/EORkOfbNO1 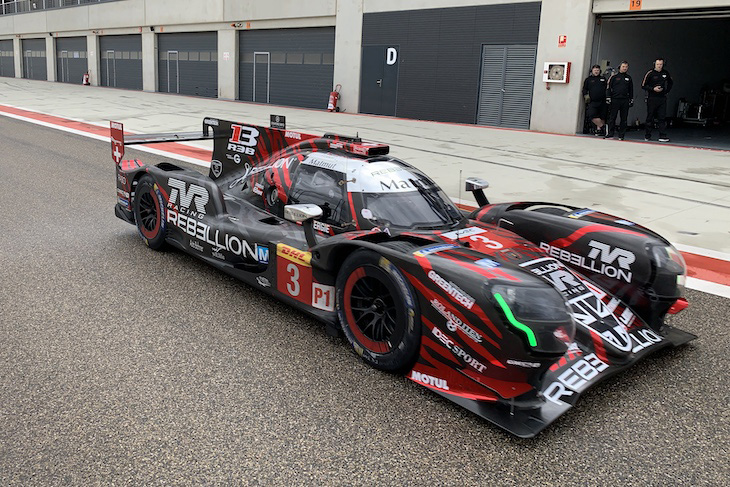 It is believed that the team back to back tested the previous iteration of low drag kit and their current high downforce set-up, and possibly the precious low drag kit too.

SMP Racing is believed to have run their standard aero kit for at least the vast majority of the test.

Ginetta’s AER P60B installation, the 2.4 litre twin turbo V6 replacing the Mecachrome 3.4 litre single turbo powerplant after the car’s troubled Le Mans debut, was already fully designed as part of the package developed for a launch customer for the G60 LMP1 that never came to fruition.

“It was a very different installation to the Mecachrome which was a more compact design with the turbo in the V of the engine, but we’re delighted with the results, it’s neat and tidy and apparently very effective,” said Ginetta Technical Director Pete Smith.

The development Michelin tyres for LMP1 Privateer teams, tested at Aragon, are designed to give the non-hybrid runners the opportunity to get better performance from their front tyres than the current spec, which were designed for the LMP1 Hybrids, with their front axle energy harvesting and power delivery able to generate much greater front tyre temperatures.

“The non-hybrids simply can’t generate the heat required to switch the tyres on properly, the new rubber is designed to deliver that performance at a much lower operating temperature.” said an LMP1 team source.

The opportunity to adopt the new specification was put to an E-vote of current LMP1 entrants recently but was vetoed by one, as yet unidentified privateer team.

It is not currently envisaged that the new tyres will be available for the 2019 Le Mans 24 Hours.

The Equivalence of Technology change made for this weekend’s 6 Hours of Spa will see the non-hybrid privateer car from Rebellion Racing, SMP Racing and ByKolles race without having to lift and cost for the first time this season.

The values issues have seen fuel allocation per lap limits scrapped, finally delivering on a promise made to competitors after last years Le Mans 24 Hours.

Since then the per lap values have been reduced for both Shanghai and Sebring, but have now been entirely dispensed with.  The Toyota Hybrids meanwhile have seen an uptick in their permitted energy per lap to 71.3 MJ per lap, up from 61.3 MJ at Sebring.

The Normally Aspirated Privateer cars (Bykolles and Rebellion) will be at 824 kilos for Spa – up 6 kilos.
The Turbo powered SMP Racing BR1s will run at 833 kilos
The Toyota TS050s meanwhile will run at 904 kilos