Nissan captured pole positions in both the GT500 and GT300 classes for Saturday’s Fuji GT 500km Race after an intense Friday qualifying session that saw lap records reset in both classes.

The #23 Motul Autech NISMO GT-R of Tsugio Matsuda and pole-winner Ronnie Quintarelli will start from P1 in GT500, while in GT300, the #56 Realize Corporation/Nissan Gakuen GT-R GT3 of Kazuki Hiramine and Sacha Fenestraz went on to take its first pole position in Kondo Racing’s second GT300 race.

The conditions were perfect for qualifying on Friday afternoon: The air temperature lingered around 23°C for the start of Q1 at 2:30 PM local time. GT500 Q1 saw 15 cars fighting for eight positions to advance on to Q2 and the battle for pole position. It didn’t take long for times to start tumbling near the course record of 1’27.366 that’d been set by Katsumasa Chiyo in 2016.

But there were many disappointed teams who missed out on Q2, headlined by the #1 Raybrig Honda NSX-GT of defending GT500 Champions Naoki Yamamoto & Jenson Button who’ll start 12th. The winners at Okayama, the #8 ARTA NSX-GT (Tomoki Nojiri/Takuya Izawa) will start 10th after missing out on Q2 by just 0.080 seconds – while the #6 Wako’s 4CR LC500 (Kazuya Oshima/Kenta Yamashita) missed the cut by just 0.037 seconds.

Also missing out was the #36 au TOM’s LC500 with Yuhi Sekiguchi in 11th, joined by Ritomo Miyata, who’s filling in for the Spa-bound Kazuki Nakajima.

Three Lexus, three Nissans, and two Hondas made it to Q2 – among them, the #38 ZENT Cerumo LC500 with Yuji Tachikawa, going for his 24th career GT500 pole position, his 12th at Fuji. 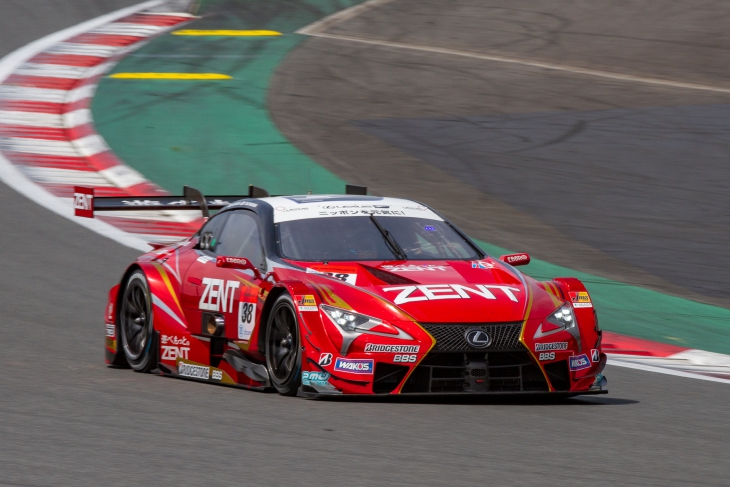 By the start of Q2, the track temperature dropped to 36°C from as high as 40°C. The course record for GT500 was now within the sights of all eight runners.

The first man to break the lap record was Frenchman Frédéric Makowiecki in the #3 CraftSports GT-R, breaking Chiyo’s old record with a 1’27.323 – but behind him, more drivers were finding even quicker times, and a time under the 1’27 range wasn’t out of reach!

Thanks to a brilliant final sector, Ronnie Quintarelli found the magic sub-1’27 lap time and stuck the #23 Motul Autech GT-R on pole position for the second straight race of the 2019 season, with a new GT500 record lap of 1’26.871! A time that would have put them 7th on the grid for the 2018 WEC 6 Hours of Fuji this past October, ahead of the DragonSpeed Racing BR Engineering BR01. It’s Quintarelli’s thirteenth career GT500 Pole Position, which now puts the four-time GT500 Champion second on the all-time career pole winners’ list behind only Tachikawa. It’s also Quintarelli’s third pole position at Fuji, and his second in a row having taken pole in last August’s Fuji 500 Mile Race. Fastest in practice and fastest in qualifying, Matsuda and Quintarelli will attempt to win the Fuji 500km for the fourth time in five years tomorrow, and go back-to-back after winning in 2018.

The #37 KeePer TOM’s LC500 of Hirakawa and Super Formula championship leader Nick Cassidy will start 2nd, the highest-ranked Lexus on the grid on their “home circuit” at Fuji. Cassidy put in a 1’27.105 on his final flyer in Q2. An all-Nissan Row 2 follows them, with the #12 Calsonic Impul GT-R (Daiki Sasaki/James Rossiter) starting third, after a 1’27.289 from Sasaki. The Calsonic GT-R will start alongside of the #3 CraftSports GT-R of Hirate and Makowiecki in fourth. 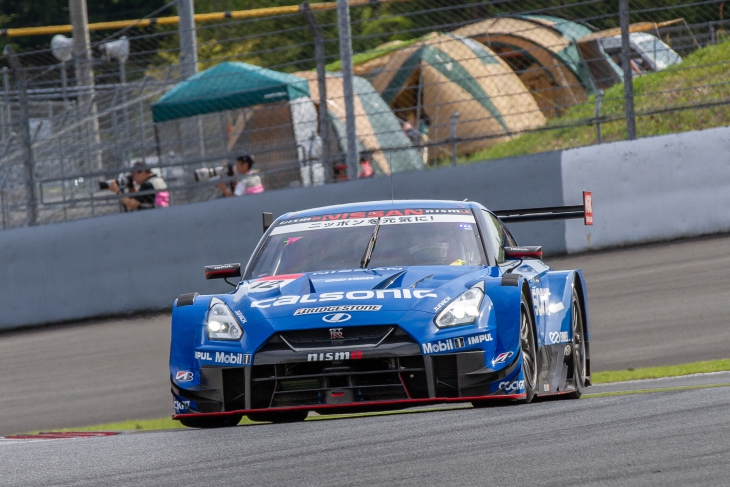 Hideki Mutoh and Daisuke Nakajima start 5th in the #16 Motul Mugen NSX-GT, the highest-finishing Honda in qualifying, ahead of the 6th-place #39 Denso Kobelco SARD LC500 (Heikki Kovalainen/Yuichi Nakayama). And on the fourth row, the #17 Keihin NSX-GT of Baguette and Koudai Tsukakoshi starts 7th, next to the #38 ZENT Cerumo LC500 of Tachikawa and Ishiura, in 8th.

Over in GT300, it was back to the more traditional knockout qualifying format with all 29 cars taking part in Q1. But the top 16 cars would now advance on to Q2 this time out, instead of just the top 14.

The Mother Chassis cars showed impressive one-lap speed in Q1, led by the #2 Syntium Apple Lotus Evora MC of Hiroki Katoh (with Kazuho Takahashi) with a 1’36.566. Third was the #25 Hoppy Toyota 86 MC of Kimiya Sato, which had been repaired in sterling fashion after their crash at Okayama, with the #5 Advics Mach Syaken MC86 of Natsu Sakaguchi in 4th. In amongst them, rookie Sacha Fenestraz was a strong 2nd in the #56 Realize GT-R GT3. Among those missing Q2: Both of the new Toyota GR Sport Prius PHV apr GTs missed Q2 for the second straight race – 20th and 26th respectively – so too did the #52 Saitama Toyopet GreenBrave Toyota Mark X MC (Shigekazu Wakisaka/Hiroki Yoshida), after their great run at Okayama.

It looked as if the #11 Gainer TanaX GT-R of Hironobu Yasuda would have been the hard-luck story of Q1 after missing out by 0.008 seconds after the chequered flag, but after Álex Palou’s best time in the #720 McLaren 720S GT3 was disallowed after having all four wheels outside the track limits, the McLaren was dropped from Q2 and the #11 Gainer GT-R was reinstated!

After Fenestraz did his part to put Kondo Racing’s new blue and white Nissan GT-R NISMO GT3 into Q1, young Japanese Kazuki Hiramine rose to the occasion in Q2, taking his second career GT300 pole position with a best time of 1’35.871 – a time just one-tenth off the class record at Fuji, but one-tenth better than the fastest GTE Pro car in qualifying for the Fuji 6 Hours in October.

The 2018-spec Nissan GT-R NISMO GT3s excelled in qualifying, as Katsuyuki Hiranaka made the most of the #11 Gainer GT-R’s second chance by putting him and Yasuda fourth on the grid for Saturday’s race.

And give a call to the #360 RunUp Rivaux GT-R of Tomei Sports as well: Yusaku Shibata qualified an extraordinary 5th in Q2, which will give he and co-drivers Takayuki Aoki and Atsushi Tanaka a strong chance to take Tomei Sports’ first top-ten finish since returning to Super GT in 2007!

Takamitsu Matsui’s best time of a 1’36.069 was two-tenths short of the pole position, but it was still good enough to put Tsuchiya Engineering on the front row, with the rebuilt Hoppy 86 MC sporting decals thanking Team UPGarage for their assistance in lending spare parts from their previous Toyota 86 MC to help team director and deputy third driver Takeshi Tsuchiya rebuild the Hoppy 86. 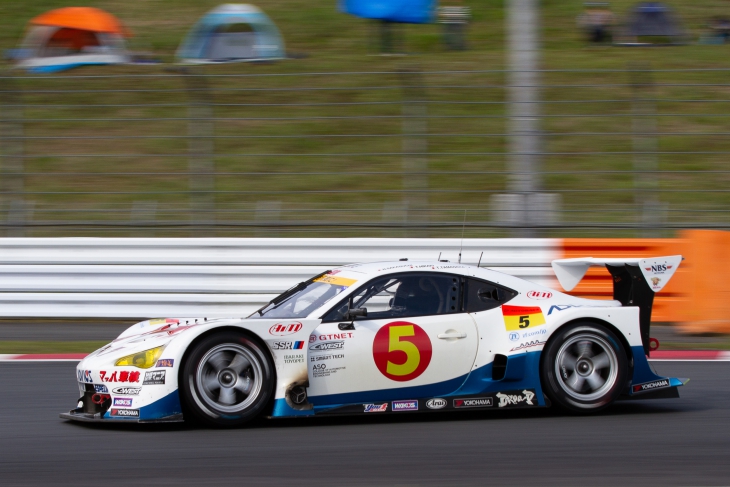