Racing in a winter wonderland?

We’ve had sunshine, heavy rain, and now snow this weekend at Spa. Overnight the area surrounding the Spa-Francorchamps circuit received something between a ‘dusting’ and a ‘dump’ of snow ahead of the FIA WEC race later today. 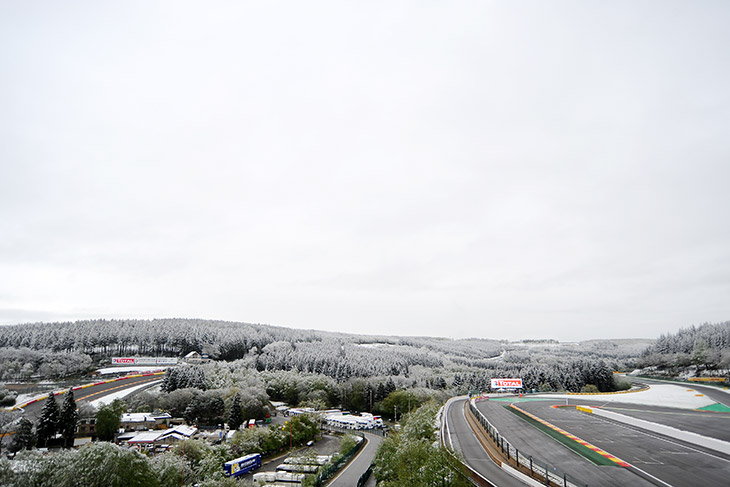 The forest surrounding the track looked beautiful this morning coated in the white stuff, it must be said. Thankfully the track itself was clear, but the forecast as it stands is still rather grim, the snow set to be replaced with rain scheduled to arrive at before the race and stop at 22:00 local time!

With the race start (13:30 local) fast approaching, we now wait to see whether or not we’ll get a full six hours of racing today.

We’ll post any updates on DSC, as and when we get them.

If the weather affects the running in the race, two green flag laps are needed for half points to be awarded, and if 75% of the race time runs, then full points are awarded.

The list of starting drivers in grid order for today’s race can be found HERE.

Re-live the fastest ever WEC lap of Spa!

Onboard of Mike Conway’s record-breaking 1:53.683 lap from yesterday’s Qualifying session at Spa in the #7 Toyota is available to watch on the WEC YouTube channel:

Porsche to proceed with caution with titles on the line

Today’s race is set to be a crucial one for Porsche’s factory GTE Pro team. After a dominant run throughout this season, scoring three class wins (with a 1-2 at Le Mans) and five further podiums between its two 911 RSRs, it is on the brink of winning the all-important Drivers’ and Manufacturers’ World Championships. 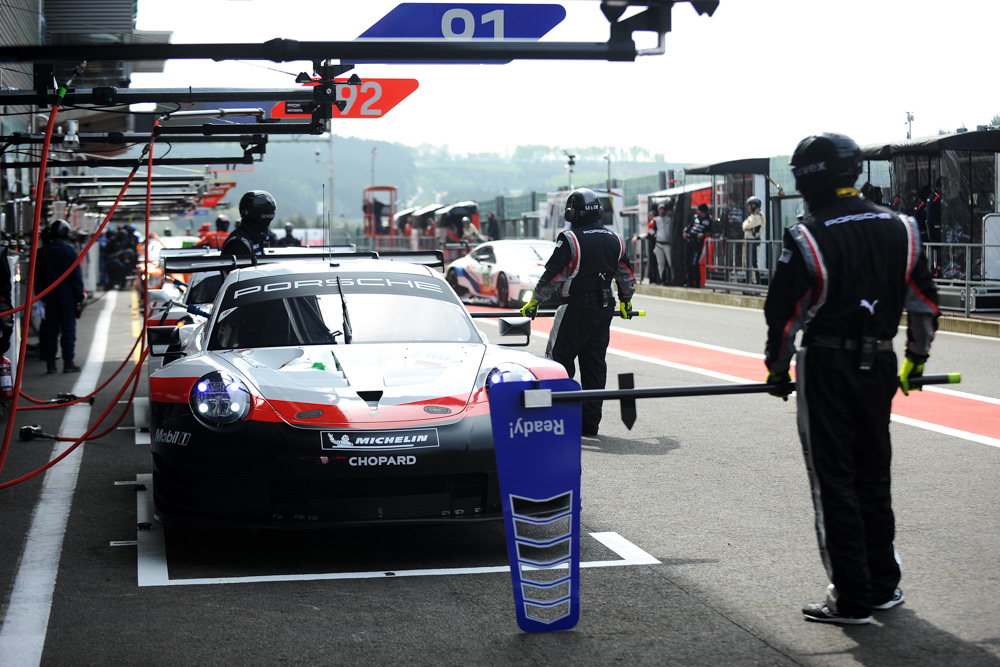 As it stands, Kevin Estre and Michael Christensen in the #92 Porsche lead the Drivers’ standings ahead of the sister #91 of Gianmaria Bruni and Richard Lietz, who are 25 points adrift.

Porsche’s rival in the class is now Ferrari. The #51 AF Corse Ferrari of James Calado and Alessandro Pier Guidi is third in the Drivers’ standings but 44.5 points back, and ‘the Prancing Horse’ is second in the Manufacturers’ standings, 100 off the lead.

So a strong haul of points today will see Porsche head to Le Mans in comfort. it can seal the Manufacturers’ crown easily and eliminate the #51 Ferrari from Drivers’ title contention.

All the German marque needs is a solid haul of points to win the GT Manufacturers’ FIA World Endurance Championship. If Porsche doesn’t drop 33 points to Ferrari then it wins, it needs to head to Le Mans with a 67 point lead to win the title.

In simple terms, Ferrari needs a 1-2 and for Porsche to have a bad run to keep the race alive.

“It doesn’t look like it will be dry. And if it isn’t then we may struggle to fight for the win, as Ford looks good in the wet, Ferrari will come back, and Aston and BMW have learned a lot. We need to stay focused and confident,” Estre told DSC.

“I think we’ll have the title race in the back of our minds, and in these conditions everyone will be careful. The others in terms of strategy will need to take risks to get ahead and hope for something, so we don’t need to take risks. When you think too much though, that’s when you make mistakes, you drive differently when you think of a championship.

“We’ve had a mega year, have made so few mistakes. That’s been the difference. If one car has made a mistake, the other has ended up on the podium. Consistency has left us at the top in the championship. We’ve kept our drivers and crew the same all season, ridden our luck, and it’s been Porsche’s year as a result. We’ve not dominated like crazy, we’ve just executed where it matters.”

Aston confident in the wet

The Aston Martin Vintage AMR is a car that seems to work well in the wet. After taking first and fourth at Shanghai, and topping the wet session here, the team have certainly found something. Additionally, the team has found around 2.5 seconds on its 2018 pace since the opening round of the WEC Super Season’. 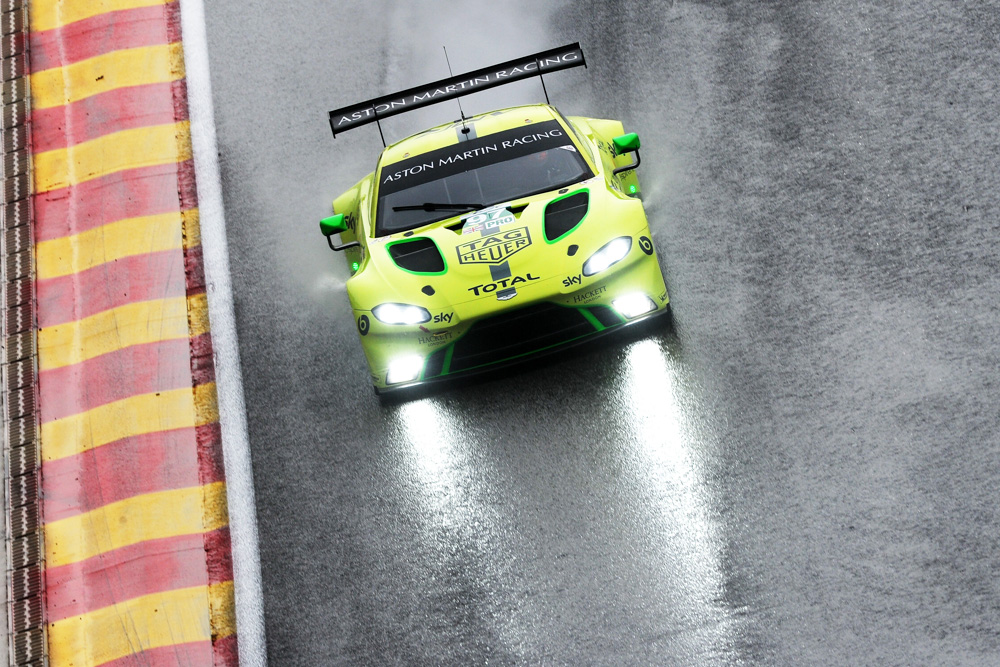 Maxime Martin said the team has learnt a lot about the car and that a better BoP measurement has brought them back to the field. But the efficient downforce of the Aston Martin is what makes it work.

“We have great downforce in the car, it generates a lot of downforce so in the wet this helps. The wet tyres suit us quite well which we don’t have 100% with the dry tyres. It is a bit of everything that has brought us to this pace,” Martin said to DSC.

It is a position that is echoed by Alex Lynn who confirms the importance of aero – and understanding that aero on a current spec GTE car.

“It has a lot of downforce and that is what generates grip in these conditions. It has an incredible amount of downforce. Certainly, it shows a lot in the rain.

“We have got the car into its working range, I think now even in the GTE category the cars are so aero dependent.

“It needs to be in the right window to work correctly and every test we have done we have fine-tuned the car and got the balance, learning the car correctly and that has been the biggest development.”

What do they want for today’s race? Rain. And it looks like they’ll get it!

Today’s race will be available to stream on the FIA WEC app, worldwide, including in North America where fans in the USA and Canada can also watch the action live via the MotorTrend app, as well as on linear TV.

Commentary on that feed will be provided by DSC editor Graham Goodwin, Martin Haven and Allan McNish.

In the UK, both BT Sport and Eurosport will carry the race.

For radio commentary, head to Radio Le Mans, which will be broadcasting the full race live.

Full details on the 6 Hours of Spa’s broadcast coverage worldwide can be found HERE.