Racing in support of the opening round of the World Challenge Europe season at Brands Hatch, the GT4 European Series season resumed after Rounds 1 and 2 at Monza.

Both races were exciting and featured door-to-door racing between a variety of teams representing a variety of GT4 manufacturers.

It was True Racing and Leipart Motorsport that got their campaigns underway with victories at the Kent-based circuit.

True Racing KTM drivers Patric Niederhauser and Reinhard Kofler starred in the first race of the season on Sunday morning. Niederhauser had started the race from fifth on the grid, but took the lead during the pit stop window, never to be caught again. Pro-Am victory went to Leipert Motorsport, with Street Art Racing claiming the win in the Am class. 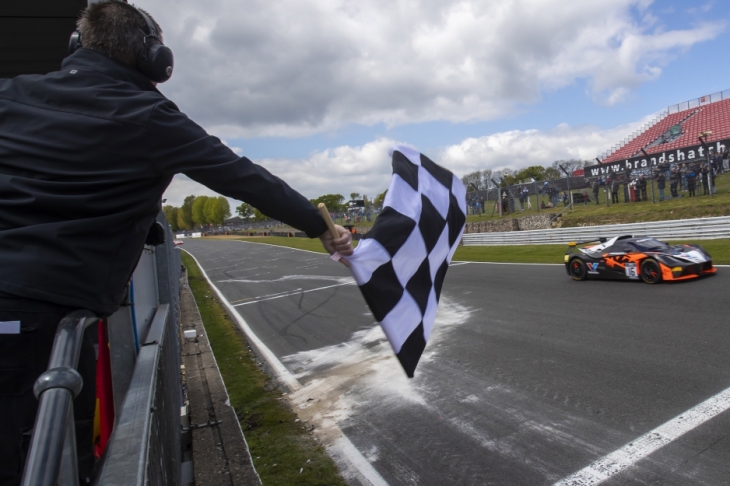 There was early drama in Race 1, with the #21 Allied Racing Porsche of Niki Leutwiler pushed of the track by one of the KTM X-Bow GT4s and then the #66 Bullitt Racing Mercedes-AMG GT4 crashing into the pit wall. Whilst the first incident prompted a Full Course Yellow, the second resulted in a safety car period, as the Mercedes was heavily damaged and unable to move.

The race was resumed as the pit window opened. Pole man Florian Thoma, who had retained the lead, opted to stay out, while Equipe Verschuur driver Benjamin Lessennes handed over the championship-leading #14 McLaren 570S GT4 to Daniel McKay.

Race leader Thoma came in to the pits at the end of lap 15, but teammate Akhil Rabindra rejoined the race behind the #16 True Racing KTM X-Bow GT4, now driven by Reinhard Kofler, which had stopped two laps earlier.

The True Racing driver had a comfortable lead over the cars behind him as he started his stint, with Akhil Rabindra coming under pressure from the #1 Phoenix Racing Audi of Nicolaj Møller-Madsen and the McLaren of McKay. The 2018 Silver Cup champion rapidly closed the gap to the #18 PROsport Aston Martin and took second from the Indian driver, but just after that move, he spun the #1 Audi R8 LMS GT4 into the barriers.

“We were very strong in the race and I knew it was all about the second stint,” said Niederhauser. “We knew we had to do something different with the pit stops compared to the guys ahead of us and it worked out. Reinhard did a mega out-lap and I think that was crucial for our win.”

Kofler was able to hold onto the lead and after 32 laps the Austrian was the first driver to cross the line. Rabindra in the #18 PROsport Performance Aston Martin was second across the finish line, followed by the #14 Equipe Verschuur McLaren of McKay.

Fourth went to the #4 Leipert Motorsport Mercedes of Jan Kisiel and Max Koebolt, with the #19 PROsport Performance Aston Martin of Jeremy Sarhy and David Griessner and the #25 MDM Motorsport BMW of Alec Udell and Simon Knap completing the top six.

In Pro-Am, Norway’s Marcus Paverud in the #2 Leipert Motorsport Mercedes and Gabriele Piana in the #111 RN Vision STS BMW battled for the class win in the final stages of the race, but it was the Norwegian who secured his and teammate Luci Trefz’ second win of the season. British drivers Tom Wood and Fiona James completed the Pro-Am podium with their Academy Motorsport Aston Martin.

Victory in the Am category went to Eric Mouez and David Loger in the CMR Alpine.

Leipert Motorsport then took a commanding victory in the second GT4 European Series race at Brands Hatch later in the day. Jan Kisiel and Max Koebolt in the #2 Mercedes-AMG GT4 led the race from start to finish to claim their first win of the season. The #35 Redele Competition Alpine A110 GT4 won the Pro-Am class, with Street Art Racing’s #17 Aston Martin Vantage AMR GT4 taking the Am class win. 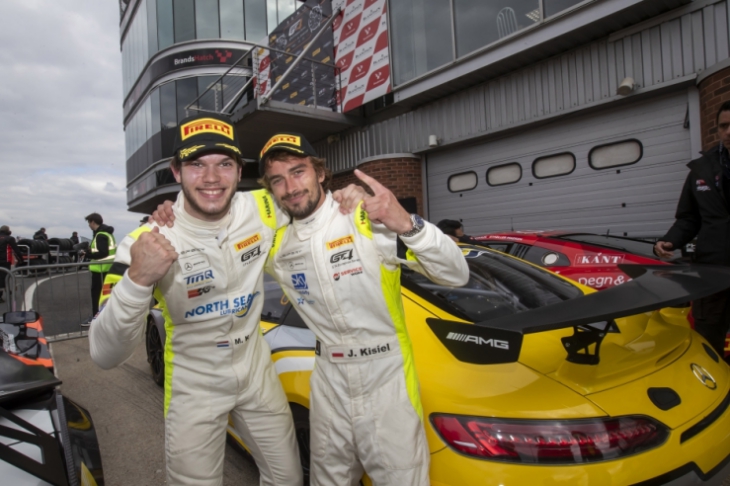 At the start, Jan Kisiel took the lead from Equipe Verschuur’s Daniel McKay on the run down to Druids, who seemed to lose another position when Akhil Rabindra put his PROsport Aston Martin next to the #14 McLaren. However, Rabindra ran wide and made contact with the RN Vision STS BMW of Gabriele Piana. The PROsport driver was given a drive-through, whilst Piana retired his car in the pits.

Kisiel managed to keep the rest of the field behind during his stint. Ricardo van der Ende, who had passed McKay to take second, was able to stay right behind the #2 Mercedes until he made a mistake and spun the #8 Ekris M4 GT4.

McKay opted to pit one lap before the rest of the top six, but his gamble didn’t pay off. A quick stop by the Leipert Motorsport team saw Max Koebolt, who took over the #4 Leipert Motorsport Mercedes-AMG GT4, rejoin in the lead. McKay’s teammate Benjamin Lessennes dropped to third, behind Jamie Vandenbalck in the #7 Street Art Racing Aston Martin.

A small mistake by the Street Art Racing driver handed Lessennes the second place, and Vandenbalck was pushed out of the top three by Cedric Freiburghaus in the #1 Phoenix Racing Audi, with Patric Niederhauser in the race 1 winning KTM X-Bow GT4 passing him to take fourth not much later.

The battle for third between Freiburghaus and Niederhauser became the battle for second when Lessennes was given a drive-through for exceeding the track limits. The penalty meant the #14 Equipe Verschuur McLaren tumbled down the order, but he still finished in the points.

Despite losing most of his 16-second lead as a result of a late safety car, deployed to safely recover a car from the gravel trap, Koebolt kept his cool to retain the lead when the green flags were waved for the final lap. After 36 laps the Dutchman took the checkered flag to notch his first race win of the 2019 season.

“I had to keep up the pace Jan had, which was very high,” said Koebolt. “The car was just great, and I kept pushing, as you never know what happens. Jan had created a nice gap and I was able to extend it. At the safety car restart, I knew I could surprise the two backmarkers behind me and create another gap. That resulted in the win.”

There was plenty of drama in Pro-Am in the second race. Marc Basseng had taken a comfortable lead, but just before the pit window opened his Mercedes-AMG GT4 suffered a puncture and the German was forced to hand over the lead to Tom Wood in the Academy Motorsport Aston Martin.

In the end, however, it was the #35 Redele Competition Alpine A110 GT4 of Gregoire Demoustier and Alain Ferté that claimed Pro-Am victory, in only its second weekend in the series. Race 1 winners Luci Trefz and Marcus Paverud in the #2 Leipert Mercedes finished second, ahead of Tom Wood and Fiona James in the Academy Motorsport Aston Martin.

Street Art Racing’s Clement Seyler and Pascal Bachmann bounced back from their race 1 penalty, to clinch victory in the Am class.