Lanan Racing’s perfect start to the Le Mans Cup season continued at Monza this afternoon, Duncan Tappy and Michael Benham combining for their second win in as many races.

It wasn’t an easy victory though, as once again, the Le Mans Cup produced a wild race, as it did at Paul Ricard, but for a very different reason. Following a rather subdued first half, the race came to life in the second stint, with torrential rain in the final 15 minutes forcing the entire field in for an unscheduled tyre change.

The #25 Lanan Norma M30 was third when Tappy took over in the second half of the race and before rising to second ahead of the change in weather. Quick pit work from the Lanan crew aided Tappy, who was closing in on Nielsen Racing’s Colin Noble, getting the car turned around over 30 seconds quicker, in part due to a starter motor issue for the Nielsen Norma, with the #2 car also needing to be pushed back into place in a very busy pit lane.

“Another eventful race!” exclaimed Benham. “The forecast has been terrible for today all week. We thought we might get away with it, but to get this at the end was crazy. Fair play to our pit crew, they won us the race today, they turned the car around so quickly.”

Benham added: “It’s a team effort, Mike made no mistakes. Then at the end, it was so hard. I’ve never had a slower last lap to the race.”

A disappointed Colin Noble added: “The weather was crazy at the end, I was aquaplaning everywhere, almost impossible to keep the car on the track – It was a matter of survival at the end.”

Early in the race in Michael Markussem in the #43 Keo Racing Ligier JS P3 Nissan pole-sitting car held a strong lead after a prudent start but was quickly chased by the #3 DKR Engineering Norma M30 driven by Francois Kirmann. Meanwhile, the #2 Nielsen Racing Norma M30 dropped to third place but remained in close contact to the two other leading cars throughout the first half hour of the race.

During the second half of the first hour, Kirmann attacked Markussen on several occasions as the #3 showed pace down in the straights, yet he couldn’t find a way through.

After drivers were changed halfway through the race, the #43 kept the lead but the #2 Nielsen Racing Norman M30 driven by Colin Noble took second position in the pits, ahead of the #25 Lanan Racing driven by Duncan Tappy.

On lap 40, Noble finally overtook the #43 up the inside at Turn 1. Meanwhile, the #43 driven by Joakim Frid lost more ground and dropped two places after being overtaken first by the #25 and then by the #3 driven by Laurents Horr.

Noble looked in control of the gap to Tappy coming into the final stages, with Tappy in turn able to deal with the challenge from Hörr and hold a steady gap.

“I was really comfortable, the car has been fast all weekend and I had something still in hand if and when the challenge came from behind so I could respond when they pushed.”

With 15 minutes remaining in the race, a thunderstorm hit the track and all competitors changed tyres. This ultimately set the finishing order, with the #20 Grainmarket Racing Norma coming home a strong fourth, ahead of the #5 DKR Norma in fifth, the #24 United Ligier after a late charge from Wayne Boyd and the KEO Ligier that dropped to seventh.

Meanwhile, in GT3, it was a quiet affair, even when the rain came down. 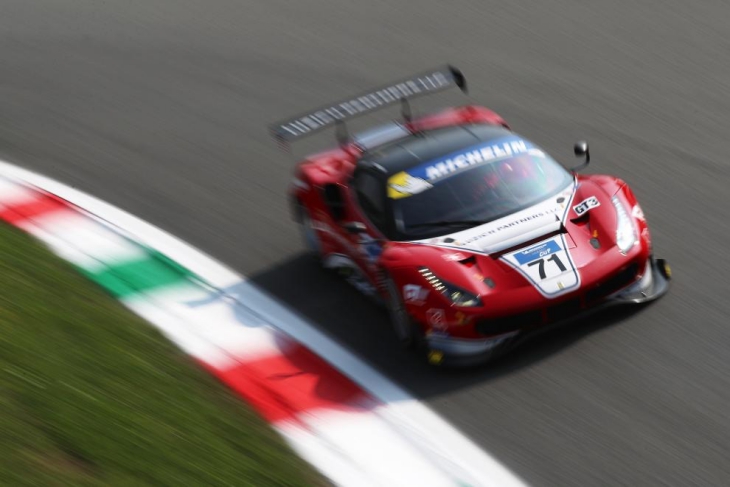 The #7 came into the pits for a drive-through penalty on lap 12 after jumping the start and dropped to third place.

After the stops the two positions remained unchanged with the #71 leading the #8 with a gap exceeding 20 seconds. Meanwhile, the #51 Spirit of Race Ferrari 488 GT3 driven by Maurizio Mediani inherited third place in the pits with a potential podium chalenge from the Beechdean Aston Martin fading when the team pitted under green for wet weather tyres, losing time as the call for a Full Course Yellow came a little later than they anticipated.

20 minutes before the chequered flag, race control called in the #8 for a drive-through penalty (collision earlier on with car #11 at Turn 1) but the Ferrari 488 GT3 remained in the final podium spot until the flag.

Next up for the Michelin Le Mans Cup is the Road To Le Mans during the week leading to the 24 hours.