Nicki Thiim clocked a time of 1:49.175 around the Snetterton 300 circuit to put the #2 TF Sport Aston Martin shared with Mark Farmer at the top of the timesheets for the weekend’s first British GT free practice session.

Conditions were changing throughout the session as the track dried out after earlier light rainfall, making it difficult for firm conclusions to be drawn about race setups or tyre wear.

Phil Keen in the #72 Barwell Lamborghini was just fractions behind Thiim, his time of 1:49.186 just 0.011 seconds off the Dane’s effort. The #99 Beechdean car made it two Danish-driven Aston Martins in the top three quickest runners; Marco Sorensen’s time was a 1:49.436.

Behind them came two Oulton Park race-winning cars: the De Haan/Cocker #69 Lamborghini in fourth and the Parfitt/Morris #31 Bentley in fifth, both around three tenths off Thiim’s benchmark.

Sixth-fastest was the Balfe Motorsport McLaren 720S of Shaun Balfe and Rob Bell, back in action following its early withdrawal from the Oulton weekend due to electrical issues and now sporting the traditional bright red Balfe livery.

The Davidson/Adam #47 TF Sport Aston put in the seventh-best time of the session, ahead of Oulton podium finishers Ollie Wilkinson and Bradley Ellis in the Optimum Motorsport-run Aston. 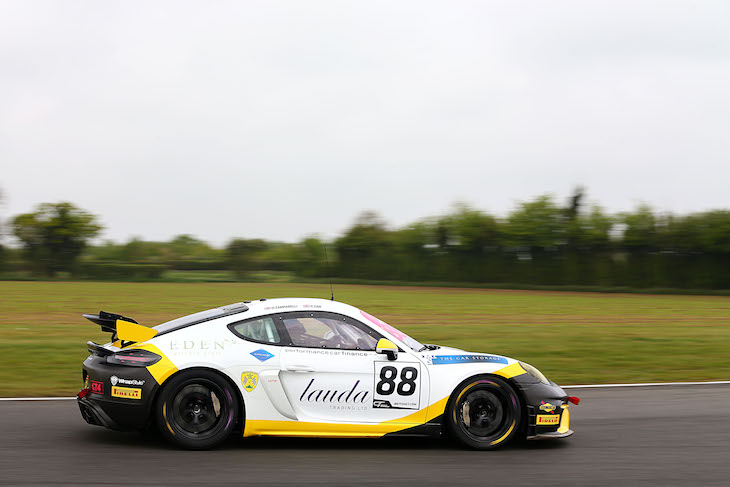 In GT4, championship newcomers Dino Zamparelli and Chris Car in the #88 GT Marques Porsche Cayman GT4 (above) paced the field. The car is making its British GT debut this weekend, with the par having skipped the Oulton season-opener at Easter.

Carrera Cup stalwart Zamparelli’s best effort was a 1:58.478, just a hair faster than the second-quickest car in the class, the #66 Team Parker Racing Mercedes of Scott Malvern and Nick Jones, on a 1:58.561.

The top three in GT4 was rounded out by the Oulton Park podium-finishing Invictus Games Racing Jaguar. Matt George’s best lap was a 1:58.600; he shares the car this weekend with Paul Vice.

Fourth, fifth and sixth-fastest in GT4 were the #11 Plowman/Fletcher Beechdean Aston, the #5 Collard/Proctor Tolman McLaren and the #97 Hand/Canning TF Sport Aston Martin.

There were no red flags or other interruptions to the session, and every car in the field turned at least some laps during the hour’s running. FP2 follows at 11:40 am.