This promoted the Beechdean AMR Aston Martin of Kelvin Fletcher and Martin Plowman to first in GT4 Pro-Am.

Phil Keen and Adam Balon have had a perfect second round of the British GT Championship, capping off their weekend’s work with victory in Sunday afternoon’s race two, repeating the race-one result for the #72 Barwell Motorsport Lamborghini.

In GT4, meanwhile, Tolman Motorsport’s #5 McLaren crew of Lewis Proctor and Jordan Collard took their maiden British GT win in the second race, but only inherited the position on the penultimate lap when the #66 Team Parker Mercedes of longtime leaders Nick Jones and Scott Malvern suffered a heartbreaking late-race puncture. 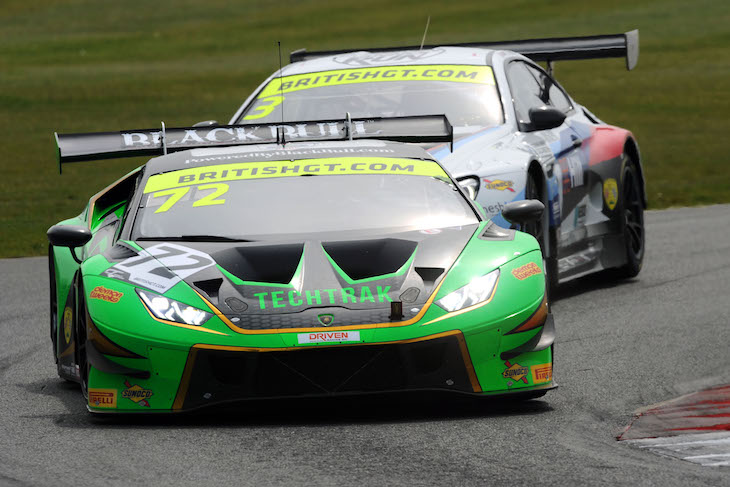 Penalties incurred by their co-drivers in race one demoted Abba Mercedes’ Adam Christodoulou (fifth to eighth) and Beechdean Aston Martin’s Marco Sorensen (eighth to 11th) on the final starting grid, which was headed by Nicki Thiim in the #2 TF Sport Aston Martin and eventual winner Keen in the #72 Lamborghini.

The start saw a clean first lap, with Thiim retaining the lead from Keen in second, Jonny Cocker in the #69 Lamborghini third, Seb Morris in the #31 Bentley fourth and Rob Bell in the #22 McLaren fifth.

Behind them, Ryan Ratcliffe was had to serve a stop-go penalty due to the #7 Bentley staying up on its jacks too late during the grid procedure, dealing a blow to his and Glynn Geddie’s race chances.

The opening laps were fast, clean and incident-free, even as the leading group began to filter through GT4 traffic from lap nine onwards. Even after 10 laps, the gap between Thiim and Keen was just two-tenths of a second, with Cocker a further 2.5 seconds in arrears.

With the Keen/Balon car having to spend an extra 10 seconds in the pits due to its race-one win, Thiim’s co-driver Farmer was the one who emerged in the lead after the pit window had played out.

But the former Snetterton winner didn’t appear comfortable in the slightly drizzly conditions, and as the stint wound down he was caught and passed first by the eventual race winner Balon, and then Balon’s team-mate Sam de Haan in the #69, which would go on to finish second.

Further back, Morris’ co-driver Rick Parfitt snatched fourth from Shaun Balfe in the #22 McLaren on lap 20 but promptly went off at Murrays, undoing his good work. He did manage to get the wounded Bentley across the line seventh but had to pull in almost immediately after taking the flag.

On lap 27, Farmer was demoted off the podium by Balfe, while with two laps to go, Graham Davidson in the #47 Aston took advantage of a slight mistake from Richard Neary on a damp track to take fifth.

The final two laps were tense up front, as the two leading Lamborghinis came across a gaggle of GT4 traffic. First Balon, then de Haan, was held up mid-corner by various cars, but all parties emerged unscathed and the Barwell duo crossed the line just half a second apart. 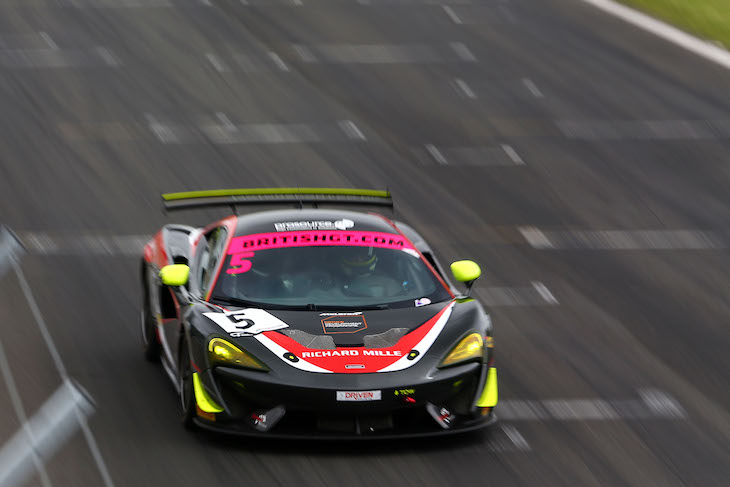 GT4 was very nearly as clean and uneventful in the early stages as GT3, however, there was a coming-together between Ben Devlin in the #19 Multimatic Mustang and Jack Butel in the #35 Optimum Aston Martin on lap eight. There was also an incident between Angus Fender in the #43 Century BMW and Sean Cooper in the #32 Track Focused KTM, with a stewards’ investigation pending post-race.

Polesitter Scott Malvern was untroubled at the front of the field, followed by Dean MacDonald in the #57 HHC McLaren and Tom Canning in the #97 TF Sport Aston Martin. That order remained unchanged for pretty much the entire first stint, as did the fourth to sixth place runners Michael O’Brien (#20 Balfe McLaren), Matt George (#44 Invictus Jaguar) and Jordan Collard (#5 Tolman McLaren).

Following the pit window, Paul Vice had a grassy moment on his out lap in the #44, and the #57 McLaren was hit with a two-second stop-go penalty for a too-short pitstop. That left Malvern’s co-driver Jones in the lead, 30 seconds clear of Graham Johnson, who was now aboard the #20.

With the Team Parker Mercedes streaking away at the front, the action centred on Johnson defending from Canning’s co-driver Josh Hand in the #97 Aston Martin. But in the process of attacking Johnson, Hand became distracted and allowed Lewis Proctor in the #5 Tolman McLaren to take the position.

Third then became second for Proctor when the ominous ‘team manager to race control’ message for car #20 led to a 10-second stop-go penalty for the Balfe car, for causing a collision earlier in the race.

The final twist came on the penultimate lap when GT4 leader Jones was sent slithering across the grass by a tyre failure. The Tolman crew’s margin of victory over the Hand/Canning car was just 3.3 seconds in the end, with Pointon and MacDonald managing to salvage third overall in GT4 despite their stop-go penalty.

Luke Williams and Tom Jackson in the other HHC entry finished fourth, ahead of race-one winners Sennan Fielding and Richard Williamson in the Steller Performance Audi. Rounding out the top six was the Multimatic Mustang of Scott Maxwell and Seb Priaulx.

Next on the schedule for British GT is the annual three-hour event around Silverstone, taking place on 8/9 June.