Adam Balon took his maiden GT3-class win in the British GT Championship in Saturday’s race one, co-driving with Phil Keen in the #72 Lamborghini.

A relatively serene race for the Barwell Motorsport crew contrasted with furious action, penalties and mechanical trouble elsewhere in the GT3 field, which left the destiny of the remaining podium positions in doubt right up to the flag.

GT4 was a much more straightforward affair, with the Steller Performance crew of Richard Williams and Sennan Fielding taking a comfortable win on their Audi R8’s series debut, ahead of the #4 and #5 Tolman Motorsport McLaren entries. 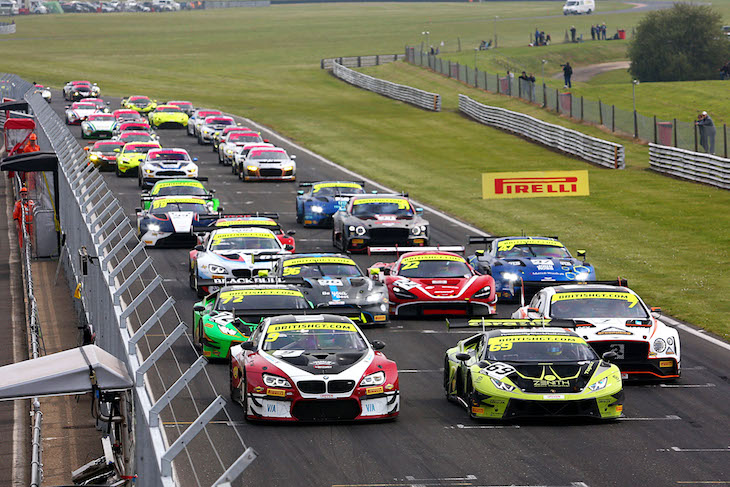 GT3: As it happened
Polesitter Tom Gamble held his lead through Riches but appeared to get tagged lightly as the field rounded the Wilson hairpin, losing momentum on the way out and handing the lead to Glynn Geddie, who’d started fourth in the Team Parker Bentley.

There was drama mid-pack as Richard Neary in the Abba Mercedes was too late on the brakes into the hairpin, contacting heavily with the back of Mark Farmer’s #2 TF Sport Aston Martin and retiring on the spot due to radiator damage. Farmer, however, managed to keep going, albeit with heavy rear-end damage.

Ollie Wilkinson made a good start in the #96 Optimum Aston, running third by the end of the first few laps, however eventual race winner Balon actually didn’t get away well. He was down in sixth by the end of lap four, behind Sam de Haan (#69 Barwell Lamborghini) in fourth and Dominic Paul (#3 Century BMW) in fifth.

Those two had a coming together at the hairpin on lap seven, though, with Paul tagging de Haan into a half-spin, and subsequently taking a stop-go penalty for causing the collision. That saw Balon move up the order to fourth, with Rick Parfitt in the #31 Bentley and Shaun Balfe in the #22 McLaren not far behind, ahead of a recovering de Haan and Michael Igoe in the #18 WPI Lamborghini.

As the pit window opened, Geddie, Gamble, de Haan and Igoe all stayed out an extra lap compared to the rest of the field. Success penalties didn’t play a big part in reshuffling the order during the stops, with the affected #69 Lamborghini, Abba Mercedes and Beechdean Aston all out of contention due to those first-stint incidents.

Geddie’s Team Parker Bentley didn’t have the quickest of stops, so Phil Keen (having taken over from Balon) emerged behind Gamble’s co-driver Jack Mitchell in second, ahead of Geddie’s co-driver Ryan Ratcliffe and Wilkinson’s co-driver Bradley Ellis.

The #96 Aston’s time at the head of the field was cut short by a one-second stop-go penalty for a too-short pit stop, however. That promoted Rob Bell in the Balfe McLaren to fourth, closely followed by Jonny Adam, in the #47 TF Sport Aston Martin that had been started from eighth on the grid by Graham Davidson.

Seb Morris (#31 Bentley) and Johnny Cocker (#69 Lamborghini) were running fifth and sixth after the stops and Ellis’ penalty had happened. Up front, Gamble defended very well from Keen’s attention, but we never got to find out if the series debutant could have held off the Lamborghini for the duration, as the Century BMW slowed with a mechanical issue at the Wilson hairpin shortly afterwards.

It was a straightforward cruise to the flag for Keen from that point on, but less so for the rest of the field. First, Bell had to retire with a right-rear puncture when the #58 GT4-class HHC McLaren hit the car after losing the back end through Riches.

The pressure was now on Ratcliffe in second, with three former champions in the shape of Adam, Morris and Cocker behind him, ready to pounce on any mistake. Things came to a head on the penultimate lap, when Adam went on to the grass while trying to go around the outside of Ratcliffe’s car, giving Morris an opportunity to stick his nose in. 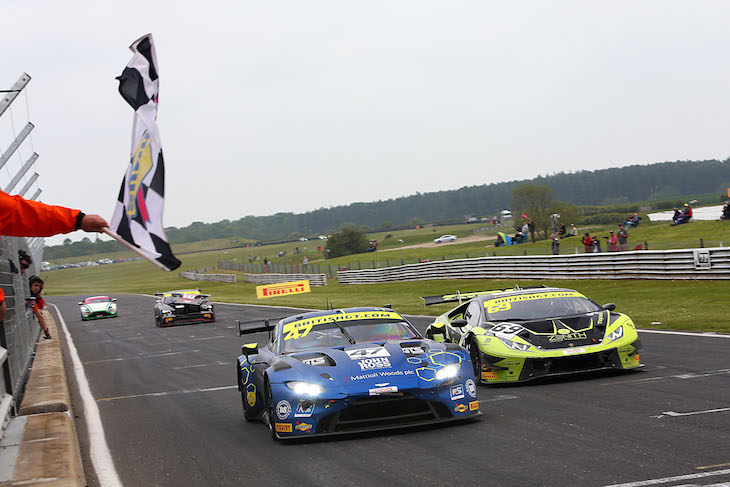 It looked like they would finish in that order, but on the final lap, Ratcliffe ran wide, causing a GT4 Aston Martin to slow in response. Morris nerfed into the back of the latter car, leaving him with a loose bonnet, but he made it around the last few corners to eventually finish fifth behind third-place Adam and fourth-place Cocker (above).

Adam Wilcox brought the WPI Lamborgini home sixth, ahead of the penalised Ellis in eighth and Nicki Thiim (who had to claw back from Farmer’s earlier dramas) in ninth. Ben Green rounded out the top 10 in the #3 BMW, delayed by Dominic Paul’s earlier penalty.

GT4: As it happened
GT4 was much less eventful than GT3 this time out, although there were a couple of casualties in the early laps, including the #75 Optimum Motorsport Aston Martin and the #43 Century Motorsport BMW.

Andrew Gordon-Colebrooke in the latter car had unavoidable contact with the slow-starting #19 Ford Mustang of Alistair MacKinnon at, causing retirement on the spot for the #43 with suspension damage and possibly contributing to a front puncture that struck the #19 several laps later.

At the front of the field, polesitter Scott Maxwell in the #15 Ford Mustang lost ground to both second-place starter Richard Williams in the Steller Audi and fourth-place starter Callum Pointon, who rose to second in the #57 HHC McLaren by the end of the first tour.

Third-place starter Josh Price in the #95 TF Sport Aston found himself down in sixth at the same point, with Josh Smith moving up to fourth in the #4 Tolman McLaren and Mark Kimber in the #42 Century BMW running fifth.

By the end of lap nine, Pointon had lost two places, promoting Maxwell to second and Smith to third. They remained in those positions up until the pit window opened, when 10-second success and 14-second Silver Cup penalties saw Maxwell’s co-driver Priaulx rejoin well out of contention for a podium spot. 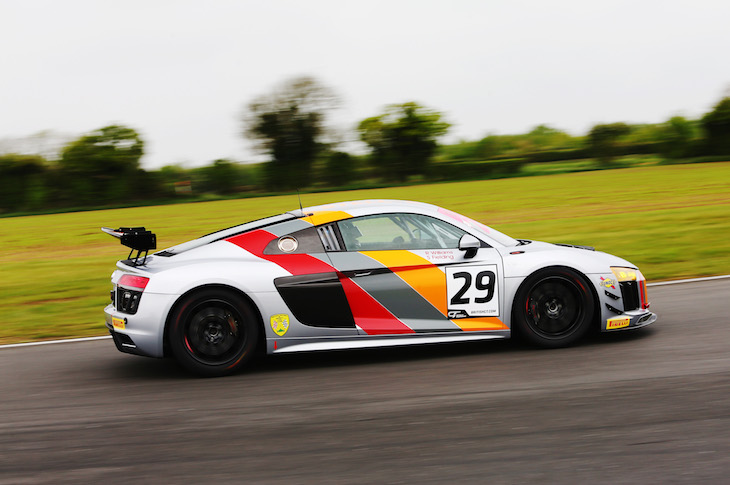 After the stops, Williams’ co-driver Sennan Fielding set about establishing a hefty 13-second lead over Smith’s co-driver James Dorlin in the #4, with Mikey Broadhurst initially running third in the #77 Fox Motorsport Mercedes that had been started by Mark Murfitt.

Tom Jackson initially ran fourth in the second stint at the wheel of the #58 HHC McLaren started by Luke Williams, but a moment going through Riches resulted in contact with the GT3-class Balfe McLaren and a drop out of contention. 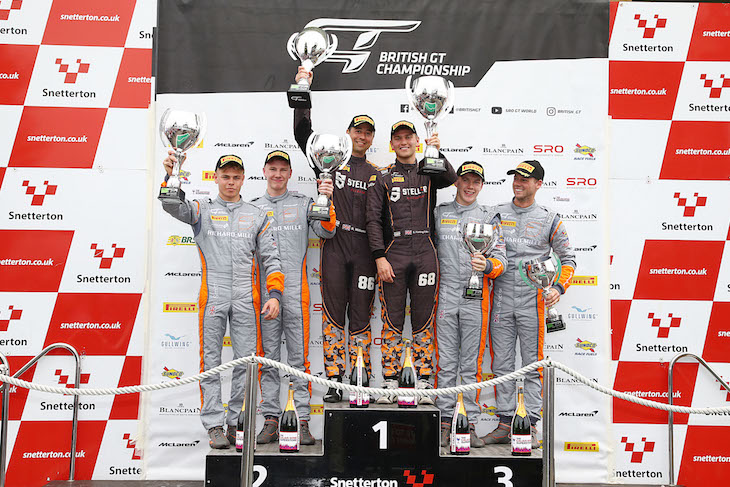 Fielding and Dorlin progressed to the flag without incident, Fielding eventually crossing the line 8.7 seconds ahead of the #4 Tolman car. There was a change for third in the closing stages, though, with Broadhurst dropping to fifth, Jordan Collard moving into third in the #5 McLaren to make it a Tolman 2-3 and Dean MacDonald taking fourth in the #57 HHC car.