We’d like to propose an open invitation on what is already one of the busiest and most anticipated race weekends in world motorsport. Before the glitz and glamour of the Monaco Grand Prix, and before the spectacle and pageantry of the Indianapolis 500. This Sunday, the invitation is open to all; to awaken early, and join and watch the third round of the Autobacs Super GT Series from the famous Suzuka Circuit: The Suzuka GT 300km Race.

Suzuka’s place as one of the great cathedrals of motorsport needs little exposition, the home of the Formula 1 Japanese Grand Prix, the Suzuka 10 Hour sports car race, the Suzuka 8 Hour motorcycle race; just to name a few of the great races held here over the years since the circuit first opened in 1962.

For Super GT, the series’ history at Suzuka began in 1995 with the first running of the 300 kilometre GT race, a marquee event that spent time as the opening round of the season, and as the championship-deciding final round, over the years through 2010. From 2006 to 2017 the Suzuka 1000km became the marquee championship round of the Super GT season, and with its transformation into the Suzuka 10 Hours last year, the 300km race was revived as Super GT’s annual visit to the world-renowned 5.8-kilometre figure-of-eight circuit.

It may no longer be the longest race of the season or pay out the most points, but Super GT’s annual trek to Suzuka is still special, and winning here at this level means so much to everyone: From the Japanese drivers who cut their teeth in the lower ranks at this circuit over the years, to the international stars who venture here and wish to emulate their heroes, the likes of Senna, Schumacher, Hakkinen, the list goes on.

This is the last race of the season before a month-long break, where many of the drivers in the field will trek to Le Mans, or the Nürburgring, or both, before returning for the start of the “Mid-Summer Triple”.

As a result, this race will ultimately decide who the early championship contenders will be, as the 2019 Autobacs Super GT Series reaches its halfway point. The days are getting longer, and warmer, and the weight of the Success Ballast is getting heavier on the cars. And over 50,000 spectators are expected to make the trip to Suzuka to watch the 300km race that fits so perfectly into the festivities of the greatest weekend in international auto racing.

Last year’s Suzuka GT 300km race saw a thrilling duel between the two leading Honda NSX-GTs for the overall victory in the GT500 class, much to the delight of the many Honda supporters in attendance at the Honda-owned circuit. 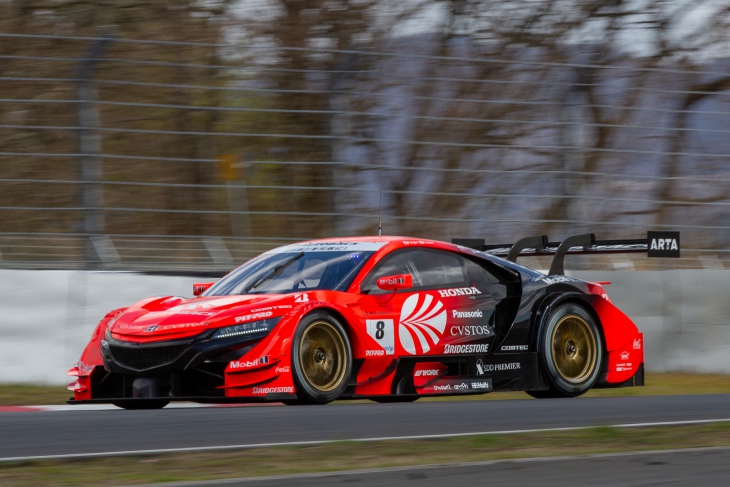 Tomoki Nojiri and Takuya Izawa in the #8 ARTA NSX-GT started from pole position, and looked set to break away from the field. But thanks to quick pit work, the #100 Raybrig NSX-GT of Naoki Yamamoto and Jenson Button fought back. Yamamoto gave Nojiri all the pressure that he could over the closing laps, but the bright orange car held off the royal blue car, and Nojiri and Izawa scored their first of two victories in 2018. Yamamoto and Button settled for a close second, one that would establish their eventual run to the GT500 Championships.

And now, both teams are back, ready to lead the Honda charge. Nojiri and Izawa, driving for Aguri Suzuki – the man who made history at Suzuka as the first Japanese F1 podium finisher in 1990, picked up the win in the rain-shortened season-opener at Okayama this April.

The crew of the #1 Raybrig NSX-GT for Team Kunimitsu have had to battle through the first two races of the season including their third-place finish at the Fuji 500km, but in Button, they have a driver that’s won the Japanese Grand Prix with McLaren in 2011, and in Yamamoto, they have the modern-day “Suzuka-meister”: A previous winner of the Suzuka 1000km, with six Super GT podiums and five Super Formula victories at this circuit. 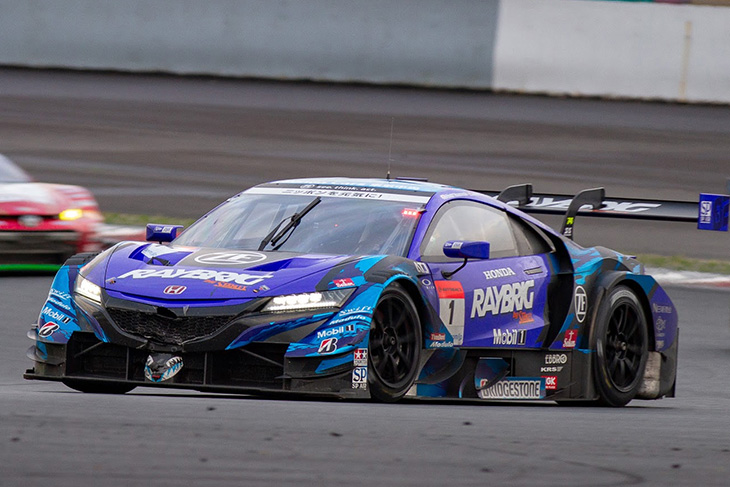 ARTA and Team Kunimitsu are the focal points of a five-car Honda attack at Suzuka that also includes the #17 Keihin NSX-GT (Koudai Tsukakoshi/Bertrand Baguette), from the Real Racing team that has always had the speed to win at Suzuka, but has been snakebitten by hard luck nearly every time they’ve raced here. The #16 Motul Mugen NSX-GT (Hideki Mutoh/Daisuke Nakajima) still pursues Team Mugen’s first GT500 podium since their return two years ago.

And the #64 Modulo Epson NSX-GT (Narain Karthikeyan/Tadasuke Makino), from the Nakajima Racing team that won the final Suzuka 1000km in 2017, has a brilliant young driver in Makino – who took pole position in his first Super Formula race at Suzuka in April. Nine victories and eleven pole positions in Super GT championship races at Suzuka make Honda among the favourites, but the challenges from Nissan and Lexus cannot be ignored. 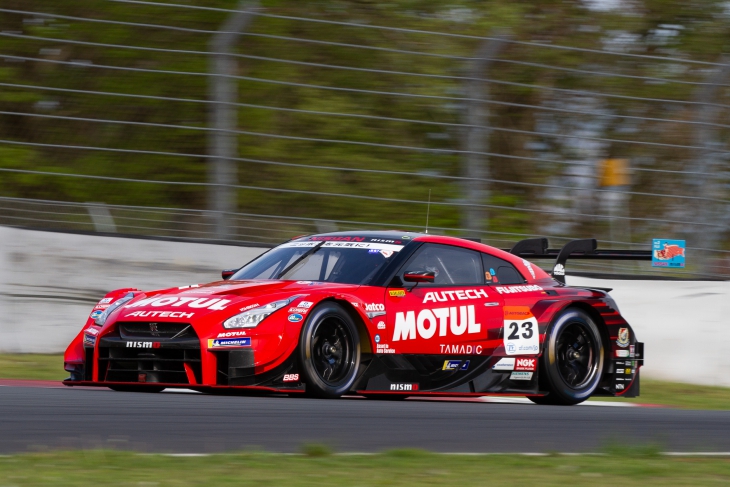 The #23 Motul Autech NISMO GT-R of Tsugio Matsuda & Ronnie Quintarelli brings a three-point lead in the GT500 Championships to Suzuka, with back-to-back second place finishes and pole positions in both races. The Nissan fleet is reinvigorated in 2019, thanks in large part to the improvements from the GT-R NISMO GT500 in the offseason. Both Matsuda and Quintarelli have won the Suzuka 1000km, and together over the last four years, they have a pole position and two second-place finishes. This weekend, they’ll carry 49 kilograms of Success Ballast, highest of any car in the field.

The improvements at Nissan are across the board: The #3 CraftSports Motul GT-R (Kohei Hirate/Frédéric Makowiecki) has performed brilliantly as the other Michelin-clad GT-R, scoring more points over the first two races of 2019 than the NDDP Racing with B-Max crew did all of last season. With two top-six finishes, the white GT-R, with 2013 Suzuka 1000km winner Makowiecki, looks to get into the win column in 2019. The #12 Calsonic Impul GT-R (Daiki Sasaki/James Rossiter) is also a car to watch after their day at the Fuji 500km unravelled before the halfway mark, so they’ll be inspired to perform well and end their lengthy winless drought, especially with back-to-back Suzuka 1000km winner Rossiter at the wheel. And so too will the #24 Realize Corporation Advan GT-R (Mitsunori Takaboshi/Jann Mardenborough), from the Kondo Racing team that won pole at Suzuka in August 2017.

Nissan haven’t won a Super GT round at Suzuka since the 2012 1000km race, but they do have ten previous victories, one more than Honda, and one more than Toyota/Lexus. Speaking of Lexus, they are coming off a victory at the Fuji 500km by way of the #38 ZENT Cerumo LC500 of Yuji Tachikawa and Hiroaki Ishiura, who are now second in points thanks to the victory three weeks ago. It’s little surprise that Tachikawa has performed well at Suzuka throughout his storied career: He has four championship victories at Suzuka, the most recent in 2016 with his co-driver Ishiura. Both drivers have two victories each in the 1000km, and with another solid result, can bolster their 2019 championship challenge.

Elsewhere in the Lexus camp, the #37 KeePer TOM’s LC500 (Ryo Hirakawa/Nick Cassidy) has struggled to get the results to match their pace this season, but with a light Success Ballast handicap, and Cassidy in the form of his young career, this is the perfect place for the #37 TOM’s crew to turn the season around. Kazuki Nakajima is back in the #36 au TOM’s LC500 after winning the 6 Hours of Spa during the Fuji 500km weekend. 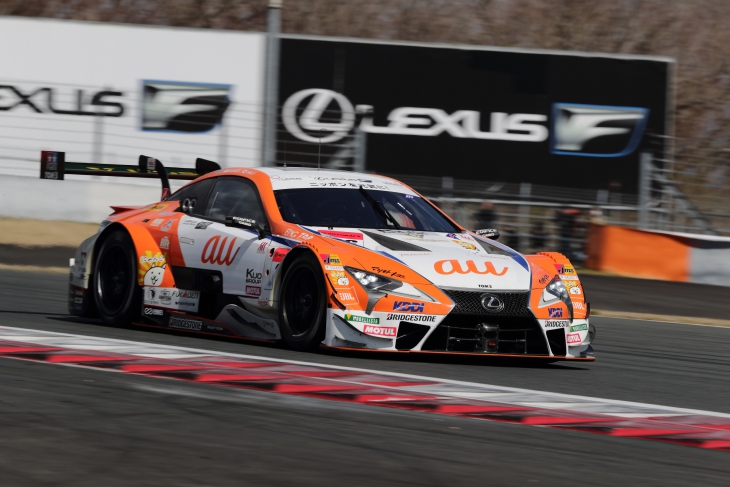 Nakajima and the number 36 TOM’s crew have a great track record at Suzuka with a win in the 2014 1000km, and Yuhi Sekiguchi, fresh off a dominant Super Formula win at Autopolis, is looking for his first Suzuka victory in Super GT.

There’s optimism around the #6 Wako’s 4CR LC500 (Kazuya Oshima/Kenta Yamashita) if they can nail down a good result in qualifying, as well as the #39 Denso Kobelco SARD LC500 (Heikki Kovalainen/Yuichi Nakayama) that’s sixth in the standings after a fourth-place finish in Fuji. Qualifying well typically sets up for a good result at the narrow Suzuka Circuit, both class winners won from pole position a year ago, but with the right strategy and with timely overtaking through traffic, it is absolutely possible to charge through the field.

Speaking of the GT300 class, there’s quite a few contenders across all the three sub-categories of cars, the FIA GT3s, the JAF-GT300s, and the Mother Chassis cars. Last year, the Bridgestone-clad #96 K-Tunes Lexus RC F GT3 won from pole position. Morio Nitta is back to challenge for his fourth career win at Suzuka, with his new rookie co-driver Sena Sakaguchi trying for K-Tunes Racing’s second win in three races in 2019.

The Honda NSX GT3s will be aiming to take the car’s first win at Suzuka: Between championship leaders Shinichi Takagi and Nirei Fukuzumi in the #55 ARTA NSX GT3, the #34 Modulo Kenwood NSX GT3 (Ryo Michigami/Hiroki Otsu), and the #18 UPGarage NSX GT3 (Takashi Kobayashi/Kosuke Matsuura), there’s three viable contenders out of the Honda camp, with multiple previous Suzuka winners – but the latter two have a definite advantage in Success Ballast compared to the 47kg on the ARTA NSX GT3. 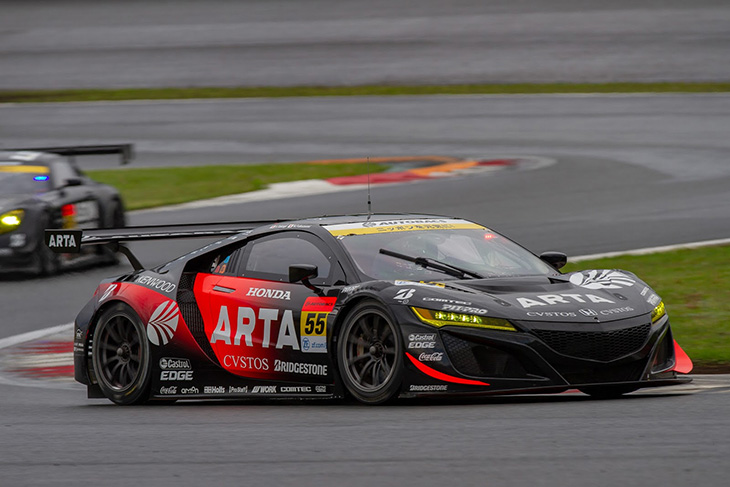 The defending champion #65 LEON Pyramid Mercedes-AMG GT3 (Haruki Kurosawa/Naoya Gamou) and the #4 Goodsmile Hatsune Miku AMG (Nobuteru Taniguchi) each have a car that’s well-suited to Suzuka. The #60 Syntium LM Corsa RC F GT3 (Hiroki Yoshimoto/Ritomo Miyata) and the #10 Gainer TanaX triple a Nissan GT-R (Kazuki Hoshino/Keishi Ishikawa) both have veteran drivers in Yoshimoto and Hoshino that have won here three times in GT300 before. And can the other Gainer GT-R, the #11 of Katsuyuki Hiranaka & Hironobu Yasuda, follow up their Fuji 500km win with another strong finish?

From the JAF-GT300/MC ranks, there have been questions raised about the short and long-term future of Tsuchiya Engineering and the #25 Hoppy Toyota 86 MC (Takamitsu Matsui/Kimiya Sato), thankfully, a boost of financial backing from their primary sponsors will ensure they’ll stay on the grid through all of 2019! Their nimble car has a chance to win – especially if they can run a full race distance on a single set of tyres! The #61 Subaru BRZ R&D Sport (Takuto Iguchi/Hideki Yamauchi) will be keen to bounce back from a DNF in Fuji, but it’s still uncertain if the two new Toyota Prius GTs from apr Racing have made enough progress yet to be a factor. 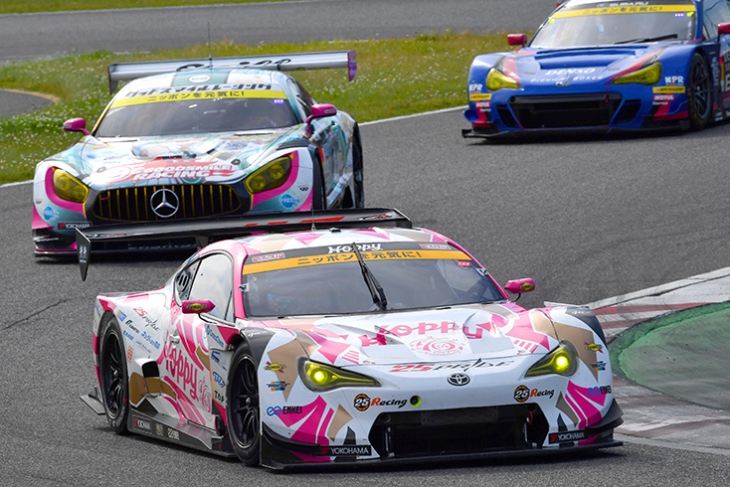 Fuji saw both the #7 D’station Aston Martin Vantage GT3 (Tomonobu Fujii/João Paulo de Oliveira) and the #720 McLaren 720S GT3 (Seiji Ara/Álex Palou) both make forward progress. The Vantage has already claimed victory at Suzuka in Super Taikyu back in March, while the McLaren is carrying the legendary colours that Kazumichi Goh’s team carried when the F1 GTRs took a 1-2 finish in 1996 on its debut.

And outside the “usual” suspects, the #88 ManePa Lamborghini Huracán GT3 (Takashi Kogure/Yuya Motojima) and the #21 Hitotsuyama Audi R8 LMS (Richard Lyons/Ryuichiro Tomita) both have the potential to put up a podium challenge.

The invitation is open to all on the greatest day in motorsport, whether it’s your first time watching Super GT, or you’re already a dedicated follower ready to sacrifice sleep. The green flag flies this Sunday at 2:30 PM JST (local time), 6:30 AM in the UK & Ireland, 7:30 AM throughout most of Europe, and 1:30 AM Eastern/10:30 PM Pacific in North America.