Tom Onslow-Cole took his second pole of the season (out of two events) and the third in a row, confirming his quality and giving cheer to SPS Automotive Performance many friends and guests present on home ground. 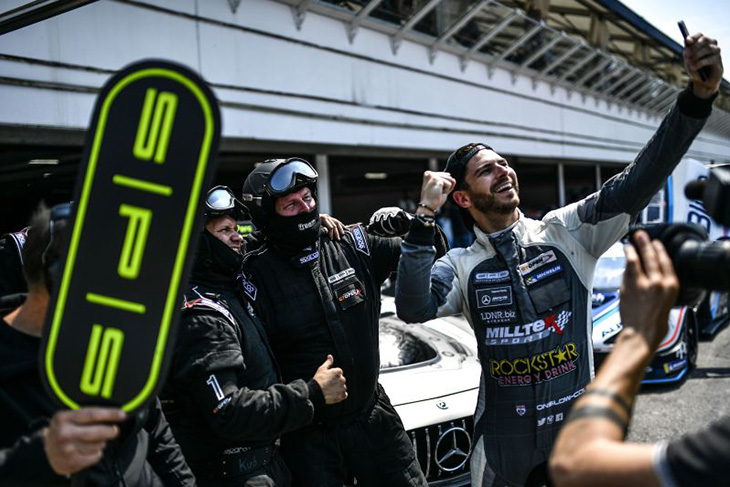 “It’s my first time at Hockenheim but I immediately liked the track, and the team did a great job”, said Tom, who shares the AMG GT3 with Valentin Pierburg.

Sharing the first row would be the Spirit of Race Ferrari of Matt Griffin (-0.355 s).

Indy Dontje (HTP/Winward Mercedes), who led the initial part of the session, and Alberto Di Folco (Ratón by Target Lambo) would share the second row.

Another Antonelli’s car, with Davide Roda at the wheel, scored pole among the Am cars.

The session was red-flagged a few minutes before the end after Fabio Onidi went off-track in turn 1 damaging the left side of his Lazarus Lamborghini.

The new McLaren 720S GT3 took its maiden International Series race win in the International GT Open (pictured top), as Fran Rueda and Andrés Saravia won Race 1 at Hockenheim, in the first visit of the series to the German track. 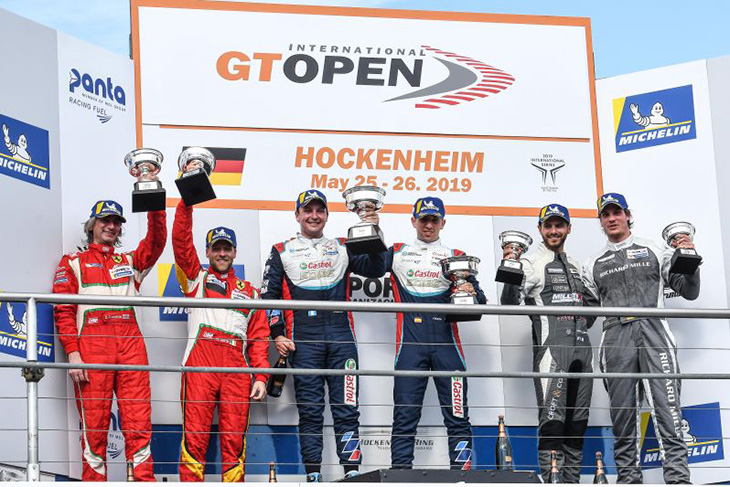 On a warm Saturday afternoon, Teo Martín Motorsport proved the competitiveness of the British machine, backing up the win with fourth too for the sister car driven by Martin Kodrić and Henrique Chaves.

The Spirit of Race Ferrari 488 of Matt Griffin-Duncan Cameron was a brilliant second (and Pro-Am winner), after leading in the first part of the race, while Mercedes was the third brand represented in the podium, thanks to the SPS Automotive AMG car of Valentin Pierburg-Tom Onslow-Cole, which had taken the pole position in the morning. Rueda-Saravia is now second in the standings, four points behind Costa-Altoè.

In the all-Mercedes Am category, Alex Hracowina-Martin Konrad (HTP Motorsport ) continue unbeaten, with their third success in a row, today ahead of Coimbra-Silva (Sport&You) and newcomers Janine Hill-John Shoffner (GetSpeed Performance).

It was a big battle at the start with Matt Griffin passing poleman Onslow-Cole at the first corner to take the lead. 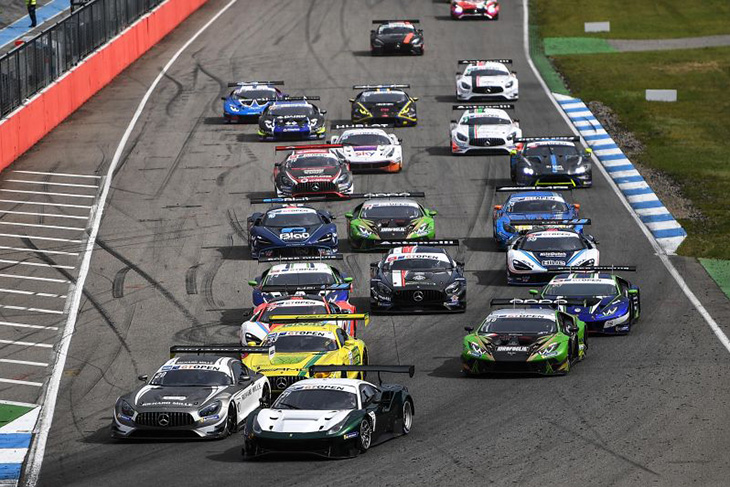 Behind were Dontje, then di Folco, Rueda, Grenier, Khodair,  Costa and Kodrić.

Lap 2, and Liang and Rovera collided quite heavily at turn 6, the Safety Car scrambled as Rovera, basically ok was taken to hospital for further checks.

The race resumed on lap 5, with a fight for sixth between Costa, Grenier, Khodair, Kodrić and Wilkinson, and also between Schandorff and Jäger.

Roda led the Am class until a late race off when he ended his day stranded in the gravel.

On lap 16, the window for driver change opened, with Rueda, Froggatt, Ramos and Wilkinson among the first to stop.

The three leaders (covered by only 6 seconds) pitted late (lap 21) and almost together. When all driver changes were made, Cameron led Saravia by just 1.3 seconds, with Pierburg third (-6s), then Chaves and Altoè (-9s) ahead of Ward, Turner, Siedler and Hahn.

On lap 24, Saravia grabbed the lead from Cameron.

Behind there was an engaging battle between Chaves and Altoè, but the Italian almost lost the car as he ran wide on lap 26.

One lap later though, he managed to pass and take fourth, continuing to climb the order, passing Pierburg for third on the last lap, but then a 3-second penalty for track limits saw him drop back to fifth.

Equally thrilling was the fight for seventh, with Siedler passing Turner in the closing laps.

The race ended with victory for Saravia ahead of Cameron, Pierburg, Chaves, Altoè, Ward, Siedler and Turner.

In Am, Martin took the third consecutive class win of the year ahead of Silva and Shoffner.

The Lazarus Racing #26 was withdrawn from the meeting following damage sustained in Fabio Onidi’s accident at Turn 1 in qualifying.

Based on an analysis of driver performances in the Pro-Am class, the Organizing Committee decided to re-categorize a number of cars. Cars #12, 19, 96 were moved to the Pro class (losing the handicaps they had acquired in Pro-Am). Cars #33, 66 and 93 remained in the Pro-Am class, with an additional handicap of 5 seconds.

Norbert Siedler took his first pole in the GT Open, posting a time of 1.37.399 in qualifying ahead of Sunday’s Race 2 at Hockenheim. The Austrian beat by a mere 5 thousandths of a second his teammate Giacomo Altoè, in what yielded an all-Emil Frey Racing first row. 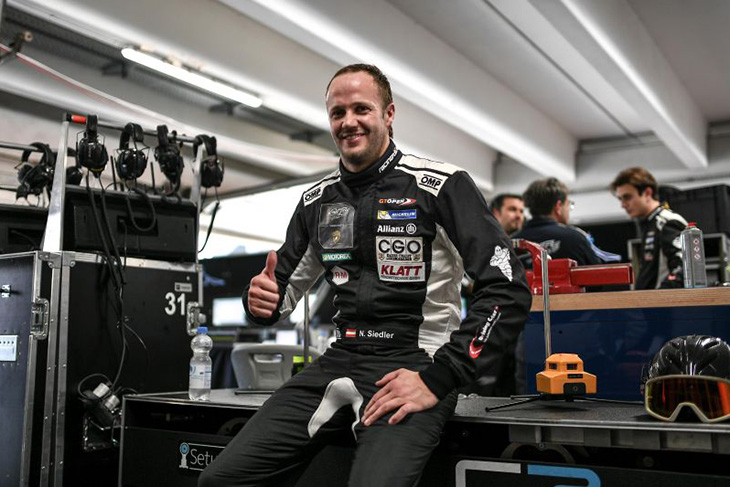 Behind the Lambos, in row 2, would be the Optimum Aston Martin of Darren Turner, who led the initial part of the session, and the Teo Martín McLaren of Martin Kodrić, with Eddie Cheever (Tempesta Ferrari) fifth-fastest and taking the third row alongside Nicolas Pohler (Lazarus Lambo). The first five cars were covered by less than one-tenth of a second!

Worthy of a big round of applause are the crews of Ratón by Target and Antonelli Motorsport, who worked all night but were able to rebuild their cars heavily damaged in yesterday’s collision.

The happiest of all was Jiatong Liang, who caused the accident by braking too late: “I feel relieved for everybody involved, and mostly for our rivals, as my mistake ruined theirs and our race.”

Emil Frey Racing scored the team’s first 1-2 of the season in their newly arrived Lamborghini Huracan GT3 Evos in Sunday’s race 2, as Norbert Siedler-Mikaël Grenier, starting from the pole, won Hockenheim, ahead of teammates Albert Costa-Giacomo Altoè, in a great exhibition of the Swiss Lambos. 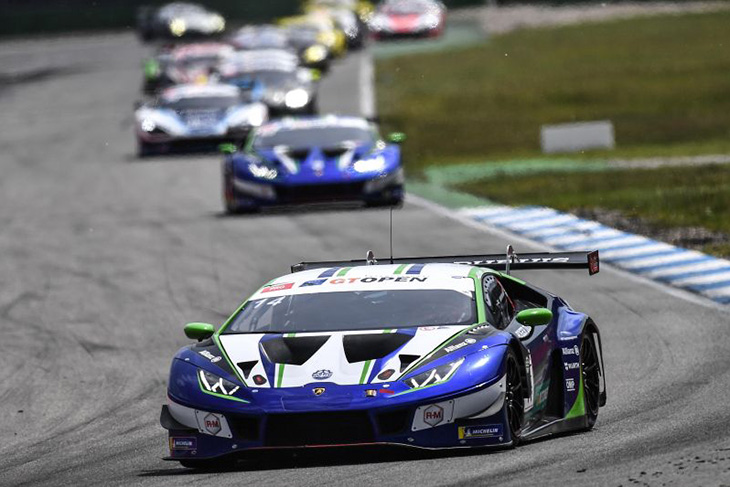 The two pairs are now leading the overall standings, with Costa-Altoè ahead by just 7 points.

On the podium too, with an excellent third place finish, the Optimum Motorsport Aston Martin of Ollie Wilkinson and Darren Turner, with Wilkinson mounting a fine late race defence against the efforts of both Miguel Ramos (SPS Mercedes) and Martin Kodrić.

There was a close fight too in Pro-Am, with final victory going to the HTP/Winward Mercedes of Russell Ward-Indy Dontje, while Martin Konrad-Alex Hrachowina (HTP Mercedes) scored a fourth success in Am.

Norbert Sideler (who took pole by a mere 0.005s) took the lead at the start ahead of teammate Altoè, while Chaves, Turner, Cheever and Crestani fought hard for 3rd but stayed in that order of the end of lap 1.

Behind followed Giammaria, Pohler, Ling and Leo, while Roda stopped in the pits after just one lap.

Positions stabilized, as Siedler pulled away with searing pace, building a 3-second gap by lap 5.

Konrad, the leader in the Am, climbed up to 11th overall.

The race stayed close but with almost no positional changes until the pit stop window opened on lap 16, with Saravia, Cameron, Ward, Habul, Hahn and Pierburg amongst the first to pit for driver changes.

Shortly after the pit stop, Khodair had contact with Lenz and the Brazilian was dealt a 5-second penalty.

After all driver changes (lap 22), Grenier led with a 6-second gap to Wilkinson, 7 seconds on Costa and 8 on Kodrić.

Not much further back was Ramos, De Marco, Liang, and the three top Pro-Am runners, Froggatt, Schandorff and Dontje, soon joined also by Liang.

The second place battle was joined with Costa passing Wilkinson on lap 25, and then trying to reduce the gap to Grenier, but with not much success.

On lap 29, Kodrić attempted to pass Wilkinson too but ran wide losing a position to Ramos as he recovered.

Costa closed the gap to Grenier, who was suffering some tire degradation but the Canadian held the fort until the end. 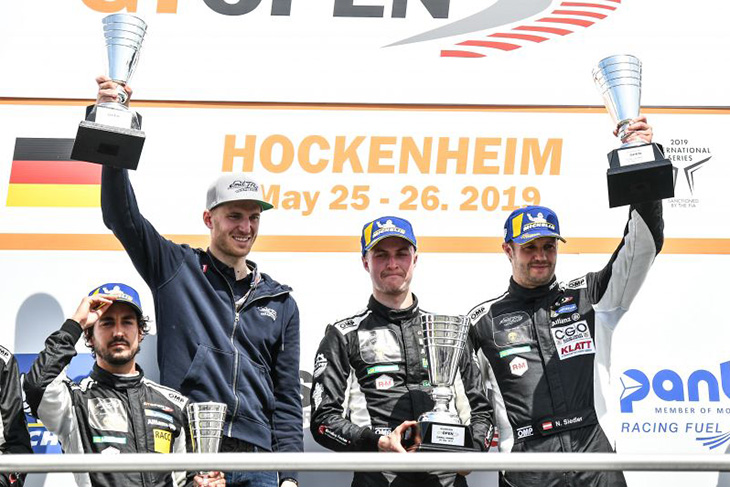 In Am, Hrachowina won ahead of Cipriani and Silva.