The three-hour Silverstone 500 race always attracts one-off and exploratory entries, and the 2019 edition is no different, with the JMH GT3 Lamborghini, an extra Balfe Motorsport GT4 McLaren, the Generation AMR SuperRacing GT4 Aston Martin and the ERC Sport GT4 Mercedes joining the fray for the championship’s blue-riband event.

Another new name on the entry list is here to stay, however: the G-Cat Racing Porsche 911 GT3 (above) of Greg Caton and long-time Carrera Cup entrant Shamus Jennings. While WPI Motorsport altered their plans to run a 911 due to noise-limit issues, G-Cat persevered and are present and correct at Silverstone, having initially planned to debut at the Oulton Park season opener.

“This was always going to be a training year,” Caton told DSC just after FP2. “Shamus is new to this, new to ABS and traction control, having raced Carrera Cup for four years, and it’s the same for me. He decided he wanted a low-key year, we tried to get organised for the first round but it was too much pressure.

“Oulton isn’t a great place to start off, anyway. We had two days’ testing at Hockenheim when we picked the car up, but it was torrential rain, so we didn’t do many laps; we didn’t want to risk it. Then on Friday in the rain here at Silverstone we were just running systems checks with the new radios and data loggers, so FP1 was our first proper running, really.

“We want to take it easy and not make mistakes; a lot of others arrive with a lot of mileage under their belt, but this is our testing really. At the same time, we want to enjoy it, we’re competitive but also realistic – we hope during the year to move forward and mix it up with the rest of the grid.

“Qualifying will be our first time in the car on slicks, so don’t expect too much! The capabilities of the car are beyond what we expected, so we’re the limiting factors as drivers for the moment.” 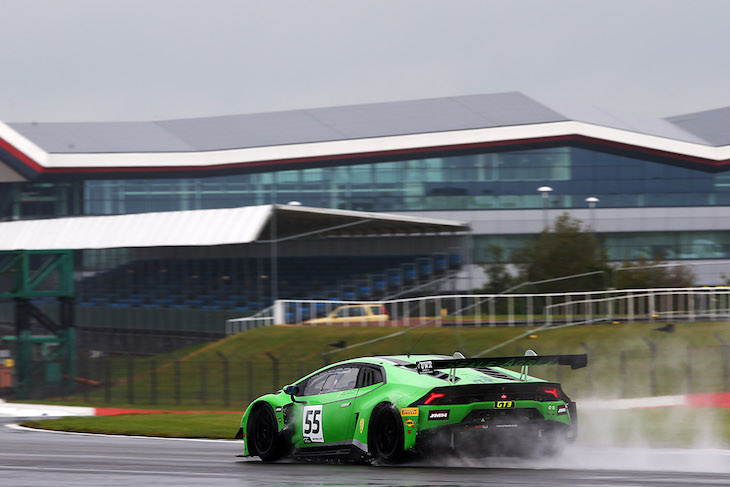 Also learning more about British GT this weekend is current GT Cup frontrunner John Seale, guided by the experienced Jamie Stanley in the JMH Lamborghini (above). “The aim for us is to win GT Cup this year and then move up to British GT full-time in 2020,” Stanley explained.

“We’re in the ballpark pace-wise, but this weekend is for John to learn and get up to speed with what he needs to know about British GT. It’s also good for me to get a bit of mileage around the likes of [Phil] Keen and [Dennis] Lind – having them around pushes me a bit more than running in GT Cup.” 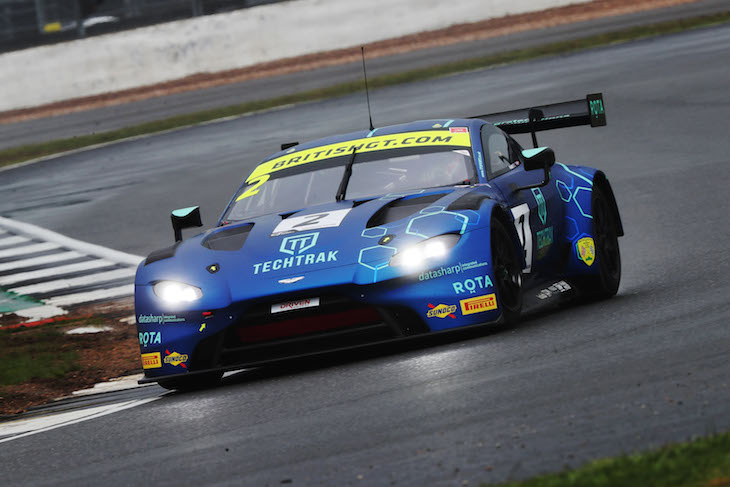 Over at TF Sport, Mark Farmer explained to DSC his difficulties thus far in adapting to the new Aston Martin Vantage GT3 (above). “With the old car, I had it nailed, I knew it inside out and how to drive it,” he said. “But this one is very different, the style and technique needed is very different, so I’m a bit off the pace really, but it’ll come when I get into the swing of the car.

“The new Vantage is an aero car, the old one was very heavy, it rolled a lot and had a lot of understeer, so you had to really load it up in the corners with a lot of heavy trail braking. The new car has very good platform and really strong aero, so you don’t need to trail brake.

“Right now I’m over-slowing it, I have to learn to brake lighter and trust the steering wheel. In the old car you almost had to steer with your feet and hands. It’s just a process for an old guy like me, to get the hang of an aero car!” 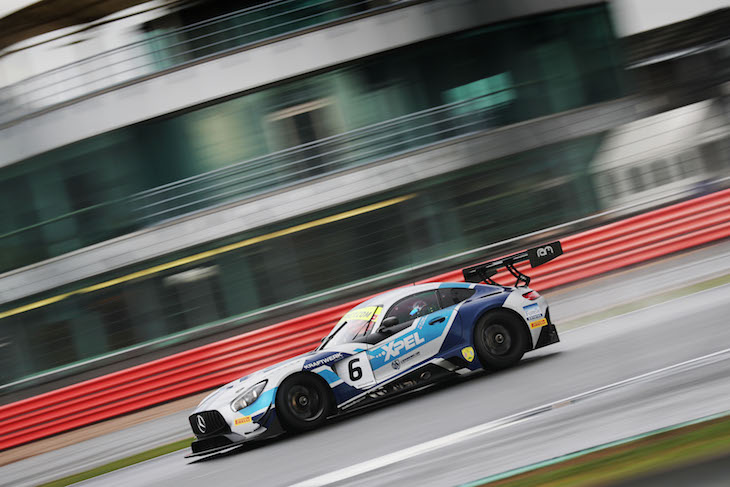 Farmer’s fellow Am driver Ian Loggie is back and fighting fit at Silverstone, having had to sit out Snetterton in the aftermath of a cycling injury. The Ram Racing Mercedes man told us: “I’m 90% there; the arm still feels a bit wooden, but I was out in the car on Friday and it was all good.

“We’re still looking at the championship; it depends what happens here, really. If we could win and some of the guys at the top of the table hit trouble, we could be back in contention. Having zero points so far means we’re looking for wins, and we’re coming to every race targeting the podium anyway.

“The car’s definitely good and we’ve shown our pace. We’ll be focused on qualifying high up, when the Ams start the race it can be a bit of mish-mash battle in the middle of the pack, so it would be good to get ahead of that at the start, then decide on our strategy from there.” 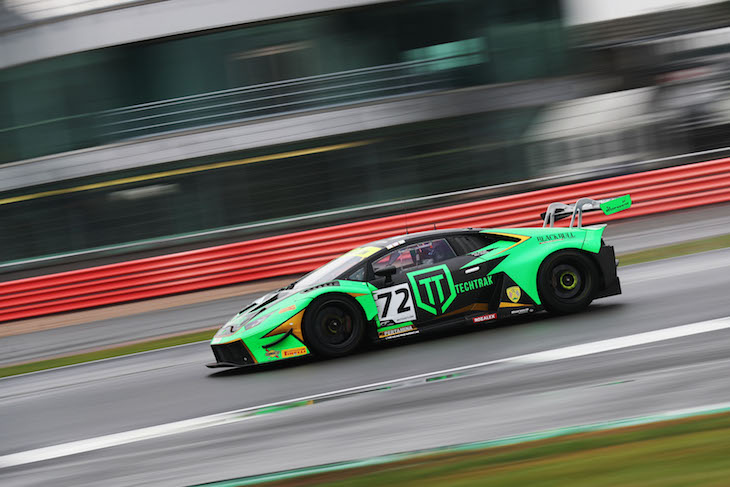 In the Barwell Motorsport garage, a name more familiar to sportscar racing fans from Radio Le Mans broadcasts and PA commentary could be found nestled among the engineers: renowned strategy guru Paul Truswell has been recruited by team director Mark Lemmer to lend his expertise to the Lamborghini squad at the Paul Ricard 1000km, Silverstone 500 and Spa 24 Hours races.

“In effect, this is a two-stop race, but the rules say you have to put an extra stop somewhere,” Truswell explained. “You either split it into four quarters, or wait for a safety car, but if you do that, you have to make sure you’re not compromising the 100-minute overall time limit for the Pro drivers.

“That leaves you with 80 minutes to have the Am driver in the car, minus whatever time you spend in the pits. In effect, you are looking for a safety car, but last year there wasn’t one. The other issue for us is the success penalty from Snetterton, which has to be added to our final pitstop. 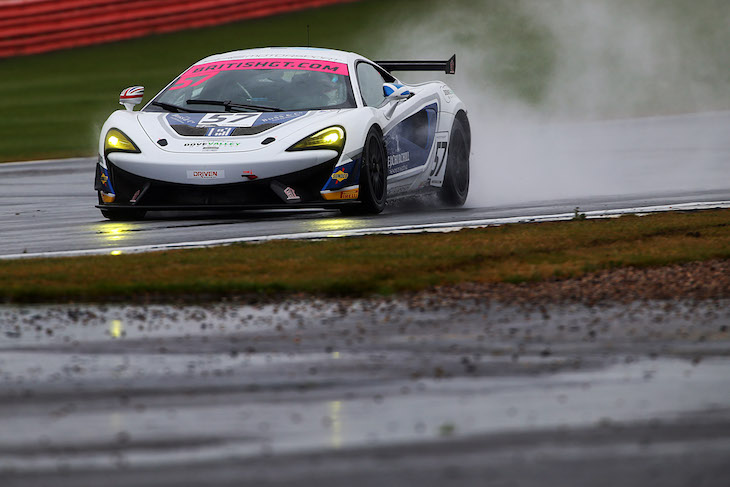 In GT4, the free-practice sessions saw HHC Motorsport duo Callum Pointon and Dean MacDonald continue to show the kind of form that has them leading the class championship going into the Silverstone weekend.

“It’s a new car for us as drivers and for the team, plus we’ve done minimal testing, so every time we get in the car we’re improving,” a confident Pointon told us. “It looks like mixed weather for the weekend, but we’re comfortable in the wet or the dry to be honest.

“McLaren certainly seems to be the car to have at the moment, but the Mercedes is looking stronger and stronger, both at Snetterton and in free practice here. If it’s wet in the race, there’ll probably be a safety car, but we’re not hoping for one.

“We want good clean racing, but if we can benefit from a safety car then all well and good. Our goal is to qualify on the front or second row, but we can definitely fight from any position.” 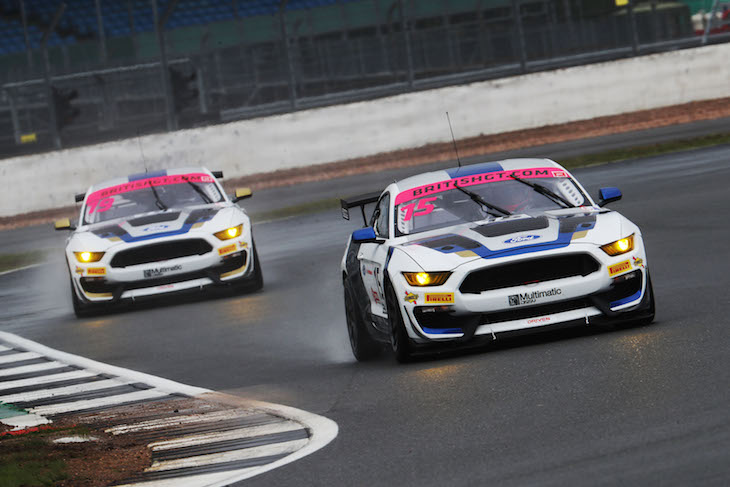 In the #19 Multimatic Mustang, 2017-18 Asian Le Mans Series champion and current Super Formula and Super Taikyu racer Harrison Newey is making his GT4 debut, alongside American Chad McCumbee. The F1 design maestro’s son is enjoying racing back on home turf and spent the free-practice sessions getting used to faster traffic.

“It’s interesting, I’m used to doing all the passing in LMP2, so looking in your mirrors is weird,” he admitted. “I didn’t really know what to expect from the car, but I’m definitely enjoying it; there’s not much grip and it moves around a lot! I’ve no idea where we’ll be in the race really, it all depends on our pace in the dry.” 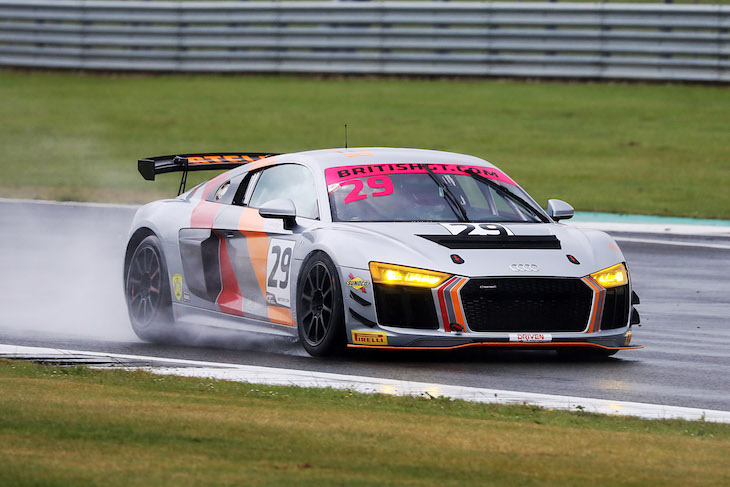 Finally, in GT4, Richard Williams’ pace in the Steller Audi (above) last time out in Snetterton has seen that car, which he shares with Sennan Fielding, shift across from Pro-Am to the Silver Cup class from this round onwards. “It’s a compliment to Richard, I guess,” said Fielding. “I think we’re still capable of getting a really good result.”