Graham Davidson secured his maiden British GT pole position at Silverstone on Saturday, qualifying together with his co-driver in the #47 TF Sport Aston Martin, Johnny Adam, at the front of the grid for Sunday’s three-hour race.

Taken together, Davidson’s 2:02.554 and Adam’s 2:00.327 laps were enough to put them fastest of the GT3 runners, 0.35 seconds better than the aggregate effort of Ian Loggie and Calum Macleod in the returning Ram Racing Mercedes, which will join the #47 Aston on the front row.

“I’m delighted, it’s nice to get my first pole in British GT,” said Davidson after the session. “I had a little off on the grass during another lap, so I think I could have gone even faster.”

Adam added: “The car’s been feeling really good in the wet and the dry; this was an important session with everyone on slick for the first time after all the wet running we’ve had so far.”

The second row of the grid will be filled by the Shaun Balfe/Rob Bell McLaren in third and the Mark Farmer/Nicki Thiim TF Sport Aston Martin in fourth, the latter car repaired over the lunch break and early afternoon by the team’s mechanics following Farmer’s free-practice off.

And it’s another Aston Martin in fifth, this time the Beechdean Vantage of Andrew Howard/Marco Sorensen, ahead of the Richard Neary/Adam Christodoulou Abba Racing Mercedes in sixth.

The two Barwell Lamborghinis had an uncharacteristically quiet qualifying, ending up with seventh and eighth place respectively for the #72 Balon/Keen and #69 de Haan/Cocker cars. 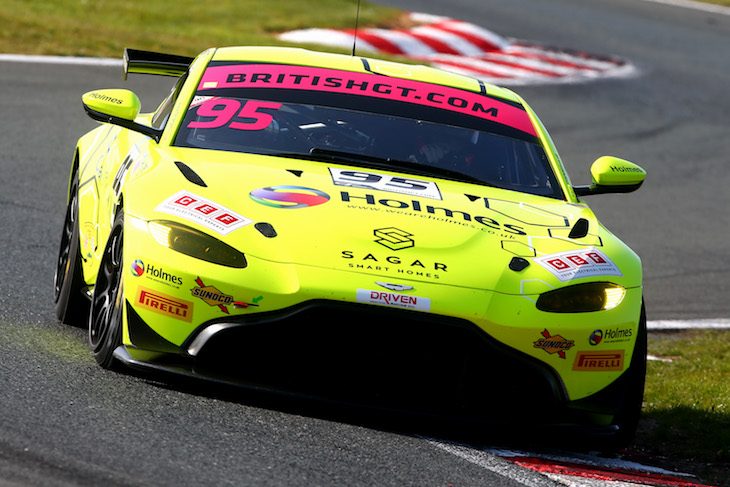 In GT4, meanwhile, pole went to another TF Sport entry, the #95 Aston Martin of Patrick Kibble and Josh Price (above).

Their combined best time of 4:25.285 put them in P1 by almost half a second over the Snetterton race-one winning Steller Audi of Richard Williams and Sennan Fielding, who together recorded a time of 4:25.737.

The second row in GT4 will be populated by the #66 Jones/Malvern Team Parker Mercedes, while the top qualifying McLaren is the fourth-place #4 Tolman car of James Dorlin and Josh Smith.

Fifth and sixth on the grid for Sunday are the #57 Dean MacDonald/Callum Pointon HHC Motorsport car (the championship leaders) and the #15 Multimatic Ford Mustang of Seb Priaulx and Scott Maxwell.

Sunday’s schedule sees a 10-minute warm-up session for all runners at 9:00 am, with the centrepiece three-hour race happening between 12:35 pm and 3:35 pm. You’ll be able to watch a live stream right here on DSC.