The full grid for the race can be viewed here, with the only change from qualifying order the #32 Track Focused KTM dropping to the back of the GT4 field due to a five-place grid penalty for an on-track incident in race two at Snetterton. You can watch the race live from 12:35 UK time here. 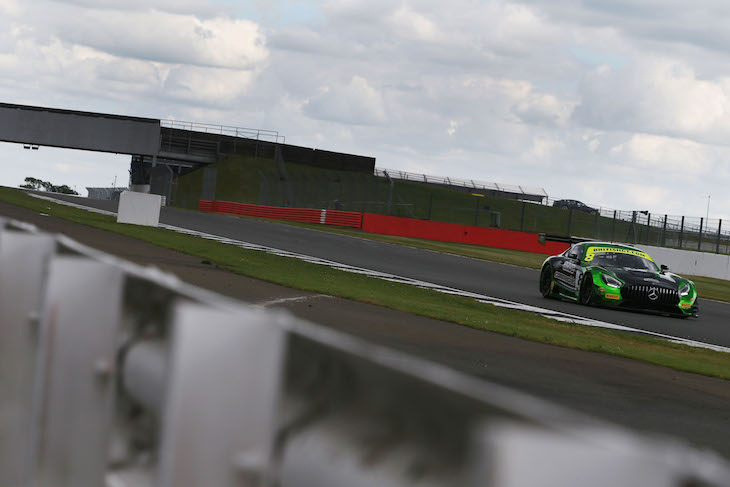 Adam Christodoulou topped the timesheets in warm-up in the Team Abba Racing Mercedes, going around in 2:01.837, ahead of Nicki Thiim in the #2 TF Sport Aston Martin on a 2:02.625 and Calum Macleod in the Ram Racing Mercedes on a 2:03.820.

Fastest in GT4 was Max Buhk in the ERC Sport Mercedes, on a 2:13.105, ahead of the GT Marques Porsche driven by Dino Zamparelli and the #62 Academy Motorsport Aston Martin with Alex Toth-Jones at the wheel. 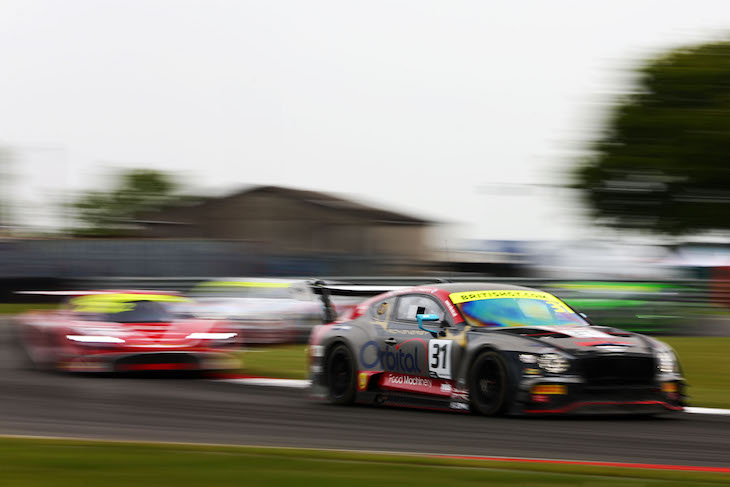 Seb Morris was fourth-fastest in the JRM Bentley, which on Saturday qualified down in 11th for the race. Co-driver Rick Parfitt tweeted afterwards: “We tried something, suffice to say it didn’t work, but hey, we’ll fight through from 11th on the grid!” 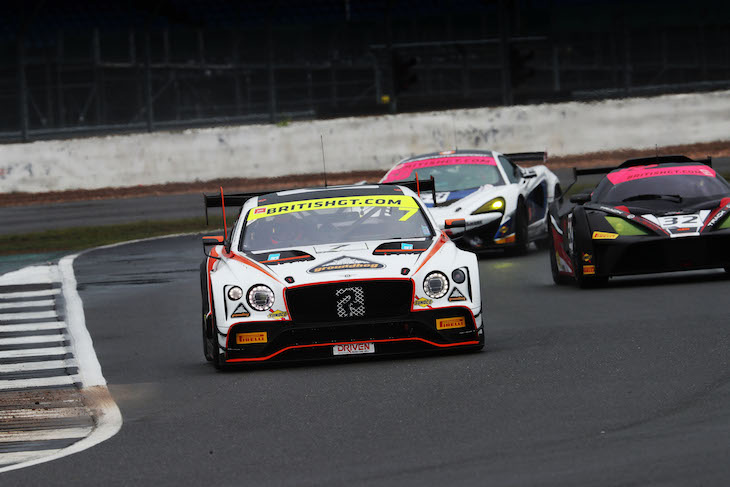 Fifth-fastest, in Team Parker’s Continental GT3, was Ryan Ratcliffe. The Welshman was unable to take part in the Pro portion of qualifying on Saturday after the car failed to fire up for the session, so they start 16th and last of the GT3 runners on Sunday’s grid.

“It makes it a bit more fun for Glynn [Geddie] in his first stint,” Ratcliffe told DSC during warm-up, “but I’m sure it’ll be alright. The boys were up all night fixing the car, Stuart [Parker] didn’t get back until 5:30 am. But it’s sorted now, the car was struggling to pull away all the time yesterday, but it’s been fine this morning.”

Series newcomers the G-Cat Porsche and JMH Lamborghini were sixth and seventh-quickest in warm-up, ahead of the Balfe McLaren, which qualified in third for the race. “We’re getting there, there’s a little more to come,” Rob Bell told us. “Shaun [Balfe] really likes the new 720S and he seems to be closer to my pace than every, so I’ll have to be careful, if he gets too quick, I’ll need to slow him down!

“Developing the 720S, we aimed for a car that would be easier to drive, and I think we’ve delivered on that. If we stay out of trouble we should be in the mix for this race, I’m quietly confident. With so many cars on the grid, there’s a high percentage chance of a safety car. You’d expect to see one in the first 20 minutes or so, then everyone will have found their feet.” 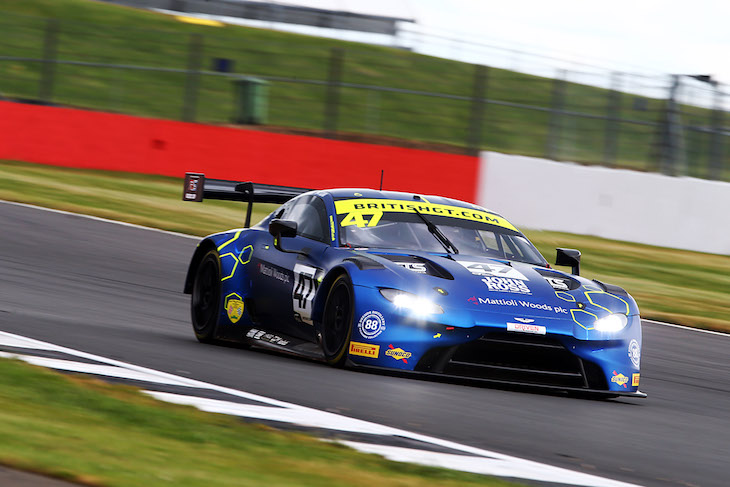 Meanwhile, in the TF Sport garage, polesitter Graham Davidson (sharing the #47 Vantage with Jonny Adam) set out his plan for the race. “To be on the front row is where we wanted to be, so we could avoid the trouble, get through turn one clean, get our heads down and make progress,” he said.

“I’m sure Ian [Loggie] will put up a good fight from second, so it’s just a case of managing that. We don’t want to get caught up in anything; time and again, we’ve seen British GT races lost by unnecessary battles.

“For me, it’s just about managing my pace, looking after the tyres, not trying to do anything too heroic, getting through the first stint, and keeping the car in the first couple of spots. People should start to pit from about 50 minutes in, starting from P1, we’ll be trying to go for a longer first stint, so a safety car at around 60 minutes, towards the end of my stint, would be ideal.”

While team-mate Mark Farmer in the #2 is still getting to grips with Aston’s new, more aero-dependent GT3 machine, Davidson has gelled with it faster. “I got on well with it from day one of testing,” he said.

“At the start of the season, the weather at Oulton threw up some surprises in terms of setup and handling – it came to light that the car is quite sensitive to changes in track temperature, and small changes to the setup can have big effects on lap times.

“It’s a lot of learning, not just for me, but for the team and Aston as well, just a big learning curve. But I think we’re making sense of it all now and getting to grips with it. Obviously, the lap times are coming now and also I think the Balance of Performance is a bit better.

“Before, it was just impossible to fight with the Bentleys and Lambos. They had so much straight-line-speed that you could never get alongside to attack or make any moves. So far this weekend it looks like a much more level playing field.

“I normally love the mechanical-grip-type cars that slide around a lot and need wrestling. This is quite different to that, it has a lot more downforce; the balance of the downforce front to rear is the most tricky thing to get right in the setup, and for me to adjust to that has been interesting.

“But it feels so planted in the high-speed corners and gives you a real sense of being on rails. In the slower corners when you lose the aero effect it does become a handful and you can wrestle with it.” 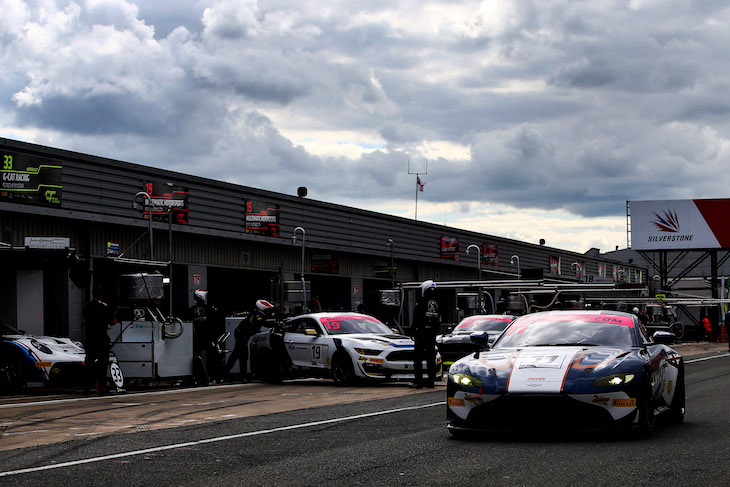 In GT4, Pro-Am category leaders Martin Plowman and Kelvin Fletcher start seventh on the grid in the #11 Beechdean Aston Martin, with Plowman feeling good progress has been made from Snetterton.

“We’d gone down a bit of a setup black hole and lost our way,” he said. “With a couple of weeks to reflect on that, we’ve gone back to basics and hit the reset button.

“The car was awesome in the rain on Saturday; difficult to drive on the limit, but a quick car is always going to be difficult. For the dry setup, we just threw a dart at it and the setup was dialled in for qually.”

Plowman is expecting a closer fight with the McLaren and Mercedes runners especially today. “I think in the previous races, we couldn’t really fight them with the top-speed disparity. In terms of laptimes, we could turn in a good time before, but in terms of raceability, the McLarens could just drive past us.

“But we’ve been given back some power this weekend and I hope around a track like Silverstone, we’ll be able to fight with them down the straights. I think SRO has done a great job, all the brands are equalised now. It’s a hard job, but they’re as close as they can be.”

Strategy-wise, we’re lucky that Kelvin [Fletcher] is one of the best am drivers I’ve been with; we’re not limited by his pace, we have that flexibility to leave him out longer if the race calls for it. We’ve got a plan, of course, but as soon as the green flag drops that can go out the window!

“Overall we’re both very happy with the new car and new team this season,” Plowman continued. “There’s a lot of learning involved, the team have been doing it longer than us, so it’s about us adapting to new car and team. I’m getting there – I wouldn’t say I’m 100% comfortable in the car yet. We can do good times, but you have to have that ultimate faith in the car and I’m still getting there myself.”