Prior to that, Emil Frey stole the show in the opening race of the season, after a strong performance from Mikael Grenier and Norbert Siedler.

Mikaël Grenier and Norbert Siedler saw off a late rain shower on Saturday in the opening race of the weekend, to take the win for Emil Frey Racing and move up to the lead in the title race, tied on points with their teammates Albert Costa and Giacomo Altoe. 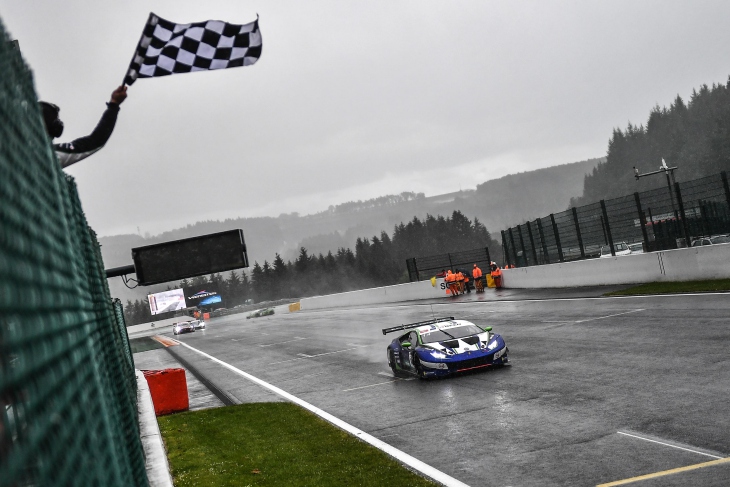 To take they win they beat the #10 SPS Automotive Mercedes of Fabrizio Crestani and Miguel Ramos and the #59 Teo Martín Motorsport McLaren 720S of Martin Kodrić and Henrique Chaves.

Patrick Kujala and Adrian Amstutz meanwhile, took win in Pro-Am, on the one-off return of Imperiale Racing to the series, with a 2018-spec Lambo, while Antonelli Motorsport conquered Am with a 1-2 finish, Davide Roda putting in great performance to beat teammate Giuseppe Cipriani and the Sports&You duo of Luis Silva and Antonio Coimbra.

It looked like Imperiale was on for the win, as after the round of stops in the race, Adrian Amstutz leading the way by 2.6 seconds over Miguel Ramos in the SPS Mercedes. But on Lap 22, Ramos found a way through into the lead.

The Portuguese former GT Open champion’s lead didn’t last long though, as a hard-charging Norbert Siedler muscled his way past a lap later to give Emil Frey the lead of the race. Then the rain came, bringing out a safety car after multiple offs from drivers struggling in the changing conditions.

Siedler crossed the line first, with Ramos holding on to second for SPS. The first of the Teo Martin McLarens eventually finished third, ahead of the #63 Emil Frey Lamborghini of Albert Costa and Giacomo Altoe and the Imperiale Lamborghini which dropped to fifth before the end.

Another win for Teo Martin in Race 2

After a podium in Race 1, Teo Martin’s fortunes continued in Race 2, the team taking a 1-2 finish, building on its first victory with the 720S GT3 back in Hockenheim.

Fran Rueda and Andrés Saravia won the race in the #17 example, bouncing back from a disappointing outing in Race 1, when the car was taken out on the warm up lap by the #66 Vincenzo Sospiri Racing Lamborghini.

Behind, completing the 1-2 finish was Henrique Chaves and Martin Kodrić in the #59 McLaren, which took the lead in the overall standings with its second strong haul of points from the weekend. They also benefitted from a bad day for the Emil Frey Lamborghinis, Mikaël Grenier and Norbert Siedler finished ninth and Albert Costa and Giacomo Altoe retired with a brake issue.

Third overall and winners in Pro-Am was the SPS Automotive duo of Valentin Pierburg and Tom Onslow Cole on this occasion, the duo finishing strong following Onslow-Cole’s efforts in Qualifying, his third pole in three tries.

They finished ahead of Kenny Habul and Thomas Jäger (Sun Energy 1 Mercedes) and Patrick Kujala and Adrian Amstutz (Imperiale Lambo).

In Am Davide Roda (Antonelli Motorsport) took another Am win, ahead of the two other Mercedes of Martin Konrad and Alex Hrachowina (HTP Motorsport) and Janine Hill and John Shoffner.

Early in the race Onslow-Cole held onto the lead but was unable to pull away from Albert Costa in the #63 Emil Frey Huracan. The safety car was eventually called anyway before the round of stops after an off from Luis Silva’s #99 Sports&You Mercedes into the barriers.

After the stops, Pierburg took over from Onslow-Cole and held a five-second lead over Marcelo Hahn in the #16 Teo Martin McLaren, who took second after Altoe retired the #63 Lambo.

But Hahn spun after Fran Reuda in the sister #17 720S GT3 put him under pressure, dropping him out of the top 10. This cleared the path for the Spaniard to gun for the lead, which he did later in the race.

Kodric in the #59 Teo Martin McLaren then followed his teammate through, securing the 1-2 finish.