The pack of LMP1 Privateers are ready to tackle the three-part Qualifying here at Le Mans. And it’s SMP Racing and Rebellion Racing prototypes, in particular, are likely to impress on pace over a single lap at La Sarthe, after a year of development for their cars in the 2018/19 FIA WEC ‘Super Season’.

In Free Practice Rebellion Racing were looking fairly comfortable on the timing sheets at the close of the session with #3 third on the times, immediately ahead of the #8 Toyota, with a 3:19.960. This was only half a second slower than Toyota’s best time from the Test Day.

Nathaniel Berthon is the third driver in the #3 Rebellion R13 – Gibson, tasked with helping his (full-season) teammates Thomas Laurent and Gustavo Menezes end the ‘Super Season’ by securing “best of the rest” behind the Toyotas in the P1 Championship.

After Wednesday’s practice session Berthon seemed relaxed: “It’s not too bad, we didn’t focus on lap time, we were just doing our stuff. The temperatures were completely different from the test day so we have been working on set-up.

“We are trying to pull everything together and it seems good. The aim is to get everyone to do their night laps in qualifying tonight, we don’t have any pressure. Gus [Menezes] did the fastest time and I drove at the end when it was a bit damp. It was tricky but we’re happy with the car overall.

“I think the track is quicker than it was at the test day rather than that we have improved that much, that’s my opinion anyway. It is strange to see the Toyotas like that [on the timing screen], I think that they can be much faster but in a few hours I think we will know!”

SMP had also improved their pace since the Test Day in Free Practice, ex-F1 man and Le Mans debutant Stoffel Vandoorne in their #11 BR1 posted an almost identical time to Menezes (a 3:19.931) to go second quickest. 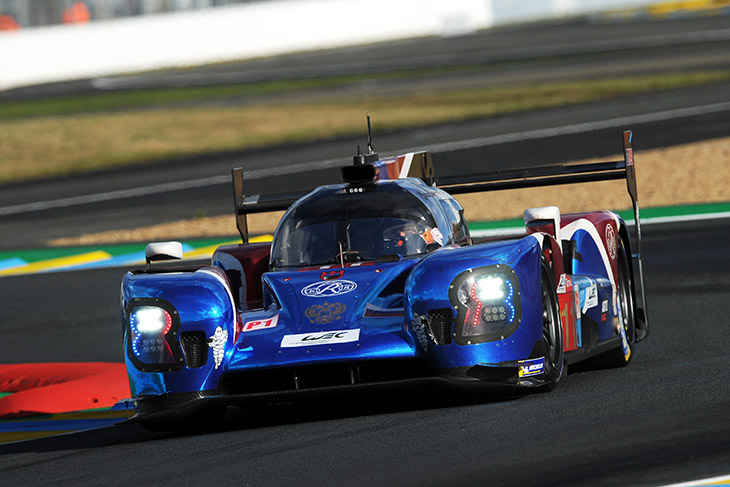 Egor Orudzhev in the #17 car confirmed that he too thought “the track is much better than it was at the Test Day, conditions were much quicker.

“We know that our pace is very similar to Rebellion and I don’t think the fastest time in qualifying between us will be down to set-up, it will be whoever gets the cleanest lap. That is likely to be quite early in the session if it stays dry.

“There is no need to risk anything because the Toyotas will be first and second so we will be somewhere between third and sixth and it doesn’t really matter which for a 24-hour race.”

Orudzhev’s car finished the practice session sixth quickest, behind the #1 Rebellion but two seconds faster than the #10 Dragonspeed BR1, with the #4 ByKolles Enso CLM P1/01 still nearly 3.5 seconds off the pace.

LMP1 is likely to play out with the Toyota’s building a lead as a cushion in case of any problems. While the TS050 HYBRIDs have been near-bulletproof during the ‘Super Season’, they are more complex cars and have struggled with reliability at times before.

SMP and Rebellion are likely to be fighting between themselves and hopefully providing entertainment and excitement in their battle for the last overall podium spot. And who knows, if they keep it clean and poor luck strikes Toyota, maybe second or first spot will be up for grabs too?

Whatever Toyota end up doing it looks like game on between Rebellion and SMP at the very least.