Toyota finished 1-2 in the second qualifying session for the Le Mans 24 Hours, with the #7 ahead of the #8. Kamui Kobayashi set the fastest time overall in the #7 and his 3:15.497 was just over four-tenths ahead of the sister car, on a 3:15.908 set by Kobayashi’s fellow Japanese driver Kazuki Nakajima.

The fastest non-hybrid time went to the #11 SMP Racing car, with former Indycar racer Mikhail Aleshin setting a 3:16.953, almost 1.5 seconds off the lead Toyota. The first of the Rebellions was next up, with three-time race winner Andre Lotterer setting a 3:17.313 to go fourth in the #1. The car had its lap times from Wednesday’s qualifying session deleted due to not declaring a new fuel-flow meter to the stewards.

The #3 Rebellion set a 3:18.884 with Thomas Laurent behind the wheel, but shortly after setting the time, the engine expired, spilling a considerable amount of fluid on track between the second chicane and Mulsanne corner. It stopped on track just after the latter, causing a 20-minute red flag while the car was recovered and the track surface was cleaned.

The #10 DragonSpeed was beset by gearbox issues for the entire session, meaning it didn’t improve from the 3:20.200 that Ben Hanley set last night. The ByKolles was three seconds off the DragonSpeed, with Tom Dillmann setting a 3:23.726 to complete the LMP1 field. In LMP2, the #31 DragonSpeed car was again the pick of the bunch, with Pastor Maldonado setting a 3:26.490, a good half-a-second faster than his effort from Wednesday night (above). The #38 Jackie Chan DC Racing grabbed second, with Stephane Richelmi logging a 3:26.821, while the #36 Signatech Alpine completed the ‘podium’ – although its time of 3:26.935 had actually been set on Wednesday night by Nicolas Lapierre.

The #22 United Autosports Ligier took sixth, but didn’t manage a better lap than Wednesday evening’s session, when Filipe Albuquerque set a 3:27.338 . Essex boy Will Stevens was next up in the #23 Panis-Barthez Competition Ligier, lapping the circuit in 3:27.790. 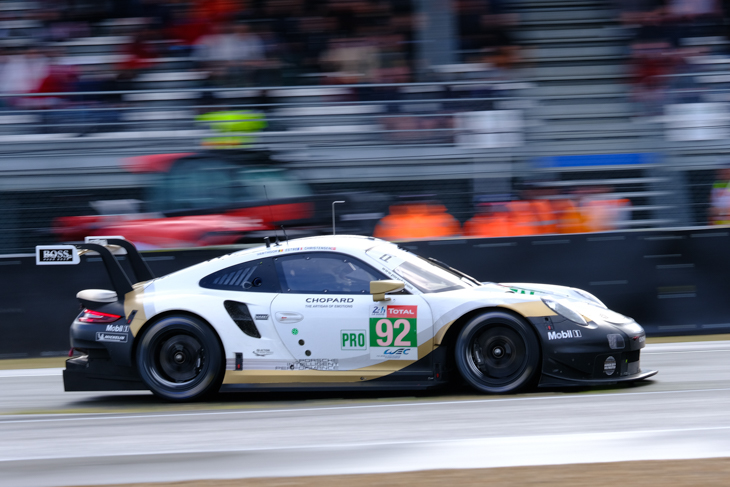 Michael Christensen in the #92 Porsche took control of provisional pole position with a 3:49.388 in the final 10 minutes of the second qualifying session, taking away the top spot from the #67 Ford.

The #63 Corvette also shot to the fore of the field late in the going with a 3:49.424 from Antonio Garcia. Corvette had been near the bottom of the order for much of the session, but with the sun heading towards the horizon, Garcia started to flex the muscles of the Corvette.

That #67 Ford is still holding onto its fastest time from yesterday’s session, a 3:49.530. It was set by Harry Tincknell in the waning moments and could not be bettered by Tincknell, Andy Priaulx or Jonathon Bomarito in this session, so they drop down to a provisional third.

Another car making an improvement on its time was the #69 Ford GT. Richard Westbrook, Scott Dixon and Ryan Briscoe have now slotted themselves into eighth with a best time of 3:50.339 – a jump of two positions from where they ended yesterday’s running.

The pair of AF Corse Ferraris sit in 10th and 13th positions, with the #71 crew currently having the leg up on their teammates.

Still near the bottom of the GTE Pro sheets is the #89 Risi Ferrari of Pipo Derani, Olivier Jarvis, and Joules Gounon. Their best time is still the 3:52.997 from Derani, set yesterday. They were leapfrogged by three cars in the session which dropped them to 17th, last in class. GTE Am: No change at the front

The top two runners in GTE Am remain unchanged after this session. The #88 Dempsey-Proton Racing Porsche 911 still holds on to the top spot with a time of 3:52.454 from Matteo Cairoli. That time was unbeaten in the session.

Also holding onto its position is the #56 Project 1 Racing Porsche. Jorg Bergmeister’s time from Wednesday, a 3:52.750, remains good enough for second in class.

Also making strides forward was the #85 Keating Ford. After ending the first session last, it improved to sixth in class with a 3:53.492 being laid down by Jeroen Bleekemolen. The car did have a minor off with Ben Keating finding himself beached in the gravel at the first chicane, but there didn’t appear to be any damage.