Taking the non-hybrid honours was the #17 SMP, with the increasingly rapid Egor Orudzhev setting a 3:16.159 to go just over six tenths behind the leading Toyota. Next up was the #3 Rebellion, a further three tenths behind on a 3:16.404 set by Gustavo Menezes.

Stoffel Vandoorne pedaled the #11 SMP to a 3:16.665, but the big news of the session was a second engine failure for Rebellion, this time for the #1.

Approximately a quarter of the way through, it stopped on track at Arnage with Bruno Senna on board, smoking heavily and needing a flatbed truck to get it back to the pits.

Along with an issue at the second chicane for the #98 Aston Martin at the same time, this meant a red flag was called, which lasted for around 25 minutes. Before the failure, the car set a 3:16.810 with Andre Lotterer at the wheel to go sixth.

The #10 DragonSpeed got back on track after stopping in the first qualifying session, with Henrik Hedman completing his required five night laps before handing the car over to Ben Hanley and Renger van der Zande, in an attempt to better the 3:20.200 set in the first session, but there was nothing doing, with both drivers unable to improve.

Finally, the #4 ByKolles remained on Tom Dillmann’s 3:23.109 set in the previous session to round out the LMP1s. 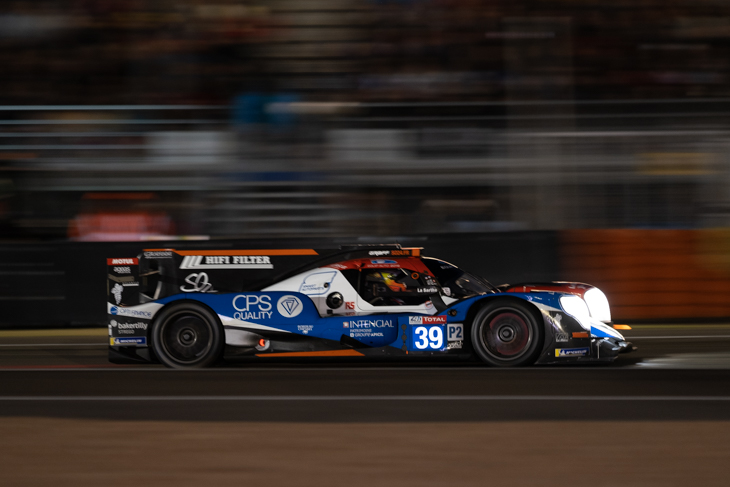 Nicolas Lapierre set a 3:25.874 for fourth in the #36 Signatech Alpine, while Paul Loup-Chatin took the #48 IDEC Sport to fifth with a 3:26.011, just under a second behind the polesitting Graff.

The #26 G-Drive Oreca went fifth with a 3:26.257, set by Formula E champion Jean-Eric Vergne, while the first non-Oreca followed him in sixth, the #22 United Autosports Ligier, in which Filipe Albuquerque achieved a 3:26.543.

Jackie Chan DC Racing’s #38 car didn’t improve from the previous session, where Stephane Richelmi set a 3:26.821 to get eighth. That showed just how much the LMP2 field had improved – in the previous session that time was good enough for second in class! 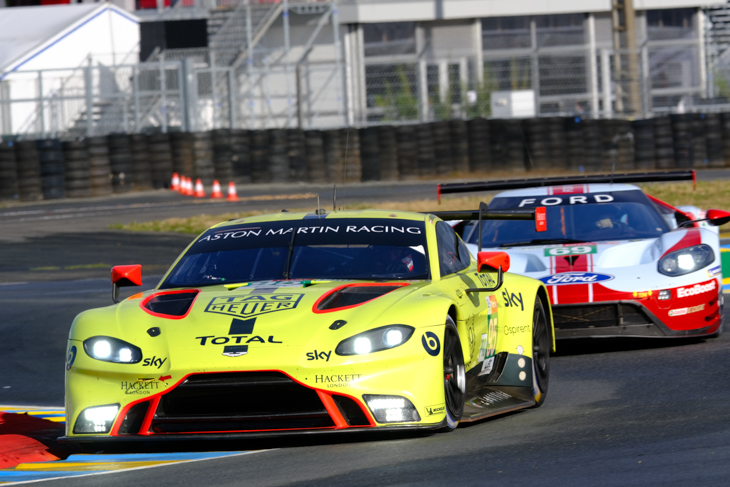 Just 12 months ago, Aston Martin Racing entered the 2018 Le Mans 24 Hours with its new Vantage GTE contender. The #95 Aston Martin qualified last in GTE Pro, bested only four GTE Am cars, and showed no pace during the race.

On Thursday, though, that #95 Aston Martin with Marco Sorensen, Darren Turner and Nicki Thiim on board qualified on pole for the 87th running of the great race.

The green flag dropped on the third and final qualifying session and a flurry of cars set down times that topped the charts. First, it was the #93 Porsche that held the top spot, then came the #67 Ford and then came Sorensen, who clocked in a 3:48.000 and gave Aston Martin pole.

“That was amazing,” said Thiim “That was unexpected a little, but what a surprise from last year to be on the top of the table. All credit to Marco [Sorensen] for this one and of course the boys, the car balance was spot on.”

“I’m looking forward to a great battle, it’s going to be super close, that’s what we all want,” Thiim added.

The #67 Ford GT, which had provisional pole after the first qualifying session, will roll off second. Harry Tincknell put in a 3:48.112, some 1.2 seconds quicker than his previous best lap time.

Antonio Garcia, the man who went quickest in the #63 Corvette last session, repeated his performance with a 3:48.830. That put Corvette, in its 20th Le Mans start, third on the gird.

Nick Tandy, also joining in on the optimum conditions at the start of the session, set a 3:48.907 in the #93 Porsche. That means Patrick Pilet, Earl Bamber and Tandy will start the race from fourth.

A surprising showing came from the #82 BMW M8. BMW has had a quiet event so far in the final race for the M8 and has not been able to challenge the top runners, but that changed in the final qualifying session. Augusto Farfus was given the controls for the first run of the session and he set a time of 3:49.108, good enough for fifth.

Sixth in GTE Pro was the #68 Ford GT. That was one of a number of cars that moved up the order in the final moments of the session, with a best time of 3:49.116.

Michael Christensen’s time of 3:49.196 in the #92 Porsche ensured that it’ll start the race in seventh. Just two-tenths of a second behind the #92 Porsche was the #71 AF Corse Ferrari of Davide Rigon, Sam Bird and Miguel Molina; they’ll start eighth.

With the strong showings from the #82 BMW and #63 Corvette, that ensured six different manufacturers will hold onto the first eight spots when the green flag flies on Saturday.

Elsewhere, the #81 BMW took a trip to the gravel at the Ford Chicane with Nicky Catsburg at the wheel early in the session. There was minor damage to the front end of the car and it ended the session with a best time of 3:51.353, 16th in class.

Still struggling for pace and still at the rear of the Pro field was the #82 Risi Competitizone Ferrari 488; its best time a 3:51.454 came in the final session. 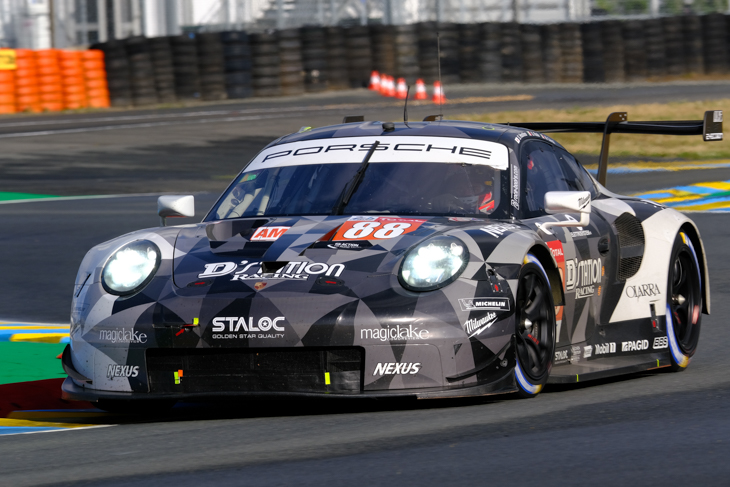 The #88 Dempsey-Proton Porsche once again proved hard to beat in GTE Am and a lap time of 3:51.439 from Matteo Cairoli was good enough to give himself, Satoshi Hoshino and Giorgio Roda pole position in the class.

Just behind the #88 Porsche was its sister car, the #77. That cars best came early in the session from Matt Campbell, who put down a 3:51.645 to make it an all Dempsey-Proton front row.

From a gearbox change to the top was the story of the day for the #86 Gulf Racing Porsche 911. After not leaving much of mark in the previous sessions, Thomas Preining, Ben Barker and Mike Wainwright secured an all-Porsche top three in GTE Am. Their final qualifying time was a 3:51.944.

Fourth in GTE Am and the best-placed Ferrari was the #84 JMW Motorsports car of Jeff Segal, Wei Lu and Rodrigo Baptista. Segal’s time, a 3:52.423, was just one second behind the pole time in the end.

Keating Motorsport’s Ford will start the race from ninth following a 3:53.492 that Jeroen Bleekemolen set in the second qualifying session. They did not improve in the final session and dropped down the order as a result.

The #98 Aston Martin of Pedro Lamy, Mathias Lauda and Paul Dalla Lana will start 11th. That car took a trip to the gravel in the second chicane and needed to be recovered. The car was undamaged and it appeared Lamy may have just carried too much speed into the corner on cold tyres.