Francois Kirman’s pole position held on only as long as Yann Ehrlacher, who had a great start from third on the grid in the #19 M Racing Norma M30, stole the LMP3 lead from the #3 DKR Engineering Norma through Dunlop and into the Esses.

Kirman briefly traded the lead, but Ehrlacher’s presence was too strong, setting consistently fastest sector times in extending the #19 Norma’s lead before the #9 Graff Racing Norma overcooked it on the exit of the Porsche curves, smacking the inside barrier and leaving the track strewn with polystyrene barrier debris to bring out the Safety Car.

James Littlejohn also had a strong first lap, up to third behind Matt Bell’s #22 United Autosports Ligier. The biggest loss of track position at the start was clearly Anthony Wells’ Nielsen Racing Norma, who had dropped outside the top 10 from a third-place grid position.

Pit stops under the Safety Car and driver swaps meant Duncan Tappy was now in the #25 Lanan Racing Norma and poised to pounce on Jim McGuire’s second-placed #22 United Autosports Ligier. Tappy made the pass look easy at the restart, Laurent Millara being Tappy’s next victim, making short work of the leader’s M Racing Norma M30 and soon extending a lead of 1.5 seconds.

Nicolas Schatz in the #39 Graff car had also made good use of the situation, clawing by the M Racing car for second place. Schatz stayed in touch with Tappy’s lead, pulling away from Marco Cencetti, now up to third, as the top five in LMP3 settled, finally, into a race rhythm

Then it went awry for Tappy as the #25 Norma was handed a drive-through for an unsafe release, the lead going to Nicolas Schatz for Graff. Tappy resumed fifth, overhauling Millara for fourth as the best result possible in the time remaining.

With time running out, Marco Cencetti sensed an opportunity, pushing on hard, aware of Noble’s Norma three seconds behind. But that’s how it stayed: Nicolas Schatz took the flag for Graff, the #39 Norma M30 Nissan four seconds ahead of the #5 DKR Engineering Norma, Colin Noble taking the third step of the podium for Nielsen Racing.

The Normas had the legs of the Ligiers on the long power-hungry sections, the best of the Ligiers being the #23 United Autosports JS P3 in sixth place. 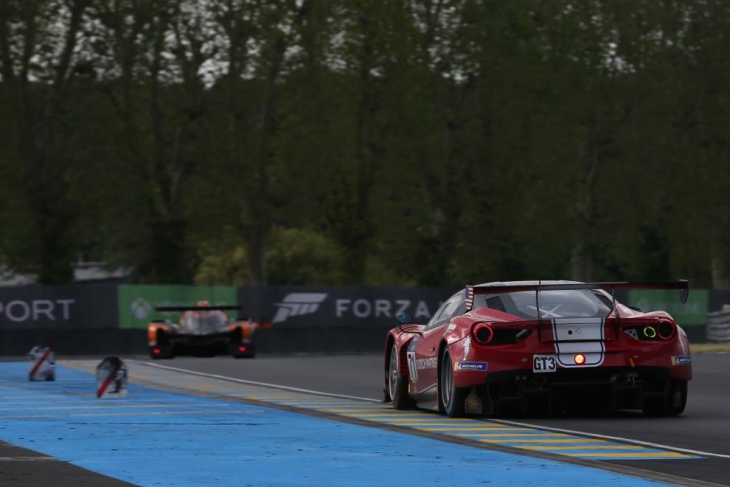 The #71 Luzich Racing Ferrari of Mac and Lavergne took the race one GT3 win thanks to three solid opening laps from Lavergne and a strong finish from Mac.

Lavergne made the best start and moved up to second in class, slashing the stack of P3 cars between him and the pole-sitting #99 Aston Martin of Ross Gunn from six to just one. The #97 TF Sport Aston Martin fell from second to fourth in the opening laps with Lavergne and also Tom Onslow-Cole (#40 SPS Mercedes) coming through.

Gunn opened the lead out, dipping into the 3:58s, but a heavy crash for the #9 P3 Graff Norma at Karting then brought out a Safety Car with only a third of the 55 minute race ran.

The next third of the race took place neutralised under the Safety Car whilst the debris was cleared up, so the entire field naturally pitted as one when the driver-change window opened. This therefore played into the hands of the teams who had elected to start with their weaker drivers.

Andrew Howard rejoined at the head of the class in the #99 Beechdean Aston Martin, but Mac had to recover from fourth place in #71.

The race resumed with 19 minutes left on the clock, Howard (#99) now with a 1.5-second lead over Pierburg (#40). Mac was the clear pace-setter, over six seconds faster than those ahead when the green flag waved. He moved up to take the lead with 12 minutes to go and was never challenged.

The seventh-placed #35 Mercedes (Zannutini) and #52 Spirit of Race Ferrari (Negri) made contact in the Ford Chicane, Negri’s car suffering race-ending damage and #35 dropping out of contention.

Coming into the final lap, Pierburg had brought his #40 Mercedes right onto the tail of Howard’s #99 Aston Martin and he took second place on the last lap, Howard in fact not reappearing, so the #51 Spirit of Race Ferrari inherited the final podium spot.

Kessel Racing’s Kaffer and Piccini made the most of the Safety Car to bring home their #82 and #8 Ferraris respectively in fourth and fifth. The #8 car could have challenged for the win in fact, but lost around 30 seconds in the pitstop, possibly trying to fix some damage to the front-right corner.