The full 2019/20 FIA World Endurance Championship entry list has been released today at the Circuit de la Sarthe, the day before the 87th running of the Le Mans 24 Hours.

All four classes are littered with quality entries, with GTE Pro the only one with a drop off in entries due to the departure of the Ford and BMW factory programmes.

In LMP1, there is a quartet of two-car entries: Rebellion Racing, Toyota and SMP Racing all return with their current machinery, joined by a pair of Team LNT Ginetta G60-LT-P1 AERs.

Absent here is ByKolles Racing – (who DSC believe did not apply), which is known to be trying to put together a Hypercar programme for 2020/21, and DragonSpeed, which will focus on its IndyCar effort.

As already revealed on DSC, DragonSpeed’s LMP2 effort is also absent here, in the 8-car LMP2 class which has a new look to it.

Only Signatech Alpine, Jackie Chan DC Racing and Racing Team Nederland Return (though the Jumbo-backed Dutch effort with a TDS run ORECA and not a Dallara).

Jota Sport, currently the force behind the Jackie Chan DC Racing effort add a car in their own name for the first time in the FIA WEC for the ex DragonSPeed LMP2 trio of Maldonado, Davidson and Gonzales.

Joining the returnees are four current ELMS teams – three with ORECA 07s: Cool Racing, High Class Racing and Cetilar Racing (which will switch from support via Villorba Corse to AF Corse) and United Autosports with a solo Ligier JS P217.

The High Class and United efforts are in addition to their current ELMS programmes.

Larbre Competition will not return and as will be seen below Francois Perrodo’s LMP2 programme is replaced by a return to GTE AM.

GTE Pro has taken the biggest hit, Ford and BMW’s departure leaves just six cars on the grid. Aston Martin Racing, AF Corse and Porsche GT Team are all back, with two cars apiece. No customer Fords are among this category, despite much work behind the scenes by Multimatic to get a programme off the ground in the run-up to the entry list deadline.  That prospect is not dead yet though!

Porsche though, will bring a pair of brand new 911 RSR 19s to the grid, the car an evolution of the hugely successful Le Mans and championship-winning 911 RS, due for a reveal later in the summer but with some details set to be revealed by Porsche later today.

The big headline story here is arguably the size of the Am class, which has seen growth yet again. 11 cars across three brands make it the biggest class in the field, with plenty of teams returning for more, joined by new efforts.

Team Project 1, gunning for the ‘Super Season’ Am title on the weekend at Le Mans, expands to a two-car effort. Dempsey Proton (two cars) and Gulf Racing (one car) also bring Porsches to the class.

TF Sport and Aston Martin Racing will both race with new Vantage AMRs, marking the end of the old Vantage’s time in the FIA WEC and in contemporary international motorsport.

The season begins with the FIA WEC Prologue at Barcelona (Spain) next month. 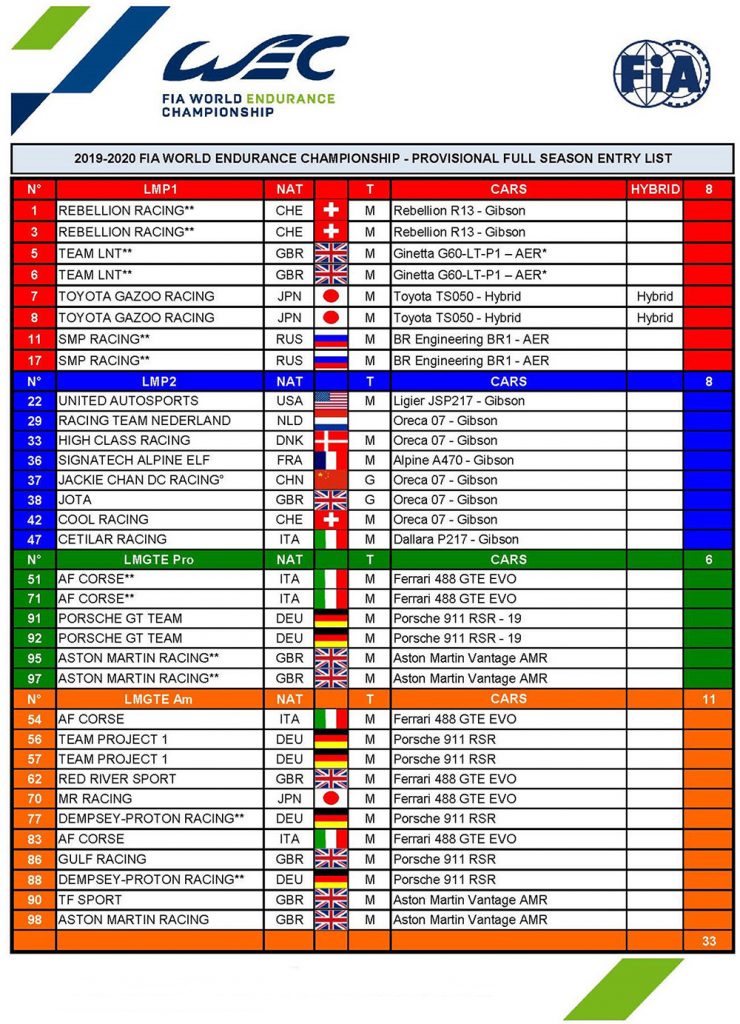