Second in LMP3 was the #25 Lanan Racing Norma of Duncan Tappy and Michael Benham, while Ross Gunn took second in GT3 in the #99 Beechdean Aston Martin, just 1.3 seconds behind Mac’s Ferrari.

In third was the #39 Graff Norma of Nicolas Schatz and Adrian Chila, while Tom Onslow-Cole rounded out the podium places in GT3 in the #40 SPS Mercedes.

At the first corner, Kirmann took the lead from polesitter Benham. However, Freddie Hunt in the #15 RLR M Sport Ligier took to the gravel at the Dunlop Curve, straight-lining the first chicane and causing a bit of chaos as he came back on track at speed, although somehow he survived without making any contact.

There was a bit of argy-bargy through the forest esses and up towards Tertre Rouge throughout the field, but there were no more major incidents. By the end of the first lap, Kirmann led the field, with Benham following through. The leading GT3 was the #8 Kessel Ferrari, with Italian driver Sergio Pianezzola fighting with Lavergne’s #71 Ferrari.

During the second lap, the #30 CD Sport Norma took second with Kevin Bole-Besancon looking feisty. At the start of the third lap, he took the lead, with Kirmann and Benham both taking to the grass at the exit of the forest esses, resulting in a drag race between the two towards the first chicane, with Benham’s Norma M30 eventually getting the better of Kirmann. They then had to slow due to a slow zone between the first and second chicanes.

Bole-Besancon had built a substantial gap to Benham since taking the lead a few laps before, almost 10 seconds to the good at the mandatory pitstops. Just a second behind Benham was Kirmann, who was maintaining a six-second gap to Hunt. In fifth and sixth were the Graff Normas, the #39 and Natan Bihel’s #72, with the cars swapping around at the first chicane as Bihel took fifth.

Both Benham and Kirmann pitted their Normas at the halfway mark, with Duncan Tappy climbing on board Lanan Racing’s #25 and Laurents Horr taking over the #3 DKR. A lap later, leader Bole-Bescacon pitted the #30 CD Sport Norma to hand the car over to bronze-rated Jacques Wolff. 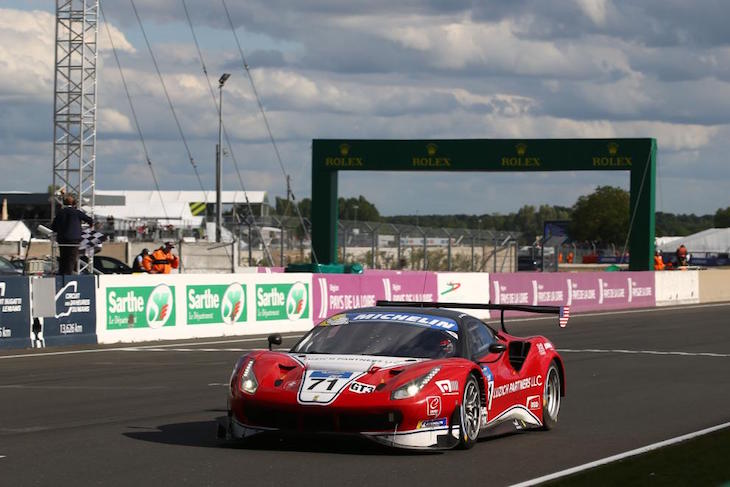 In GT3, the pitstops did not change the order, with Luzich Racing’s #71 Ferrari (above) still leading, now with Mikkel Mac at the wheel, followed by Tom Onslow Cole in the #40 SPS Mercedes and Giacomo Piccini in the #8 Kessel Ferrari.

At Indianapolis, Horr took second from Tappy in an incredible move on the outside of the banked corner. Silver-rated Horr and gold-rated Tappy were catching race leader Wolff, with the rapid Horr taking him on the Mulsanne before the first chicane. Tappy then took second from Wolff at the entry to the second chicane, making the rest of the race a battle between the #3 and #25 Normas.

Gunn in the #99 Beechdean Aston Martin, meanwhile, had taken third in GT3 from Piccini’s #8 Ferrari, while Onslow-Cole was hunting down Mac for the class lead, although a nine-second gap would be difficult to close, especially while being lapped by the leaders and themselves lapping other cars, including 63-year-old Jan Lammers in the Team Africa Bentley.

However, the former race-leading #30 CD Sport car had to pit to serve a six-second stop-and-go due to a sub-two-minute pitstop, meaning Wolff slipped to 12th, with the #39 Graff pedaled by Nicolas Schatz rising to third and the final podium position as a result.

A spin from Nick Adcock in the #60 CD Sport Norma at the first chicane, which resulted in Adcock stalling the car, meant a slow zone there while a snatch tractor recovered the stricken Norma.

Onslow-Cole straight lined the Dunlop Chicane with just six minutes to go, meaning Gunn took third and putting Onslow-Cole under pressure from Piccini in the #8 Ferrari. Gunn was on a charge, however, with just a few seconds between his #99 Aston Martin and the leading Kessel #71 Ferrari.

Overall leader Horr had built almost a four-second gap to Tappy in the laps since taking the lead, with Schatz in the #39 some 20 seconds behind the two fellow Normas. Although slightly slowed by traffic at the start of the final lap, losing a second or so to Tappy, he rebuilt the gap and due to Tappy also coming across traffic.

Horr took the chequered flag in the #3 DKR Norma with 4.8 seconds of a gap to Tappy. Schatz brought the #39 Graff home in third, 28 seconds behind Horr.

Although being caught by Gunn, Mac managed to hang on to the GT3 lead and took the win, with just 1.3 seconds’ gap over the #99 Aston Martin at the line. Third in GT3 was Onslow-Cole in the #40 SPS Mercedes, some six seconds further back.