The early morning of Sunday was kind to the Toyotas, which continued to dominate the race in the expected style. The #7 was establishing itself as the leader, however, having gained time on track through a safety car split. There were no longer the regular swaps of lead we had seen into the night. The #8 was having a recurring problem with keeping the door closed after pitstops, so had been losing a little time each pitstop.

By 9am, the lead for #7 was 102 seconds and it was still doing its pitstops after #8. This meant that it was unlikely even a safety-car period would close them up again, so the race appeared to be #7’s to lose as we entered the final quarter.

The early hours saw the end of the race for SMP’s #17 BR1. The car span backwards into the wall coming out of the Porsche Curves when being driven by Orudzhev. The ByKolles car was also retired.

The #3 was another loser of the morning, the impressive and remarkable fightback was dealt a severe blow in the form of a three-minute stop-go penalty for a breach of a regulation relating to tyre allocation/identification which, as we understand it, was the failure to use a ‘scrubbed’ set of a particular compound. The tyres are identified by an RFID system at pit exit.

The penalty put this car under attack by the #11 SMP BR1, which took the place shortly after 8am. Rebellion’s problems were then further exacerbated when Menezes span to the inside at the quick left-hand part of Porsche Curves and had to be recovered out of the gravel. This gave SMP a three-lap advantage over Rebellion’s #3, so if there are no further problems, the final overall podium spot belongs to the Russian team. 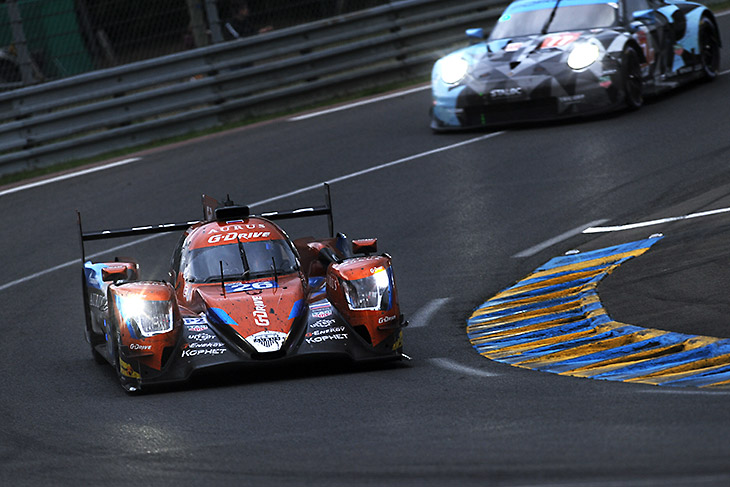 There was a shake-up at the front of P2 as well. G-Drive and Signatech maintained their metronomic domination in first and second place, but Maldonado was involved in a race-ending crash for the title hopefuls (but outsiders) #31 Dragonspeed Oreca at Tertre Rouge. Indeed, the title protagonists were reduced from four to just two when the Jackie Chan DC Racing #37 Oreca was retired with gearbox problems.

The #38 sister car also had what appeared to be a slow front-left puncture just before 8:30am, losing around four minutes (but no positions) as it was carefully brought back to the pits by Gabriel Aubry, weighing the championship odds heavily in Signatech’s failure.

The #22 United Autosport car had a pitstop of 2:30 with a door that wasn’t closing properly, which assisted #32 to move ahead of it, only for #32 to suffer an alternator problem and then a puncture causing bodywork damage.

TDS established themselves in fourth place and 9am they were within striking distance of a podium, Perrodo completing a morning stint that left them in a much healthier position than his first.

ARC Bratislava were forced to retire their Ligier after extensive damage caused by two separate accidents (seemingly linked to the same steering problem) on the same lap.

Duqueine Engineering had climbed into the top ten through the darkness after a very early puncture put them well down and with the problems for others and strong pace from their Oreca they sat fifth, a couple of laps off being able to challenge for a podium and just ahead of the #22 United Autosports Ligier. IDEC Sport and Panis-Barthez were next up, but had already lost too many laps to be contenders. 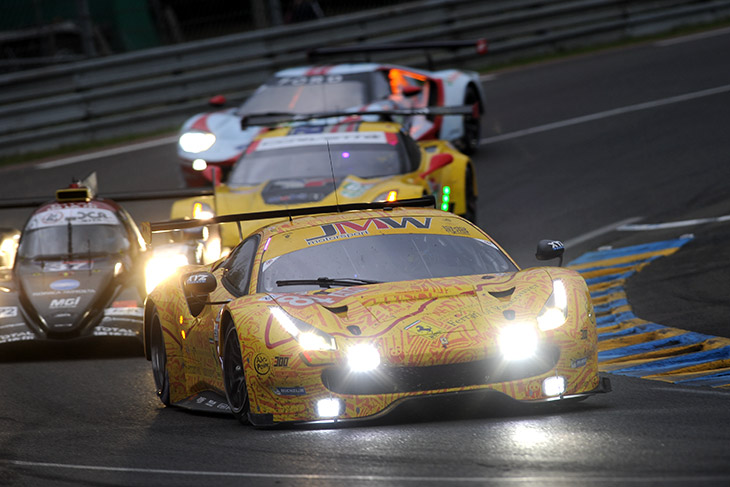 Its sister car the #71 Ferrari having been retired, AF Corse’s #51 Ferrari still held the lead of an intensely contested GTE Pro battle overnight. This positioned had ebbed and flowed between the Ferrari’s crew of Alessandro Pier Guidi, James Calado and Daniel Serra, and the #92 and #93 Porsche crews, with the #63 Corvette taking its turn at the front as pit stops cycled through in a
four-way contest, the Corvette’s crew reporting the car to be in great shape.

With the #92 Porsche falling foul of an exhaust replacement, this left the #93 Brumos-liveried ‘Core’ car as the leading Porsche challenger in the hands of Patrick Pilet, Nick Tandy and Earl Bamber, chased down hard by the #91 ‘Manthey’ entry of Lietz, Bruni and Makowiecki, all three drivers pushing hard to elevate the car from its lower positions earlier on and executing good calls under
caution periods.

Indeed, safety-car periods offered options for creativity but the strategy had to be to simply hang in the fight, such was the closeness of competition and therefore the risk of coming unstuck. The top 10 cars had remained on the same lap for most of the last nine hours. The #92 Porsche was outside the top 10, and despite having led the championship all season, it could lose it at this final race should the #91 car win.

The midnight hour was a terrible one for Aston Martin, with Alex Lynn seemingly unsettled in the #97 at the Porsche Curves as a prototype overtook, hitting the wall to driver’s right and necessitating suspension and rear-wing repairs. Moments later something appeared to break at the rear left of the #95 Vantage at Indianapolis, pitching Sorensen into a hard sideways impact with the tyre wall to driver’s left, putting the car out on the spot.

The #97 sister car had not found any huge benefit overnight in its tyres and setup in any case, and though its lap times were now respectable, too much earlier time had been lost. Last in GTE Pro, 15 laps adrift, a finish would be meagre reward for the promise shown earlier in the week.

Risi Competizione wanted a top-10 class finish and were grinding away, Oliver Jarvis and Pipo Derani hanging in there with the bulk of the work overnight and rising to GTE Pro’s ninth spot despite the #89 Ferrari’s tyres going off too quickly in their second stints.

The BMWs sat 12th and 13th in class approaching the halfway mark. Still circulating but struggling with suspension issues and having to stay clear of the kerbs, they had no chance of competitive times. The directive has been issued to bring both cars home and finish their final (for now at least) Le Mans.

GTE Am had seen the cycling of the lead seven contenders, but Keating Motorsports’ ‘fan-favourite’ Ford GT made sterling efforts, the #85 emerging as a strong leader before midnight. Ben Keating had finally got aboard for some serious miles and despite a scary moment in the gravel as daylight broke, he maintained a lead of nearly three minutes over the Team Project 1 Porsche and the JMW Ferrari, which had been in the mix since Saturday evening.

This was helped by the expiry of the so-far-untroubled Aston Martin of TF Sport. Having run third, Euan Hankey was spinning his wheels in the gravel at Mulsanne Corner trying to avoid intervention but forced a slow zone in his extraction. Recovered to its pit, the #90 Aston that had been upholding the reputation of the marque was retired with power-steering failure.

The remaining #77 Dempsey-Proton Am Porsche made an extended stop to change front bodywork and undertray following, a ‘recommended’ move set earlier by the Pro Porsches, the Porsche had nevertheless dropped out of contention, now placed sixth.