Celebrating 70 years since Ferrari’s first appearance, and proving that the biggest budgets don’t always win Le Mans, AF Corse took a well-deserved victory at this year’s edition of the 24 Hours with its Ferrari 488 GTE in a thrilling exchange between closely matched GTE Pro machinery.

This had been the greatest showing in recent years of factory-supported GTE cars, the carefully calculated Balance of Performance delivering an exciting race – even though some teams would have reason to feel disappointed. 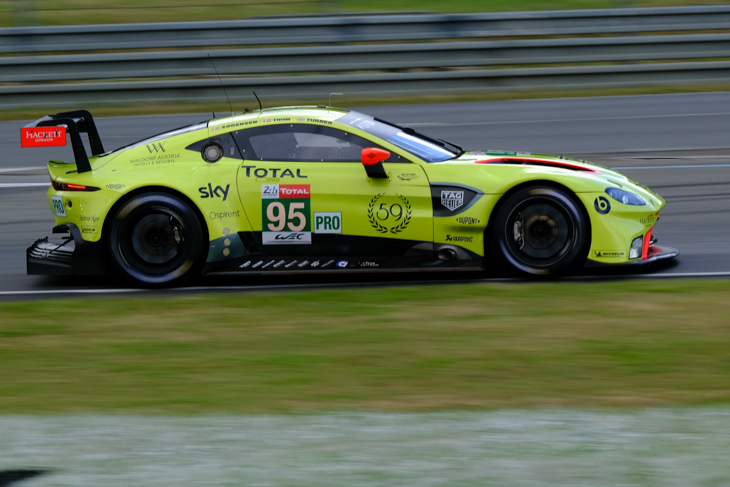 With the potential pace of the pole-sitting #95 Aston Martin Vantage (above) being neutralised by a pre-race performance adjustment, Nicki Thiim’s defence on the opening laps was brave but short-lived. A reduction in turbo boost combined with difficult tyre choices had put the British team on the back foot after a very convincing qualifying performance. Combined with accident damage for both cars, a retirement and a final place in class would be poor reward for its two-car effort. 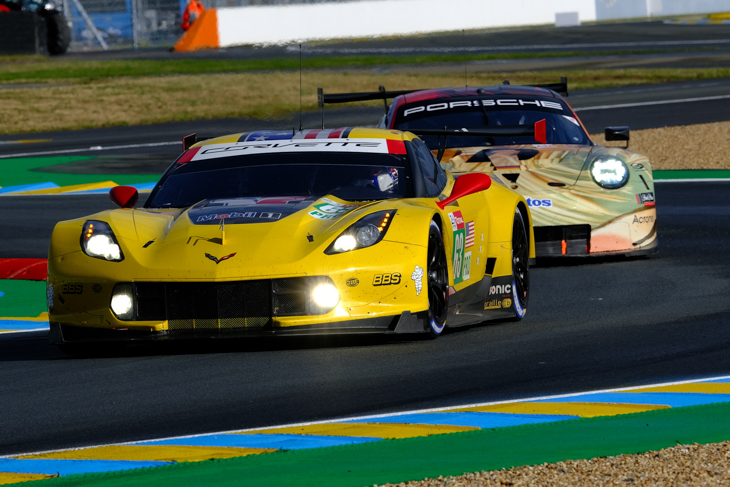 This released a highly charged race at the front between the #63 Corvette of Jan Magnussen, Antonio Garcia and Mike Rockenfeller (above) and the #51 Ferrari that would last well into the final quarter of the 24 hours, with Garcia a particular star in the Corvette. The car showed real pace and presence at the head of the field early on and became the sole Corvette in the race after its #64 sister suffered a high-speed impact at the Porsche Curves. 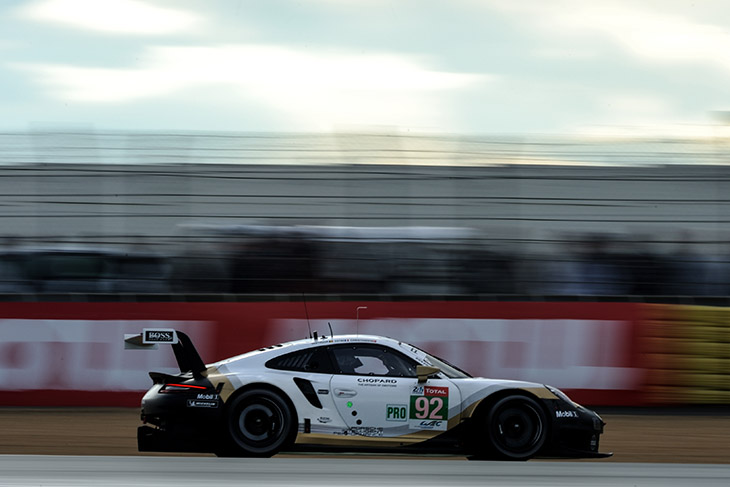 Although the team admitted its cars were not quite where they wanted to be, Porsche was on a mission. All four factory 911 RSRs featuring in the hunt for the lead, at blistering pace the #92 (above) of Michael Christensen, Kevin Estre and Laurens Vanthoor and the #93 car in the hands of Patrick Pilet, Nick Tandy and Earl Bamber spearheaded the first attack, trying very hard to pressure mistakes ahead.

The #91 entry of Richard Lietz, Gianmaria Bruni and Frederic Makowiecki and the #94 car of Dennis Olsen, Sven Muller and Matthieu Jaminet rose up through the field in support from further back. All bar the #94 Porsche seemed to be on a charge, up and down the top six as pitstops cycled throughout the evening and into the night.

Indeed, Porsche looked to be applying force that would be too hard to resist, but the #51 Ferrari and the #63 Corvette dug in hard, Calado’s pace in the Ferrari at the front really keeping the Porsches at bay during the night. With a cracked exhaust dropping the #92 car out of contention just before dawn, GTE drivers’ championship leaders Christensen and Estre had to hang in to finish 10th, securing their world title, while the #91 and #93 cars fought on for Porsche’s Le Mans honour.

Shorter intermissions through full-course yellow procedures adopted by race control seemed to have worked well in neutralising the field throughout this race, the general pace and order not spoiled by lengthy safety-car periods, as had been the case in GTE Pro last year. But an accident for the Racing Team Nederland LMP2 Dallara threw the race out of balance in the 21st hour, as the out-of-sequence, potentially race-winning #63 Corvette was held at the pit exit having completed a routine pit stop.

On a different fuel strategy to the rest of the GTE Pro front runners, the give-and-take nature of the system swung away from the Corvette at a crucial moment. Magnussen’s spin on cold tyres at the Porsche Curves curtailed Corvette’s 20th appearance at the Le Mans 24 hours, which had shown precision and a strong sense of victory from the very start of the race. The car would take the flag in ninth place.

The rate of attrition in this year’s race was reminiscent of previous ‘classic’ editions with cars and drivers starting to feel the strain.

“This may have decided GTE Pro now. The four cars at the top have been split across three safety cars, the Ferrari has been given a big advantage. Sometimes the safety cars give, sometimes they take. It’s a pity because the race was so close after an excellent battle for 20 hours. But maybe another will come? We will see!” said Dr. Frank-Steffen Walliser, the former Porsche GT boss, talking about the safety car. It was easy to forget how a safety car lined up a Porsche victory this time last year… 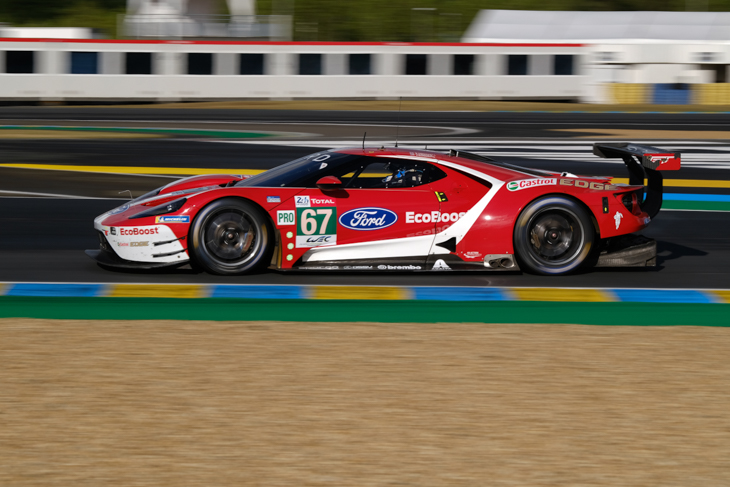 The Ford Chip Ganassi Team arrived at its last Le Mans appearance for the Blue Oval (in this iteration at least) with a strong four-car entry that promised much. Harry Tincknell, Andy Priaulx and Jonathan Bomarito’s #67 (above) was a star in qualifying and fought hard in the opening laps, but the sheer pace of the #92 and #93 Porsches drove the Ganassi team to withdraw from the arms race for the lead in a bid to stay out of trouble.

Chip Ganassi had stated: “We have four bullets in the gun and we’re going to use every one of them.” The bullets stayed loaded, however, the four Ford GTs grouping ominously towards the Sunday morning hours; on the pace, but not in any real position to threaten unless the race fell apart for someone ahead. A formation finish looked good, but not for the first time the Fords showed well, but not well enough… in this class at least.

BMW Team MTEK finished its 2018-19 WEC campaign at Le Mans with 11th and 14th positions in GTE Pro for its pair of M8 GTEs. Neither of its cars could match the pace towards the front and suspension problems dogged the team. Getting both cars to the line looked like hard work for their crews, who bow out of the FIA championship quietly. 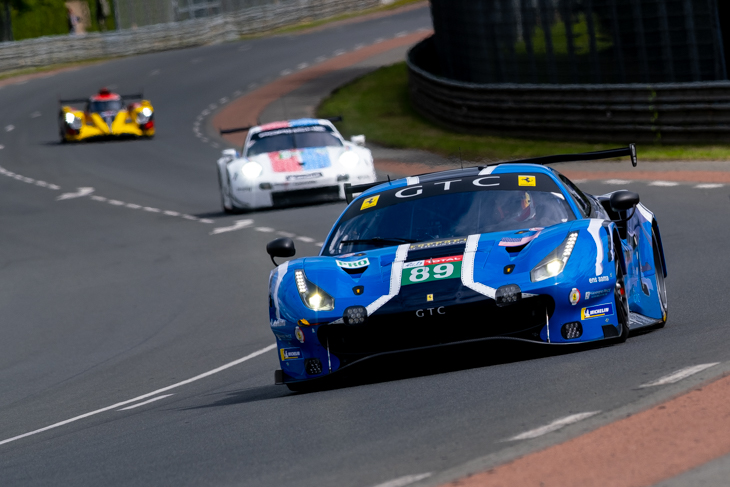 The first win here then for the Prancing Horse since 2014, when Risi Competizione brought home the 458 GTE. Risi was here again with its unusually blue liveried 488 GTE (above) as the category’s sole privateer. Although the team didn’t get the Top 10 finish it wanted, Oliver Jarvis, Pipo Derani and Jules Gounon had overcome setup and tyre issues to deliver a hard-earned finish.

AF Corse’s victory celebration for Ferrari was wonderfully emotional and great to witness. Taking its total number of class wins here to three, this was the first win for Calado and Pier Guidi, Daniel Serra’s second (having won with Aston in 2017), as well as the first for the 488 GTE at Le Mans.