In GT4, it’s a fourth pole of the season for Sebastian Priaulx and Scott Maxwell in the #15 Multimatic Mustang.

Davidson set the fastest individual time of all the drivers in the first portion of qualifying (a 1:27.810, just 0.082 seconds up on Silver-rated Ollie Wilkinson) and this, combined with Adam’s 1:26.982 in the second part of qualifying, was enough to put the #47 Aston on pole, with the grid determined by combined times.

“It’s great to be on pole here, there’s been a lot of pressure coming into this one,” said Davidson after the session. This is the first time I’ve qualified top of my session in British GT, so that’s nice. I just want to go out and win now; Silverstone was a tough pill to swallow, but these things happen and you’ve just got to keep trying.”

Joining the Aston on the front row is the WPI Motorsport-run Lamborghini of Dennis Lind and Michael Igoe, fresh from their Silverstone 500 podium finish. Igoe set a 1:28.390 in the first part of qualifying, backed up by Lamborghini factory driver Lind’s 1:26.753 in the Pro session to secure the place.

The second row is made up of the #22 Balfe Motorsport McLaren of Shaun Balfe and Rob Bell, plus the championship-leading #72 Barwell Lamborghini of Adam Balon and Phil Keen in fourth.

Qualifying fifth and sixth are the #69 Cocker/de Haan Barwell Lamborghini and the #99 Beechdean Aston, with Andrew Howard joined this weekend by Ross Gunn in place of the injured Marco Sorensen.

Two more Astons fill places seven and eight: the #96 Optimum car of Wilkinson/Ellis and the #2 TF Sport machine of Mark Farmer and Nicki Thiim. The #3 Paul/Green car was the highest qualifying of the two Century BMWs in ninth, with the top 10 rounded out by the #31 JRM Bentley crew of Rick Parfitt and Seb Morris.

Silverstone 500 winners Ian Loggie and Calum Macleod didn’t set a combined time following an off for Macleod in the Pro part of qualifying and so will start last of the GT3s on Sunday, while the JMH Lamborghini of Jamie Stanley and John Seale has been withdrawn from the meeting, due to the latter driver being unavailable to race. 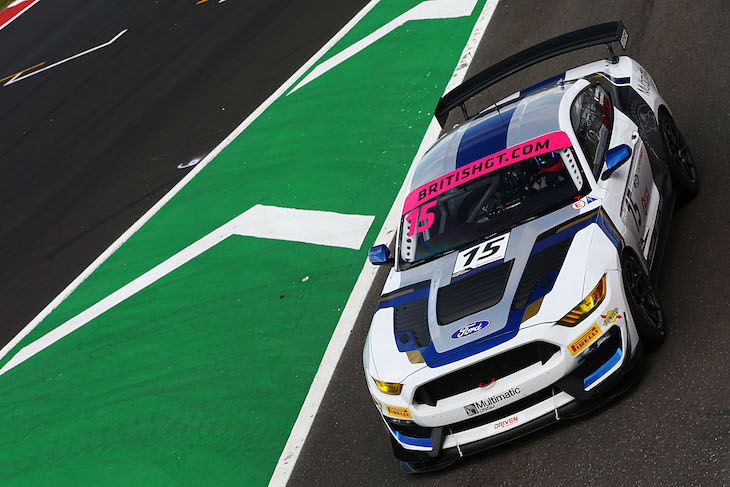 The combination of a 1:35.519 from Seb Priaulx in the first session and a 1:35.117 from Scott Maxwell in the second secured the Anglo-Canadian duo their fourth 2019 pole position in British GT.

They finished a combined two-tenths of a second ahead of their closest rivals, James Dorlin and Josh Smith in the #4 Tolman Motorsport McLaren.

In third was another McLaren, the overall GT4 championship-leading #57 MacDonald/Pointon HHC McLaren, ahead of the #42 Century BMW of Mark Kimber and Jacob Mathiassen.

Silverstone 500 winners Nick Jones and Scott Malvern put the #66 Team Parker Mercedes fifth on the grid for Sunday’s race, ahead of GT4 Pro-Am championship leaders Kelvin Fletcher and Martin Plowman in the #11 Beechdean Aston in sixth.

Fletcher in particular impressed in the first part of qualifying, getting up among the Silver-rated drivers with the fifth-fastest individual lap time, a 1:35.841, just six-tenths off Plowman’s effort in the second segment.

Seventh and eight-place qualifiers in GT4 were the #5 Collard/Proctor Tolman McLaren and the #43 Gordon-Colebrooke/Fender Century BMW M4.