For British GT, Donington Park has long been associated with a combination of the excitement of title-deciding season finales and the sometimes-grim late-September weather. The decision to replace the now-defunct Rockingham with a second visit to the Leicestershire venue in mid-June has paid off so far, with both free-practice sessions taking place in fine sunshine.

There are no additional cars to the GT3 contingent that contested the Silverstone 500 three-hour race a few weeks ago, and despite a disappointing showing there, the two Barwell Lamborghini driver crews continue to lead the championship, with Balon and Keen on 89 points to de Haan and Cocker’s 73. 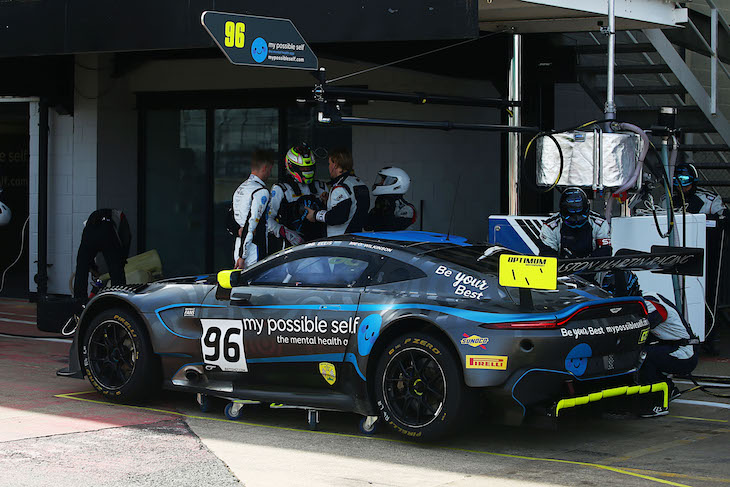 Third place overall in the standings is the Silver-Silver pairing of Bradley Ellis and Ollie Wilkinson in the #96 Optimum Motorsport Aston Martin (above). Speaking to DSC during FP2, Ellis admitted the duo hadn’t expected to be in this position half-way through the season.

“We thought we’d struggle with the extra weight Silver Cup cars have to carry, but consistency has paid off for us,” he said. “We’ve not yet had a really bad round, we’ve always been there or thereabouts. At Oulton and Snetterton we were in podium contention, we got it at Oulton, but had the penalty at Snetterton. Overall, we’ve always been able to get close to the podium and score points.

“There’s a lot more to come out of Ollie for sure; that’s my challenge. It’s still early days, but now he’s on the AMR Young Driver programme, he’s coming on in leaps and bounds. In the future we’ll see a lot more out of him; his outright pace isn’t far away, but we’re still trying to build up knowledge in him about the sport as a whole. Once he gets that, I think we’re looking at a very fast young driver.

“We’re both loving the new Aston, it’s really user-friendly,” the 2007 GT3 champion continued. “We’re still trying to get on top of setup and stuff like that, trying to learn it, but always making progress, which is good. The old GT3 had a lot of mechanical grip and power, our power isn’t too bad, but we’re heavily restricted on boost.

“The Silver Cup weight penalty isn’t a crazy amount, but especially in the longer races, it hurts our tyres and brakes. I’d rather not have anything, in theory, a gold-bronze pairing should equal a silver-silver crew, and there are no weight penalties for Silver Cup or Pro-Am cars in Blancpain. It does make it hard to race cars; you lose a little out of the corners, so you always feel like you’re on the back foot trying to make an overtake.

“It does make it hard to pass, you feel like you have to take more risks than you’d like and it’s harder to show your outright pace. I don’t think it would prevent a Silver Cup car from taking an outright win if everything falls into place, but it definitely restricts one from winning the championship outright, I think.” 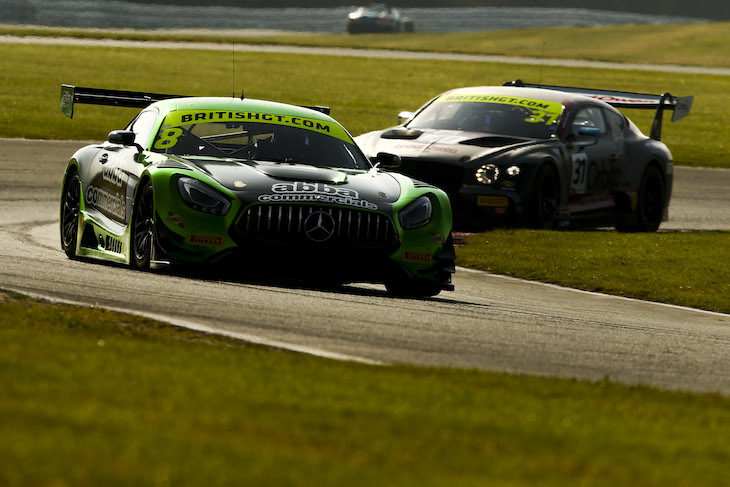 Two GT3 cars have substitute pro drivers this weekend, with Ross Gunn taking over in the #99 Beechdean Aston as a result of Marco Sorensen’s Le Mans injury and Tom Onslow-Cole sharing the #8 Team Abba Racing Mercedes with Richard Neary, due to Adam Christodoulou being on duty at the Nurburgring 24 Hours.

Onslow-Cole admitted to missing being at the Nordschleife, where he finished second in class at last year’s 24 Hours, but declared British GT Donington ‘a close second’. “It’s nice to be back at Donington; I haven’t driven here for a good few years, and even when I did touring cars, we never used the loop, at least it’s not too complicated!”

“I’ve jumped straight into the car and it’s going okay, it’s crazy how different all the Mercedes are to drive, nothing to do with the car itself, but just that everyone has their own idea or package of the best way to drive it, so took a couple of laps to dial into that. The important part in British GT is getting your Bronze fast, so Richard [Neary] is getting plenty of laps; we’re running on old tyres and tuning the race setup.

“With these two-hour races, there’s a lot of scope for limiting mistakes and time lost in traffic, that’s key in this championship. There’s a lot of quick drivers, but on these tight British circuits, there can be incidents and issues; we’re looking for a clean race.” 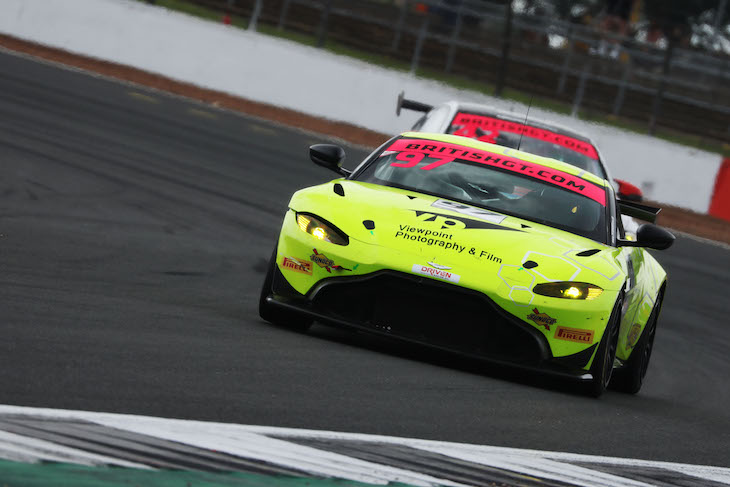 Over at TF Sport, DSC spoke to Ash Hand, one half of the GT4 Silver Cup winning crew at Silverstone in the #97 Aston Martin. “It’s going really well so far this year,” he told us. “We started the season in the position of me having been out of the seat for a long time. Tom [Canning] has raced GT4s over the past seasons and he’s very good, so it’s great being alongside him.”

Hand was previously best known for Clio Cup exploits, so how has he found the transition to a more powerful and rear-wheel-drive machinery? “It’s not necessarily the change from front-wheel drive that’s been tricky, it’s the extra weight,” he explained. “That’s been the biggest thing to get my head around.

“Now we’re at the mid-point of the season, I’ve got back into the swing of things. We ran well in testing, got the class win at the last race and were second overall in GT4 earlier in the season, so the results are coming. Going into this weekend, we’re 12.5 points off the championship lead, so our plan is to come away with a win and topping the standings. It’s just about executing that as well as we can.

“At Donington, we’ve been as fast as we need to be in free practice for pretty much the first time all year, normally it has come later. The car’s going really well, TF has a great success record here, so I can’t complain!”

Elsewhere in GT4, changes to the driver line-up include Sir Chris Hoy slotting into the #19 Multimatic Mustang alongside Billy Johnson, plus a second Track Focused-run KTM X-Bow for Alexander and Ross McEwen, joining the season-long #32 entry of Mike McCollum and Sean Cooper.