GT3: Victory at last for Davidson and Adam

Graham Davidson and Johnny Adam executed a near-perfect race at Donington Park to win the two-hour British GT encounter and put the disappointment of their last-minute retirement from the Silverstone 500 a fortnight ago to rest.

An excellent start by Davidson from pole position and rapid progress through the opening corners ensured the #47 TF Sport Aston Martin was untroubled in the early laps, as the rest of the GT3 field held each other up with some close battling.

After the first lap, second-place starter Michael Igoe (WPI Lamborghini) had held his starting position, with Shaun Balfe (Balfe McLaren) gaining a place off the grid to sit third. Andrew Howard made a good start to to get the Beechdean Aston up two places to fourth, while Ollie Wilkinson made similar progress in the Optimum Aston to sit fifth.

Both Sam de Haan (#69) and Adam Balon (#72) lost positions at the start in their Barwell Lamborghinis and were running sixth and seventh the first time the field came around, ahead of Dominic Paul in the #3 Century BMW.

Attempting rise from the back of the grid after co-driver Calum Macleod’s qualifying error, Silverstone 500 winner Ian Loggie tapped JM Littman in the other Century BMW into a spin at the Goddards hairpin, resulting in Littman dropping down the order and Loggie being hit with a 10-second stop-go penalty.

There were also spins for Balon at Melbourne, and Glynn Geddie in the #7 Team Parker Racing Bentley. The latter was subsequently given a drive-through penalty for track-limits infringements.

Up front, both Balfe and Wilkinson found a way past Igoe to sit second and third as the first hour unfolded, so the order before the stops was Davidson in the lead in the #47 Aston, four seconds up the road from Balfe’s McLaren, with Wilkinson a further 11 seconds behind in the #96 Aston.

Unfortunately, the #96 car’s race ended in the pitlane shortly afterwards, when it dramatically caught fire as Wilkinson’s co-driver Bradley Ellis was pulling away to begin his stint. Ellis had to pull in at the end of the pitlane, where marshals managed to extinguish the blaze and get the driver out safely. 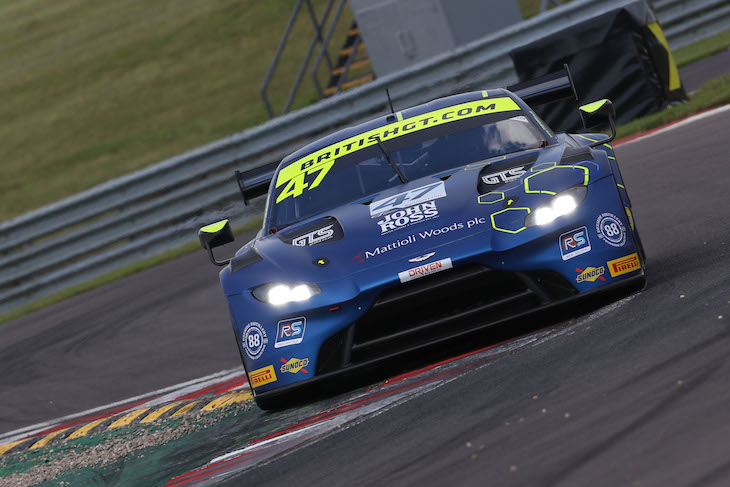 Following less dramatic pitstops for everyone else, Adam in the #47 (above) led after the driver changes, pursued very closely by Rob Bell in the Balfe McLaren. A yawning gap to third-place Jonny Cocker in the #69 Lamborghini suggested it would be between those two for the race win, and so it proved.

Dennis Lind had joined in fourth place having taken over the WPI Lamborghini from Igoe, while Seb Morris was fifth in the #31 JRM Bentley; Pariftt had run sixth in the early stages and the demise of the #96 gained them a place.

Balon’s spin in the first stint left Phil Keen down in sixth in the #72 Lamborghini, ahead of Ben Green in the #3 Century BMW and Ross Gunn in the #99 Aston – Andrew Howard having lost several places during his stint after his early rise to fourth. 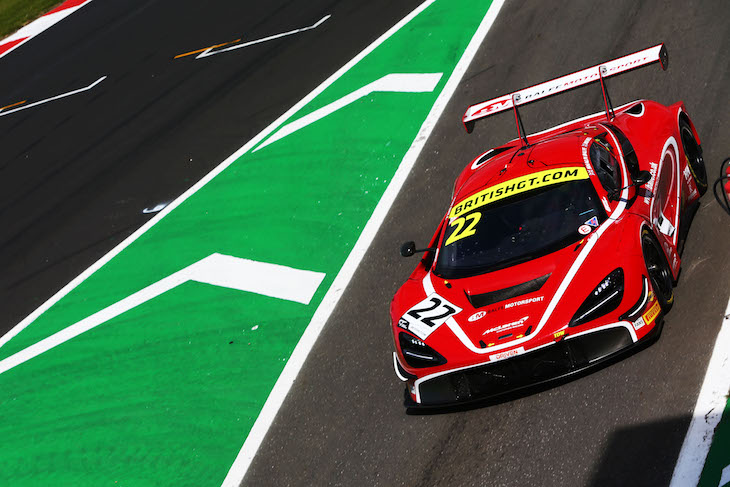 Up front, an interesting situation developed as Nicki Thiim in the #2 TF Sport Aston, on a recovery charge after a poor first stint for Mark Farmer, unlapped himself past Bell (above) and then proceeded to hold station behind Adam. Bell had been keeping in touch with, rather than aggressively attacking, Adam, but nonetheless, Thiim’s presence served to neutralise the battle for much of the closing hour of the race.

Adam then ran slightly wide, allowing Thiim to unlap himself past the sister car, but some busy GT4 traffic prevented a last-minute attack by Bell, and so the #47 Aston crossed the line 3.4 seconds ahead of the #22 McLaren in the end.

Cocker held on for third in the #69 Lamborghini and Lind survived a grassy moment in the closing stages to cross the line fourth in the WPI car. Phil Keen in the #72 Lamborghini and Ross Gunn in the #99 Aston both found a way past Morris’ Bentley in the course of the second hour, with Ben Green winding up ninth and Thiim rounding out the top nine and the Ram Mercedes 10th. 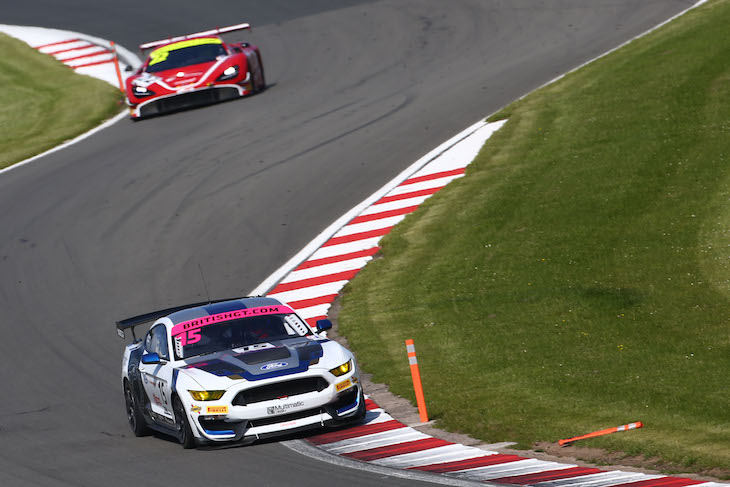 With the #15 of Scott Maxwell and Seb Priaulx topping every practice and qualifying session before winning the GT4 race overall and the #19 of Sir Chris Hoy and Billy Johnson triumphing in the Pro-Am class, the Donington weekend could not have gone better for the Multimatic Motorsport Mustangs.

But the opposite was true for the #4 Tolman Motorsport McLaren line-up of James Dorlin and Josh Smith, who were once again on course for victory only to hit trouble. This time, instead of a mechanical issue, it was contact with a GT3 car (reported to be the #69 Lamborghini of Sam de Haan) that ended their race.

Smith had overhauled Maxwell’s polesitting Mustang at the start, taking Callum Pointon in the #57 HHC car with him to make it a McLaren 1-2 in the opening laps. Maxwell soon got his head down, however, and had overhauled Pointon and got back on the tail of Smith by lap 19. 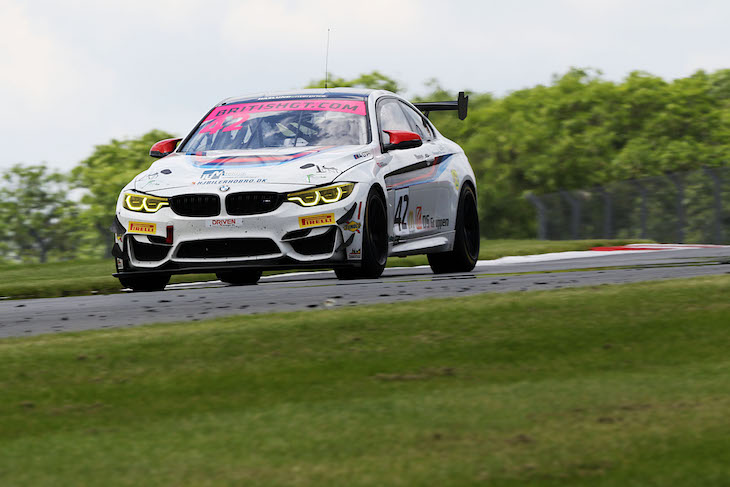 He inherited the lead when the Toleman car retired, but almost as soon lost it again as an on-form Jacob Mathiassen in the #42 Century Motorsport BMW (above), who’d started from fourth and already passed Pointon, worked his way past the Mustang. Maxwell repassed again a short time later, but the battle was well and truly joined between these two cars for the GT4 victory with over an hour of the race still to go.

Further back, Pointon lost another place to a charging Sennan Fielding in the #29 Steller Audi, who’d clawed his way up from a grid slot of 15th in a fighting opening stint. Kelvin Fletcher, meanwhile, held the Pro-Am lead and fifth in GT4 overall as the driver-change window loomed.

After the stops, Mark Kimber took over the #42 and got out ahead of Priaulx, now at the wheel of the #15. Callum Pointon yielded the #57 McLaren to Dean MacDonald, who exited the pits in third, while Jordan Collard ran fourth in the #5 Toleman McLaren started by Lewis Proctor and Richard Williamson was fifth in the Steller Audi.

The make-up of the top finishing positions changed dramatically in the closing stages, though. First, Priaulx slipped past Kimber for the lead at the Melbourne hairpin. Then, Kimber was cruelly forced into retirement after an exploding brake disc spat the Century BMW off the track and into the barriers. 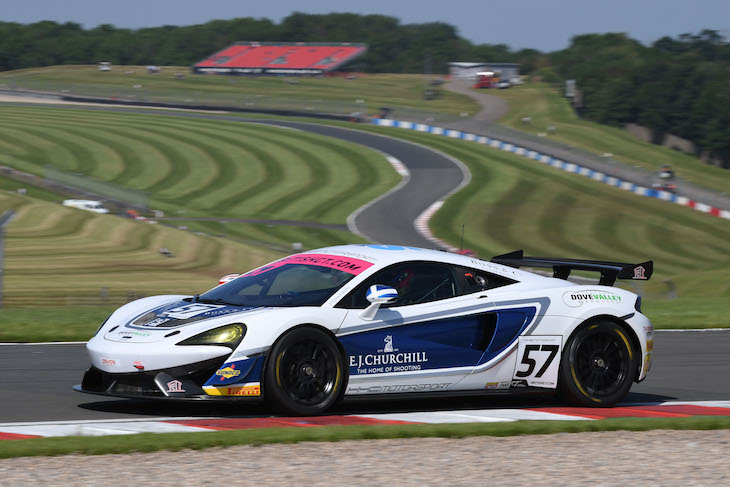 That promoted the #57 MacDonald-driven McLaren (above) to second and the #5 Collard-driven McLaren to third. Williamson looked set to finish fourth in the Steller Audi until that car slowed dramatically on the penultimate lap with an apparent mechanical issue.

Billy Johnson thus finished fourth overall rather than fifth in the #19 Multimatic Mustang, but more significant was the fact that he’d emerged on top in an on-track battle with Fletcher’s co-driver Martin Plowman for Pro-Am class victory – a significant achievement for Johnson and Chris Hoy on the first of their two ‘guest appearances’.

Elsewhere, Silverstone 500 class winners Nick Jones and Scott Malvern in the #66 Mercedes ended up only being classified finishers by the skin of their teeth after an unfortunate series of events. Jones tapped the rear of Lewis Proctor’s McLaren under braking, at which point the air-jack input pierced the Mercedes’ radiator, causing the engine to overheat.

That put paid to any chance of decent result, however the team patched the car up and sent Scott Malvern back out; he finished just a fraction of a lap within the 70% of the winner’s race distance required to be a classified finisher, and therefore took a small handful of Pro-Am championship points for his efforts.