Last weekend the Blancpain GT World Challenge Asia field headed to Japan for a pair of races on the Suzuka circuit. Across the two sprints, Absolute Racing scored a 1-2 finish and Craft Bamboo took a win for Mercedes.

The points battles in the classes are now taking shape, with just three race meetings left in the season, would the results from last weekend prove to be pivotal in deciding this year’s champions?

Porsche sweeps the podium in Race 1 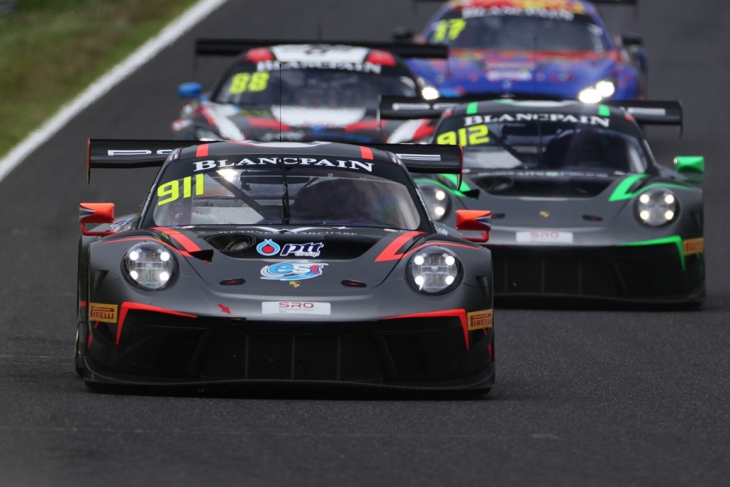 The Thai-German duo crossed the line 6.2s ahead of team-mates Yuan Bo and Leo Ye Hongli, who held off Yuta Kamimura over the closing laps. The ARN Racing Porsche he shares with Hiroaki Nagai scored its best-ever championship result after coming through from ninth on the grid.

Porsche’s half of the Absolute Racing garage celebrated a one-two finish on Saturday afternoon, but the Chinese team could have enjoyed a podium clean sweep had a puncture not deflated the hopes of its #12 Audi.

Martin Rump had converted pole position into a six-second advantage when the R8 LMS GT3 he shares with Weiron Tan was forced to make an unscheduled stop just before the pit window opened. That promoted Sathienthirakul into a lead his co-driver Hamprecht never looked like relinquishing.

Instead, the action raged behind where several crews made headway after the pitstops had cycled through.

Darryl O’Young’s Craft-Bamboo Mercedes-AMG was lying second at half-distance but couldn’t keep pace with the chasing Porsches thereafter. Instead, it was Ye Hongli who continued the good work of co-driver Bo by passing Christina Nielsen soon after the second stint began.

Meanwhile, ARN’s charge from ninth benefitted from a combination of pace and penalties. Hiroaki Nagai and Ben Porter initially enjoyed a great scrap over seventh before AMAC’s Am Cup-classified Lamborghini dropped down the order post-pitstops. Not so Kamimura who hounded Hongli all the way to the chequered flag.

Vutthikorn Inthraphuvasak led the Am challenge throughout the opening stint before pitting from fifth. Co-driver Marco Holzer then did his best to overturn Panther/AAS Motorsport’s 15s Success Penalty but could find no way past the Lamborghini, which finished just 0.7s ahead.

Elsewhere, O’Young and Nielsen slipped to seventh in the final result, one place ahead of TSRT’s Audi driven by David Chen and Andre Couto who also served a five-second Success Penalty.

Behind, erstwhile championship leader MG Choi capped a rollercoaster day by scoring a handful of points, although it could have been so much more for Solite Indigo Racing. The Korean started 21st after crashing in qualifying and was up to seventh by the time the pit window opened after 25 minutes. But an incredible comeback was denied when the team were penalised for unsafely releasing Patric Niederhauser, whose pre-penalty progress had pointed towards a podium finish.

Keita Sawa and Piti Bhirombhakdi’s ABSSA Motorsport McLaren completed the points-paying places, while Rump/Tan battled back from their extra pitstop to finish 11th.

Local team LM Corsa won the Am class thanks to the combined efforts of Kei Nakanishi and Shigekazu Wakisaka.

In GT4 Ringo Chong and Setiawan Santoso made the most of a late race clash to claim their first victory since joining forces at the start of 2019.

The class was turned on its head with 10 minutes remaining when Jean-Marc Merlin made contact with race leader Sunako Jukuchou. The combination of damage and drive-through penalties helped Team iRace.Win’s Ringo Chong and Setiawan Santoso seal victory ahead of Bryan Lee and Tony Fong (GTO Racing with TTR), while Absolute Racing’s Audi shared by Anderson Tanoto and Mark Williamson completed the podium on the team, car and drivers’ GT4 debut.

Craft-Bamboo strikes back on Sunday 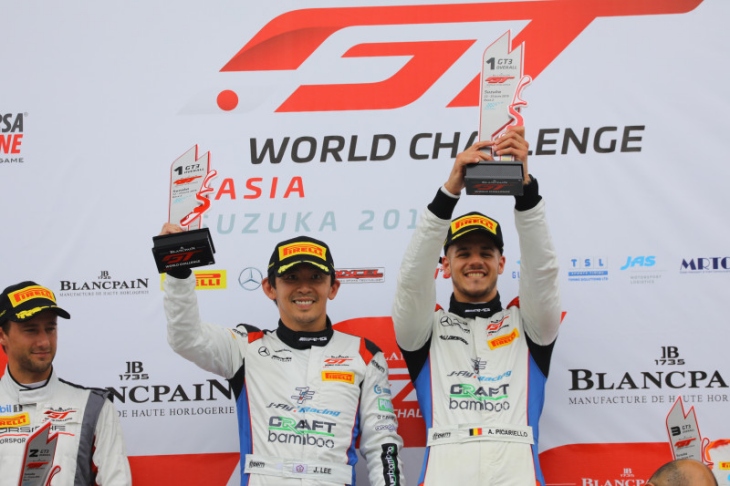 Two Safety Car periods set up the thrilling conclusion to the second race at Suzuka where Jeffrey Lee held his nerve while under intense pressure from Vutthikorn Inthraphuvasak, Tanart Sathienthirakul and Yuya Sakamoto.

The 60-minute encounter began with Alessio Picariello leading fellow front row starter Marco Holzer and Philip Hamprecht into Turn 1. But behind, Kantasak Kusiri’s hopes ended almost immediately when he was spun out of fourth place.

Hamprecht couldn’t keep pace with the duo out front who were seldom separated by more than two seconds. And with neither crew serving a Pitstop Success Penalty, respective co-drivers Lee and Inthraphuvasak resumed 2.5s apart.

Inthraphuvasak’s hopes of challenging were initially thwarted by Yuya Sakamoto who wasted no time passing the Porsche. However, he found Lee a tougher nut to crack and ultimately ran off track at the chicane on the penultimate lap, dropping him to fourth.

That gave Inthraphuvasak just 3.6 miles with which to challenge Lee who remained inch-perfect throughout a tense final lap.

Behind, the two Safety Car periods came as a welcome intervention for Tanart Sathienthirakul who’d dropped to sixth as a result of his and Hamprecht’s 15s Success Penalty. Sakamoto’s mistake ultimately guaranteed their podium place and extended championship lead.

Behind, Sakamoto finished where his HubAuto Corsa co-driver Andre Heimgartner had pitted from despite the attention of Martin Rump whose Absolute Racing co-driver Weiron Tan had run 14th before the pit window. The Ferrari and Audi were separated by just 0.1s at the finish after the Estonian had earlier overtaken four cars in one move through the Esses.

The other Absolute Porsche shared by Chinese duo Yuan Bo and Leo Ye Hongli picked up two places from where it started despite serving a 10s Success Penalty, while Solite Indigo Racing’s MG Choi and Patric Niederhauser once again carved their way through from the back to finish in the points.

Triple Eight’s Mercedes-AMG was also on the move early on thanks to Shane van Gisbergen who worked his way up from 16th to fifth before the pit window. However, the car he shares with Jefri Ibrahim ended its day in the 130R barriers after running inside the top-10 with just moments remaining.

Li Chao and Chris van der Drift joined Lee/Picariello and Inthraphuvasak/Holzer on the Pro/Am podium after finishing eighth, one place ahead of the TSRT Audi that recovered from an early drive-through penalty for jumping the start. Craft-Bamboo’s #99 Mercedes-AMG completed the top-10.

BMW Team Studie’s hopes of winning yesterday’s race were ended by a puncture, but there was no denying Takayuki Kinoshita and Sunako Jukuchou this morning when the Japanese duo converted pole into victory.