After a month away for the traditional break from spring to summer, the Autobacs Super GT Series returns for the fourth round of the 2019 season, and the only fly-away round of the season at the magnificent Chang International Circuit in Buriram, Thailand.

This year will be the sixth consecutive year that Super GT travels to the kingdom of Thailand, but, there is a possibility that this could be the last time that Super GT visits Buriram for the foreseeable future. With the series returning to Sepang International Circuit in Malaysia next season, and with attendance in a steady decline after its 2014 debut, it may be difficult to envision Buriram being back on the calendar in 2020.

Which, honestly, would be a great shame – as the racing here has always been very good to excellent in the five previous visits to Thailand’s modern cathedral of speed. Not just in Super GT, the first major series to race here in October 2014, but also for the other series that race here, including the MotoGP World Championship and Superbike World Championship. It is a modern FIA Grade 1 circuit with virtually no elevation change and acres of tarmac runoff, but one that, with its simplistic layout, flows incredibly well as a high-speed track. And the on-track action, especially in traffic, has been unconditionally excellent, rain or shine.

Sunday’s Chang Super GT Race represents the first leg of Super GT’s unofficial “Summer series” or “Midsummer Triple”. These three races will be perhaps the most gruelling of the season, where the days are the longest, the temperatures will be their hottest, and the Success Ballast handicaps will be their heaviest.

And it starts with a race in the humid, tropical climes of southeast Asia, where temperatures can reach as high as 35°C as they did in 2015. One of only a few respites from the sweltering heat would be the rain, and in this rainy season, there is always the chance that the skies could open and unleash a sudden monsoon – as was the case with just minutes to go before the start in 2017.

So after three races, what is the state of play in GT500? 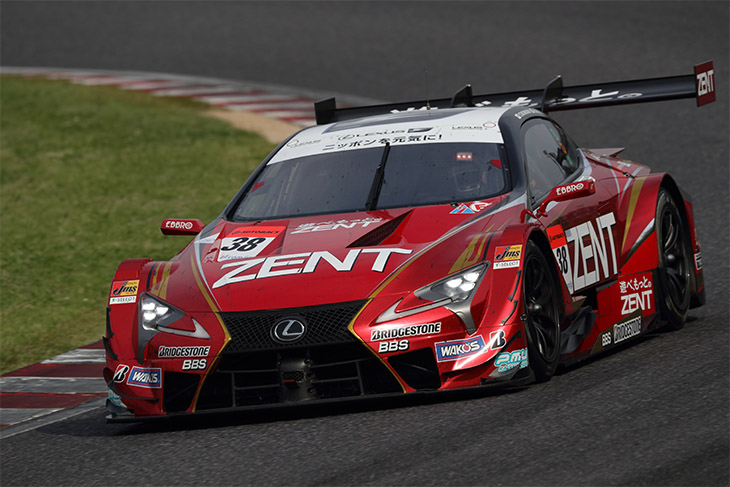 The #38 ZENT Cerumo Lexus LC500 of Yuji Tachikawa and Hiroaki Ishiura currently leads the GT500 points standings after three rounds, boosted by their victory in the Fuji 500km in May. They’ve scored points at Okayama and Suzuka as well, a brilliant start to the season. With that great start, however, comes the offsetting Success Ballast. They’ll be the first team to carry the “Level 1” fuel flow limiter this year, slashing their maximum fuel flow from the default 95 kilograms per hour, down to 91.8 kilograms per hour.

This along with the 36 kilogram weight handicap won’t exactly help their chances of maintaining their hot start to the season, but Tachikawa and Ishiura have more than enough experience to navigate the rough waters of high Success Ballast – and a top five finish will be sufficient to possibly boost their points lead.

What also helps is that, in five previous races, Lexus have won four times in GT500 at Chang International Circuit. That includes the inaugural victory in 2014, a race won by the #36 TOM’s Racing Lexus led by Kazuki Nakajima.

Five years later, Nakajima is now a two-time winner of the 24 Hours of Le Mans and, the first Japanese driver to become an FIA World Champion of automobile racing with his WEC title clinched two weeks ago at Le Mans. The #36 au TOM’s LC500’s retirement at Fuji was a blessing in disguise for Nakajima’s hopes of winning his first GT500 title, because he’s still on equal points with his co-driver Yuhi Sekiguchi despite missing Fuji to race in and win the 6 Hours of Spa. They’re third in the standings after winning the most recent Suzuka 300km. 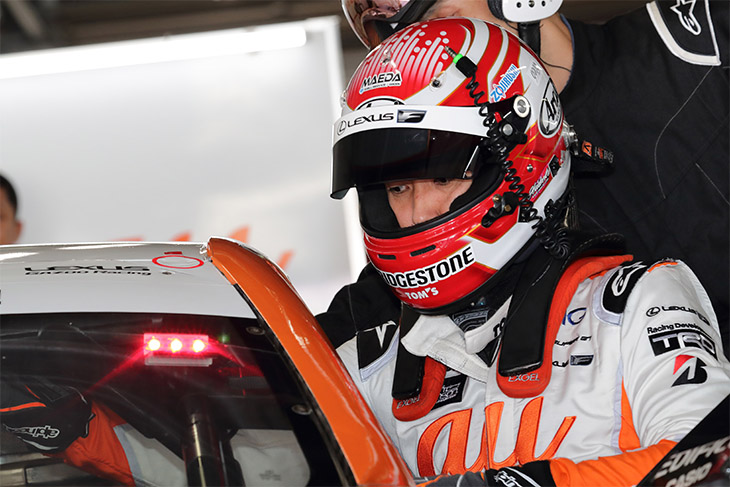 Speaking of Sekiguchi, he scored his first GT500 win here in 2016, and nearly won it again in 2018, before his car ran out of fuel on the final lap, leaving Sekiguchi absolutely heartbroken on the side of the road, contemplating a victory for he and Nakajima that so narrowly escaped his grasp, before falling into the hands of the #39 Denso Kobelco SARD LC500 of Heikki Kovalainen and Kamui Kobayashi. Kovalainen is back to defend his victory, now with Yuichi Nakayama, a previous GT300 class winner at Buriram, in place of Kobayashi.

Ryo Hirakawa and Nick Cassidy won here in their #37 KeePer TOM’s LC500 two years ago, and are still hungry for their first GT500 victory of 2019. The #6 Wako’s 4CR LC500 (Kazuya Oshima/Kenta Yamashita) has scored podiums in three of the five races at Buriram. And of course, Buriram was the site of Lexus Team WedsSport Bandoh’s first GT500 victory in 2016, and their #19 WedsSport Advan LC500 (Yuji Kunimoto/Sho Tsuboi) is a dark horse candidate for victory with a miniscule Success Ballast handicap. Lexus are certainly not short for threats to win in GT500, but their rivals at Nissan and Honda will certainly have a response.

These past two weeks saw a couple of Nissan GT500 stars shine at the Nürburgring 24 Hours: Tsugio Matsuda and Mitsunori Takaboshi scoring a 10th place overall finish for Kondo Racing in their N24 debut! 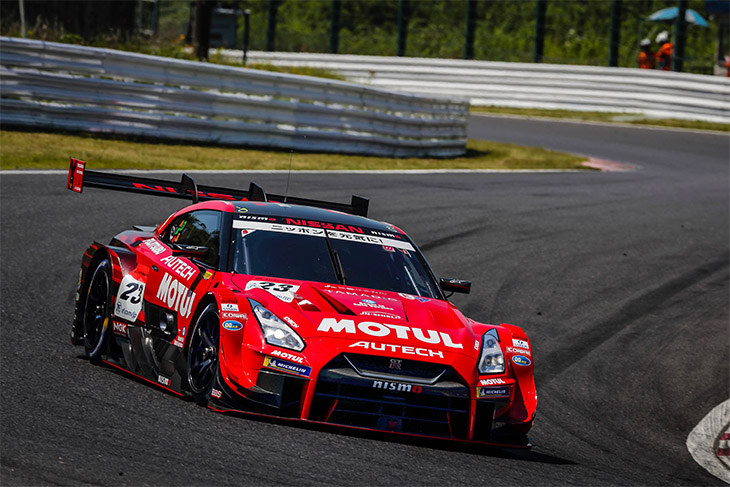 Matsuda, the GT500 career victories leader, returns to the more familiar #23 Motul Autech GT-R alongside Ronnie Quintarelli. They’re second in the GT500 standings, two points back of Tachikawa and Ishiura, after back-to-back second place finishes and pole positions at Okayama and Fuji. But the NISMO team haven’t had the best luck at Buriram – particularly in the last three years after a crash in 2016 and backfires on tyre strategy in ‘17 and ‘18.

Takaboshi, already a GT300 winner at Buriram in 2015, returns to the #24 Realize Corporation Advan GT-R for the aforementioned Kondo Racing team, alongside Jann Mardenborough, who almost won it in 2017. With only 12 kilos of Success Ballast, it could be a day for Kondo Racing’s young and electric tandem to score a victory – but Nissan still have concerns about their performance in the high temperatures, as they’re worried about cooling issues with their quartet of GT-Rs. 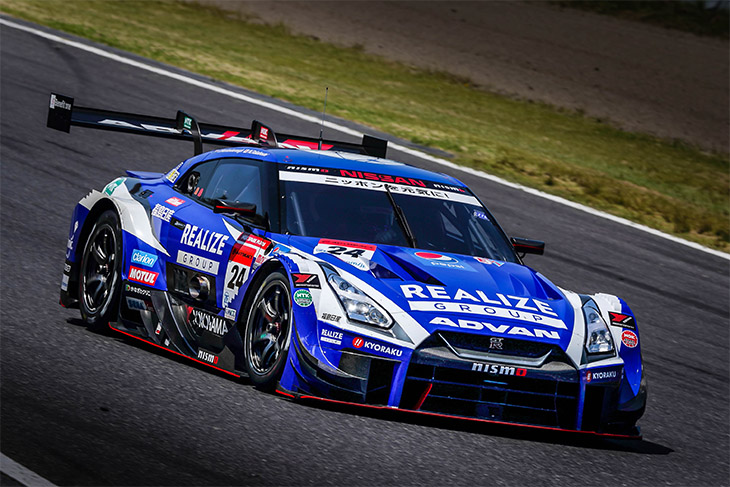 Frédéric Makowiecki isn’t slowing down after 48 hours of racing between Le Mans and the Nürburgring for Porsche – now it’s back to Nissan and the #3 CraftSports Motul GT-R with Kohei Hirate, the other Michelin-clad GT-R showing improved form through three races. And don’t discount the #12 Calsonic Impul GT-R (Daiki Sasaki/James Rossiter) either, on Bridgestones, with Rossiter having won here before in 2014.

Honda, on the other hand, haven’t won here in Buriram. And they struggled in the heat last year. Have the cooling issues of the NSX-GT been fixed to where they can pose a credible threat for victory? 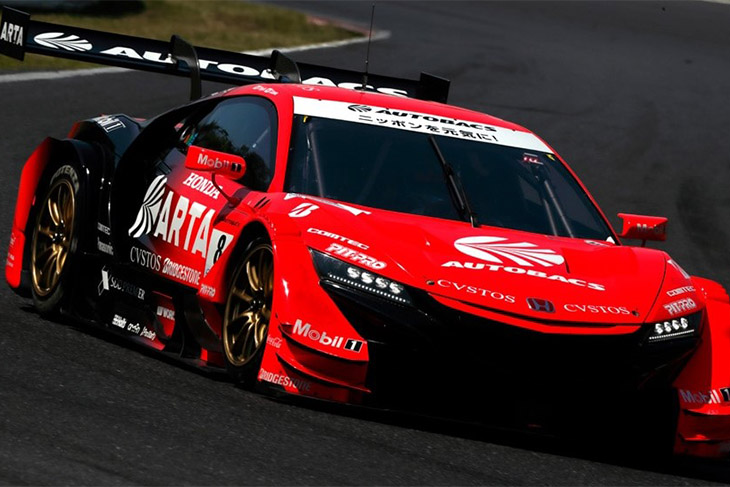 The best of the Hondas is the #8 ARTA NSX-GT of Tomoki Nojiri and Takuya Izawa, winners of the rain-shortened Okayama round, and fourth at Suzuka. The bright orange Honda carries 40kg of Success Ballast weight into Buriram – so perhaps, there may be another credible threat for victory from Honda?

How about the reigning champions, Naoki Yamamoto and Jenson Button? The #1 Raybrig NSX-GT failed to score points in only one race last season, and it was this race. But after a puncture at Suzuka and the crash at Okayama that have deprived them of crucial points, Naoki and JB will be looking at a podium finish or a victory to re-energize their championship defence – certainly, Yamamoto looks up to the task, after blitzing the field at the most recent Super Formula round at Sportsland Sugo this past weekend! 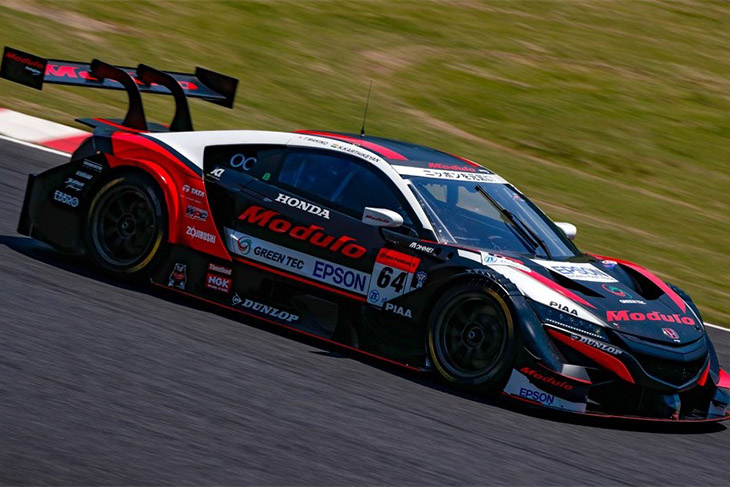 The #17 Keihin NSX-GT (Koudai Tsukakoshi/Bertrand Baguette) runs low on ballast this weekend and Tsukakoshi has scored two podiums in Buriram. The #16 Motul Mugen NSX-GT (Hideki Mutoh/Daisuke Nakajima) might be an underrated pick to excel here, after they took pole position and a top-5 finish in 2018. And don’t overlook the #64 Modulo Epson NSX-GT (Narain Karthikeyan/Tadasuke Makino), with Makino returning to the site of an extraordinary GT500 debut in 2016.

A smaller paddock than any other Super GT venue means a trimmed down GT300 grid at Chang International Circuit consisting of 24 cars. Among the teams that elected to stay home were McLaren Customer Racing Japan, Tomei Sports, and Team Mach – who just took their best-ever finish in Super GT in the last race at Suzuka with a heroic second-place result! There are no local wildcard entries, either. 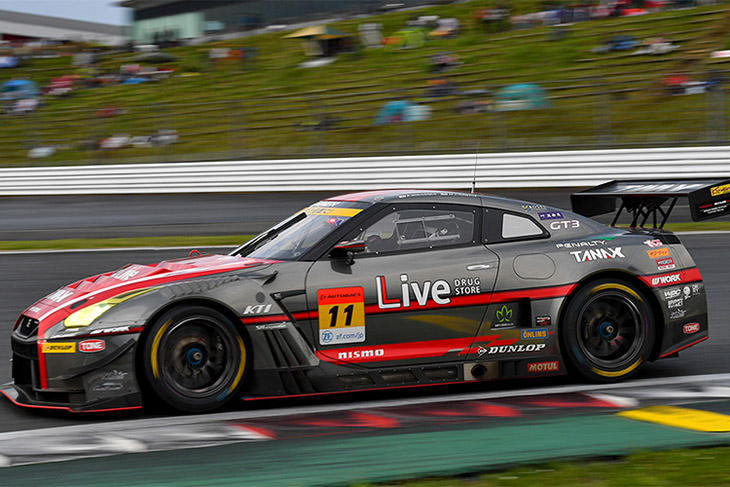 GT3 cars – and in particular, the Nissan GT-R GT3s – have excelled here at Chang International Circuit, with the last-gen GT-R winning in 2014 and 2015, and the current-gen GT-R winning its very first race here in 2018. Last year, it was the #11 Gainer TanaX GT-R of Katsuyuki Hiranaka and Hironobu Yasuda. The number 10 Gainer TanaX triple a GT-R, on the other hand, has an ace up their sleeve in Kazuki Hoshino, a back-to-back winner here in 2014 and 2015.

The top two teams in the championship are the #96 K-Tunes Lexus RC F GT3 (Morio Nitta/Sena Sakaguchi), with wins at Okayama and Suzuka, and the #55 ARTA Honda NSX GT3 (Shinichi Takagi/Nirei Fukuzumi), who’ve finished sixth or better in all three races this season. Both cars are heavy on Success Ballast though, at +60 and +57kg respectively. Don’t count out either crew for a big podium or top-5 finish, though!

Chang International Circuit is a fast track with plenty of fast corners, so handling prowess is at a premium here. In that case, it may be time to look towards the two leading Mercedes-AMG GT3s: The #65 LEON Pyramid AMG of defending GT300 Champions Haruki Kurosawa and Naoya Gamou, and the prior champions, the #4 Goodsmile Hatsune Miku AMG of Nobuteru Taniguchi and Tatsuya Kataoka.

It may also be time to consider cars like the #21 Hitotsuyama Audi R8 LMS (Richard Lyons/Ryuichiro Tomita) and #88 ManePa Lamborghini Huracán GT3 (Yuya Motojima/Takashi Kogure) as threats for a podium or victory – they’ve proven quick so far this season, and if they avoid trouble, they’ll be right up there in the fight. The #60 Syntium LM Corsa RC F GT3 (Hiroki Yoshimoto/Ritomo Miyata) could be one to watch as well, they finished 3rd last year on Yokohama tyres, this year, they’re running with Dunlop tyres. 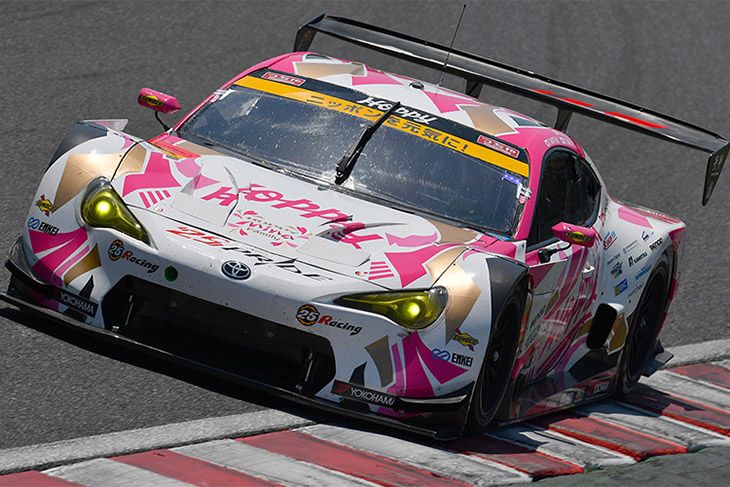 While GT3s have had an overwhelming advantage in race victories, it’d be unwise to totally count out some of the Mother Chassis cars. After all, the platform did make its debut here at Chang in 2014. The #25 Hoppy Toyota 86 MC of Takamitsu Matsui and Kimiya Sato, for instance, is a car that’s won here before in 2016 – and after just narrowly losing out on a first podium of 2019 at Suzuka, they’ll be motivated to atone for their last-lap heartbreak. The #52 Saitama Toyopet GreenBrave Toyota Mark X MC (Shigekazu Wakisaka/Hiroki Yoshida) is a car that’s being tipped for success this weekend on their Bridgestone tyres.

The #61 Subaru BRZ R&D Sport (Takuto Iguchi/Hideki Yamauchi) is a JAF-GT300 original that’s had the pace here, but never the reliability, and while the #31 Toyota GR Sport Prius PHV apr GT (Koki Saga/Yuhki Nakayama) turned a corner at Suzuka, the new front-engined Prii are still a step away from contending for wins at its current state. 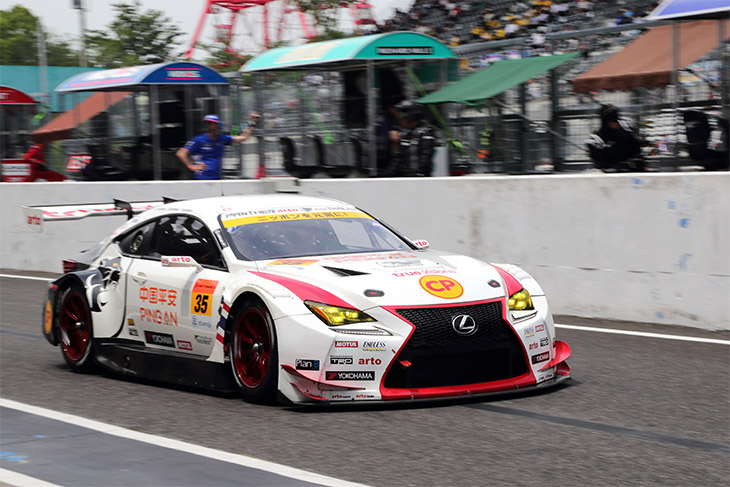 But of course, there will be a sizeable portion of teams cheering on Thailand’s own entry, the #35 arto RC F GT3 of Panther arto Team Thailand, and local hero Nattapong Horthongkum (himself also coming back from his and Toyota Team Thailand’s annual venture to the ‘Ring) and Sean Walkinshaw. What better place than here at their home circuit, for the Arto RC F to score its first top-ten finish as a full-time entrant?

A later start time than usual is in the works for Sunday’s 66-lap Chang Super GT Race in Buriram, Thailand. 3 PM local time in Thailand, which translates to a 5 PM start time in Japan for those watching on the J Sports family of networks; 9 AM in the UK & Ireland, 10 AM throughout continental Europe, and 4 AM, bright and early on the east coast of the US (1 AM Pacific!)