This weekend is set to be a big one for the IMSA WeatherTech Sports Car Championship at Watkins Glen, the New York circuit playing host annually to the third Endurance Cup round. But for the Michelin Pilot Challenge, it’s a critical weekend too, the series back in action for a fourth time this year, with another exciting race in prospect that could be pivotal for the title races in both classes.

GS will as ever get the most attention, and rightly so. The 24 GT4 cars on the entry will do battle once again, though this time using the new Michelin S9M tyres for the first time. GS has two specs of tyres for the season, and for the next five races, the harder of the two compounds is the rubber of choice.

The S9Ms will be more durable and suitable in the hot weather. While the forecast doesn’t predict temperatures quite as high as last year, it will still pose a challenge for the drivers this time around.

So after three races just who are emerging as contenders? The #69 Motorsports In Action McLaren of Jesse Lazare and Corey Fergus leads the points tally by two points despite a seventh-place finish at Mid Ohio, the Canadian outfit leading BimmerWorld Racing’s #82 BMW M4 GT4 of James Clay and Devin Jones. 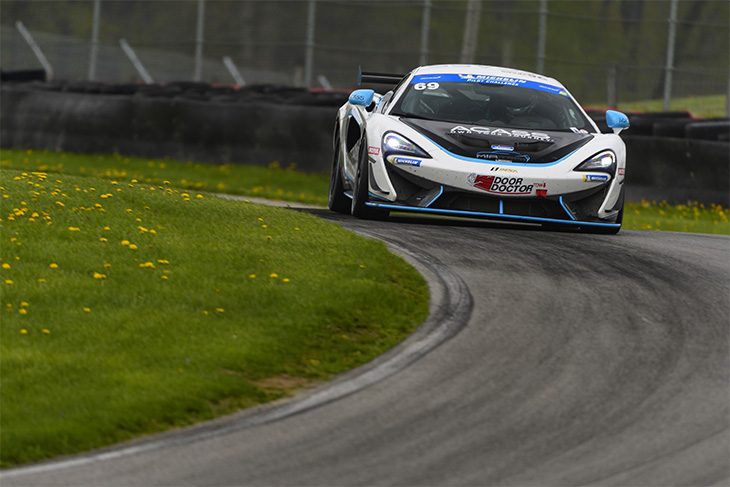 The third-place Carbahn Audi of Tyler McQuarrie and Jeff Westphal is also very much in the fight too, a further two points adrift after a win at Sebring and a podium at Mid-Ohio.

“We knew coming into this year, that we need to focus on the championship if we want to win it,” Lazare said to DSC. “We’re doing the best we can to score points and stay consistent, we have the championship in mind over winning the odd race.

“Each track has a unique topic, Watkins Glen is a big one. They repaved it a few years back so it’s extremely smooth, but it’s still fast and hard on the brakes and tyres due to the heat. It’s a real flowing track. But I think the 570S GT4 will do well here this weekend.

“I think because of the heat the naturally aspirated cars may struggle a bit, that’s the Mustang, the Audi, the Porsche. The turbo cars, because they always produce the same horsepower, won’t lose anything to the heat, so I think the Mercedes, BMW and McLaren will be strong here.”

Last time out MIA ran its 570S GT4 with the 2019 upgrade kit, which features improved electronics and traction control systems. The team hopes that in the remaining rounds of the championship the refined 570S GT4 can keep it in the title fight.

“The new package is really good, really consistent. Before the car wasn’t consistent, now we’re getting the same power from session to session, it’s easier to tune now,” Lazare explained.

“It’s better for the tyres too, as I know the car will give me the same power through each corner, the traction control also helps the tyres not overheat in the rear. 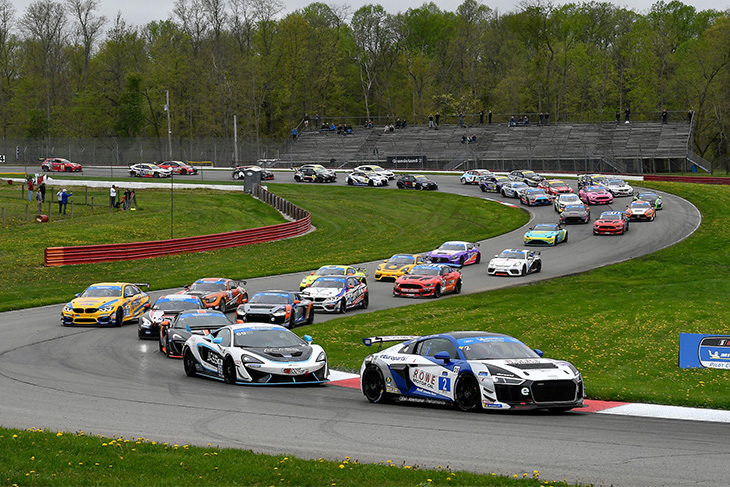 “As for the new tyres though, we only had one run on them at Road Atlanta last year. We haven’t been able to test them at Watkins Glen, we came here a month ago but it rained. But I’m sure we’ll be able to get it nailed.”

BimmerWorld hopes to head home after the race with the championship lead though after a challenging run at Mid-Ohio in changeable conditions cost it valuable points at a circuit it felt would suit the characteristics of the M4 GT4.

It’s not going to be a simple meeting though, especially for James Clay, who will be taking on the challenge of the 97th Pikes Peak International Hill Climb and Pilot Challenge round at Watkins Glen on the same weekend! 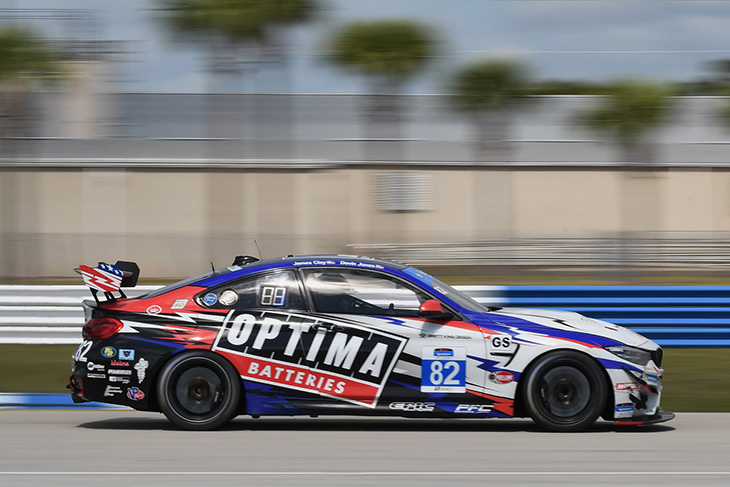 Clay, the owner of BimmerWorld, will race at Watkins Glen, and drive a second BMW M4 GT4 up the iconic mountain, commuting between the two events during the week. It’s a logistical task that’s been in the works for over a year.

“I’ve been out in Colorado Springs for Pikes Peak, we tested last weekend and have been on the mountain since Monday,” he told DSC. “We are running an M4 GT4 in both, though the one for Pikes Peak will not quite be the same spec. The BMW wasn’t the car we planned to bring to the mountain, but we had one in the shop and I love the continuity.

“It was hard to plan, but where there’s a will, there’s a way. It’s not taken any private flights or anything to make it happen, which is great.” 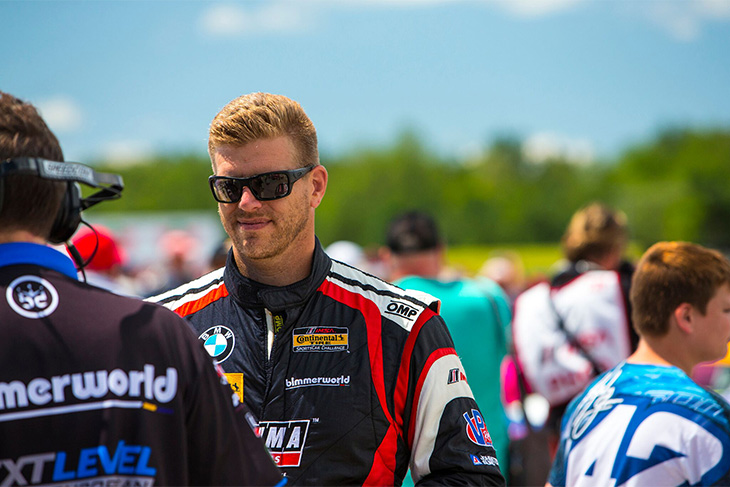 So this week James will hit the mountain on Tuesday, Wednesday and Thursday, skip Friday’s practice session to head to Watkins Glen, then head back to Colorado during the Pilot Challenge race on Saturday for the big day on Sunday. To do well in both will require an iron-man effort.

“After two hours of the Pilot Challenge race, I’ll hop out of the car and scramble to the airport and cheer on Devin from afar. It’s an important weekend in Pilot Challenge, Mid-Ohio’s results closed the field up in the standings. We’ll be pushing on and see where we are a few races at the end.

“I don’t know if we’ll be at the front this weekend, but Watkins is a good circuit for BMW, despite the fact that I feel we don’t have the best level of downforce. We’ve tested the new tyre though and it seems to be rock solid, it suits the car well, I think that’s something we can lean on.”

This weekend could be a crucial one for the TCR class too at ‘The Glen’, the lead in the points for the #37 LA Honda World Racing Civic of Shelby Blackstock and Tom O’Gorman down to 14 points. 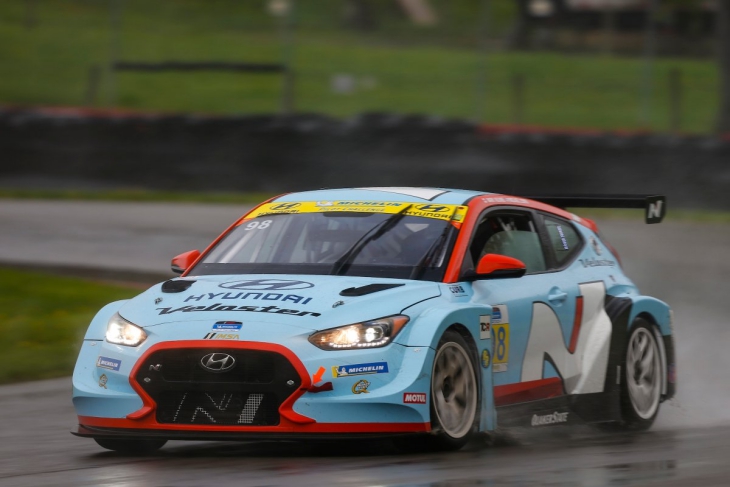 Two wins to start the season put the duo in control, but a fifth-place finish at Mid-Ohio and a win for the #98 Bryan Herta Autosport Hyundai has reduced the deficit for Mark Wilkins and Michael Lewis. The #12 eEuroparts.com Audi is also in the hunt after a podium in the previous round.