It doesn’t look as if Lexus is ready to relinquish their control over Chang International Circuit in Buriram, if the results of Saturday’s qualifying for the fourth round of the Autobacs Super GT Series are any indication.

Lexus LC500s locked out the front row of the GT500 class and took four of the top five positions on the grid for Sunday’s 66-lap Chang Super GT Race, with the #6 Wako’s 4CR LC500 of Kazuya Oshima and Kenta Yamashita set to lead the field to the green flag as Yamashita set a new track record around the 4.554 kilometre circuit.

As expected in the first race of Super GT’s informal “Summer Series”, the heat was on in qualifying with air temperatures as high as 33°C by the time qualifying began at 3:00 PM local time.

But the top two teams in the championship standings, each loaded down on Success Ballast, each failed to advance. The #38 ZENT Cerumo LC500 (Yuji Tachikawa/Hiroaki Ishiura) would have had a tough time advancing under the duress of a “Stage 1” fuel-flow limiter, but a rare error from the veteran Tachikawa on his attacking lap ultimately cost them in the end – they’ll start 15th and last on the GT500 grid.

The #23 Motul Autech NISMO GT-R (Tsugio Matsuda/Ronnie Quintarelli) missed out and will start 10th, behind the #12 Calsonic Impul GT-R (Daiki Sasaki/James Rossiter) which came into this weekend with a new engine following a catastrophic failure at Suzuka. Also failing to advance was the #17 Keihin NSX-GT (Koudai Tsukakoshi/Bertrand Baguette), running with a new monocoque in 12th, and last year’s pole-winning car, the #16 Motul Mugen NSX-GT (Hideki Mutoh/Daisuke Nakajima), only 13th.

Times from Saturday morning Free Practice suggested that a new lap record could be established, and in Q2, the battle was well and truly on. Teams waited until a quarter of the way through the 10-minute session before starting their qualifying runs.

Then all the action started happening in the final two minutes. Kazuki Nakajima, the two-time and defending Le Mans 24 Hours winner and newly crowned FIA World Endurance Drivers’ Champion, was the first to threaten for pole position in his #36 au TOM’s LC500, with a 1’23.457. Yuji Kunimoto, winner of this race in 2016, took the #19 WedsSport Advan LC500 to the top with a 1’23.350, just 0.009 seconds back of Mutoh’s lap record from 2018.

But with a few seconds left, Yamashita in the #6 Wako’s LC500 took a tenth of a second out of the lap record, and with a best lap of 1’23.260, wrapped up his first career pole position in the premier class of Super GT, and the first for Lexus Team Wako’s LeMans since July 2016, at Sportsland Sugo. Yamashita scored his first GT500 podium here last summer, and Oshima has led the number 6 Team LeMans crew to podiums in three of the last five races at Buriram.

The #19 WedsSport LC500 of Kunimoto and Sho Tsuboi starts 2nd. The Yokohama runners are tipped to fare well here during the race, with the #24 Realize Corporation Advan GT-R (Mitsunori Takaboshi/Jann Mardenborough) qualifying in 6th position.

The #3 CraftSports Motul GT-R (Kohei Hirate/Frédéric Makowiecki) backed up their pace in practice by qualifying 3rd, ahead of the two TOM’s LC500s, the #36 au TOM’s LC500 of Nakajima and Yuhi Sekiguchi in 4th, and the #37 KeePer TOM’s LC500 (Ryo Hirakawa/Nick Cassidy) in 5th. The best two Hondas will line up on Row 4, led by the #1 Raybrig NSX-GT of Naoki Yamamoto and Jenson Button, ahead of the #8 ARTA NSX of Nojiri and Takuya Izawa.

Lexus/Toyota will be trying for their fifth win in Buriram in sixth races, having now taken their fourth pole position in GT500 in as many races.

Over in GT300 qualifying, a truncated grid of 24 cars would fight for just 16 spots to get through from Q1 to Q2. The contingent of home fans were pulling for the #35 arto Lexus RC F GT3 of Nattapong Horthongkum and Sean Walkinshaw to make it to the battle for pole position, but even with Walkinshaw’s best efforts, Panther arto Team Thailand were unable to make the cut in a highly-competitive Q1 session, and will start 21st. 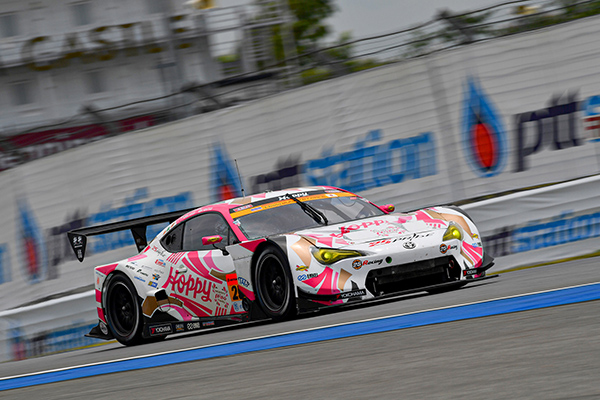 Also, the #52 Saitama Toyopet GreenBrave Toyota Mark X MC (Shigekazu Wakisaka/Hiroki Yoshida) stopped at the side of the track in Q1 and failed to advance to Q2, as did both Toyota GR Sport Prius PHV apr GTs.

Nissan, however, looked strong in Q1, with French-Argentine rookie Sacha Fenestraz taking P1 in the session aboard the #56 Realize Corporation/Nissan Gakuen GT-R NISMO GT3, and all four Nissan GT3 customer teams inside the top 5 in the session.

In Q2, 16 cars battled for pole position, but nobody could match the pace of the #25 Hoppy Toyota 86 MC of Takamitsu Matsui. With his first flying lap, Matsui took P1 with a time just shy of his own lap record from 2016. Then he obliterated it with a record time of 1’31.839, to put Tsuchiya Engineering on the pole position for the second time this season, in consecutive rounds!

It’s the team’s third pole position at Buriram in the last five years and the sixth for Matsui in his Super GT career. And for Tsuchiya Engineering, whose future was in doubt just a month or two ago, another morale-boosting result for the privateer team based out of Fujisawa.

The #56 Realize GT-R GT3 starts second with Kazuki Hiramine putting in a great run in Q2, and with their best qualifying result of the season, the #7 D’station Aston Martin Vantage GT3 of Tomonobu Fujii and João Paulo de Oliveira starts third!

The current points leaders, the #96 K-Tunes Racing Lexus RC F GT3 of Morio Nitta and Sena Sakaguchi, will have to try and come back from 15th on the grid for tomorrow’s race.