Harry Tincknell brought the #55 Mazda RT24P DPi home to a first win for the Mazda Team Joest DPi effort at Sahlens 6 Hours of the Glen today, leading home a 1-2 finish for the brand.

The big win for John Doonan’s fan-favourite programme followed a dominant day for the Mazdas which came down to a fight with the #6 Acura Team Penske ARX 05 driven by Juan Pablo Montoya. The lead Acura had been close to being lapped but profited from a late race yellow leapfrogged the Mazdas in the penultimate stop.

Montoya then played a defensive game and held off the Mazdas for 20 minutes before Tincknell toughed his way by and pulled away easily, the Mazdas far faster all day, this despite the #55 having the left side engine cover peeling back in the closing minutes.

Oliver Jarvis in the #77 Mazda made the pass on Montoya for second in the pits in the final scheduled stops, Jarvis to, pulling away from the #6 once clear to secure a 1-2 finish for the team. 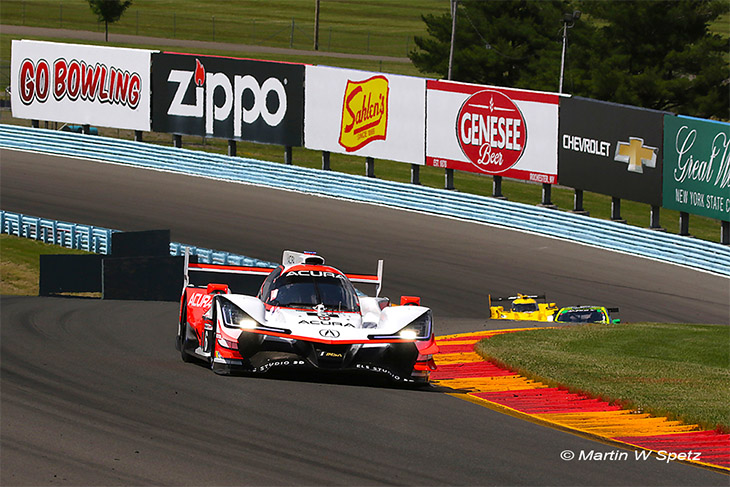 There was late drama though, the leading Mazda’s engine cover coming loose. Thankfully though it didn’t effect Tincknell’s pace, and the team didn’t have to pit the car for repairs.

The Briton led home Jarvis, scoring the team a historic result, after so many near misses over so many years.

“It’s a Mazda day, we’ve been trying to this for our fans, it’s been such a long journey,” Mazda programme boss John Doonan said to IMSA Radio. “So many people have touched this car. This is for our Mazda fans, our Mazda dealers, employees.”

Jonathan Bomarito, who along with Tincknell and Olivier Pla drove the winning car, added: “We had a good feeling about today. This feels so amazing, Harry drove fantastically. This is everything to us, it’s a 1-2, an incredible team effort.

“We needed this for Mazda, Just looking at John and the emotions. I can’t explain it, it’s been so long, so many ups and down. But we did it. We hung on for the win.”

Despite coming close, crossing the line second, on a day that saw Mazda dominate on pace, Oliver Jarvis said he was still incredibly proud of the result and the team’s effort in scoring the 1-2 finish.

“The end was easy, the last 10 laps we were cruising and playing rear gunner,” he said. “This was a team effort, the #55 was in victory lane but this felt special. I’ve come here to race wheel-to-wheel and we had that today. The important thing is Mazda got that win, it’s a monkey off our back, it takes the pressure off. We have to do it constantly now.”

Just off the podium, the #10 Wayne Taylor Cadillac finished fourth and led home the #7 Acura.

This year’s IMSA race at Watkins Glen was certainly a memorable one because of the result, but up front it was far from a classic.

On pace it was Mazda’s day, but clever pit strategy from Penske, caution periods and a sequence which saw Joao Barbosa in the #5 Action Express Cadillac hold up both Mazdas for an extended period to prevent himself from going two laps down kept it close.

In the end though, it was a (relatively) comfortable formation finish for the Japanese marque.

Behind the result had a big effect on the championship standings. With a third place finish in the #6 Acura, Juan Pablo Montoya and Dane Cameron have taken the lead in the points. The duo are now a single point clear of full-season #31 AXR drivers Pipo Derani and Felipe Nasr who finished a disappointing seventh after a puncture at the start of the race cost the team valuable time.

Plenty of other runners hit trouble in the DPi class too, the JDC Miller Cadillacs both having spins and the Juncos Caddy and CORE Nissan dealt penalties for passing a red light in pit lane before the Nissan lost drive and retired.

In LMP2, the race was decided by an incident, PR1 taking a victory almost by default after the Performance Tech ORECA spent time behind the wall. 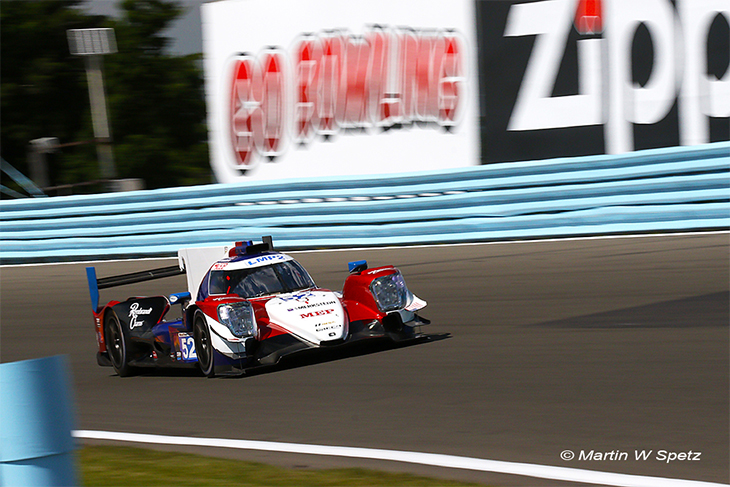 The Performance Tech example came into the Bus Stop too hot with Andrew Evans at the wheel. He hit the #912 Porsche into a spin, resulting in a second collision, the #25 Team RLL BMW colliding with the ORECA, forcing the car in for repairs.

It was, therefore, a simple win for Matt McMurry, Gabriel Aubry and Eric Lux in the #52.

In GTLM Nick Tandy took the win in the #911 Porsche from the surviving #3 Corvette and the #67 Ford. Tany had to fight to the flag, after Antonio Garcia reeled in the Briton in the final hour and put the pressure on in the final few laps. 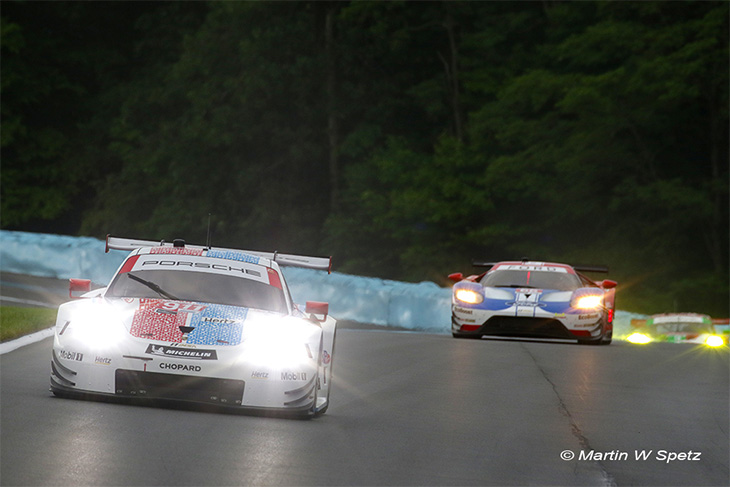 “It feels great,” said Tandy’s co-driver Pilet. “It was one of the big ones we’ve missed with Nick. We had so many issues, in FP1, FP2, the Warm-Up, but we didn’t give up. The guys did so much work, after Le Mans because they haven’t had much rest and there were so many issues.”

The win adds to Porsche’s list of IMSA wins this year, Tandy and Patrick Pilet extending the German brand’s win streak in GTLM to four in a row, the duo’s last win back at Sebring in March.

“It’s perfect, it’s what we planned for,” Tandy added. “We tested here, did a lot of work, and the strategy that got us in front. We didn’t have the fastest car but won again, the car was great at the end of the race. We finally won at the Glen.”

The sister Porsche meanwhile, was involved in an accident at the start which cost the #4 Corvette and #33 GTD class Riley Mercedes dearly.

In what was a cruel blow for Corvette, the #912 Porsche came into contact with the #4 Vette, sending Tommy Milner into a spin which collected the Riley Mercedes. It meant that the #4 C7.R, which was a spare chassis for the weekend after Marcel Fassler’s shunt at Le Mans, was damaged significantly just days after it was built up for service.

The #25 Team RLL BMW M8 also had a tough time, the car involved in the incident with the Performance Tech ORECA which caused it to pit for repairs when the engine cover came loose late in the race. That stop would mark the end for the car, a fuel fire forcing it to retire. A huge disappointment for Tom Blomqvist and Connor De Phillippi who were a real contender early on.

The team’s other M8 ended up finishing fifth, a lap off the lead.

In GTD the Starworks Audi led into the final stages but needed a caution to help Ryan Dalziel’s fuel-saving plan. 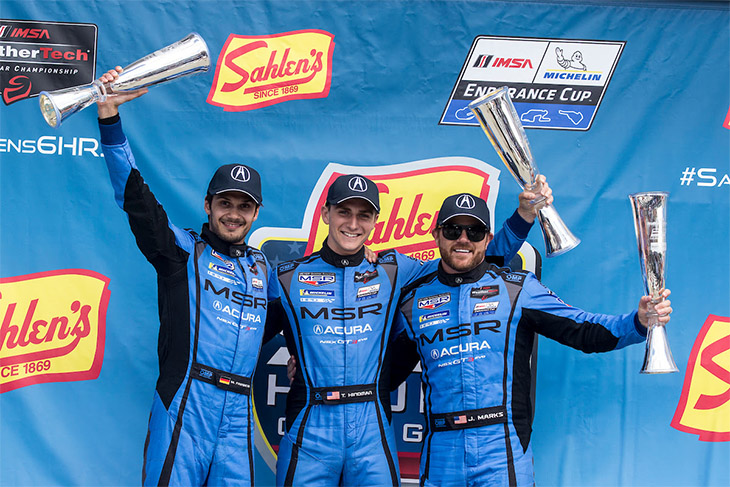 The yellow period wouldn’t come and the win went to the Championship-leading #86 Meyer Shank Acura NSX GT3 Evo, Mario Farnbacher (who shares the car with Trent Hindman and Justin Marks) taking the class lead with 16 minutes to go, ahead of the #96 Turner Motorsport BMW M6 GT3.

Bill Auberlen pushed the Acura right to the checkered flag but couldn’t get past. Thus, the Acura customer team scored its first win of the season and in the process, extended its lead in the Team’s Championship to 16 points.

“Trent, Justin and Mario all drove great today,” said Michael Shank, team owner. “Mario just drove an incredible race at the end there especially with the pressure of the BMW on the final laps.

“We have been knocking at the door of a win all season and we finally got it. The 86 crew guys did an amazing job with pit stops and strategy today. This GTD category is one of the most competitive categories and it’s really anyone’s race to win, so it makes the victory extra special.”

The #63 WeatherTech Ferrari of Toni Vilander, Cooper MacNeil and Jeff Westphal completed the podium after a nose-to-tail battle to the flag with the #57 Acura which came home fourth.

“Other than to the Acura and BMW we had great pace,” MacNeil said.

“To those other two cars, we were in a different class. That’s racing, so we have to take what it gives us and regroup.

The good news is the car is in one piece because we literally have a race in seven days with the same race car. That was huge because this place isn’t always so easy to leave unscathed. But another third-place finish with Jeff and Toni in the car after our third-place finish at Sebring.

“All in all a good weekend for Scuderia Corsa and the WeatherTech crew and Ferrari as well. We’re the only Ferrari here representing the brand pretty well on the podium I’d say.”

The first of the Aim Vasser Sullivan Lexus RC F GT3s, the #14, completed the top five.