Part 4 of this short series that looks back on the five decades of IMSA history examines ten years that divided the sport in North America, divisions in alliances and philosophies saw the era of ALMS vs Grand-Am

Sports car fans were caught up in a similar argument at the dawn of the new millennium, and the two Florida endurance classics at Daytona and Sebring found themselves on opposite sides of the argument. Should they opt for great cars, particularly the ones that compete annually in the 24 Hours of Le Mans, or concentrate on great competition?

The split originally began in 1998, when Daytona International Speedway opted to go with a new sanctioning body for the Rolex 24 At Daytona, the USRRC. Sebring remained with Professional Sports Car Racing for the Mobil 1 Twelve Hours.

For a year, it was a case of different sanctioning bodies using similar cars, in fact, the same Ferrari 333SP of Gianpiero Moretti, Didier Theys and Mauro Baldi (along with Arie Luyendyk at Daytona) won both classics in 1998. At the end of the year, though, new Road Atlanta owner Dr Don Panoz held an event themed on capturing the flavour of the French endurance classic, a 1,000-mile race titled “Petit Le Mans.”

Pleased with the success of that event, Panoz shared his vision with the new owners of Professional Sports Car Racing, who opted to rename its full season the American Le Mans Series, using rules based on those of the Auto Club de l’Oeust (ACO), used for the French event. Within a few years, Panoz purchased the organization and brought back IMSA to sanction the series.

The move paid immediate dividends for Sebring. In 1999, a BMW V12 LMR driven by J.J. Lehto, Tom Kristensen and Jorg Muller won at Sebring and a similar prototype won that year’s Le Mans classic. This marked the first time since 1967 (when Mario Andretti and Bruce McLaren won in a Ford GT40 Mk IV) that the Sebring-winning model did not compete in the Rolex 24. It also began a streak that would finally come to a close with the 2014 Mobil 1 Twelve Hours of Sebring. 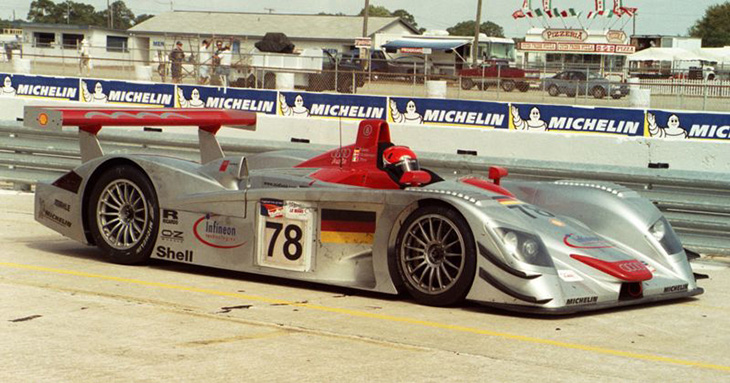 In 2000 and continuing for the next six years, an Audi R8 prototype drove to victory at Sebring, finishing 1-2 each time. The Audi R8 gave way to the Audi R10 TDI in 2006, with Kristensen chalking up Sebring victory number five. That Audi repeated in 2007, with four-time winner Frank Biela joined by Marco Werner (three-time winner) and Emanuele Pirro (two victories). 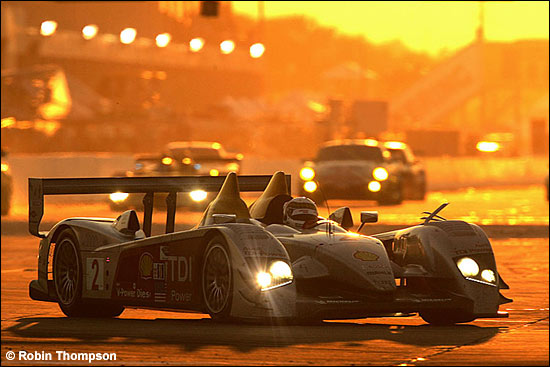 Audi’s streak was snapped by Penske Racing in 2008, won by the Porsche RS Spyder of Timo Bernhard, Romain Dumas and Emmanuel Collard. Dyson Racing made it a 1-2 finish for RS Spyders with Butch Leitzinger, Marino Franchitti and Andy Lally. 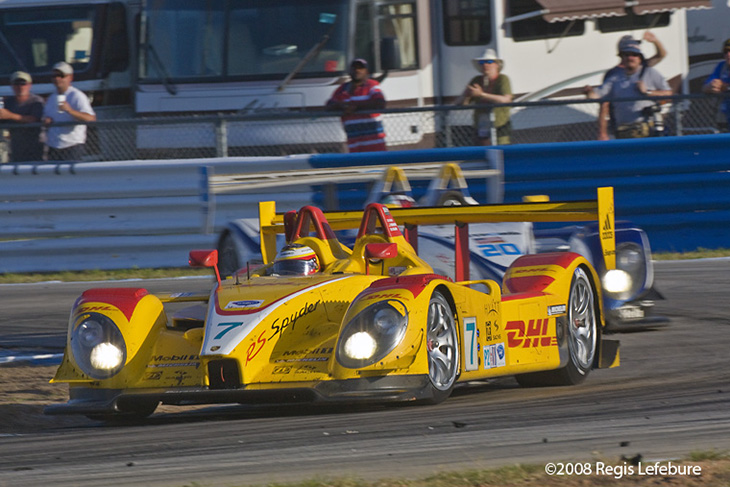 Kristensen, Allan McNish and Dindo Capello returned Audi to victory lane in 2009 in an Audi R15 TDI, before Peugeot put together a two-year streak with the 908 HDI FAP in 2010-11. 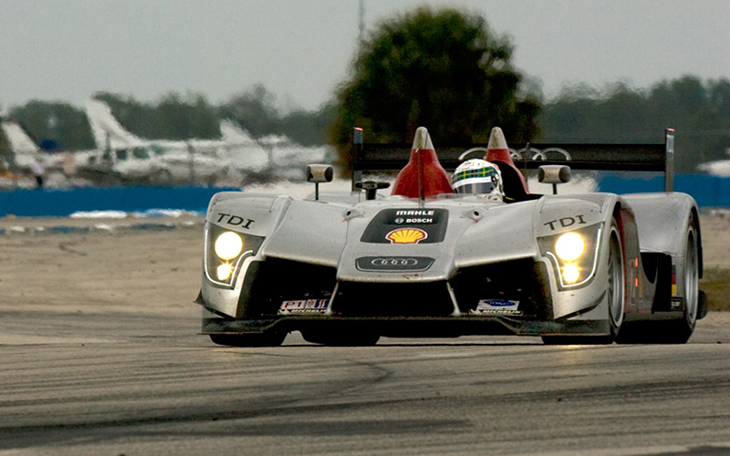 Kristensen and McNish returned Audi to the top of the podium in 2012 in an R18 TDI, while Oliver Jarvis was joined by Marcel Fassler and Benoit Treluyer in winning the 2013 race in an R18 e-tron Quattro.

Daytona ran the Rolex 24 under USRRC sanction in 1998 and 1999, with that series folding only three races into the 1999 campaign. Putting together the pieces of the failed USRRC, Jim France (son of NASCAR founder Bill France Sr.) assembled a team of 25 investors to realize his vision of a new American sports car series. With goals of capping costs, maintaining close competition and returning racing to the fans, GRAND-AM Road Racing was formed.

The GRAND-AM Rolex Sports Car Series debuted with the 2000 Rolex 24 At Daytona. While cars in the lead SRP class failed, a battle resulted between the GTS class factory-backed Dodge Viper and Corvette. The Viper prevailed by only 30 seconds, the closest finish in the history of the event at the time. 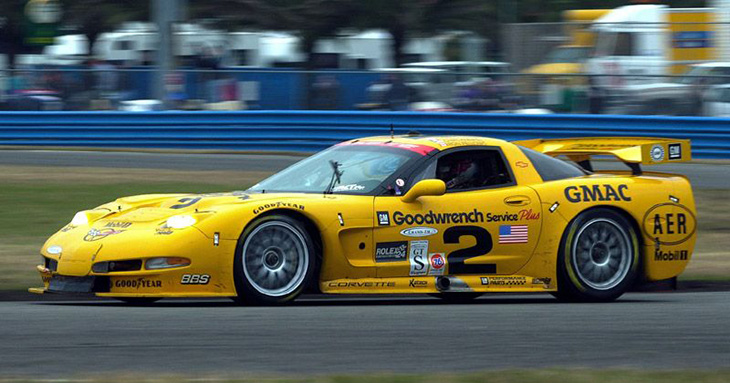 The following year, Corvette won when the SRPs again failed. Ron Fellows. Johnny O’Connell, Chris Kneifel and Franck Freon drove the winning car and were joined in victory lane by the team’s sister car, the third-place GTS-class Corvette of Dale Earnhardt and his son Dale Jr., along with Andy Pilgrim and Kelly Collins.

Concerned with the lack of success of the lead class, France met with Brumos owner Bob Snodgrass and his associate, five-time Rolex 24 winner Hurley Haywood. Over dinner, they sketched a proposed race car, based on the Ford GT40 of the 1960s, that would be fast, safe and affordable. Fabcar’s Dave Klym brought the idea to life, and the new Daytona Prototype (DP) was announced on the eve of the 2002 Rolex 24 as GRAND-AM’s lead class beginning in 2003. 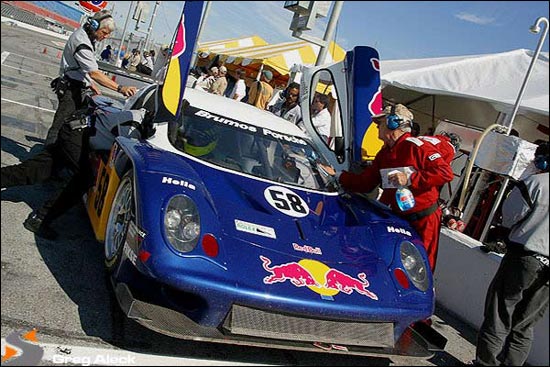 Six DPs were on the grid for the 2003 Rolex 24, including a Porsche-Fabcar for Haywood and JC France in the traditional Brumos colours. While the new cars had teething problems, a GT-class Porsche fielded and co-driven by TRG’s Kevin Bucker won overall, the DPs quickly gained traction. Only one year later, 17 DPs were on the grid. 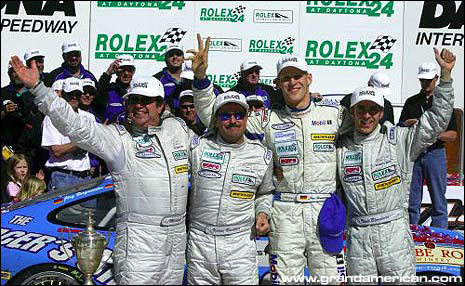 NASCAR Cup Series champion Tony Stewart held a three-lap lead with only 43 minutes remaining when he pitted with rear suspension problems. After his team made repairs to his Chevrolet-powered Crawford, Stewart returned with a one-lap lead. For a half-hour, it seemed that Stewart might be able to nurse the car home. But suddenly, with 17:45 remaining, the car suddenly veered right before the chicane, and his race was over. Defending DP champ Terry Borcheller was joined by Pilgrim, Christian Fittipaldi and car owner Forest Barber in the winning Bell Motorsports Pontiac Doran. 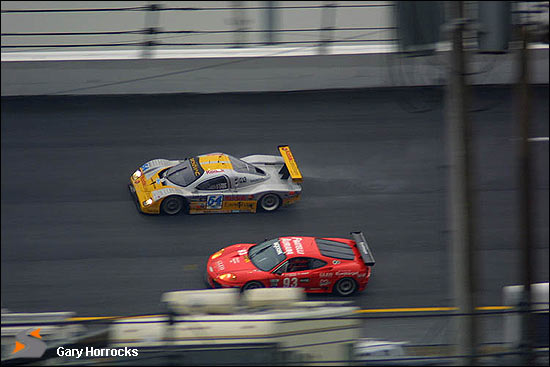 That set the tone of the racing at Daytona for the following nine races. Large DP fields with as many as 29 cars, with the series regulars joined by familiar names from NASCAR, IndyCar and international sports car racing, even Formula One. Chip Ganassi Racing won five of the events, four with sports car veteran Scott Pruett at the wheel. 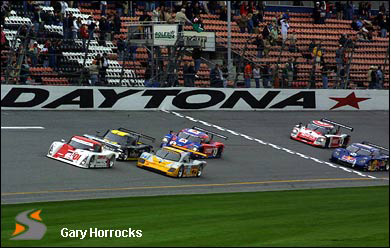 It was great racing, but missing some of the great cars and glamour of international competition. France and Panoz got together to discuss unifying North American sports car racing and shook hands on a merger in September 2012.

Words from IMSA, Pics from DSC and racingsportscars.com